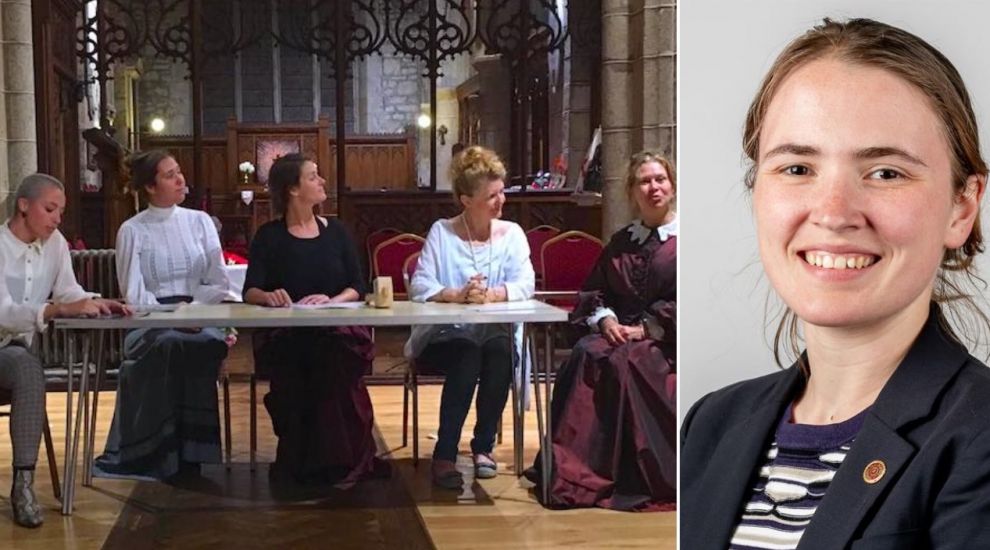 A surrealist duo, a doctor, a writer, a business woman and a political activist walk into a theatre… What happens next? That’s the subject of a politician's debut play which opens tonight.

From drama school to the classroom and now the States Assembly, Deputy Jess Perchard is channelling her advocacy for equality into her debut play featuring the long-lost stories of Jersey’s most important female pioneers.

Taking place at the Opera House, ‘(Un)Forgotten Figures’ aims to bring the contributions of six 19th century Jersey women to life in a creative retelling of Jersey’s history.

In the hope of salvaging stories of Jersey women lost in the mists of time, Deputy Perchard's play focuses on:

How have you found your debut in playwriting?

“I was actually really excited about it. So, I’ve done bits and pieces of writing before when I was at drama school… but I’ve always been into writing. I actually just relished the challenge of doing something in a new format.

Pictured: The play will go before a public audience for the first time tonight.

“I was very keen to ensure that it was engaging. I think when you’re writing about real historical figures, it can be very tempting to just cram your work full of facts… It was quite a process taking something factual and making it engaging whilst also retaining the truth of the characters.”

Where have you sourced your research on these women from?

“It’s a really good question because obviously the whole point is [that] their stories aren’t told and they’re not recorded and we need to remember them. So, in a sense it was very fun trying to find information on them because they’re not very well-documented.

“I got a lot from Jersey Archive which is an excellent resource particularly for characters like Claude Cahun, but I actually ended up having to dig around to try and find quite obscure or not obvious sources.

Pictured: Some of the women who will be in the spotlight in Deputy Perchard's play.

“It was quite a process and… I had to go to different sources for each one to try and pull out the reality of what they actually did for women, because that’s the thing that’s overlooked for a lot of them.”

How has your work as a politician and a teacher informed your writing?

“For me, finding out about the person who allowed me to have the freedom to do my job today, but having realised that I’d never even heard her name was really moving. So, I felt very close to her and also I related to some of the struggles she had – obviously not anywhere [to] the same extent!

“I think being a teacher of young women helped me a lot with the writing of the play. So, I felt very much like I was doing it for the students I used to have. I really want them to come and see it because I want young women to hear these stories and be inspired in the same way that I was when I found Caroline Trachy.”

How are you feeling ahead of the performances?

“Until today I hadn’t really stopped to think about the fact that on a really personal level, it’s quite an achievement for me. I’ve never done this before and I’ve suddenly realised that I’ve written a play that’s going on in a theatre and that’s really exciting!

“I’m really proud of myself but I’m also really nervous all of a sudden… It’s a very vulnerable thing to do, it’s like someone looking into your soul a little bit!

“The actors have been phenomenal, my cast is incredible and they have worked so hard to capture the voices of each character and portray them as really human people and not caricatures. I’m really excited for them and I just hope people come to see it for their sake!”