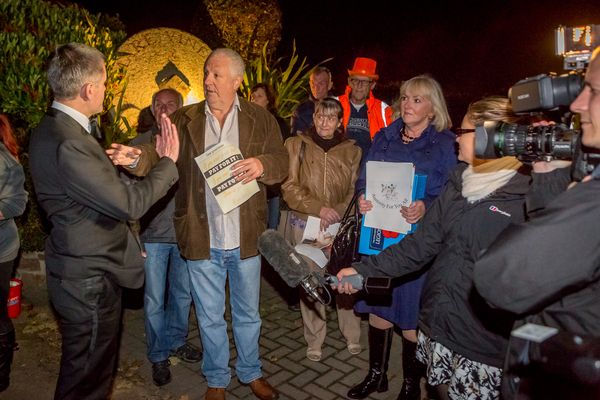 States Members heading to a swanky black tie dinner to mark the end of the line for some of their colleagues had to run the gauntlet of protestors who had gathered to demonstrate against their night out.

While politicians said farewell to States Members who had decided to retire or who lost their seats in last week’s election in the luxurious surroundings of La Mare Vineyard, around ten protestors outside were demanding to know why the taxpayer had to pick up the tab when there’s already a multi-million pound hole in States finances.

An online petition started by St Ouen resident Sandra Bisson had gathered more than 1,600 signatures by the time the event took place – she described the meal as an “insult to ordinary working people who are struggling to feed their families”, but warned protestors not to heckle or throw anything, saying she wanted the protest to go off "in an orderly manner".

Several current and former States Members stayed away from the event after the media coverage, and only a couple of those who attended - including Senators Ian Gorst and Philip Ozouf and St Martin Constable Michel Le Troquer - stopped to talk to the protestors.

Once inside, they enjoyed a menu that included an "oak roast salmon" starter, followed by "slow cooked shoulder of lamb with Umbrian lentils" and dauphinoise potatoes.

During the last few days, some politicians committed to paying for their dinner, and others promised to make a donation to charity instead.

In a rare political intervention earlier this week, Bailiff Michael Birt released a statement saying that although there was no expectation that politicians should pay, they might consider making a charitable donation, and that the new Assembly should consider whether the States should fund a similar meal in three and a half years’ time.

He also thanked La Mare Wine Estate who had agreed to provide the premises without a fee.

One group of politicians weren't invited last night - the newly-elected Members gathered for their own dinner at Mash in St Aubin on Wednesday. The taxpayer didn’t pick up the tab, but Deputy-elect Murray Norton, who owns the restaurant, gave his new colleagues a discount.