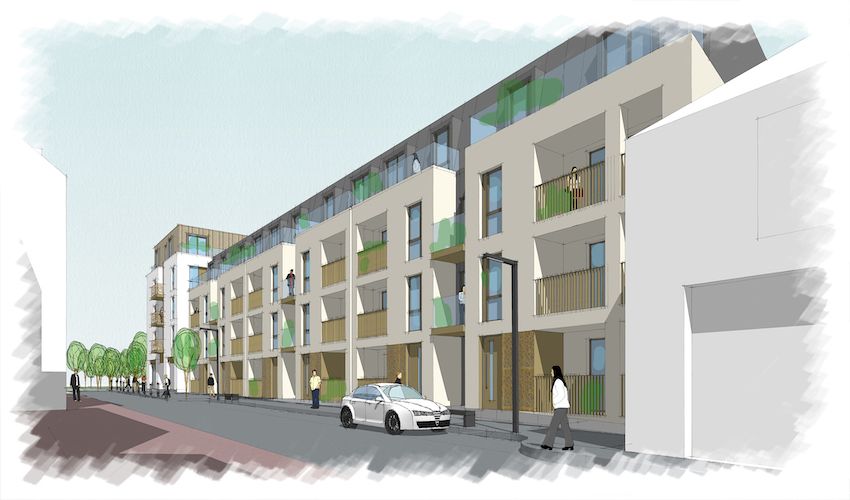 A pub chain is proposing to transform its 19th century former brewery site into a “multimillion-pound re-development” of nearly 100 flats complete with office and retail space.

Randalls made the announcement that it will be submitting a planning application to develop its old brewery by the Parade into a housing, office and retail complex, including underground parking, this morning.

Randalls have owned the site since the brewery opened in the early 1800s before it stopped brewing beer in 1992.

Pictured: Early sketches of what the development could look like if Planning approval is granted. (Randalls)

The plan, if approved, will see 96 apartments built on the Clare Street site and will incorporate the redevelopment of other units owned by Randalls on the nearby Cannon and Saville Streets.

Of the proposals, Randalls Managing Director Gavin Reid said: “I am delighted to announce that following a detailed period of review we have now reached a stage where we are in a position to submit a planning application for a multimillion pound re-development of our Clare Street site… The proposed plans will also allow for the restoration and re-use of two listed properties within the site, namely Clare House and the adjacent former stable block.”

The apartments will consist of 32 one-bedroom and 64 two-bedroom flats which will be accompanied by underground and courtyard parking.

Mr Reid added: “Should planning approval be granted, it will contribute significantly towards the increased demand for new homes for our island community. It will allow us to relocate to a new warehousing and distribution centre and subsequently remove the need for a substantial volume of large commercial vehicles to access what is a predominantly residential area of town.

“This is turn, will enable substantial environmental and public realm improvements in the area and will provide a major regeneration boost St. Helier town centre as a whole.”