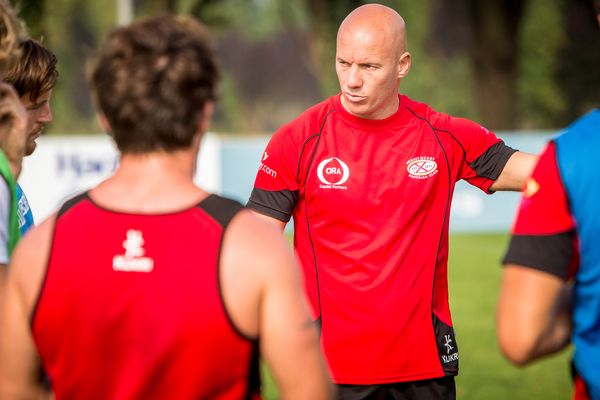 A last minute penalty saw second-placed Worcester steal the win away from Jersey 32-29 at Sixways this weekend.

But after a close second half the Reds picked up two points against the ex-Premiership side who are heavily tipped to make it to the play-off final in May.

The first half started fairly evenly on Friday night, and the most frustrating part for both sides was the referees indecision at the scrum that saw free kicks and penalties traded, with no apparent clarity as to why.

It was possibly not surprising that Worcester should score first, using a very effective catch and drive from a line out, and they were to use that process for their second try too after having first added a penalty.

Jersey rallied towards the end of the half and having won a penalty kicked to the corner for a line out. Worcester infringed in midfield and Jersey kicked back to the corner. Again Jersey pressed from the line out, and again Worcester were penalised. This time the Reds opted to the other corner; another penalty followed and it was from the 4th line out and drive that the visitors finally got their reward with Noone peeling off the front to touch down. Bentley's conversion attempt went wide and 17-5 was how it stayed.

Having trailed 17-5 at half time (2 tries to 1), the Reds were to go further behind soon after the restart as Worcester crossed for their 3rd, and it was starting to look all rather ominous.

Worcester were certainly showing moments of class, composure and physical presence, particularly through their forward play and a very effective driving maul.

Jersey started the second period with more vigour, but it was Worcester who scored first through a Gilbert try, before Noone added a second of his own. The Warriors suddenly seemed rattled and started to lose shape. Bentley slotted a penalty to take Jersey within 7 points at 22-15 and then with another penalty kicked to the corner. The subsequent catch and drive edged inwards and forwards, and then surged again, and as Worcester illegally pulled it down the referee had no hesitation to award the penalty try. Bentley converted and it was all square at 22 each.

The status quo lasted only a couple of minutes though as Worcester were awarded a penalty try of their own as they dominated a scrum 5m out and Jersey illegally stood up.

And then the most thrilling moment of the match for the travelling faithful: Drew Locke intercepted a pass just over the half way line and set off on a charge. With a chasing pack breathing down his neck, he had the awareness to change direction one way and then the other before diving early and sliding in to score to the left of the uprights; Bentley added the extras to level the scores again at 29-29.

Entering into the last minutes, Jersey must have thought they had done enough to take 3 points, but back came Worcester seeking the win. Lamb first missed one penalty chance from deep before slotting a second in the final minute, and that was that.

The fact that Jersey rallied so well and came so close to a draw, having twice levelled the score in the latter stages of the game, is a true testament to everything that Harvey and the squad have been working towards.

Other results over the weekend went Jersey's way, and the side are now sat clear in 6th position.

This coming Friday the Reds return to action at St Peter in the B&I cup in the return leg against Plymouth Albion, and will be seeking a win that will keep up the pressure to secure a quarter-final place.

The next Championship action is not until 20th December when Jersey host Yorkshire Carnegie.