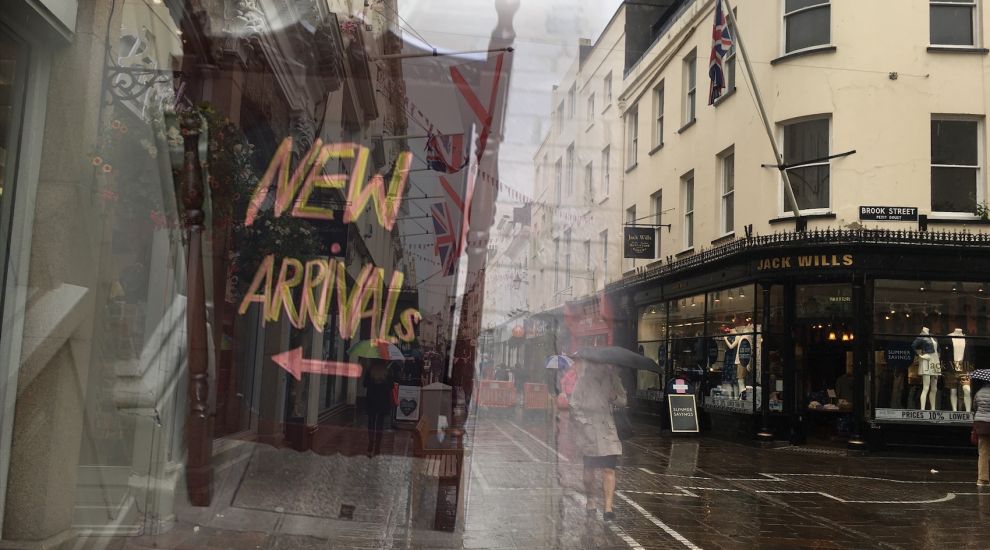 Empty stores multiplying at speed on the high street have sent a frisson of panic through Jersey's retail sector, but some are remaining cautiously optimistic about life post-pandemic.

After their first few weeks of reopening, under strict public health measures, Express found out how store managers were feeling about the situation now and the future of retail in Jersey…

This month started with the news that, following Topshop in December, Dorothy Perkins and Burtons stores would be closing their doors for good - the latter of which had been in Jersey for more than 80 years.

That same weekend also saw an uptick in high street activity, suggesting a keenness from islanders to get shopping again.

According to Chamber of Commerce statistics, the week beginning 8 February saw more footfall in King Street than there had been on the same Saturday of 2020, with 25,264 people recorded as visiting.

On King Street itself, Rivoli Jewellers Managing Director David Speed remarked on some first signs were “encouraging”, but urged caution on assessing success based on individual days, saying: “The footfall on Saturday [13 Feb] was due to Valentine’s Day… so it’s not a direct comparison.” 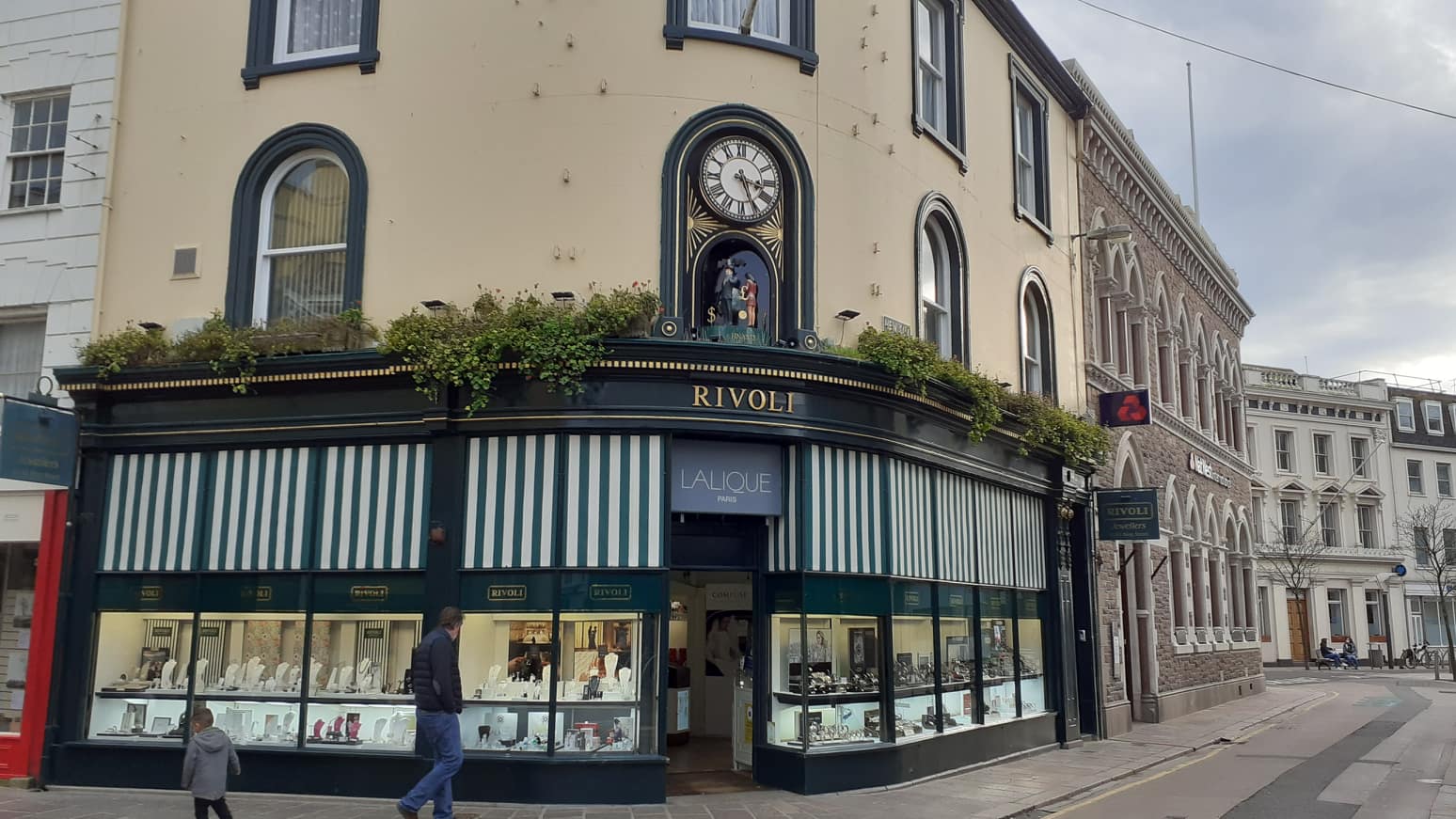 Pictured: Rivoli Jewellers Managing Director David Speed said the sector needs a few more weeks before it can make a full judgement on how sales a doing.

“The first two weeks of opening after lockdown were encouraging, that’s fair to say,” he explained.

“This last week has been less so, I think that what we really need to see is what the next four our five weeks bring, for us to gauge a pattern of what it’s going to be like."

Indeed, with hospitality only opening this week, half-term having happened last week, and people still working from home, there are still a number of temporary factors that have to be taken into account before drawing overall conclusions on how business is doing, retailers cautioned.

Mr Speed's predominant concern was the number of shops currently vacant in town, leaving less incentive for people to come in, following the collapse of the Arcadia Group, which ran shops such as Topshop, Dorothy Perkins, and Burton. 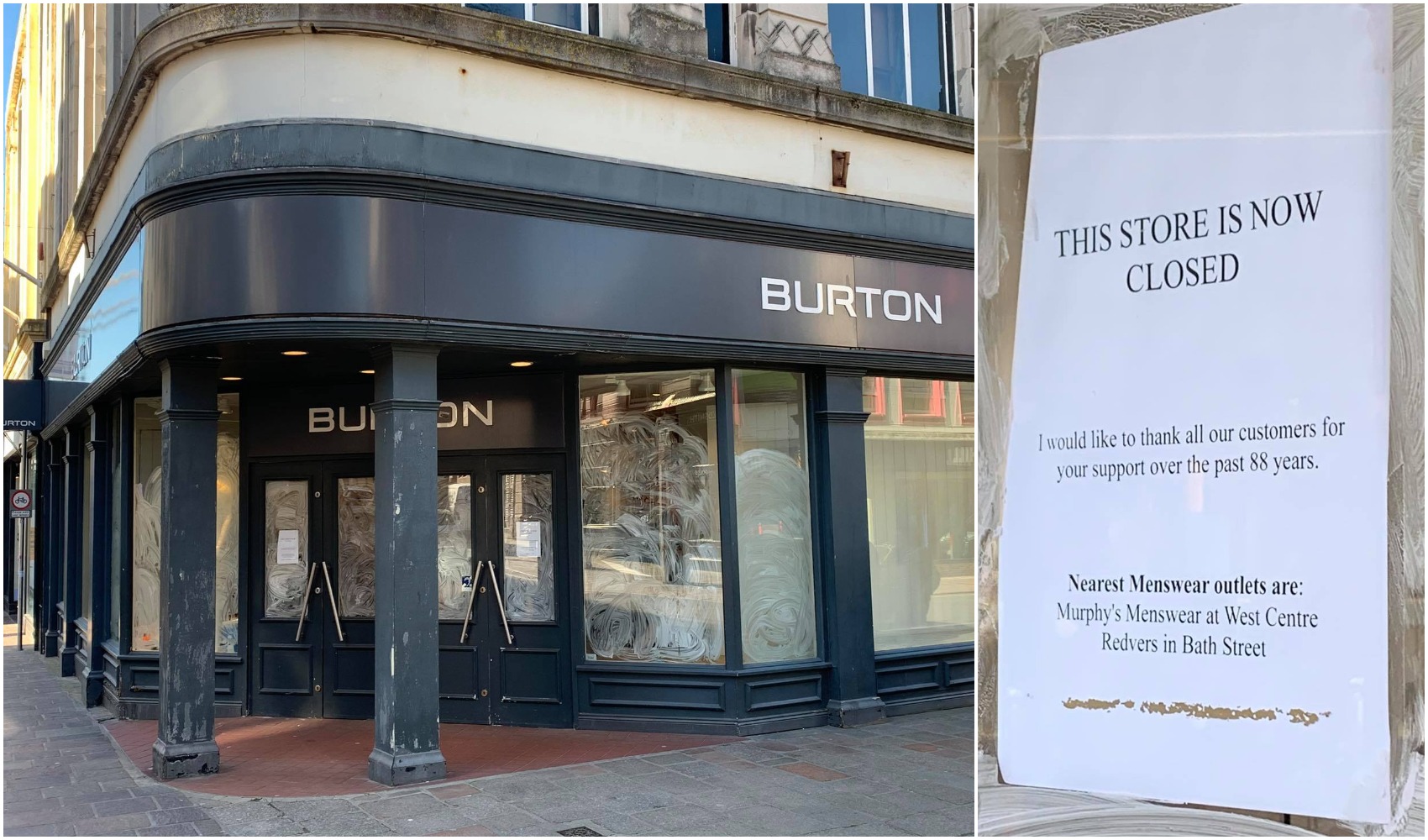 “What will not encourage people to come into town is the number of empty stores there are with the unfortunate cutting of the Arcadia Group and Beghin’s,” he warned.

“It doesn’t give a proper vibrant feel to town yet - once those units are hopefully taken up, then I think we’ll have a better idea of how the year’s going to pan out.”

He added: “I think that there is an appetite for people to come shopping, we just need to give people that reason to come shopping. As long as we’ve got the right product and right service, then there never will be any substitute for good personal service.”

Just off of King Street, market sellers such as Jane James’ Ceramics are looking optimistically to the future. 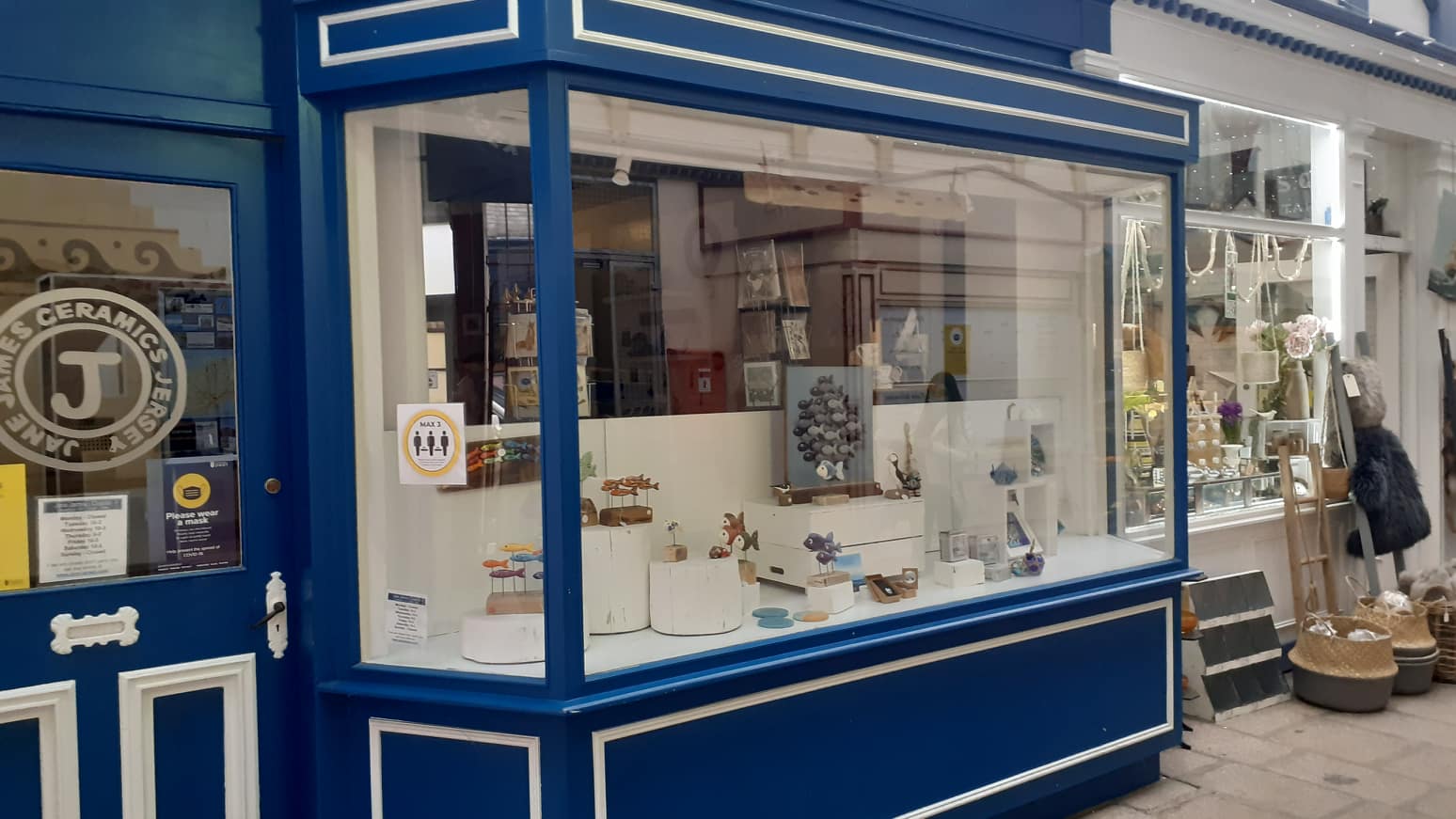 Pictured: Jane James remarked on how being open for events like Mother's Day and Valentine's Day has been a help to the business.

Although, as a gift seller, the early months of the year are usually a quieter time for Ms James, she said that the chance to be open for calendar fixtures like Valentine’s Day has been a real opportunity for the business.

“We did a special thing for Valentine’s Day and they went well, and we’re looking forward to Mother’s Day - that’s the next big thing for us.”

Looking to the future, she said: “For me, the biggest hope is that we can open up the borders safely soon and get visitors coming back to the island - that’s something that my business certainly relies on a lot.”

However, with borders remaining closed at the moment, Jane echoed her previous words to Express, urging islanders to come into town: “I keep on repeating it, but if you’ve missed the high street, come and use it, because we’re here waiting for you, and without you we don’t survive.” 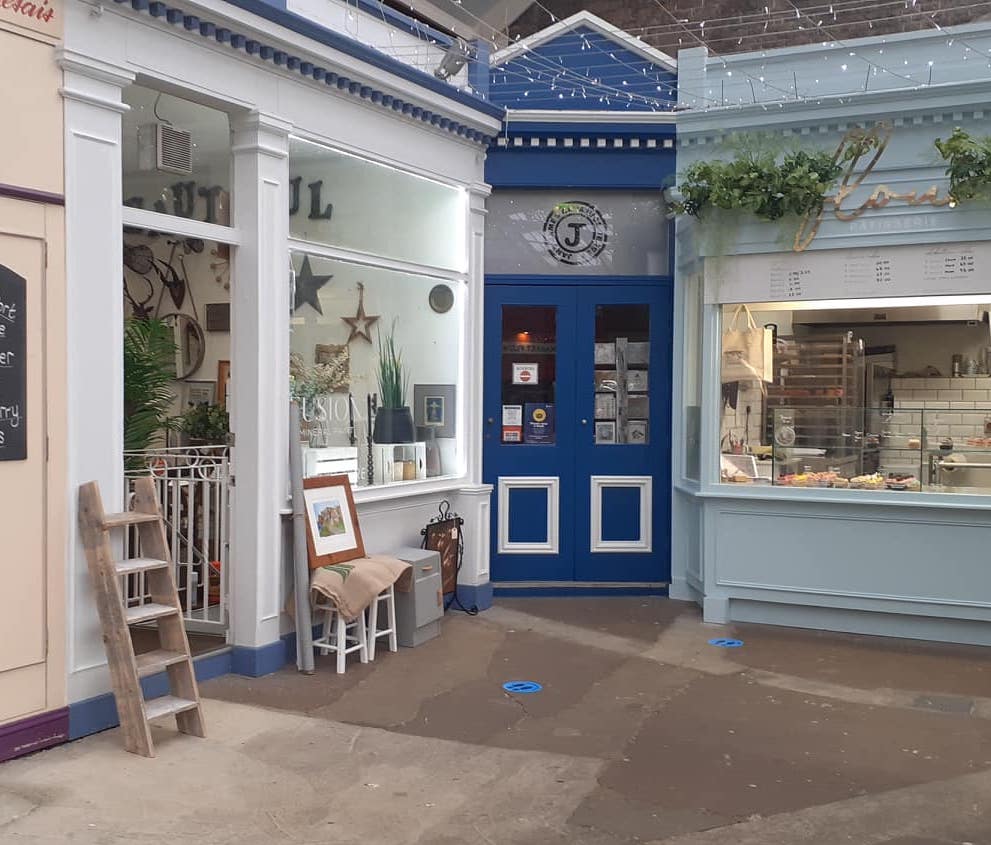 Pictured: Carrie Lakeman of Painted Beautiful remarked how she was looking forward to resume group activities like painting workshops once restrictions are eased further.

Similarly, Ms James' market neighbour, paint and furniture store Painted Beautiful, is feeling positive about the future, though the business's success is still dependent external factors such as stock to replenish for things to get fully back to normal.

“I’m opening three days a week at the moment until I can get restocked - my biggest problem has been sorting items from my suppliers, so I feel like I’m not fully stocked at the moment,” owner Carrie Lakeman explained.

However, the shop’s more specialist and vintage pieces of furniture have been still been selling well, with people staying at home meaning both money has been saved and people have wanted to do more with their own living spaces.

“During the first lockdown I was incredibly busy selling paint and bits to do up furniture, and that trend has continued, we’re still really, really busy.”

She added that she is positive this is set to continue, saying: “I think we are going to be busy going forward; January, February, March and April are typically quite quiet months for us, but it seems quite promising.” She is also looking forward to restrictions easing so that she can begin painting workshops again.

Across the road from the market, Elk Hargreaves, General Manager of Halkett Street clothes shop, Jacks, said that after a “slow start” reopening, business was now going at a "steady" rate. 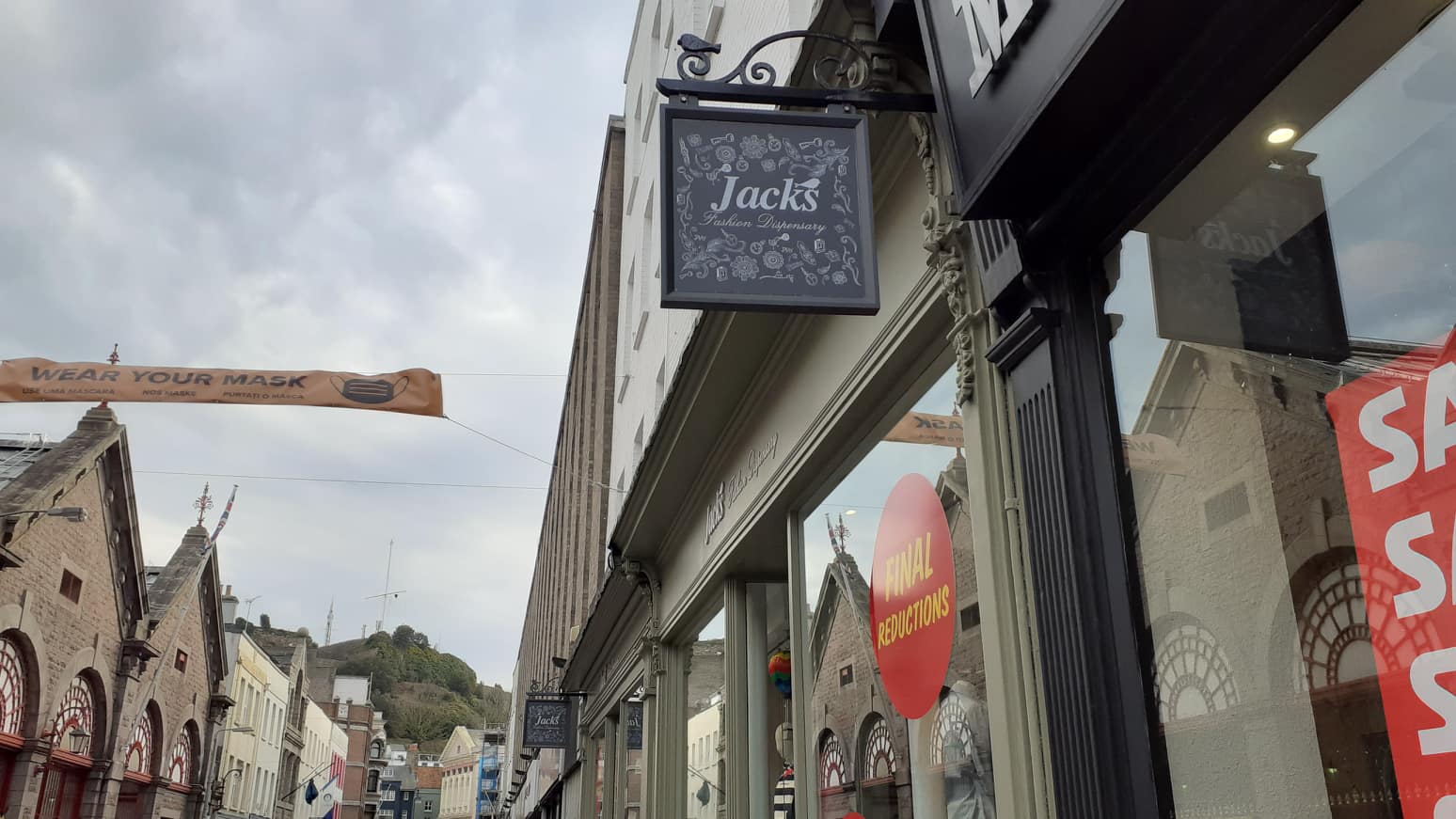 Pictured: Jacks General Manager Elk Hargreaves commented how weekends had become much busier for them, because of the majority of people working at home during the week.

“A lot of people are still working from home, so we’re finding our weekends are much busier than they were previously, as everyone who would normally come in on their lunch breaks are now coming in on the weekend, so it’s changed the dynamic of our week in terms of what we can expect mid-week compared to our weekends," she explained.

She remarked that, as a result of this, and factors like half-term, and the rain meaning people are less likely to queue outside of shops, the store has benefited from a moderate flow of business, but noted: "I don’t know if it’s been a huge increase.”

Like Painted Beautiful, the business has experienced some delays with stock. However, with warehouses outside the island reopening, this looks set to change. 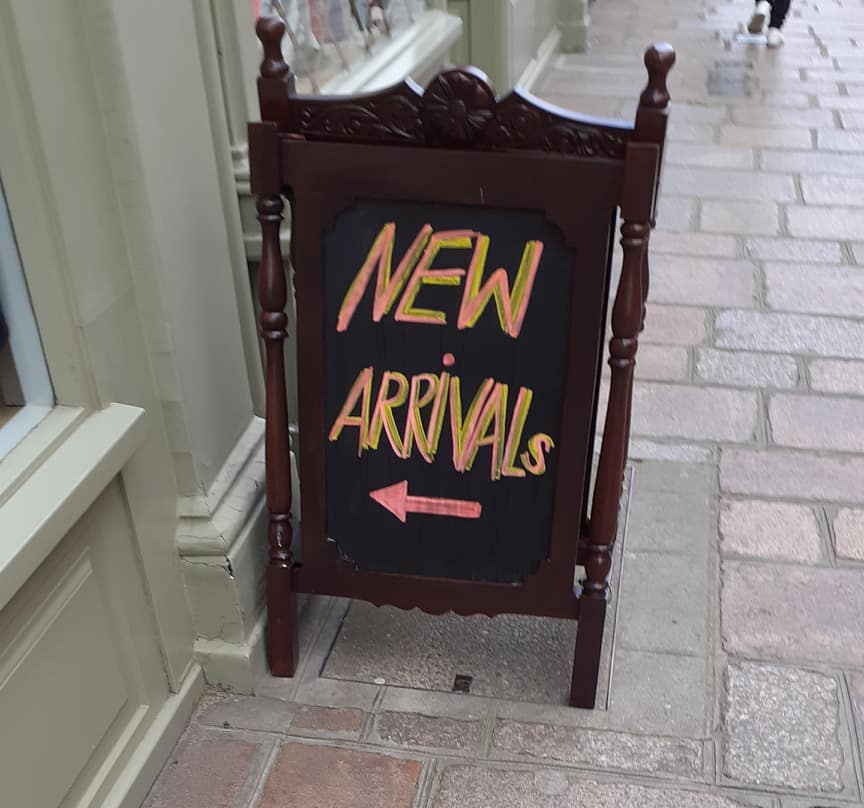 Pictured: Ms Hargreaves cited her excitement for new stock to start trickling in from the UK.

"Whereas in November and December, all the warehouses were shutting down and it was very difficult to get new stock in and to get people things they were wanting to order, now we can see that turning a corner.”

Addressing the issue of making the high street a draw for customers, she added that this increase in stock would help to make it more “attractive”, with stores beginning to do collection windows again.

With this supply coming back in, Ms Hargreaves said she was optimistic for town’s future this year, but that “after half term is over and everything starts to settle back in, and we get back into a normal flow, we’ll probably get a better read on how town is.” 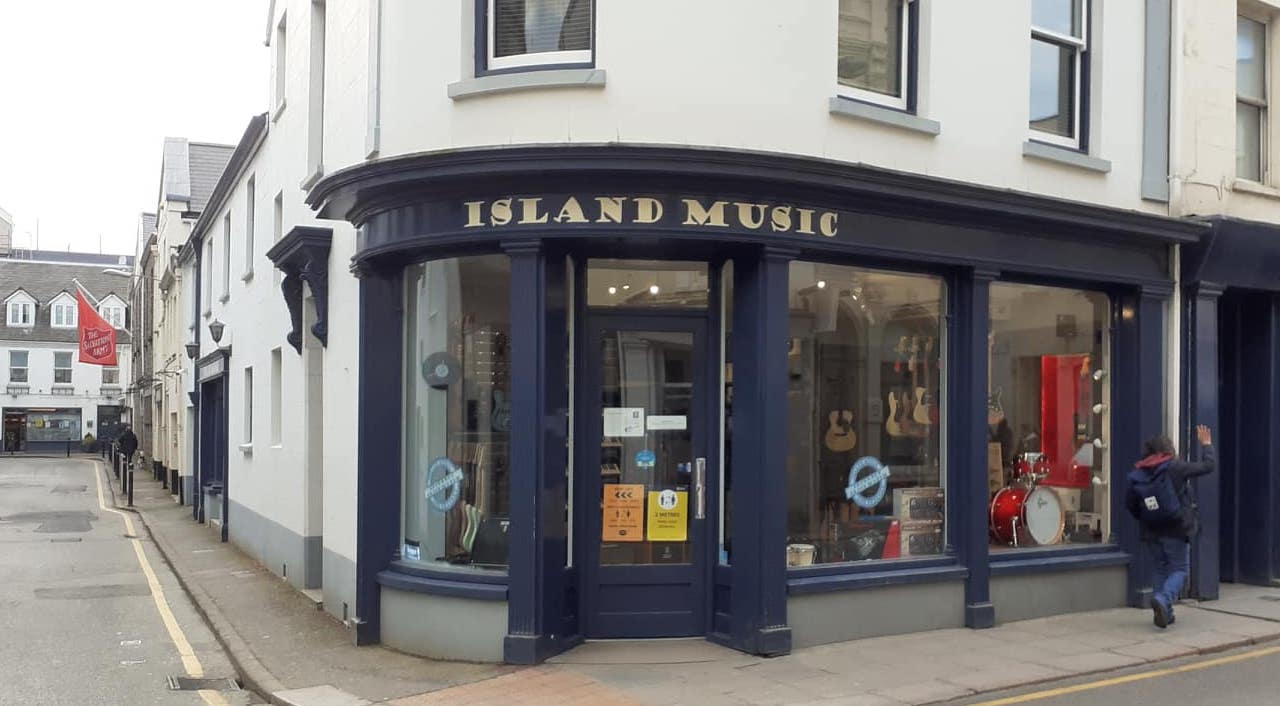 Pictured: Jonathan Scriven of Island Music said he was looking forward to the vaccination process concluding, hoping that older people will feel safer coming into town.

Venturing outside of town’s centre, concerns remain that those in the older generation, who remain some of town’s primary clientele, are still wary of actually coming in to shop.

“The older generation, who are more the shoppers than the modern generation who seem to be content to buy online, are more dubious about coming to town and the risks with covid,” Island Music owner, Jonathan Scriven observed, adding that “hopefully once the vaccine kicks in, everyone will feel a lot safer.”

He further stated he felt there was still some uncertainty over what exactly was open in town, with some shops in town not open when others are: “We still get phone calls from people asking if we are open - they’re not aware that other shops are open.”

Illustrating his point, he used Minden Place car park as an example of the difference in people coming to town, saying: "I’m looking out the window and there’s 76 spaces available - it used to be like less than 10 during the week, with people queuing to get in every now and again."

Despite this, Mr Scriven said he remained “optimistic that town is picking up and people are going to make the most of having local shops to shop in”, adding that their sales figures had still picked up “considerably” since reopening.

Continuing on this note, he expressed how he felt town offered a unique experience for shoppers, especially in regards to music, where expertise and knowledge is still a key factor in buying.

“We’re always trying to promote the fact that you gain and experience coming in shopping - you gain advice, something that you don’t get online.” 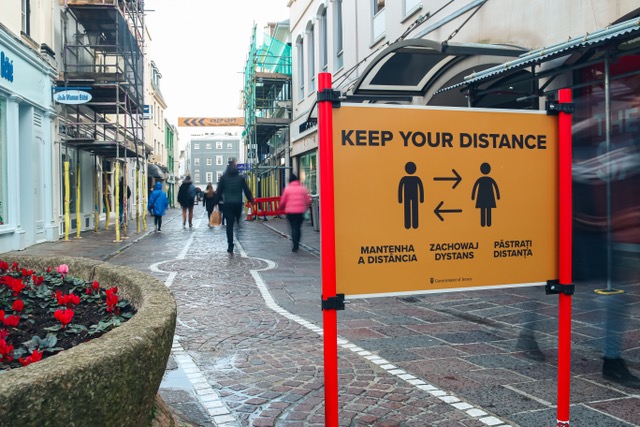 Pictured: Walkers through town's high street are currently required to keep to the left and maintain a social distance of 2m.

Looking at these different responses across businesses, the pattern remains the same: there is a sense of optimism, but with the feeling there is still some way to go.

Whether it be in making sure town itself is attractive to customers, keeping up awareness that shops are open, or waiting for stock supply from outside the island to return to normal, returning to business-as-usual is still seemingly a work in progress that will develop across the year.

“It is very early days to see this as a recovery, but we hope that consumers, who have clearly missed the opportunity to shop in Jersey, recognise that retailers, like so many local businesses have been badly affected and will want to support them and the local people they employ, whilst following the safety guidelines responsibly.”

Posted by Scott Mills on Feb 24th, 2021
Keep left and keep walking, the Jersey high street is sadly finished
Posted by Private Individual on Feb 24th, 2021
This is nothing more than the landlords overcharging rents whilst they expect us to pay for overpriced products.

Crowcroft has successfully implemented the "I hate cars" campaign to the point where you dare not even drive near town as it is now a no-go area.

Provide cheap parking with car parks and the people will return. Until then I will execute my democratic right to purchase products from the cheapest place I can find.
Posted by Jon Jon on Feb 24th, 2021
Future is online ,just have to see how this pandemic has changed how we shop, certainly by pass town now.
Posted by Donal Dolo on Feb 25th, 2021
end of town need entrepenaurs to revive it not freinds of freinds
To place a comment please login Login »