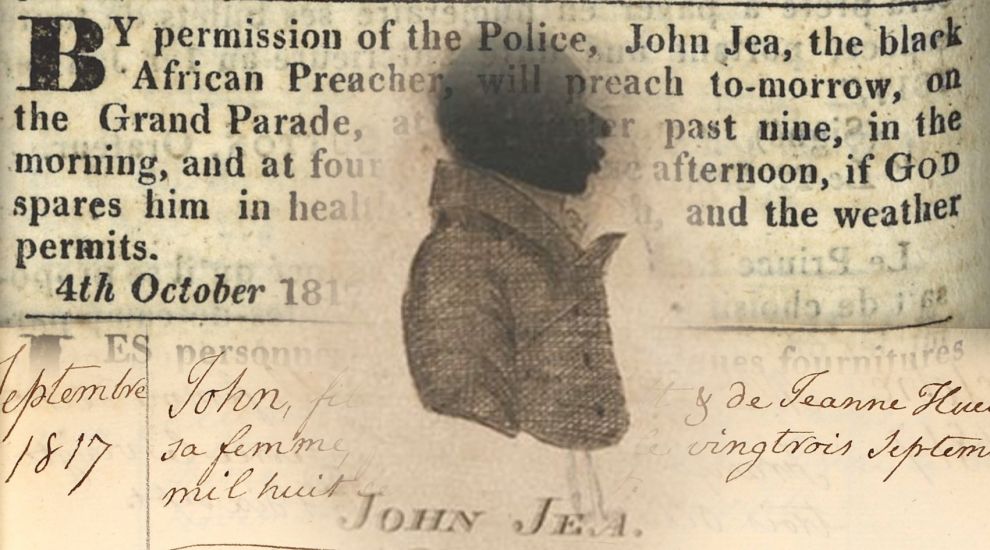 An African-American former enslaved person, who went on to become a prominent abolitionist and preacher, died while visiting Jersey in the 1800s, research has uncovered.

Jon Jea’s story is one of a number of items of black history linked with the island uncovered by Jersey Heritage in conjunction with local and UK historians.

Just as Black History Month in October has come to a close, Express shares some of those stories…

John Jea was particularly well known for his 1811 autobiography, 'The Life, History and Unparalleled Sufferings of John Jea, the African Preacher'.

In it, he explains how he and his family were kidnapped and sold into slavery in New York just two-and-a-half years after he was born near Calabar in Africa in 1773.

CLICK TO ENLARGE: A newspaper cutting about Mr Jea's visit to Jersey.

His master used to send him to church as a punishment, but Mr Jea felt an affinity with it, and became a devout Christian. So religious was Jea, that he later attributed his literacy to a miraculous visit from an angel.

After being freed in the 1780s, he travelled through the US, South America and European countries preaching and working on ships.

On 4 October 1817 a short notice appeared in a local newspaper stating: "By permission of the Police, John Jea, the black African preacher, will preach to-morrow on the Grand Parade, at a quarter past nine, in the morning, and four o’clock in the afternoon, if God spares him in health and strength, and the weather permits.”

While Mr Jea's ill health is alluded to in the notice, it wasn't until recently that it emerged Mr Jea sadly appeared to have taken a turn while in Jersey, and passed away 11 days after he was due to preach in St. Helier. 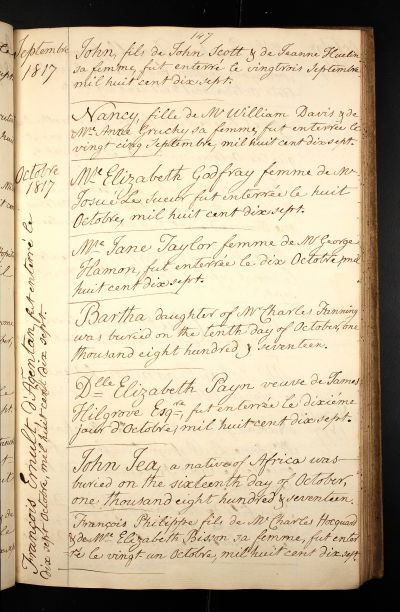 While researching the burials of Napoleonic soldiers, local historian Doug Ford found the following in the St. Helier Parish Burial records: "John Jea, a native of Africa was buried on the sixteenth day of October one thousand eight hundred and seventeen."

They also highlighted the story of Pompey.

Pompey was a soldier and servant of Major Francis Pierson. When Major Pierson was killed by a French sniper during the Battle of Jersey in 1781, Pompey avenged the Major’s death and shot the sniper dead.

A black soldier, known as Pompey, avenges the death of Major Francis Peirson in J S Copley’s famous painting of the Battle of Jersey of 1781. He wears the dark uniform of the Royal Ethiopian Regiment. #BHM2021 #BlackHistoryMonth #OurIslandStory @ArtHouseJersey @Tate @GovJersey pic.twitter.com/pPGuCgAjkJ

He can be seen in JS Copley’s famous painting of the Battle of Jersey wearing the uniform of the Royal Ethiopian Regiment.

It has been suggested, however, that ‘Pompey’ – perhaps so named due to coming from or having arrived in Britain from Portsmouth – could be an amalgam of a number of black servants.

In 1894, she travelled to Jersey where she gained her teacher training qualifications.

The following year, she returned to Sierra Leone and became a senior teacher at the Wesleyan Girls High School two years later.

#BHM2021 - Regina Wilson was born in Sierra Leone and trained as a teacher in Jersey in 1894. Her story has been uncovered by historian Adenike Okungoya as part of her research into Jersey's black history. #BlackHistoryMonth #BlackLivesMatter #OurIslandStory pic.twitter.com/WwwmsJr2lH

In 1966, her daughter, Constance Cummings-John, took on the mayoral title.

While on the island, It’s likely that Ms Wilson would have attended the Wesley Grove Chapel – a time when the preachers included William Smith, a mixed-race anti-slavery campaigner who went on to found Jersey College for Girls.

Her story, part of Mr Jea's and that of Mr Smith, which featured in a previous ‘Looking Back’, was uncovered by Adenike Okungoya.

Born in Ghana in 1816, Mr Smith was the illegitimate son of a Yorkshireman working for the Royal African Company, which was trading on the Gold Coast, and the daughter of a local chieftain.

When his father was transferred to Sierra Leone, William joined him there and rose up through the ranks of the civil service. 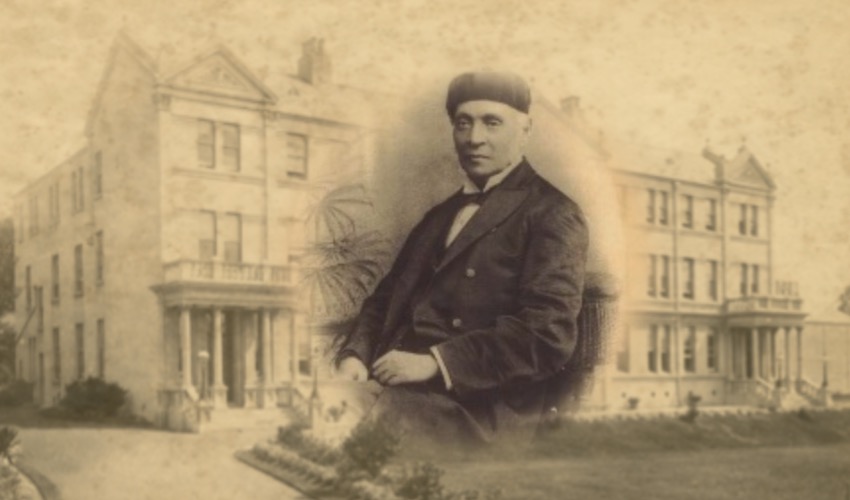 Pictured: William Smith, who was one of the founding members of JCG.

In 1871, William emigrated to Britain with his family. They lived in London for about two years before moving to Jersey for the benefit of his wife’s health.

He is described as a passionate advocate for female education and was one of the founding members of the Jersey Ladies College, where he eventually sent his own daughters.

One of his daughters, Adelaide, spent several years being taught at home by a governess, before attending Jersey Ladies College. 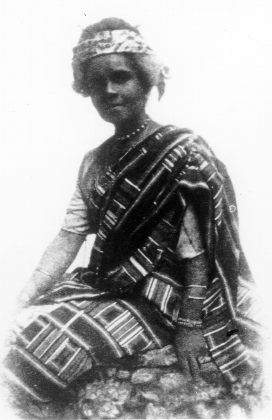 Pictured: Adelaide Smith, who went on to become an advocate for female education.

She excelled there, going on to study music in Germany and marrying a Ghanaian barrister in London. She then moved to Sierra Leone, following in her father’s footsteps by advocating for female education.

The 1834 register of individuals who claimed compensation when slavery was abolished includes more than 30 people from Jersey, claiming compensation for enslaved people often numbering in the hundreds, and some even going over a thousand.

One notable mention is the name Hortense Watson, a freed enslaved person owned by William Burke and living with the family in Jersey.

Little is known about her, but Jersey Heritage's Diversity and Inclusion Committee wants to uncover more stories like hers.

“We want to tell the stories of people that like Hortense Watson were enslaved and were subsequently freed, because that adds to the notion of the story and it brings about a wider conversation about [the fact that] this is not something that happened in a far flung place away from Jersey that had no ramifications for island," said Diversity Group member Jade Ecobichon-Gray.

“We had enslaved people on this island, and that brings the transatlantic slave trade right onto our doorstep and that requires a very uncomfortable but very necessary conversation.”

Some of these stories may be included in Heritage's upcoming exhibition focusing on Jersey's links to the transatlantic slave trade due to open on 23 August 2022, the International Day for the Remembrance of the Slave Trade.

Express recently sat down with Jade Ecobichon-Gray to talk about Jersey's black history and links with slavery in further depth...

Inside No 9...Jersey and the slave trade 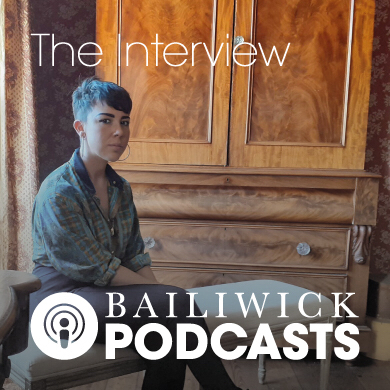