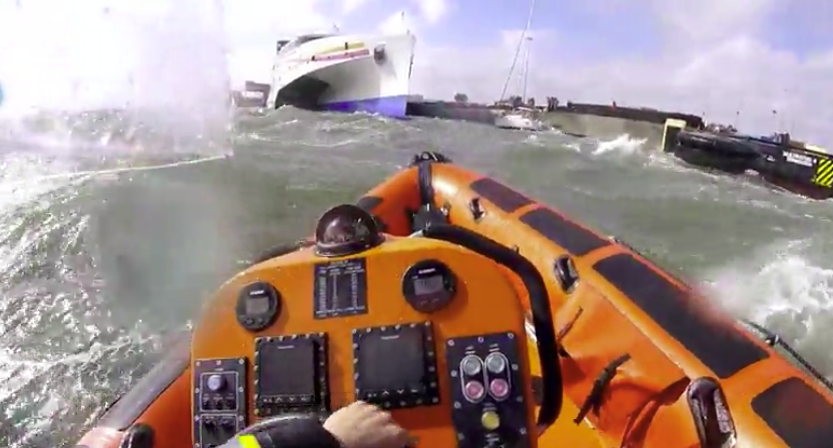 Storm Francis has been causing lots of problems for mariners this week, with one unusual incident involving the Condor Liberation.

In the high winds and turbulent seas, a 36ft yacht broke free of its moorings in Poole, and drifted close to the Channel Islands' ferry as it was docked, becoming trapped between the larger Condor vessel and a barge.

The RNLI launched their D-Class boat to deal with it, before it caused serious damage. They described the conditions as "rough", with the winds gusting force 6 to 8, and the waves bouncing off the wall.

The RNLI described what happened next: "When the lifeboat arrived on scene they went to the sheltered side of the Ro-Ro terminal and put a member of crew ashore to access the vessel, a line was put across using a heaving line, the lifeboat then towed the yacht off the wall and brought it to a mooring in the close by Port of Poole Marina.

"It was evident that the vessel had broken away from its mooring as there was a broken shackle on the bow and as it was all locked up, it appeared that nobody had been on-board."

That was just one of three call-outs for the RNLI in Poole on Tuesday afternoon. They also went to help a dinghy which was reported to be capsized on its moorings, and a 23ft yacht that had escaped its tether and was now drifting to the west of the Condor Liberation.

The lifeboat managed to get alongside and attach a line to it, towing it back to port. They moored it next to the other casualty of Storm Francis as it had sustained serious damage.

Volunteer Helm Jonathan Clark said: “Conditions out there were lively; the condition of the vessels would have been a lot worse, if they had been left any longer, pounding against the wall and barge. We would advise all boat owners, when it’s safe to do so, to check their moorings, make sure that their mooring lines, ropes and chains are in good condition and of adequate size, for your vessel.”