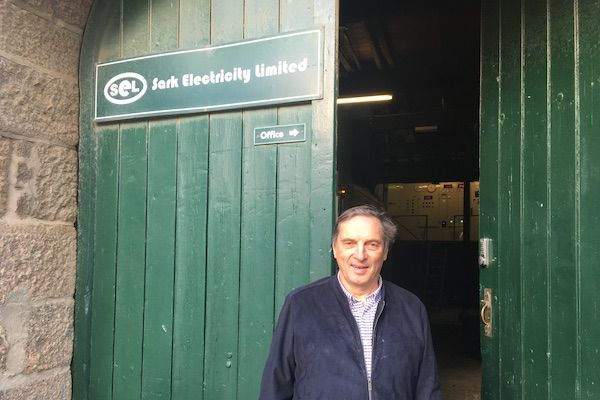 "It was... I don't really have words to describe it, it was very strange." Those were the first words Sark's senior politician had to describe a meeting that took place last night attempted to resolve the Sark Electricity 'crisis' once and for all.

The meeting was organised months ago by Sark Electricity Limited's Director to try and head off a similar situation to the one in 2018, where he threatened to turn off the island's generators to avoid bankruptcy.

But unfortunately David Gordon-Brown was not able to travel to the island because of illness, and so filmed an interview with himself, and played that at the people's meeting.

In that video, he said Sark had three options: buy SEL, ask Guernsey Electricity to buy SEL, or pursue a new 'green deal'.

Speaking this morning after attending the meeting, Sark's Chairman of Policy & Finance Sam La Trobe-Bateman, said the meeting had left Sark's residents frustrated, confused, and annoyed about "getting absolutely nowhere".

"In a prerecorded interview with his son-in-law, [David Gordon-Brown] sat down in arm chairs and spoke about what he had done in the island, what had happened with SEL, and then they gave us three options," he said.

"For the third option - the green deal - Chris Cook stood up and gave a presentation on what the green options were, but he didn't have any substance to talk about. he really hadn't done anything - no research, no costings and no explanations. There was no meat to the plan.

"[Mr Gordon-Brown] said he thought that GEL buying the business was a good option, and we don't disagree - they have a lot of experience, and have the right people employed, but I struggle to see it getting through the States of Guernsey. It would be good for Sark though. Sark's Government doesn't really want to own a power company, it just wants to ensure we all have access to a secure power supply. If Guernsey Electricity can offer a good proposition, then we could really benefit from their involvement."

In a press release issued before the meeting, Mr Gordon-Brown accused Chief Pleas of conspiring to put them out of business, and said legal fees were why he had had to put prices "through the roof".

"When the company was not put up for sale as expected, pressure was applied to try to make it impossible to stay in the small community of Sark, with public allegations such as “they take £1,000 profit from each customer”, carefully staged in Chief Pleas meetings where they could not be answered," he said, "as this did not work, so the next stage was to introduce a law that allowed the politicians to set the price of electricity, allowing them to set it so low that the company would be bankrupted, making its assets available for pennies in the pound out of the bankruptcy.

"The unfortunate result of all this manipulation has been the excessive legal costs forced on the company that now have to be paid by its customers. Last year, these were almost half of the company’s total costs, forcing the electricity price through the roof.”

Mr Gordon-Brown said one thing was for sure though - doing nothing was not an option: "The only option that is not available is the option to do nothing.  Last year, the commissioner settled his court case before we went to court.  Even so, between Chief Pleas and the company, this still cost the people of Sark almost ¾ million pounds.  Now he’s starting again, so this time we must go to court to resolve it, but at what cost?  And it is all to be paid by the people of Sark, most likely through their tax bill (Chief Pleas picks up all the commissioner’s costs) otherwise though the electricity bill.  This is a lose/lose situation for the Sarkese, and the company has no option either.  It cannot allow itself to be made bankrupt by this price.  Chief Pleas must act.”

Mr Gordon-Brown's daughter was representing him in person at the meeting. Mr La Trobe-Bateman said she was an excellent representative, but also was not fully briefed on the situation, and so some questions could not fully be answered on the night. Mr Gordon-Brown has promised to answer any questions on his website in the coming days, however. She did say that Sark Electricity would give Chief Pleas access to its accounts and other documents though, which means the government can finally conduct its own valuation of the business.

Valuation has been at the centre of arguments between the government and the utility this year, and is why the business was never bought by Chief Pleas. It was never allowed to see these documents - which SEL is now saying it will release - and so it couldn't put its own valuation together. If Chief Pleas get the documentation then, Mr La Trobe-Bateman said a valuation could be done, and if that is done then the planned government purchase would be back on the table.

"If it is the case that we, and the Electricity Price Control Commissioner, can have access to the documents then we can finally get an independent valuator appointed, and then we can go from there and try and reach a figure we agree on," he said.

"The general feeling from this meeting though was that Sark had three options, and if the island doesn't decide, then SEL will lose too much money and will have to switch off its generators. There was definitely an underlying threat that the generators will get switched off, especially if the Commissioner tries to enforce his price in January."