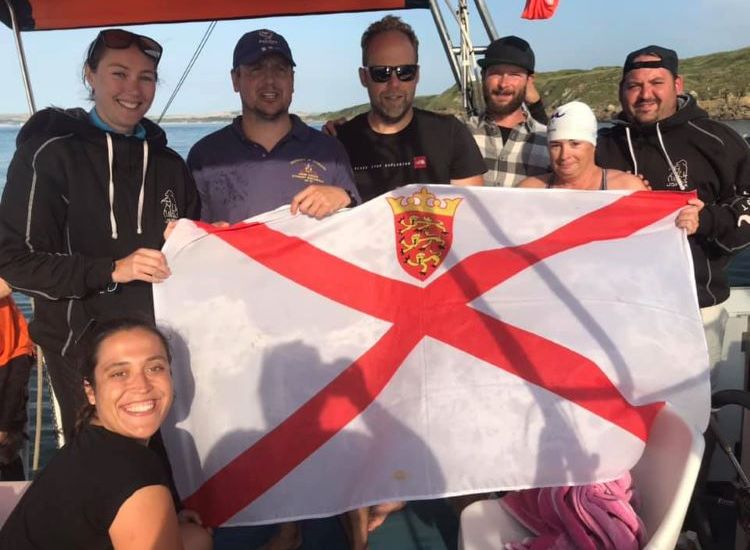 A team of six local swimmers aged 25 to 45 have completed a relay swim across the English Channel in just under 12 hours, raising more than £7,000 for the Animal Shelter.

They set off at 06:30 from Shakespeare Beach in Dover and swam towards the Cap Gris-Nez in France in 11 hours and 42 minutes, the third quickest time for a relay swim so far this year.

They trained for the challenge over the last nine months under the coaching of Andy Truscott of Swim Smart, who did the only solo swim from Jersey to France and back as well as swimming round Jersey twice without stopping.

According to the coach, the swimmers could not have dreamed of better conditions to swim in.

“It was textbook weather, you could not get it better,” he said. “It was force 1, force 2, it ran to force 3 at one point, which is fantastic for swimming, and it was sunny.

“It was perfect weather to swim which you do not get really often so you need to make use of it, luckily it fell on our days, it was perfect conditions.”

Speaking the day after the swim, as the swimmers were about to get in the water again to shake off sore muscles ahead of their return home, Andy shared how proud he was of all of them.

“They were great, they were fantastic, all six of them,” he said. “They had trained incredibly hard as a team.  There were no complaints from any of them. They all did fantastic, and all got on with it and just cracked it out.”

He said their finishing time had even smashed his expectations.

“Before you come over, you have to let the pilot know how long it will take,” he explained. “I told him between 12 and 14 hours, because I knew they had it in them. On the last swim, they gave everything they had.

“They have done extremely well for a group of people who came together and had never done anything long distance before. They are so excited so are we.”

Andy revealed that some of the swimmers had already suggested they might want to tackle an individual swim in the future. “They have got the bite now,” he said, adding that the team was “absolutely buzzing” after completing their challenge.

In addition to challenging themselves, the team aimed to raise funds for the JSPCA. They originally planned to raise £4,500 but when the target was reached they raised it to £5,000. They are now at just over £7,500 and are hoping to get to £8,000.

Speaking earlier this week, Nicky Holgate-Smith, a self-confessed dog lover, said she was a huge supporter of the charity.

“I have been very privileged to have met all the team at the Animal Shelter and what a fantastic, dedicated and compassionate team they are,” she said.

“I am absolutely delighted to do my bit to raise vital funds to help them.”

CLICK HERE to donate to the team's fundraising page.

Swimming 'fur' a good cause