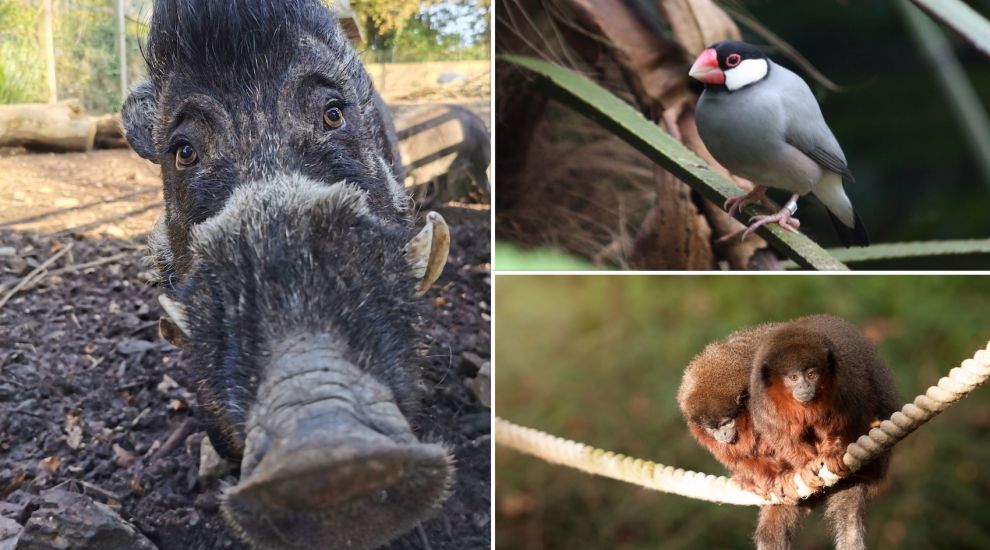 The list sounds like the lyrics of a Christmas carol but it is actually the names of the animals Jersey Zoo welcomed this year.

Described as an “exciting new primate species for Durrell”, the coppery titi monkeys, named Teddy and Redington, have been settling in well at their new cabin in Tamarin Woods. 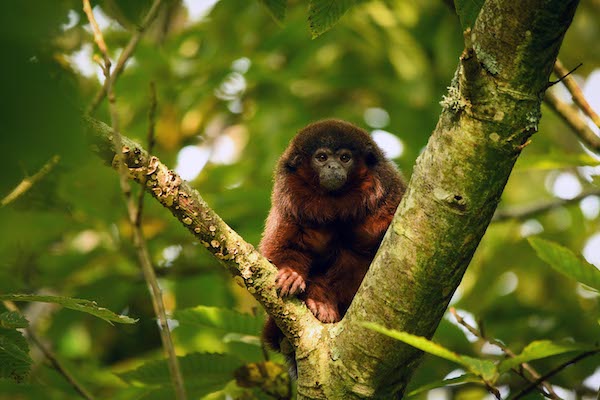 Pictured: The titi monkeys came to Jersey Zoo from Belfast Zoo, which has a successful breeding programme. (Credit: Emma Caton)

“They were quite shy when they first arrived, but their confidence has grown more and more,” Senior Mammal Keeper Mark Beresford said.

"As brothers, their bond is strong, and they definitely stick together. They share a nest box and are often seen cuddled up next to each other with their tails intertwined.”

The pair came to Jersey in July from Belfast Zoo, which has a successful titi monkey breeding programme, thanks to the help of JCS Logistics.

Mr Beresford added: “Belfast Zoo has enjoyed success with breeding these South American monkeys and as the infants get older, they move on to other zoos

“Teddy and Redington reached the age of leaving their family group so have moved here to Jersey. This way, Belfast can continue their breeding programme and the brothers get an amazing new home here in the woods.” 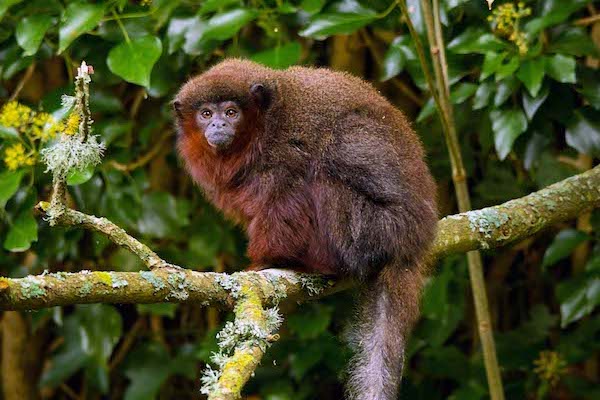 Pictured: The coppery pair will soon be getting more time outdoors. (Emma Caton)

In Spring, as the weather starts to warm up again, the pair will be slowly acclimated to roaming free through the trees in Tamarin Woods.

“The process for free roaming animals is very gradual,” Mr Beresford explained. “Titi monkeys have never been free-roamed before, but we are following the same training protocols we use for the tamarins and marmosets who also live in the woods.

“Upon arrival, the titi monkeys stayed in their cabin for a while, so they could get used to their surroundings and make the cabin their territory. While they were settling in, we did recall training twice a day using blueberries as a reward, which proved to be very popular!

“Over the last few months, we’ve been releasing them in short bursts and building up to a stage where we can let them out at the same time as their neighbours, the silvery marmosets, but it’s a little cold for this now so they’ll be keeping warm in their cabin for the winter! It’s a slow process but it’s been very exciting to do it.”

Video: Babs, Diosa and Penelope enjoying the sun before the arrival of Tre.

On the other side of the zoo at the warty pig enclosure, a new male named Tre arrived from the UK in early August, thanks to the support of Condor Ferries.

“At ten years old, Tre has moved to Jersey Zoo to enjoy his ‘retirement’ years and live happily with our three females, Babs, Diosa and Penelope,” Mammal Keeper George Pritchard explained. “They were all very excited by the smell of a new male and greeted Tre with amiable grunts and squeals. Those first meetings involved a lot of mutual sniffing and softly brushing their heads against each other.”

Mr Pritchard said that since his arrival, Tre has been proving to be “quite the gentleman”.

“He has a very relaxed nature and a gentle curiosity to him,” he said. “He loves to lie in the sunshine with the females and root around the enclosure looking for treats. We’re all looking forward to seeing his character continue to develop as he settles into his new home and his confidence grows.

Video: Dr Lesley Dickie, the CEO of Durrell Wildlife Conservation Trust, shares a review of the charity's work in 2021.

“Tre is quite easy to spot as males are larger in size as well as the presence of fleshy warts on their face, which is thought to protect the males when fighting. This is also where they get their name 'warty pig'.”

The Visayan warty pig used to be found across six Visayas islands in the Philippines but can now only be found on two – Panay and Negros – due to drastic deforestation. Having a healthy captive population is vital to saving the species, with hopes for zoos to reintroduce pigs to the Philippines in the future.

Earlier this year, ahead of Tre's arrival, Durrell put forward plans to build larger enclosures for the warty pigs as well as gorillas to bring the “outdated” facilities up to modern standards.

The plans, which have since received a green light from Planning, included the replacement of a 40-year-old indoor enclosure, the installation of up-to-date technology to control the environment, as well as the creation of a space for breeding. 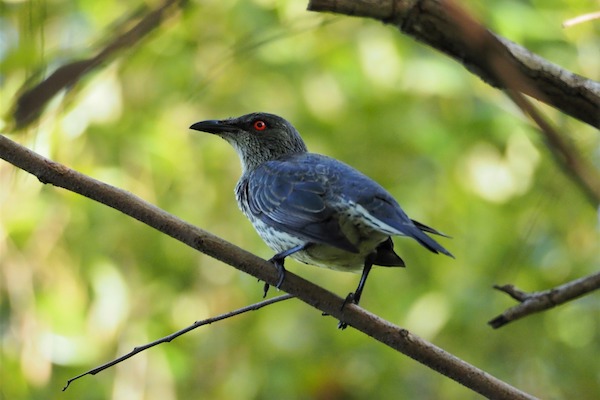 Pictured: Jersey Zoo now has nine Asian glossy starlings as the one picture above.

Last month, the bird department was excited to welcome ten more Java sparrows to the existing group at the zoo, as well as nine specimens of a new species, Asian glossy starlings.

The birds arrived from Chester Zoo and can be seen in the ‘Jewels of the Forest’ walkthrough aviary, which they share with other bird species from across Southeast Asia.

In the wild, Asian glossy starlings are widespread, moving in large flocks between islands and the continent, however, Java sparrows are highly threatened, often being trapped and sold as cage birds, which are a status symbol in Java.

“Songbirds are highly prized in Southeast Asia, particularly within Indonesia, due to their striking plumage and melodic calls,” Durrell’s Head of Birds, Dr Glyn Young, said.

“They are being collected from the wild in huge amounts, causing their numbers to drastically decline, and then kept as pets and used in songbird singing competitions, which generate considerable prize money. Bird trapping, along with habitat loss, is pushing wild populations to the brink.” 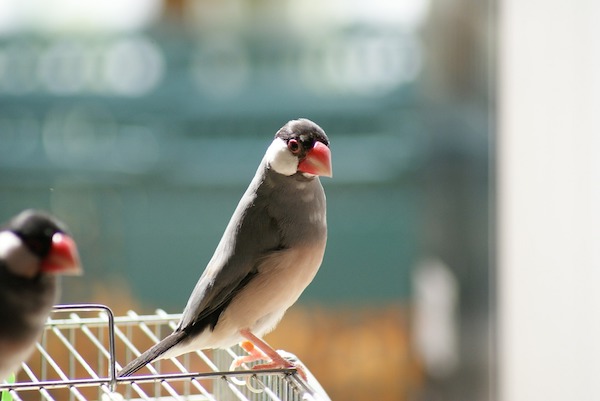 Pictured: A Javan sparrow like the ones Jersey Zoo recently welcomed.

The team at Jersey Zoo breeds many songbird species to help boost their numbers in captivity and shares its knowledge with teams working on the ground, as part of a coordinated effort between European zoos to protect the precious birds.

“Using the skills learnt from working with these birds at the zoo, we advise our colleagues in Sumatra and are currently helping them to establish a secure breeding centre there called ‘The Haven’ which will provide a safe place for birds,” Mr Young said. “It will also help to educate local people on the importance of protecting songbirds.”

Could you make the cut? Slaughterman seeks apprentice