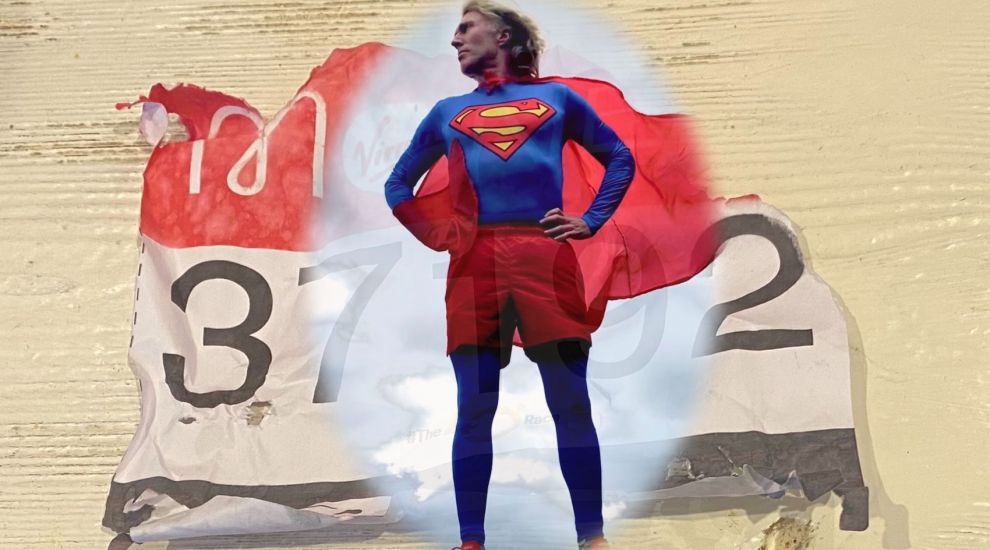 If you ventured to St. Ouen on Sunday, and thought you’d seen Superman braving the elements to save the day, you wouldn’t be entirely mistaken.

That’s because acclaimed UK violinist, Jonathan Hill, donned the Man of Steel’s costume to run the equivalent of the London Marathon across St. Ouen’s Bay to raise money for a London theatre charity.

Jonathan has led, and guest-led, 15 West End shows, and has also performed on soundtracks for film and TV such as The Lord of the Rings and The Simpsons.

In addition to his musical performance, he had initially lined himself up to do the Abbott World Marathon Majors this year, which comprises of Tokyo, Boston, London, Berlin, Chicago and New York City.

However, as the pandemic hit, he found every single one being cancelled. When the London Marathon was hit though, Jonathan came up with an alternative – running the virtual 26.2-mile London marathon by going back and forth along St. Ouen’s Bay. 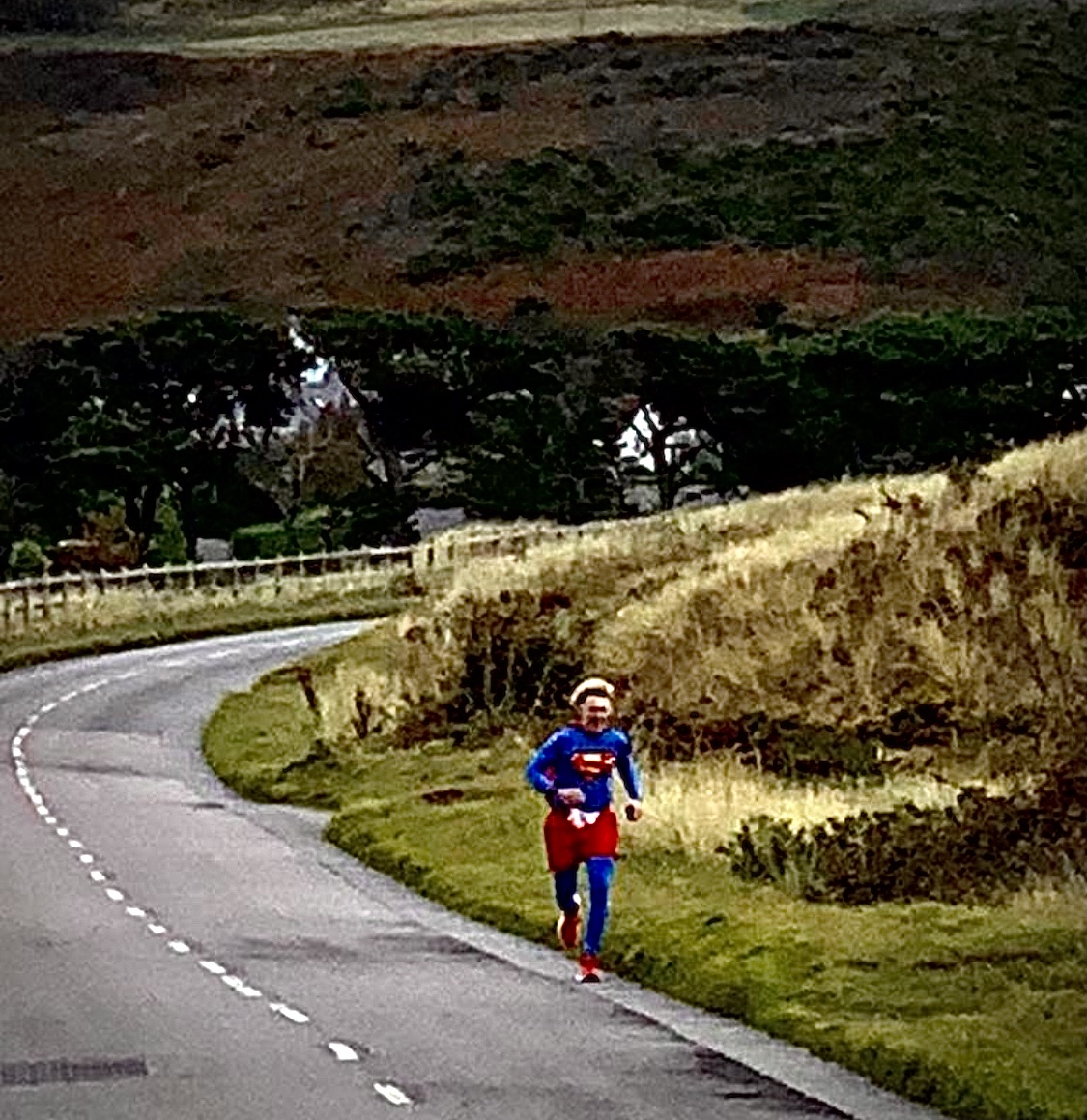 Speaking to Express, Jonathan described how he had “fallen in love” with the island 28 years ago, when he had first been invited over to lead the Jersey Symphony Orchestra through the Royal College of Music. Though initially he only came over three times a year, that soon changed when he left the orchestra in 2001.

“The couple I was staying with said, ‘Don’t be a stranger,’” he laughed, “so instead of coming three times a year, I started coming eight times a year!”

Discussing his St. Ouen experience in contrast to a regular marathon, he described going from having “60,000 people running around you and a big support network” to running and nabbing snacks and refreshments from his car in La Braye car park as “absolutely bizarre.” 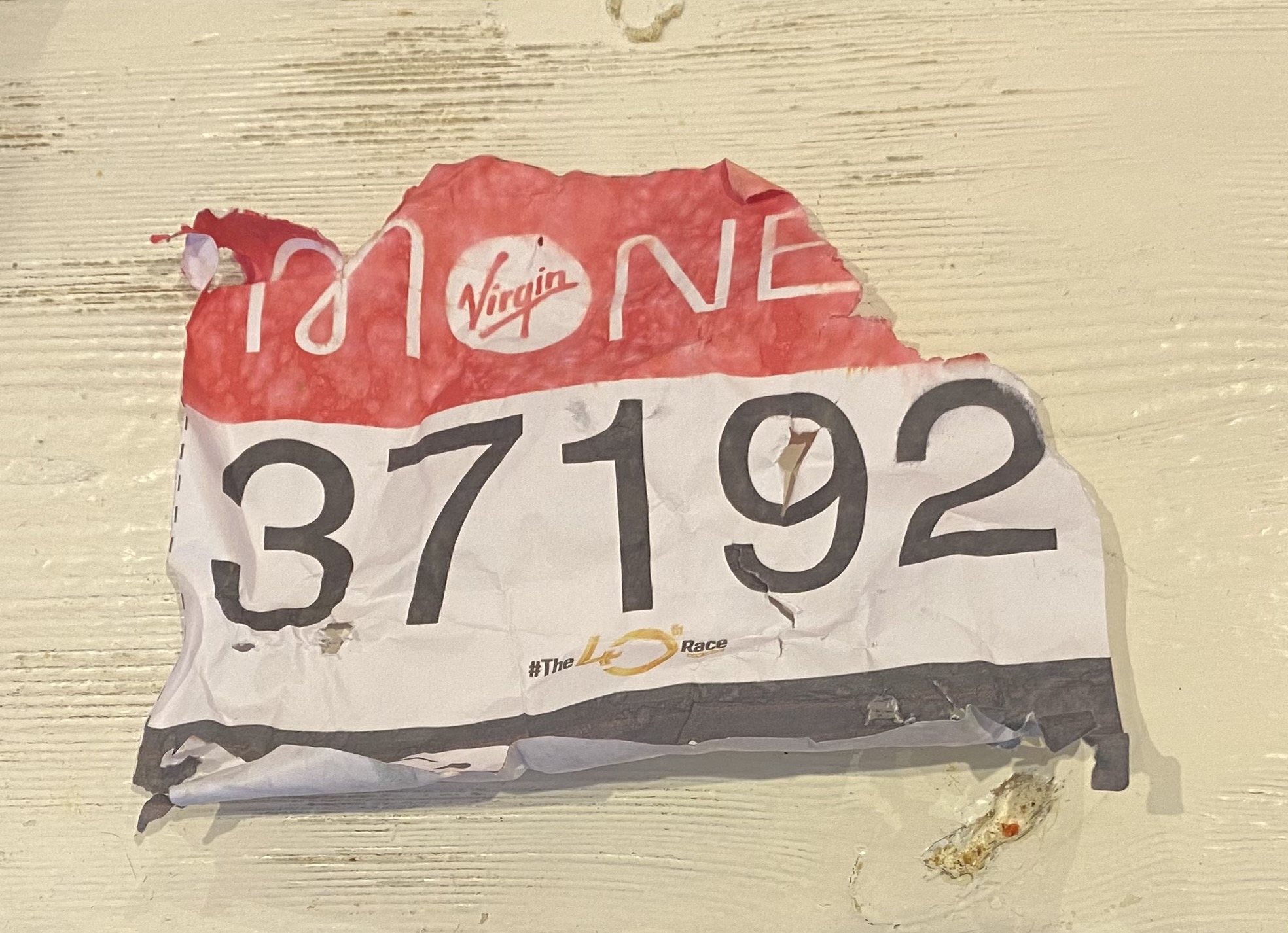 Pictured: Jonathan said that most of the things pinned to his cape, including his running number, were blown away by "about two minutes in."

But, thanks to his Superman costume, he ended up having a huge amount of support regardless from islanders, who could tell “that it wasn’t just a morning run", explaining that he “had a really, really lovely response from drivers and people out on their Sunday morning.”

Jonathan faced a supervillain-sized challenge in Storm Alex, however, with heavy showers and harsh winds, which “sap your strength like something chronic.”

And, unlike Superman, Jonathan was not aided by his flowing cape – “I was nearly blown into the sea a couple of times because it was like a parachute!”

Despite these setbacks, it was still a wholly unique experience for Jonathan, who described seeing the waves as "beautiful" and "memorable", and praised Jersey as a “great place for running.” 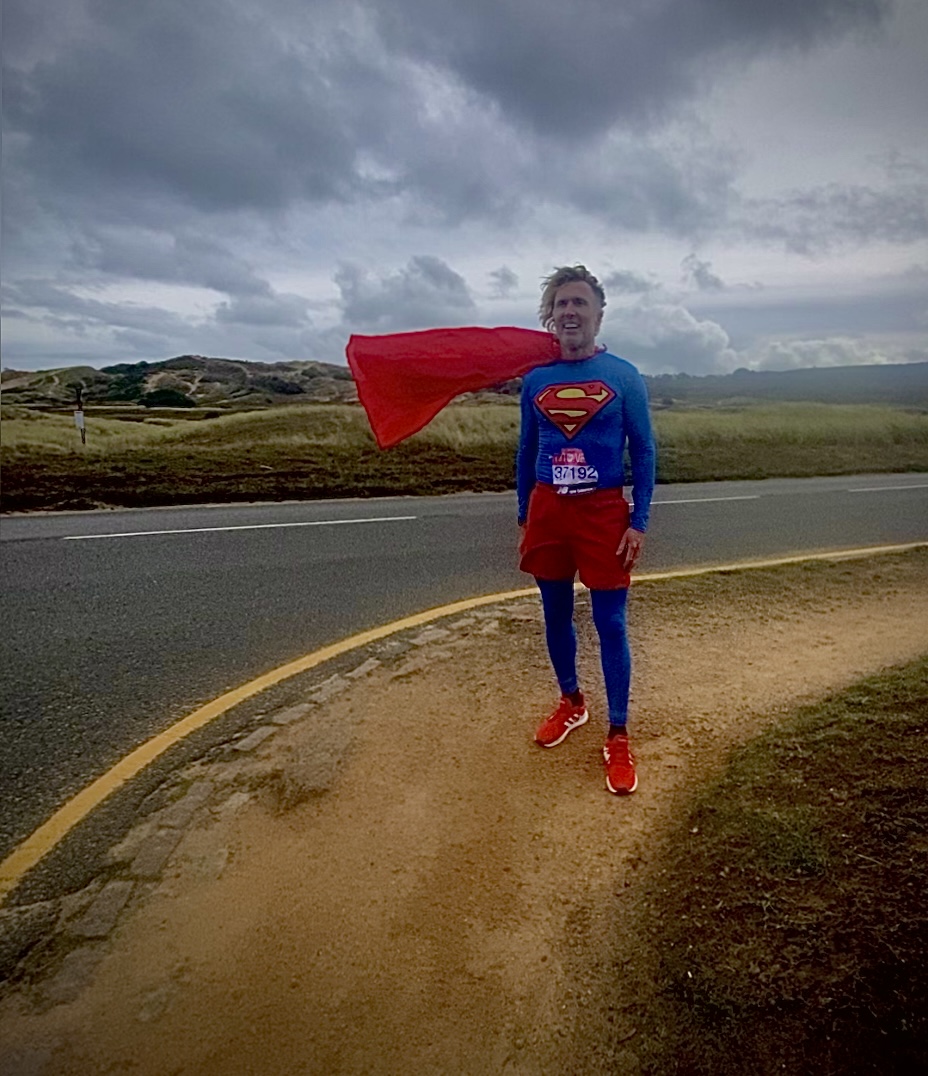 Pictured: Jonathan compared his cape to a parachute, saying the wind was so powerful it ended up going horizontal.

However, he acknowledged that “it wasn’t a day for personal bests - it was a day to be in a global collective of runners helping out charities that have been absolutely stuffed.”

Speaking in more detail about the charity he was fundraising for, Chickenshed Theatre, he said it was an “obvious choice” for him to pick, as both somewhere near to his home in London and a cause near to his heart, with the creative arts taking a massive hit from the pandemic.

“It’s an inclusive theatre, they put on these fantastic productions with people from all manner of walks of life; abled, disabled, autistic, learning issues” teaching them theatrical skills from choreography to sound to performance.

“What people don’t realise that as a charity they need to raise a huge amount of money for the facilities to give these kids and young adults the opportunity to be theatrical.” 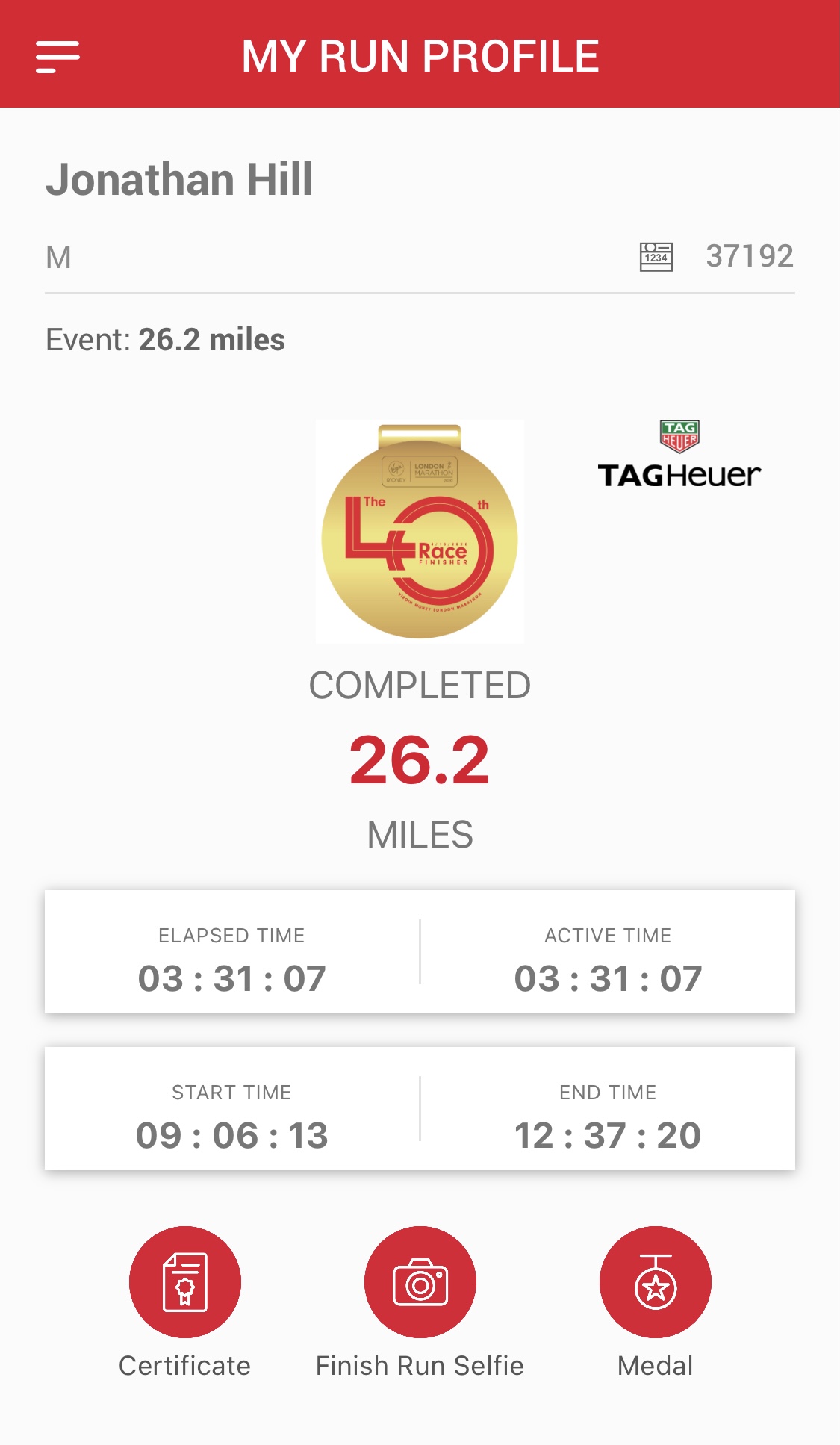 Pictured: Jonathan has raised over £1,000 for Chickenshed, a theatre company and charity that creates "inclusive theatre" for people from all walks of life.

From his efforts, Jonathan has raised over £1,000 for the charity so far, which will go towards its efforts to put on shows that include the whole spectrum of society, and increase theatre’s outreach.

Looking back at Sunday’s experience, he thanked the “absolutely brilliant” islanders “for making what could have been a really un-atmospheric marathon into something really memorable."

He added: “After a couple of hours of running, there’s nothing better than people giving you the thumbs up and shouting out of the car: ‘Keep going, Superman!’”

ART FIX: Coffee with a side of creativity