It’s been a difficult year for those in the events industry.

Bookings stopped in March as the island went into lockdown and those events that had been planned were postponed or cancelled.

But that hasn’t put off the team at Delta Events, who helped the island celebrate Liberation 75 and are seeing how they can adapt the business as the uncertainty around public and private events continues.

Despite the difficulties this year, Managing Director Simon Gasston remains passionate about what he does, and why it’s so important to island life, as he explained to Express..

If you were to walk into Delta Event’s main store at Springside in Trinity at any other point over the last 26 years, it would probably have been empty. The rows of shelving that reach the roof might have the odd piece of equipment that wasn't required, but other than that, mid-week at almost any time of the year would see this store and any of the three others used by Delta across Jersey and Guernsey nearly empty. 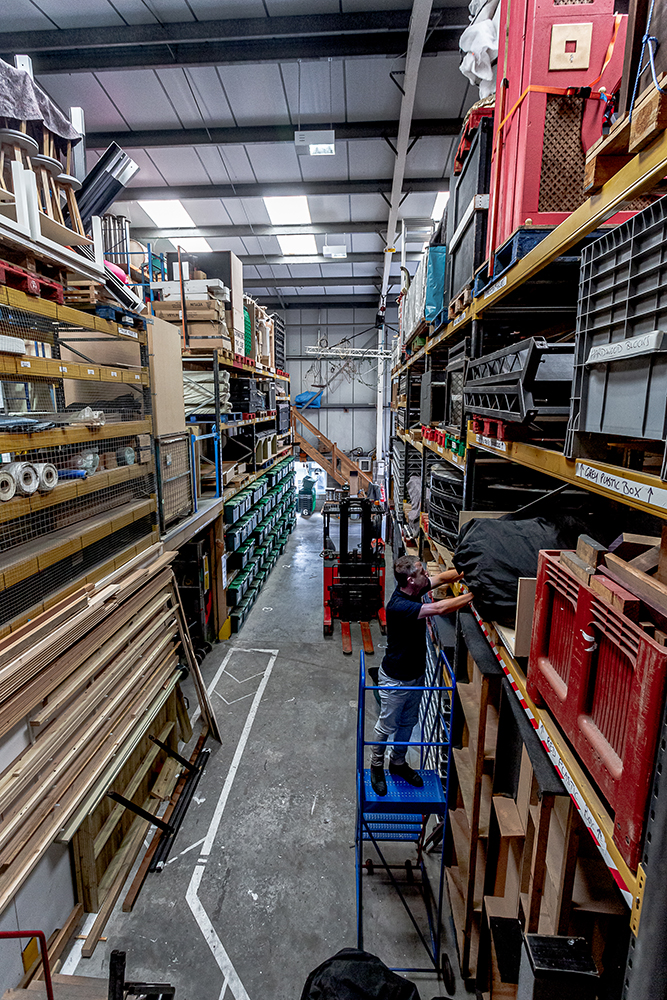 2020 was going to be a big year for events, especially for weddings. 2019 took a slight dip as people waited for the magic number. The irony that many people who were hoping for that date to get married, will end up with 2021 is not lost on Simon.

“This year was shaping up to be a really, really good year. Up on last year, which was up on the year before,” he explained. “In all elements of the business, weddings, conferences, live events, summer parties, Christmas parties, it was looking to be increasing - but obviously we got slapped in the face.”

At first, bookings were postponed with clients asking for space in June or September. But as soon as it became clear how serious it was, the cancellations began: a sobering moment for a business that typically runs on a three-month cycle.

“We had to make some difficult decisions,” Simon explained. “The end of March and start of April was a really worrying time for us because we couldn’t operate. A lot of other businesses have been able to be flexible and push out into other areas. We are 100% reliant on island events so it’s very difficult for us to branch out into anything.”

Delta Events was set up by Cristin Bouchet, Lloyd Sawyer and David Wilson who had started by providing the sound and the lights for the Inn on the Park raves in the 1990s. From there they tapped into the conference market, which was huge in the nineties.

“You used to get the big pharmaceutical companies coming to Jersey. In the Hotel de France you could have 250 bedrooms, 4 or 5 meetings going on at the same time, so it was a big destination to come to, but that tailed off in the last 15 years so we have branched out our offering into different elements of events, not just conferences and live events.”

The events industry is all that Simon knows. He started out aged 16, helping a friend for a couple of weeks who was working here for a Guernsey-based company called Joys Events. 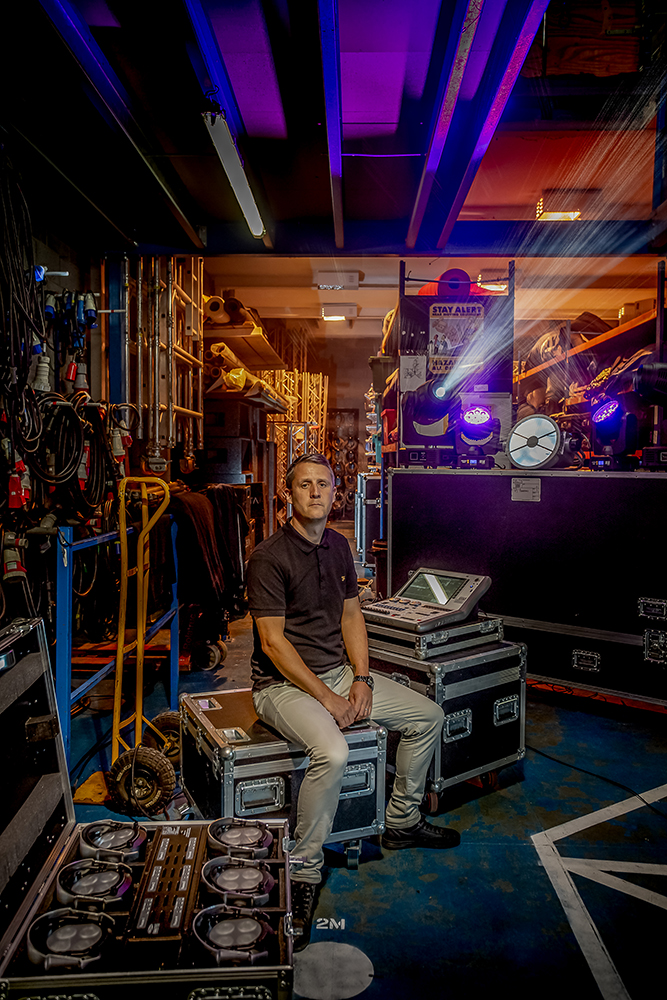 Pictured: “We had to make some difficult decisions,” Simon reflects. (Gary Grimshaw)

“I just got the bug, and I love events, and I’ve never wanted to do anything else since,” said Simon who can count being the video project manager for Labour Party Conferences among his memorable experiences in the industry. After working in the UK where he met his wife, he moved back to Jersey and started working for Delta, becoming Managing Director twelve years ago and owning a third of the business. “I’ve always been the type of person who could never do a normal 9 to 5, and this is not a normal 9 to 5. I love the variation of clients that we work with, I love the variation of events that we work on. I’m still very close to our clients and I still attend the majority of the events we have because I like to see that our standards are maintained. But also, if I’ve worked with a client for six months, I want to turn up on the day.”

And that passion runs through the company with the staff prepared to work long hours and throughout the weekend.

“In a busy year we can do anything from between 850 to 1,000 jobs. An event could be a plasma screen to five people in a boardroom, or it could be the VIP arena at the Weekender Festival, or a dinner for 700 people at Christmas. That's the breadth or scale of the events that we do. In some weeks at Christmas we’ve done 40 or 50 events in a week. That’s what we’d do in a normal year, but it’s not been like that over the last four months.”

And that’s what has made this current situation so difficult to deal with. Staff have been on furlough and the normal hive of activity at Springside was unnaturally quiet.

“We have nearly 20 technical staff working seven days a week throughout the summer – technical conferences, product launches, weddings and parties – so it’s difficult for the guys being at work at the moment because they are so used to being busy. And we are so lucky with the staff we have got because they love what they do, and for us that shines through. Our guys are so talented and passionate it’s difficult for us as business owners to see it so quiet.”

Even though there is very little happening, the staff were brought back on a split basis in July, a chance to boost morale and see each other again. However, some have chosen to get out and start in brand new positions in other industries, a situation Simon understands but regrets.

With large scale events cancelled, including one of the most significant dates in the calendar this year, an opportunity came along which Simon and his team were happy to help with.

They came up with the idea of shinning beams of light from each Parish Hall as it got dark on Liberation Day, some creating the famous ‘V’ for victory, and all projecting a dot of light onto the clouds above. 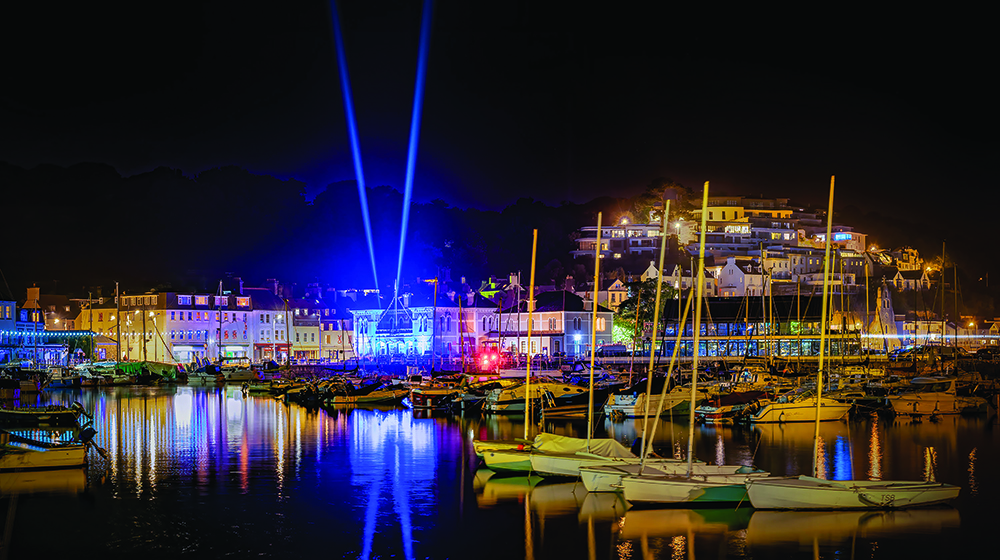 Photo: 'V' for 'Victory' captured on camera by Vince Thorne.

“We love to get involved in projects like that but normally we’re too busy. We had the opportunity to do this, and we wanted to give something back to the community,” said Simon.

Pictures of the light beams looking atmospheric against Parish Halls and Jersey’s skyline were shared and although they could be seen for miles, people still gathered to get a closer look.

“It was just something really great to be involved in. We put it on social media, and we found people were coming out in their garden chairs and sitting in the gardens where we were producing them by the parish halls and just to see and experience it. It was just a nice community thing to do.”

There are plans for further projections and Delta are working with ArtHouse Jersey for a project later in the year.

And there are other areas Simon is looking at. While we’ve all been using Zoom or Teams instead of face-to-face meetings over a coffee, most of us have moved on from the novelty of seeing someone's bookshelves. While acknowledging how useful they are, businesses are now looking at other ways of doing it.

“In the last couple of weeks, we’ve been having conversations with clients who don’t want to use Teams or Zoom. They want to have a meeting like that, but they want to be able to deliver it in a professional manner. So, we are speaking to clients about delivering it by doing a lot of green screening events and making sure the delivery is at a higher standard than what people have accepted over the last three or four months.”

Business is starting to come back, but it’s mostly small private parties, and at about 5% of normal levels, it’s a fraction of what would be expected in peak wedding season. Things are slightly better in Guernsey where the covid restrictions were lifted within the Bailiwick and events could go ahead again.

As Simon and I were having this conversation, the guidelines were about to come down to Level 1 in Jersey - but when that announcement was made in the first week of August, it was clear that the restrictions facing events were to remain throughout the peak wedding season.

“We’ve been trying to speak to the Government to say that they have to give us some guidelines for our industry, but this was six weeks ago. And we saw them working on hospitality and working on tourism. Rightly so, because they are huge for the island. But we had clients saying they’ll put their own event on, but they had to know what we can and can’t do.”

It’s hard not to get the feeling that those in the events industry have felt left behind while others have received support.

“We’ve been working hard with Government and we’re on various events steering groups, but I think we’ve reached the stage where we have to be realistic and understand the guidelines won’t mean events can return in any meaningful way for the rest of this year. And that’s not me being negative. That’s just me being realistic.”

Focus is now turning to whether additional financial support on top of the co-funding payments can be made to help the events businesses who have no choice but to wait until the situation improves.

“Whenever we’re having discussions with government, it’s never about us as a company, it’s about all of us as an industry. That’s caterers, audio visual suppliers, marquee companies, the DJs. We’re trying to seek support for everybody because we know how important the industry is to the quality of life in the island. The Weekender is now not happening, and that will have a detrimental effect on people’s quality of life. So, the events industry is hugely important to the island and I don’t know whether everybody sees that necessarily when they go to these events. And it doesn’t have to be the larger public events, it’s the conferences, they are an important part of people’s business lives, which again is part of their quality of life. We are important to the island’s community.”

This article first appeared in Connect Magazine which you can read in full HERE.