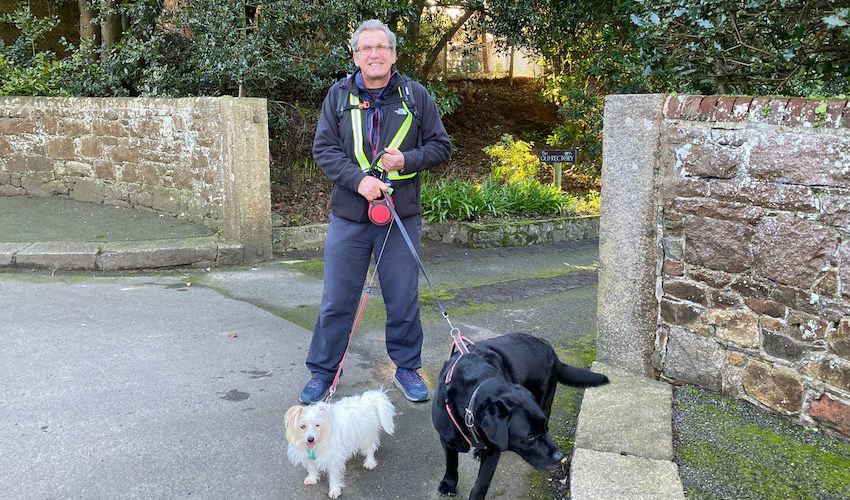 A rambling watchdog's 350-mile charity challenge to walk every road in the island has turned into a trip down memory lane, sparking memories of being a butcher's boy to reflections on Jersey's wartime past.

A keen walker and the CEO of Jersey’s competition regulator, Tim Ringsdore is raising money for Autism Jersey and the JSPCA.

The JSPCA is the regulator’s chosen charity for 2022, whilst Tim is supporting Autism Jersey personally.

He set himself the target of raising a minimum of £1,000 for each charity and has already generated more than £1,600 since starting on 1 January.

“I wanted to take on something a little unique, and to invite other islanders who might not be able to undertake something as long as the Island Walk, but would enjoy seeing a part of their home island that they don’t usually get to see, in bite size walks," Tim explained.

Pictured: Tim was joined by islanders and pooches on Thursday.

“I’m a Jerseyman and yet I haven’t walked every road," he added.

"This is a great opportunity to help these charities but also to appreciate every mile of our beautiful island.

"If there’s one thing that the last two years has taught us, it’s that getting out into the fresh air and experiencing our natural environment, is good for our physical and mental health."

Sparking old memories has also proven to be an additional benefit - on Friday, he ended up on memory lane after taking some back streets into work.

"Came down Columbus Street, which I know very well because back in the 70s when I was 11 years old, I became a butcher's boy for Burton Faye Kavanaugh, who ran the shop behind me here," Tim explained in a progress update video posted to Facebook.

"I spent many happy years with them. Being a butcher's boy on a Saturday and delivering around all these back lanes. So a bit of nostalgia today."

The walks have also offered an opportunity to reflect on the island's history.

Throughout, Tim has been inviting islanders to join him. On Sunday, it was the turn of local historian Ian Ronayne, who led him on a tour around St. Ouen, home to Jersey's largest concentration of German fortifications, both on the beach and to stop attackers reaching the high ground.

The walk visited some of these remains, as well as take in the tranquil setting of St. Ouen’s Church where Ian recounted the tragic impact of earlier conflicts on Jersey’s oldest families.

Pictured: Historian Ian Ronayne joined the walk over the weekend.

Tim will be posting a schedule of his routes, so that anyone who wishes to do so - two and four-legged - can join him and get to know a part of the island that they aren’t familiar with. Tim is going to keep a tally of not just how many miles he’s walked, but also the dog miles.

“We’re very grateful to the JCRA for the support they have given us as their chosen charity, but in this case Tim really is going that extra mile for us!" Michelle Parker, the Animal Shelter's Fundraising Manager, said.

"We wish him well with the endeavour and we’re asking all our supporters to cheer him on.”

Lesley Harrison, Head of Charitable Services for Autism Jersey, commented: “This is a magnificent effort on Tim’s part, and I’m sure everyone involved with Autism Jersey is going to get right behind him – literally in some cases!"

Pictured: Tim's progress after a couple of weeks.

"We’d urge people to get out there and do some of the walking with Tim and raise as much awareness as possible of the challenge," she added.