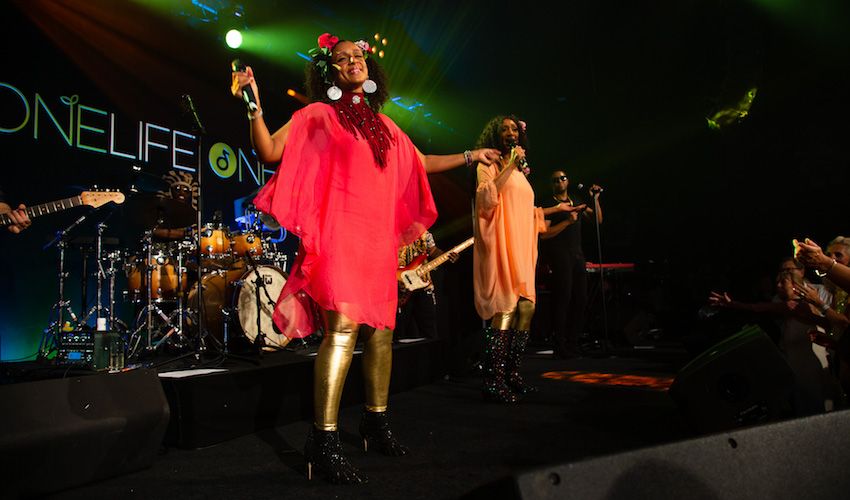 70s disco legends Sister Sledge got local conservation supporters ‘lost in music’ over the weekend as they performed a set to celebrate the zoo’s 60th anniversary.

Performing hits such as ‘Lost in Music’, ‘Good Times’ and ‘Thinking of You,’ sisters Debbie and Kim Sledge took the stage at Durrell’s Wilderness Ball on Saturday to raise money and celebrate the zoo’s 60th anniversary year.

They weren’t the only stars amongst the line up at the wilderness ball – explorer, TV presenter and Durrell’s newest Ambassador Monty Halls hosted the evening and an auction raised funds for the zoo led by BBC antiques expert David Harper.

Organisers said the evening took guests “on a journey of discovery, showing them the power each and every one of us has to heal the planet and protect both people and wildlife.”

Singing in front of a backdrop which read “one person, one life, one species,” Sister Sledge reinforced this sentiment during their song ‘Thinking of You.’

This isn't the first time the sisters have performed in Jersey after they took the main stage at the Weekender music festival in 2018.

Commenting on the evening, CEO Dr Lesley Dickie said: “The Wilderness Ball was an incredible event and an opportunity to raise vital funds for our work saving threatened species all over the world.

“It was also a fantastic celebration of Durrell’s 60th anniversary and highlighted that, given time and support, we can achieve our goals, save species and habitats, inspire generations and reconnect them to the natural world. I would like to thank the companies and individuals that made the event possible, our wonderful guests for attending and celebrating with us, and Investec for their generous support and committed enthusiasm for our cause.”

The event took place at the Royal Jersey Showground and was sponsored by Investec. Their CEO added: “Investec has long been a supporter of Durrell and their vital conservation work globally. We have been privileged to have had hands on experience with the animals at Jersey Zoo and seen first-hand how important it is for the future of the planet. Congratulations to Durrell for organising a wonderful evening of entertainment on a spectacular scale.

“It has been a pleasure to sponsor this event and we trust the funds raised here will continue the work to protect endangered species and the diversity of the world we live in.”