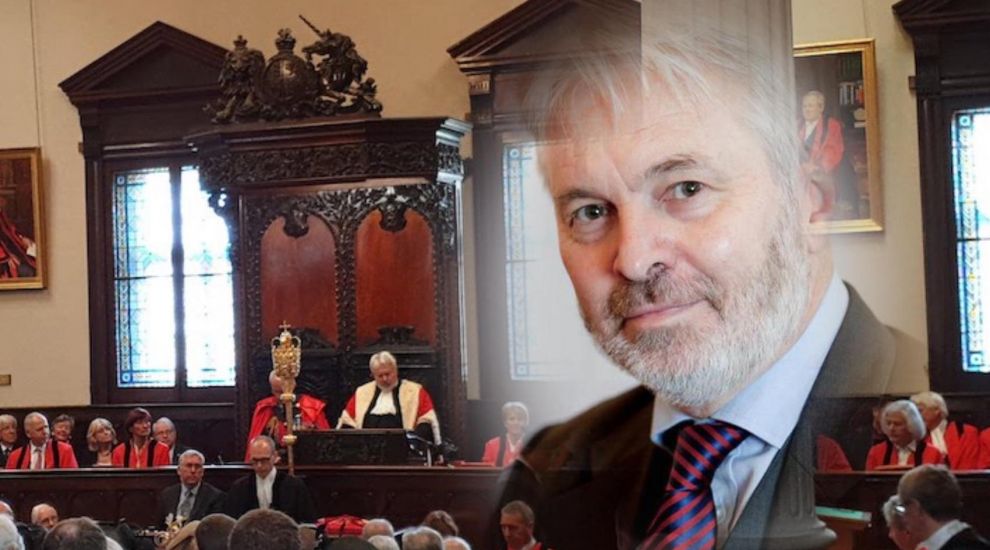 Jersey's new Bailiff is a sword-wielding, singing Welsh speaker with a penchant for armour and an unconventional take on 'dress down Friday', it emerged as he was sworn in.

Tim Le Cocq is the island’s 90th Bailiff, succeeding Sir William Bailhache in the role, after taking his Oath of Office yesterday.

He was joined by His Excellency, the Lieutenant Governor, Air Chief Marshall Sir Stephen Dalton, members of the Court, including the Commissioners, Jurats and representatives of the Law Officers’ Department; States Members, former Bailiffs and other officials also joined his family and friends for the ceremony.

Video: Tim Le Cocq was sworn in as Bailiff in front of a packed Royal Court.

After presenting the Letters Patent signed by Her Majesty Queen Elizabeth II, Mr Le Cocq took his Oath of Office, in which he swore allegiance to the Queen and undertook to uphold the laws and freedoms of the island.

He then retired, before returning in his official robe to take his seat. Officials then stood up to shake the new Bailiff’s hand. 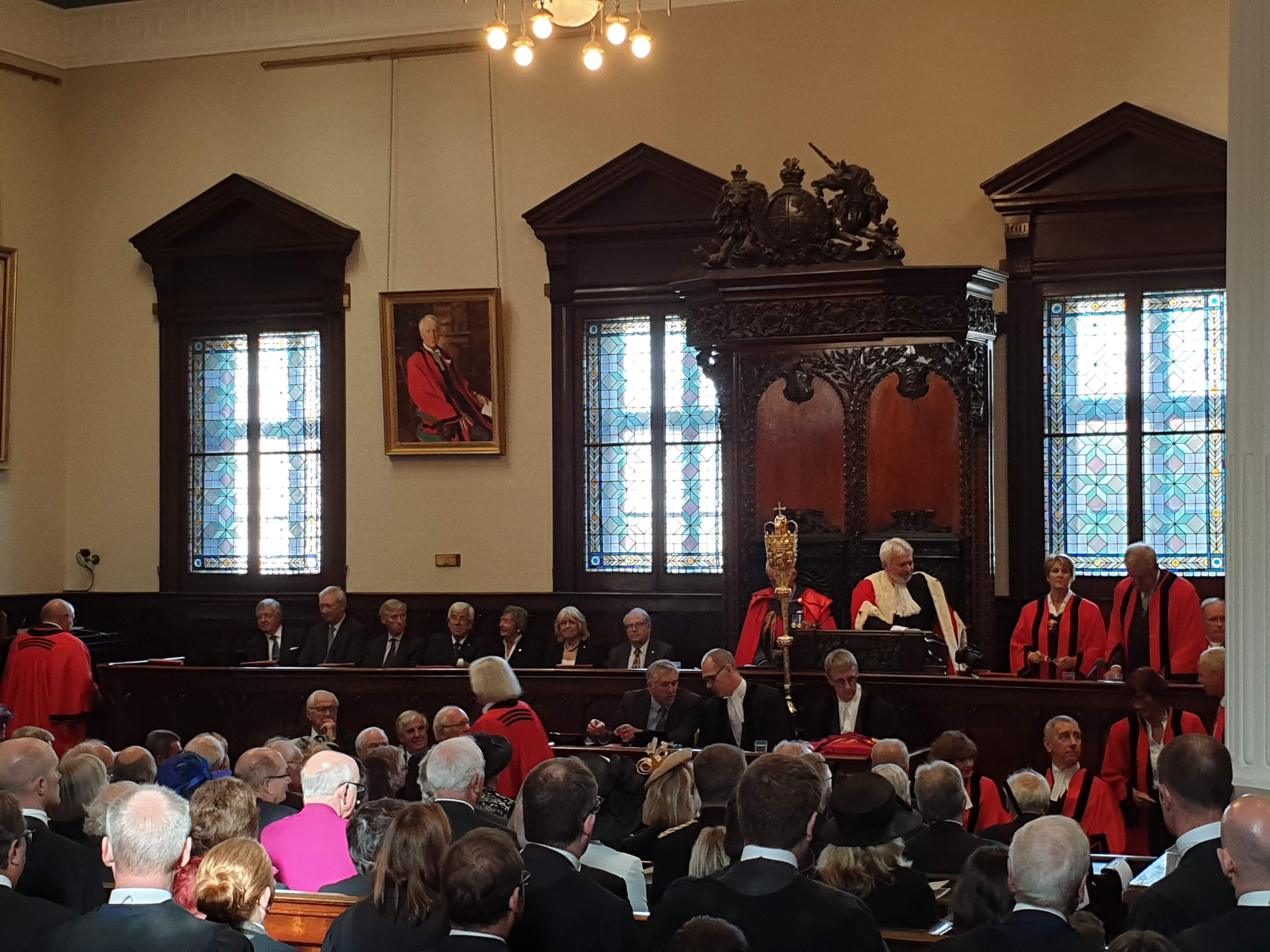 Pictured: The Lieutenant Bailiff, Jurat Anthony Olsen, revealed the Bailiff keeps a collection of swords in his office.

But despite the ceremonial nature of the event, speeches injected a good dose of humour into the proceedings, whilst revealing some secrets about the Bailiff.

Jurat Olsen discussed Mr Le Cocq’s hobbies, which include singing in a choir and a baritone quartet, studying Welsh and dressing up as a knight in armour.

“I had to do a double take on seeing you dressed in chainmail and wielding a huge broad sword engaged in a dubious battle on some muddy field,” Jurat Olsen recalled.

He then went on to reveal that the Bailiff keeps a collection of swords in his office, adding he hoped he had “no intention of drawing these weapons to subdue the sentient jurats.”

Looking at the portraits of former Bailiffs hanging in the Royal Court, the Chief Minister remarked that Mr Le Cocq had already made his mark as “ the first bearded Bailiff of the 21st Century." 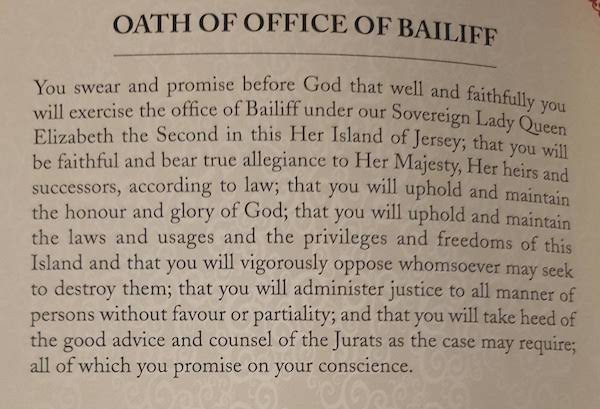 Pictured: The Oath of Office of Bailiff.

The Attorney General, Robert MacRae, then talked about how Mr Le Cocq had revolutionised the Law Officers' Department, which he joined in the 1990s as a Crown Advocate before moving on to Solicitor General and later on Attorney General.

The Attorney General mused that Mr Le Cocq had reluctantly introduced ‘dress down Fridays’, but had been initially surprised by how staff had interpreted the idea.

“Because, Sir, your idea of dressing down is smarter than most people wear when dressing up,” Mr MacRae explained. “Dress down Friday for you, Sir, involves a single-breasted suit.” 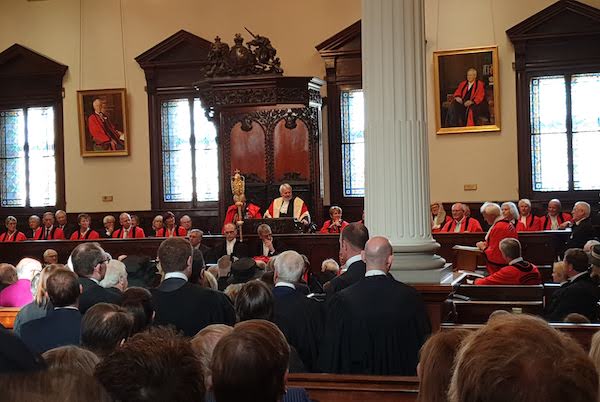 He also mused on the Bailiff’s collection of swords, adding words of hope that he wouldn’t be required to draw his sword in court and “threaten to run the Governor through."

“But, Sir, if it comes to this, we’ll know that you are well prepared,” the Attorney General added. “Not only you must be the first Bailiff for many centuries not merely to own a collection of swords but also a full set of armour. So, we can now rest now at bed with some certainty that our new Bailiff is well-equipped.”

But the ceremony didn't only reveal truths about the island's new head judge.

The Attorney General concluded his speech revealing that he - the man set to become Deputy Bailiff - owned a full-size Dalek, a fictional extraterrestrial robot from the Doctor Who series. 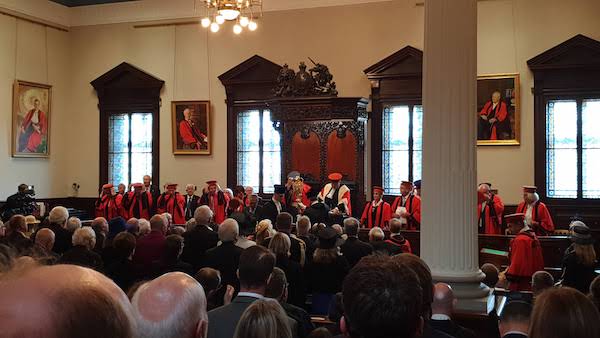 The Batônnier, Advocate David Cadin, also talked about the Bailiff’s affinity for swords and reminded everyone it was not “an invitation to bring back trial by combat."

He then went on to rank the Bailiff’s performances against that of other judges, noting that out of the 1,257 judgments pronounced since his appointment, he had pronounced 271 - 21 fewer than “consistent super-performer” Royal Court Commissioner Julian Clyde-Smith.

But while praising his judgment track record, Advocate Cadin did have one gripe: the length of judgments written by the new Bailiff.

In future, he joked that he ought to consider making them shorter, as "time is money."

He also voiced hopes that the Bailiff would drive the agenda for diversity, based on the fact he had not only attended a boys' school, De La Salle, but was also listed on Wikipedia as being an alumnus of girls' school, Beaulieu. 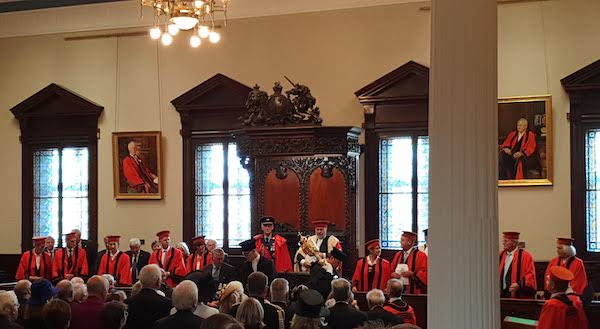 In his own speech, the newly sworn in Bailiff mused that he had prepared starting with the words "Mr Bailiff, Your Excellency..." "It was only when I began to write it down this weekend that I noted the mistake and the reality of the situation came home to me," he added.

He described his seemingly elevated seat as "humbling" and also "a little intimidating" surrounded as he was "by the portraits and in some cases the physical presence of the talented, committed and courageous people who have sat here before me."

After thanking his family, friends and the several officials who attended his swearing in, the new Bailiff expressed his love for the island. "I was born in Jersey, it is in my blood, and I am grateful to be a son of this island."

Pictured: "I could imagine no better place," the Bailiff said about Jersey.

He went on to say he was grateful for Jersey's natural beauty, saying he could imagine no better place; the local traditions and history, as well as for the community, and how "we so often care for one another and how we reach out to extend our caring, outside our shores through overseas aid or otherwise."

"Do I think that we are perfect and cannot be improved?" he added. "Of course not! We can always do better. We should always be vigilant to protect our freedoms, environment and the openness of our society and those who are vulnerable in it.

"But we have a lot to be grateful for and much that is worth defending."

CLICK BELOW to read the Bailiff's speech in full... 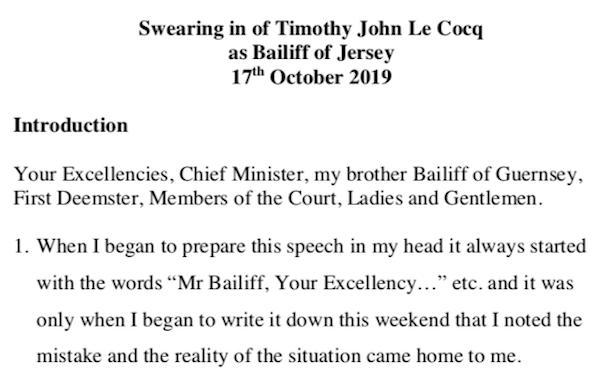