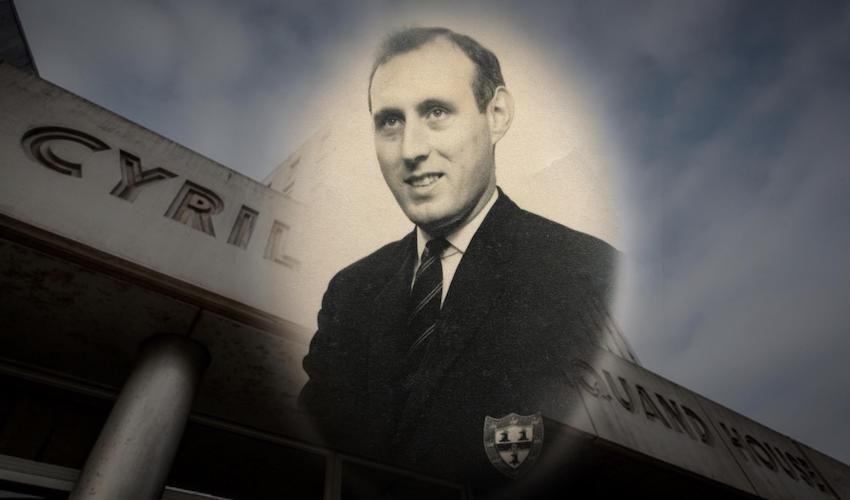 Tributes were paid to the ‘architect’ of Jersey’s finance industry at his funeral today, including an address from the Bailiff who remembered the esteemed advisor’s “international personality” and “extraordinary contribution” he made to the island.

At what was termed as a ceremony of celebration and thanksgiving for the life of Geoffrey Colin Powell CBE – known as Colin Powell – the Bailiff Sir William Bailhache shared several fond memories of him as his loved ones gathered at the Town Church to pay their respects.

Sir William opened his speech by acknowledging “the sadness we all have at the loss of an invaluable friend and colleague”, as well as giving “thanks for the quite extraordinary contribution Colin has made to Jersey, his adopted home.”

Pictured: Further tribute was paid to the highly-regarded economist at his funeral today.

The service took place this afternoon at the Town Church where many family, friends and colleagues attended to honour Mr Powell’s memory. Tributes have poured in for the former Financial Services Chairman since he sadly passed away on Monday 13 May.

Amongst these were the words of former Chief Minister Frank Walker who spoke fondly of the Cambridge-educated economist, without whom, he said, Jersey would be “much poorer.”

This was reiterated by the Bailiff who said, “however challenging present circumstances are, the island would be in so much worse a place without his vision, his imagination and his commitment.”

Honouring Mr Powell’s “first rate intellect” and “unmatched work ethic,” the Bailiff went on to share some more personal anecdotes of his working relationship with the economist. One such memory recalled Mr Powell’s “personal charm in delivering some hard-nosed messages.”

Sir William recounted: “There was once a difficult meeting with EU officials at which Jersey’s low level of tax was being criticised. The German tax official was being particularly aggressive and fired a direct question to Colin: ‘Since when has Jersey had a 0% tax rate for foreign controlled companies?’

“As cool as a cucumber, Colin, his eyes apparently wide and guile-less, replied, ‘Since the Kommandant of the German Occupying Forces approved it in 1943.’ The German official did not say another word."

The Bailiff echoed the sentiment of those who have hailed him as having engineered Jersey’s success as a financial centre, saying: “It is inevitable that the tribute I give him started with international discussions because they have been necessary to defend Jersey’s financial services industry and Colin was undoubtedly the architect of its growth.”

Sir William pointed out that in 1969, when Mr Powell was appointed as Economic Adviser to Jersey’s Government, “GDP [Gross Domestic Product] was estimated at £1,069 per head… and at £54,000 per head when he left the job of Chief Executive in 2000.”

In his address, the Bailiff made much of Mr Powell’s half-a-century career, but also his character, describing him as “likeable” and “generous” before bringing it to a close with a grateful thought: “Men like Colin Powell come along only rarely. In Jersey, we are so fortunate that he came to us and that he liked us enough to want to stay. So for all of us, the States and people of Jersey, I just say, ‘Thank you, Colin, and Godspeed.’”

Elsewhere at the ceremony, a eulogy written by members of his family was given by his daughter, the congregation sang hymns including ‘Make me a Channel of Your Peace’ and ‘Morning has Broken’ and several poems and extracts from Scripture were read.

Those who attended his funeral were encouraged by the family to contribute their own memories of Mr Powell on a card in the Order of Service brochure.

After the family’s private committal, a reception was held at St. Brelade’s Bay Hotel.

Following his funeral, NSPCC Chief Executive Peter Wanless said of Mr Powell: "Colin Powell was an inspirational, genuine man who was passionately committed to doing whatever he could to protect children from harm.

"His many years of invaluable work with the NSPCC have helped us keep thousands of Jersey's children safe from abuse and neglect. That legacy continues and we will always be immensely grateful for Colin's kind and generous support. Our thoughts and prayers are with his family."

Read more about one of Jersey's most influential civil servants...

"Without him, Jersey would be a very different place" - a former Chief Minister remembers how Mr Powell "saved the day" for Jersey on more than one occasion