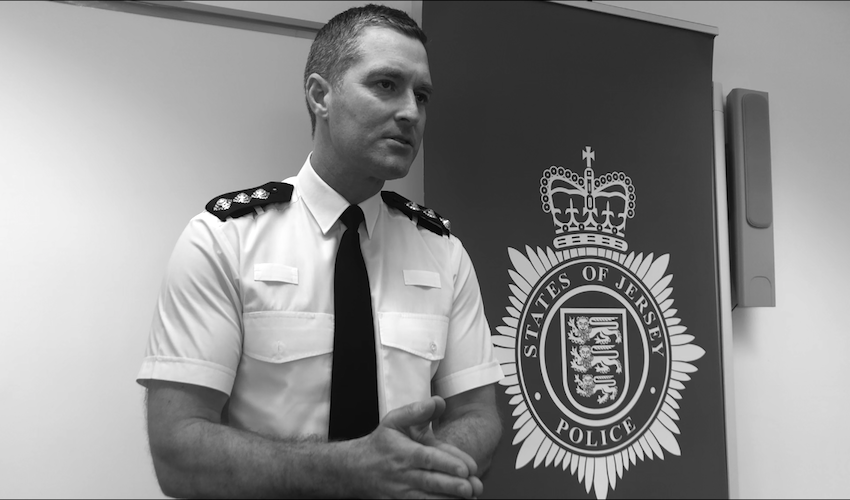 The Chief Inspector leading a local crackdown on organised crime has admitted “law enforcement on its own does not work”, as he launched an awareness campaign working with schools, probation and customs to warn about the dangers of drug use.

The announcement came from Chief Inspector Mark Hafey at the official launch of 'Operation Shark' this morning.

Efforts to scale up the approach to drugs-related activity in the island comes on the heels of the tragic death of a nineteen-year-old last weekend after suspected MDMA use.

Pictured: The nineteen-year-old died after suspected MDMA use last weekend.

James Le Bourgeois became the second local person to die after suspected use of the drug in the last six months following the sad passing of Ashleigh Thomas Green in August last year.

The campaign has already seen Police raid a number of properties under the Misuse of Drugs (Jersey) Law, seizing significant quantities of drugs and cash believed to be the proceeds of crime in the process.

As well as taking steps to make drug dealers “paranoid” by increasing the number of plain clothes officers on patrol, encouraging more stop-searches and inviting the public to be the force’s “eyes and ears”, ‘Operation Shark’ hopes to avoid the “sticking plaster” approach to cracking down on drugs.

Speaking to Express about the plans, Chief Inspector Mark Hafey – the officer leading the operation – emphasised the importance of working with ‘partner’ agencies including Education, the Probation Service and Customs.

“We know that if we were to work in isolation we would potentially make a difference for a short time, but we know that law enforcement on its own does not work. We cannot law enforce our way out of this, therefore the education piece works hand in glove with what we are going to do.”

He explained that whilst the Police can “make arrests, seize the drugs, seize people’s assets and put people before the court”, the other services offer “skills and expertise from their world” which contribute to a more joined-up approach.

“That’s how you get a bigger impact,” the Chief Inspector remarked.

“If we worked in isolation yes we’d make an impact but it would be short-lived and effectively it’s like putting a sticking plaster over something. By all working together we’ve got a far greater chance of actually coming up with a more permanent solution and making a bigger impact.”

Pictured: The operation has already resulted in seizures of quantities of MDMA, cocaine, cannabis and cash (States of Jersey Police).

Speaking more generally about their renewed efforts to clamp down on drugs in the island which has so far resulted in the seizure of quantities of MDMA, cocaine, cannabis and cash, Chief Inspector Hafey said: “We will be more dynamic, we will be more robust, we will execute more warrants than we normally do. We’ve taken people out of other areas of policing and put them in the pro-active crime team.

“Our uniform colleagues have been asked to have more conversations with the public around drug use, encouraged to use their powers when it’s appropriate to do so in respect of stop-search and generally seek to refocus the force on this particular area.”

Islanders are also being warned of the dangers of taking MDMA in a new government campaign which reads: “They won’t tell you the party could end in intensive care.”

For those who do still decide to take the Class A drug, the Police have also issued advice (CLICK HERE) on how to do as safely as possible.

Police are now urging islanders to get in touch if “something doesn’t look right” and to save their non-emergency number (01534 612612) and the anonymous Crimestoppers phoneline (0800 555 111) into their phones.

People can also report anonymously through Crimestoppers via their online form.

"Your eyes and ears can be more far reaching than ours, so if you hear or see anything suspicious, please call us," Chief Inspector Hafey said.

Their message to drug dealers, meanwhile, is: "We will catch you, and you will pay dearly."

Posted by William Boyd on Feb 24th, 2020
We lost the war on drugs everywhere because it was not fought. The economics of drugs is that pushers and suppliers sell to a market. No market, no pushers. It was apparent early on that the authorities decided not to punish the end user i.e. those who consumed drugs. Probably because a lot of them who were being caught were our so called betters and the children of our so called betters. After all 'it's just a bit of fun isn't it?' They then exerted the pressure not to punish the users. Can't have Tarquin and Cressida with a criminal record after all! Result? An insatiable market because the users know they will not be punished and there will always be a scion of society willing to take the risk to make big bucks. The war on drugs never really started.
Posted by David Kingham on Feb 26th, 2020
Agree William Boyd, however both the Police and the Border Control Authorities should treat the Drug issues of Jersey as their main priority, surely it is one on the single biggest issues facing our youth and there should be major efforts made to attack this problem at source, tighter controls at the Ports and Airport is imperative, trouble is most of the officers are only interested in if you've got more contraband than your alliwance, wheres the Dogs and plastic gloves brigade?
To place a comment please login Login »