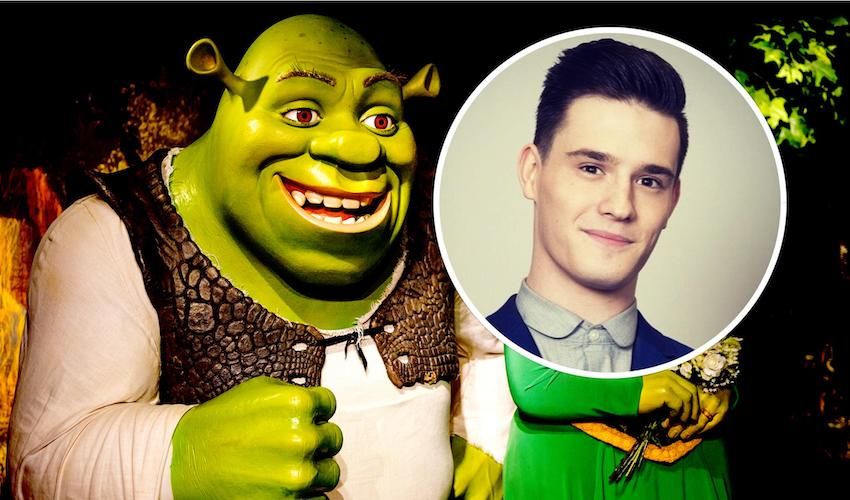 From Shrek the Musical to Elf… One of Jersey’s oldest drama clubs is going even greener in its 110th year, as a fresh face takes the role of chairperson.

Now settled into his new position, Ryan Williams (25) is on a mission to make the Green Room Club more modern and attract new talent, on stage and back stage, with a mix of modern and well-loved musical and pantomimes.

Ryan joined the club’s Management Committee in 2014, first as a Digital Manager then moving on to Business Manager, a role he has held for the past two years and will continue to hold in addition to his new role as Chairperson.

Interested in music theatre since a young age, Ryan has also been actively involved in the Club’s productions, in both performance and stage management.

“I joined the committee in 2014. I think what they wanted was a more diverse committee,” he explained. “I worked my way up from the performance, to normal committee member and then the management committee.

“I’ve seen all aspects, I enjoy all of it, it’s so diverse. One minute I can be on stage, the next minute I can be back stage or looking at finances and now chairing meetings and making the right decisions for the future of the club.”

Over the past two years, Ryan has been focusing on redeveloping the well-established club, which celebrates its 110th anniversary this year.

“My job was to make sure the club was producing musicals and pantomimes the audience would be excited to see,” he explained. “I was also involved in trying to make it into a more modern club and looking at new opportunities for new shows and new talent.”

“It’s an exciting time to join the committee as Chairman,” Ryan added. “We have a wealth of fantastic productions coming up, including Cinderella, Ghost the Musical, Shrek the Musical, and Elf the Musical.”

Explaining the choice of the shows, Ryan says it’s all about finding a balance between current, modern productions and the well-loved ones to attract as many audience members as possible.

The mix has worked well for the Green Room Club. Over the past four years they have been “fortunate” to make a great profit on all the shows, with ticket sales on the rise.

But, to help put on these shows, Ryan is keen to attract new talent both on stage and backstage. Productions usually require a cast of 15 to 40 performers, as well as a team of 15 people behind the scenes. Finding creative people is a challenge the club face with all productions and as such is always looking for more to join the ranks.

“My focus is to grow the Club’s membership by attracting talented new performers and creative volunteers to join our existing loyal members, whilst looking at wider development opportunities to ensure continued success for the Club for the benefit of the local community,” Ryan said.

Auditions for Cinderella are taking place from tomorrow until 29 August, followed by those for Ghost in September. While it might seem like a mere hobby for most, Ryan says that performing in an amateur club can open professional avenues.

“We are looking for individuals interested to be on stage or backstage, creatives that can help with costume designs, making set designs, building sets,” he said.

“We are open to people willing to learn or who want an insight into theatre, and we will offer training opportunities. We have had people in the past who joined us through panto to get involved then went into university and pursued backstage work as professionals. It’s nice to know we are inspiring them to do so.”

“It’s all voluntary,” Ryan added. “We all do it for the love of the club.”