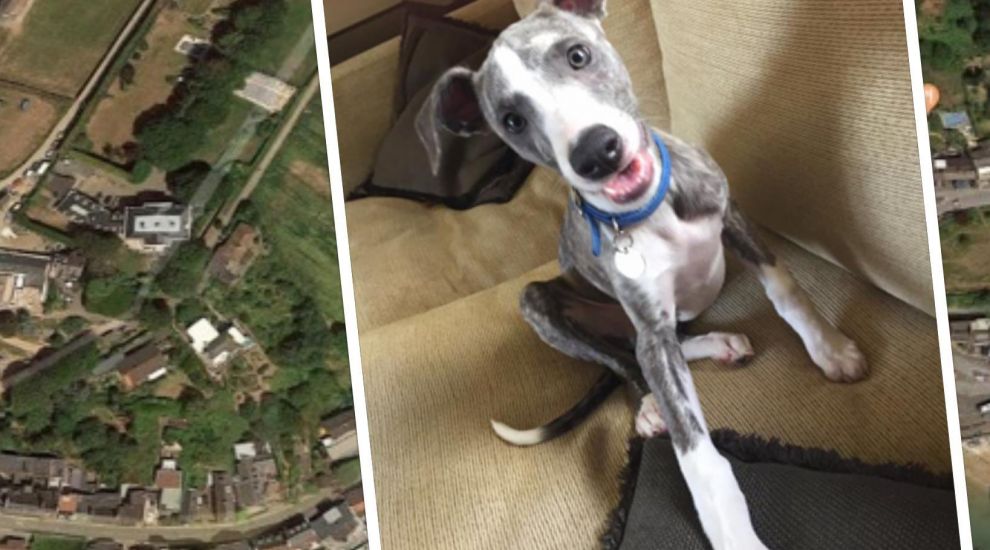 Drones, sensors and even BBQs have all been called upon in the hunt to find a missing 10-month-old whippet - but the young canine is still yet to be found, one week after disappearing.

Monty's family say that they are "not giving up" on finding their beloved pup.

The white and grey whippet, who had been on holiday with his owners Roderick and Edita Collins, ran away on the morning of Tuesday 20 February.

He had been playing with the couple’s dog in their daughter’s Mont Mallet-based home in St. Martin when he was accidentally let outside by the cleaner. The other dog returned, but Monty never made it back.

Monty’s disappearance has since sparked large-scale searches both in the area and across the island. Hunts for the young pup are being backed by the 3,000-strong Jersey Dog Forum community, and a dedicated Facebook group has been set up with more than 670 islanders taking part in the effort. Rhona’s Café even offered searchers free cups of hot chocolate in return for their help.

Pictured: Monty is a young dog at just 10 months old.

Drones were sent over fields in the region of Rue de la Pouclée et des Quatre Chemins over the weekend, but stopped after conditions became too windy to operate the devices. Last night, the search collective discussed how an infrared camera could be incorporated into future efforts.

The Collins family are also receiving support from the business community. A £600 reward was initially offered for anyone who can ensure Monty’s safe return, but that was upped to £800 following a donation from QuidsIn. A further £600 has now been added to the reward, taking the total to £1,600. The owners say they'll simply be happy to have Monty back - "no questions asked."

Hundreds of flyers printed in English, Polish and Portuguese have been plastered across the island, and Jersey Post have now offered to distribute 2,000 posters by mail across St. Martin this week, according to daughter Antonia Collins.

With one week having passed since Monty’s mystery disappearance, islanders are now turning to less conventional finding techniques too. Several people living in the area started ‘dog food’ BBQs in a bid to attract Monty by smell. Many have also changed their profile pictures to a photo of Monty to help spread the message.

In a statement posted on the ‘Search For Monty’ Facebook page, one of the owners’ daughters, Rebecca Collins, warmly thanked islanders for their help.

Although her parents “sadly” had to return to the mainland, she said that they would be on their way back “ASAP” to continue their investigations.

“The search is continuing with full vigour. We are not giving up,” she commented.

Q&A: Swimming 'fur' a good cause