"We survived but it was a close call" 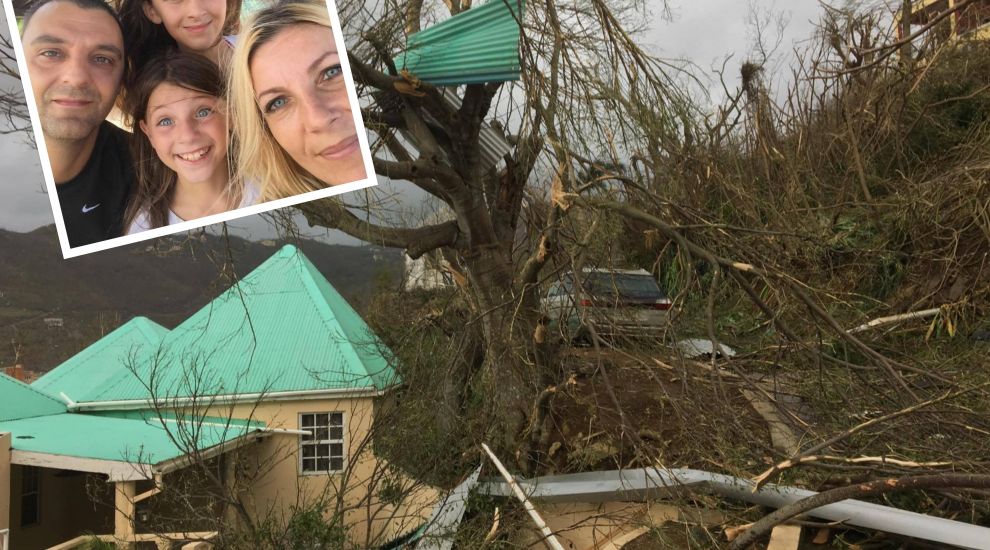 "We survived but it was a close call"

A former Jersey resident, who left the island with his wife and two daughters in October 2016 to move to the BVI, has described how his family survived hurricane Irma thanks to their bathroom door.

Former Elian compliance manager and army reservist, John White was waiting to be evacuated to St Lucia in the east of the Carribbean, with his wife Marta and daughters Amy and Jessica when he spoke to Express on Monday.

Born in Sunderland, Mr White lived in Jersey for 12 years and still calls the island home. He and his family moved to Road Town, the capital of the BVI, in October last year. Like many others, Mr White's family was unable to get in touch with anyone in the aftermath of hurricane Irma as all communications went down. They have since been restored but communication is only available in town while Mr White is staying in the hills in the house of one of his co-workers to whom he owes everything. "Without him and his family we would have nowhere," Mr White said.

Speaking to Express on Monday, Mr White explained the family was waiting to be evacuated to St. Lucia. He commented: "I am pleased to say that we survived Irma, but it was a close call. When Irma hit, my roof blew off as if it was made of paper and all the windows of the house were destroyed. One of our doors blew in and the other was sucked outside and flew off." 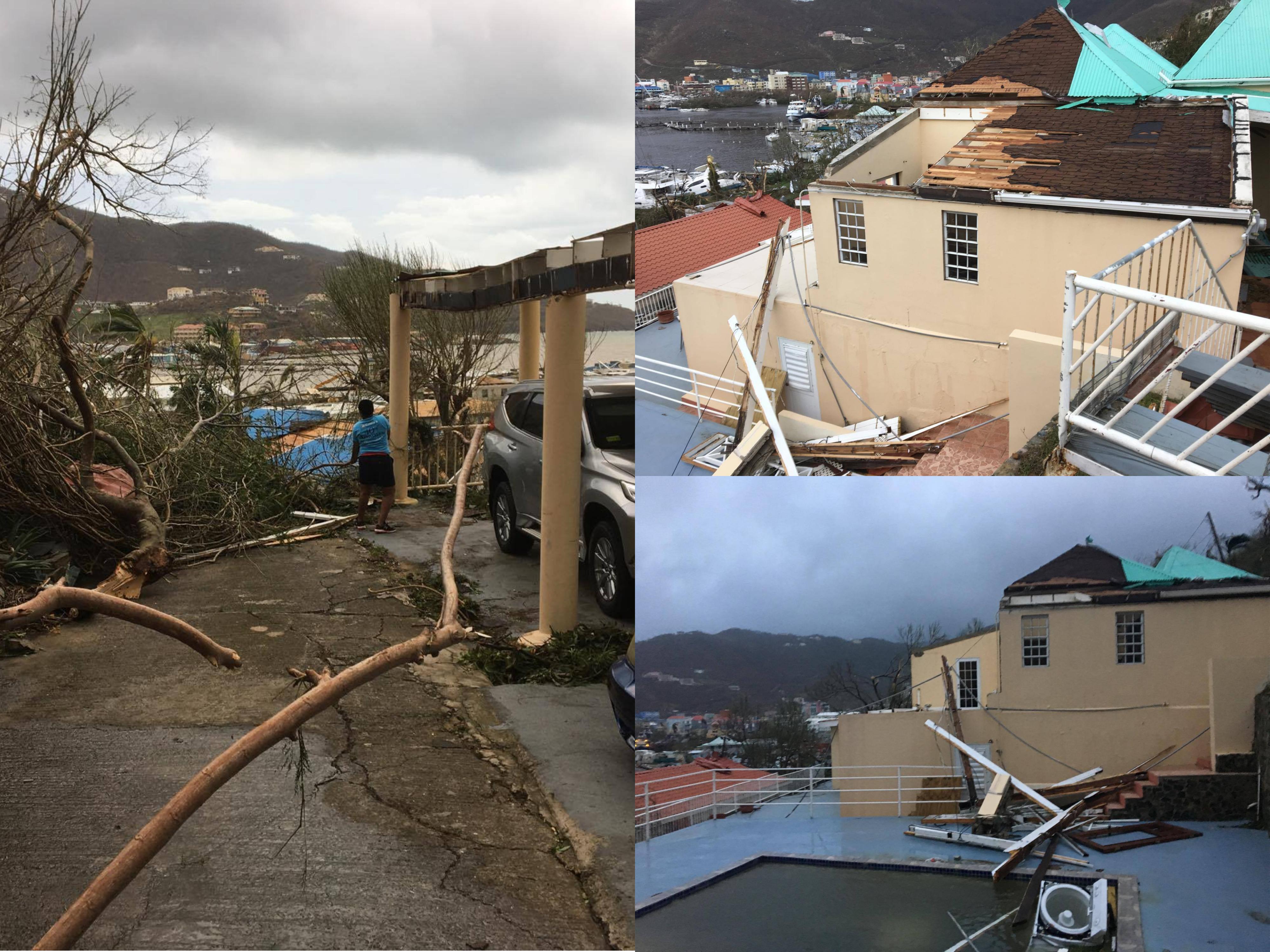 Pictured: "My roof blew off as if it was made of paper", said John White.

The father of two described how the family and their puppy found shelter with two neighbours in a small bathroom, the only safe room in the house. He said: "The two children, Amy (8) and Jessica (11) were in the bathtub with their mother Marta. I was bracing the door whilst a neighbor scooped the rising water from the floor down the toilet to keep us from flooding. Had the door not held we would have been dead."

Mr White said he had "no words to describe the power of Irma or the destruction that she left in her wake." He explained that the eye of Irma was so large that for approximatively 40 minutes, it looked like a perfect sunny day. When the tail hit Tortola, things took a turn for the worse. "The island is decimated," he said, adding that looting began almost immediately. Mr White added: "The UK marine arrived on Sunday so hopefully order will be restored soon. The prison was also damaged and we understand that the prisoners are at large."

JT's former managing director, Tim Ringsdore and his wife Shona, who also live in Tortola said they were feeling scared because criminality is becoming a problem on the island. Their daughter Katy said they were "desperately trying to get off" and "trying to stay away from crime." 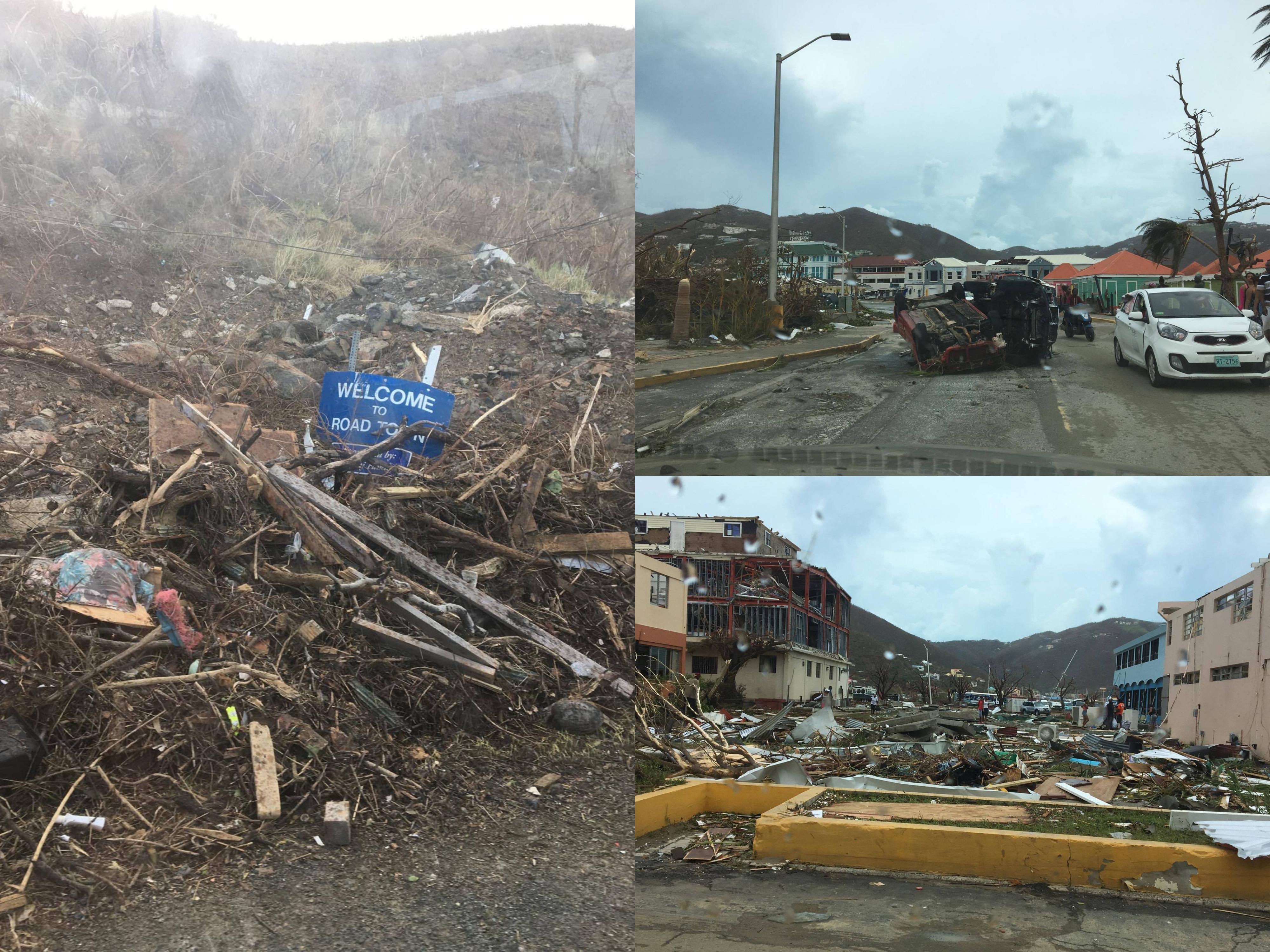 Pictured: Irma left a trail of debris in its wake.

In the midst of the chaos and debris left in the trail of the hurricane, Mr White is trying to stay positive. "We are just pleased to be alive," he confided. "It is reassuring to the see most of the locals that have lost everything come together and care for each other. Everyone is just pleased for life, although I am certain that lives have been lost."

A Jersey disaster appeal was launched by the Bailiff, Sir William Bailhache on Monday to help the thousands victims of Hurricane Irma who have been left without homes, food, and clean water.

Donations made to the Appeal will be targeted to supply essential aid to the most affected Overseas Territories and other impoverished islands. This will be coordinated with the response of Jersey Overseas Aid (JOA) which has offered an additional 'pound for pound' (capped at £100,000) donated to the appeal.

The Bailiff announces a Jersey disaster appeal to help those affected by #HurricaneIrma - give by cash cheque & BACS pic.twitter.com/Fxm1UuR3Xa

The Bailiff said: “Over the past week we have seen damage and disruption of the communities in the region, including Barbuda and reaching across to Haiti. An international aid response will ensure that those affected will receive immediate support, for Jersey we can help by supporting projects that will follow and help communities rebuild, particularly communities lacking key infrastructure and finance.

"Our thoughts are with the families who have lost loved ones and those who continue to be affected following this widespread disaster. Jersey has a number of people in the region and we should pray for their safety and wellbeing during this challenging time."

Deputy Carolyn Labey, Chair of Jersey Overseas Aid (JOA), added: "JOA is happy to contribute and match fund the public’s response to this emergency through the Bailiff's Appeal. As Islanders we can all relate how cut off and devastating this experience must be for the Island residents which have been hit and in some cases their homes destroyed by the hurricane."

Donations to the Appeal can be made by cash, cheque (payable to ‘States of Jersey – Hurricane Irma disaster appeal’), credit/debit card or bank transfer (HSBC Bank, States of Jersey T/A Jersey Disaster Appeal Hurricane Irma, sort code: 40-25-34, Account: 91663933, IBAN: GB80MIDL40253491663933). Donations can also be made over the counter at the States Treasury Cashiers, on the ground floor of Cyril Le Marquand House, open Wednesday to Friday from 09:00 to 14:00.

Islanders can also make material donations at the collection site set up by Ports of Jersey at the Airport Cargo Centre in St. Peter between 08:00 and 15:00 today. Dozens of donations were made on Monday prompting Ports of Jersey to send "a sincere thank you." Essential items such as ater purification tablets, tinned food, first aid kits as well as building materials are still needed.

JT also joined the local response to the destruction caused by Hurricane Irma by waiving all roaming charges for any JT customer caught up in the disaster until they can return.

Keep calm – it’s not the apocalypse