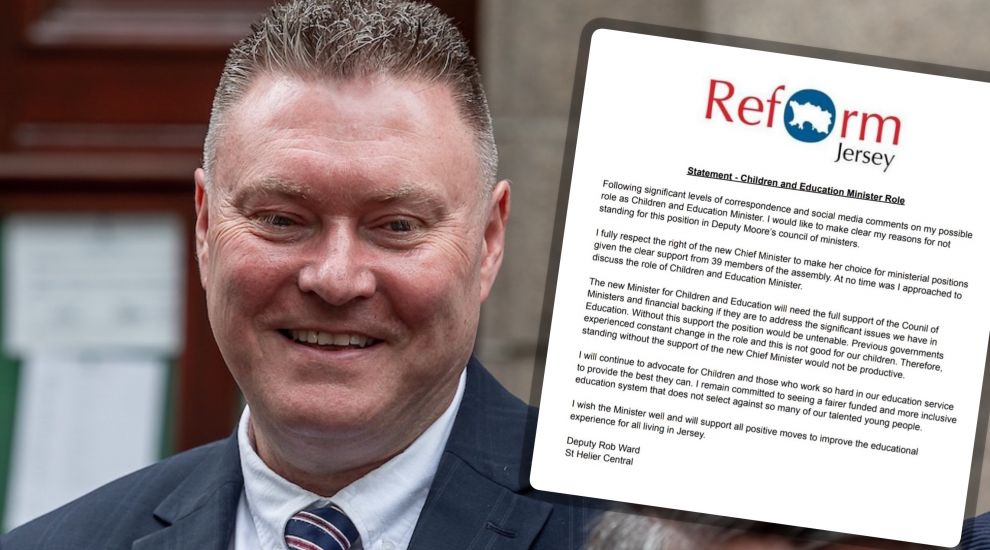 A former teacher and leading Education Scrutineer has revealed why he decided against standing for the role of Education Minister.

However, in a statement posted shortly before 11:00 this morning, Deputy Ward clarified why he had decided against standing, saying:

"I fully respect the right of the new Chief Minister to make her choice for Ministerial positions given the clear support from 39 members of the Assembly.

"At no time was I approached to discuss the role of Children and Education Minister.

"The new Minister for Children and Education will need the full support of the Council of Ministers and financial backing if they are to address the significant issues we have in Education.

"Without this support, the position would be untenable.

"Previous governments experienced constant change in this role and this is not good for our children. Therefore, standing without the support of the new Chief Minister would not be productive."

Deputy Ward added, however, that he will "continue to advocate for children and those who work so hard in our education service to provide the best they can."

He said he also remains "committed to seeing a fairer funded and more inclusive education system" and added that he wished the new Minister, Deputy Inna Gardiner, "well".

It comes after Reform Jersey - which doubled its number of seats to 10 in the election - claimed there had been "no dialogue to actively explore options" for any of their members to hold Ministerial roles within the new Chief Minister's government.

This was contrary to comments made by Deputy Kristina Moore, who said the party had "made it clear" that they did not want to serve on her Council of Ministers.

So far, Deputy Moore has had eight of her preferred slate of candidates appointed unopposed. The only one to face challenge is Karen Wilson, who has been nominated for the role of Health Minister by Deputy Moore. Deputy Andy Howell is also going for the role.

Posted by Dave Mathews on Jul 11th, 2022
Even though Reform Jersey now have 10 seats you have to question whether they have any muscle in the Assembly at all.
Posted by Jon Jon on Jul 11th, 2022
Do think Reform are just waiting in the wings with their knives being sharpened, amazed they haven't attempted to put one or two candidates forward for positions.
Posted by Scott Mills on Jul 12th, 2022
Don't think anyone wants that job of education minister. No one can touch the amazing performance done by mr wickenden in the past. Further more to the education, they too busy locking the kids in, than paying for pencils and other resources, and if there wasn't 3 teachers to a class there might be some kitty leftover.
Posted by Danny Moisan on Jul 12th, 2022
I voted for Reform on the basis that they would make a difference! it seems an awkward position to find themselves in but maybe as a block vote they can impact future votes. otherwise the election seems to have been a pointless exercise, more old boy, nodding dogs running errands for their rich puppet masters
To place a comment please login Login »