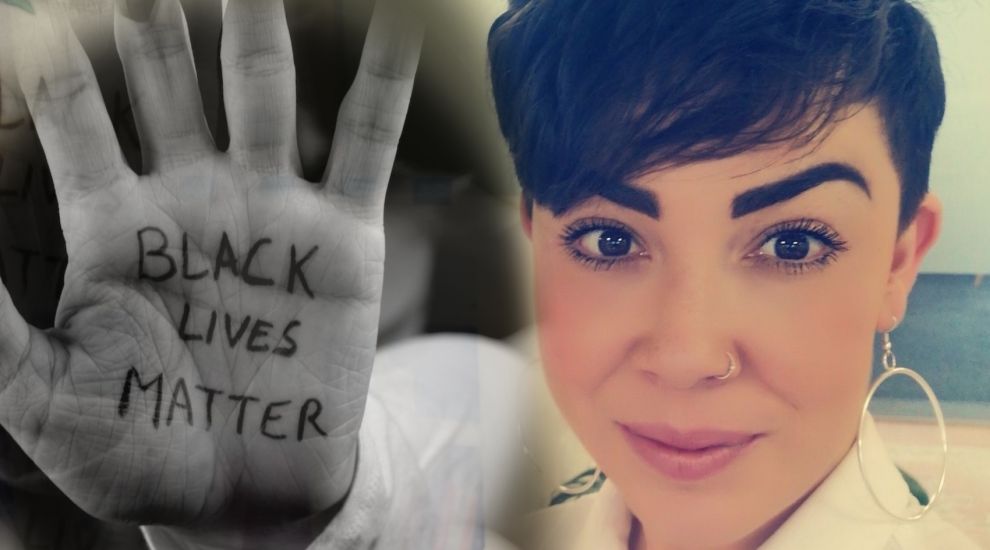 An islander has shared the complexities of being a light-skinned mixed-race woman in Jersey, as she explains the concept of 'white privilege'.

While the terminology may evoke feelings of defensiveness in some, local wellbeing specialist Jade Ecobichon-Gray explains why this shouldn't be the case, and can harm the battle against racism...

"White privilege is a term that some of you may never heard of, and for those of you that have, your whole body may have just got into defence mode upon reading it. I can understand that, but I also know that in order to understand racial injustice and racism in our society we cannot shy away from confronting the issue that sits at the very heart of the matter.

I have come to realise that there are two main reasons people get defensive when they hear the term. White people very rarely racialise themselves and when they hear themselves being spoken about in racial terms it seems to result in a sense of genuine uncomfortableness or offence.

For example, in 2019 Channel Four reporter Jon Snow stated. ‘I have never seen so many white people in one place,’ when reporting on a pro-Brexit demonstration. The remark led to 2,500 complaints to Ofcom.

Video: The comment that got Channel Four reporter Jon Snow in trouble. (OldQueenTV/YouTube)

The basis of the complaints? Being referred to as a white person. This is because whiteness is dominant in our society, it is the default identity and that carries a belief that a white worldview and lived experience is a universally accepted world view or lived experience.

The second reason people balk at the term is the word ‘privilege’.

People have an immediate assumption that they cannot hold white privilege because they too have experienced personal hardships within their lives. And I can understand why this position is taken by some individuals. The word privilege very often denotes the trappings of an upper middle-class lifestyle characterised by financial security and all the benefits it brings. However, what is being referred to there is socio-economic privilege, not white privilege.

In its most basic form, white privilege means that someone’s life and lived experience has not been made more difficult because of the colour of their skin. I recently heard Trevor Noah describe it in terms of a golf handicap as opposed to privilege and I think it’s a great analogy. Essentially, we live in a world where black people have never been given a handicap to enable fair play with white people - who have a whole host of advantages as a direct result of both historic and enduring racism and systems designed to protect their interests to the detriment of black people and other racial minorities.

Video: Trevor Noah explains white privilege by likening it to a golf handicap. (The Daily Show With Trevor Noah/YouTube)

As a light-skinned mixed-race woman I have been aware of the white-passing privilege I hold since a very young age.

It has presented itself in a myriad of overt and covert ways. My skin colour has been celebrated as a chance to disentangle myself from the complexities of race. It has often protected me from racial slurs. It has afforded me opportunities that I know would be withheld from others under the guise of them being the wrong ‘fit’ for an organisation. It has enabled me to challenge ignorance and racism in the same way countless black people have, whilst knowing that I will actually be heard and acknowledged and will not be viewed as confrontational and angry.

I am not six times more likely to be stopped, questioned or searched because of the colour of my skin. If I found myself in the criminal justice system, I am not nine times more likely to receive a prison sentence than my white counterparts. I am rarely told that I should be grateful to be where I am in life in a way that implies that I have been ‘allowed’ to progress. I am not subject to racist rhetoric such as ‘go back to where you came from’ when I express how I feel about my lived experience as a minority.

My white-passing privilege for the most part ‘allows’ me to express myself authentically and fully. I am not made to feel that I am ‘too sensitive’ when I have informed someone of a racist incident, I am not made to agree with the justifications provided as to why I must have misunderstood or taken what has happened out of context for fear of being seen as ‘difficult to work with’. Or perhaps most damaging of all, to be told that what I know to be true about the way racism continues to seep through every crack and crevice in our society, cannot be accurate because, ‘We don’t see colour here.'

You may now be wondering why not seeing colour is damaging.

You may have felt that expressing that sentiment is helpful in conversations about race and racism. Here’s why it is both damaging and unhelpful. It is, in itself, an act of white privilege.  An ability to opt out of uncomfortable conversations about racism by asserting that you are not a part of the system that upholds oppression because you don’t see the differences between people. But in that very moment of expressing that you don’t see it, you are simultaneously negating the existence of the very real racism and oppression enacted against Black people and withholding validation of their experiences by refusing to see them for who they are both racially and culturally.

As a society we don’t like to discuss white privilege, largely due to the fact that whiteness is never racialised and is always dominant. Any conversation that brings it into sharp focus is met with a desire to swiftly dismiss the topic and move on lest anyone feel uncomfortable. Our inability to discuss privilege also stems from the fact that racism is viewed as a moral issue, those who hold racist beliefs are bad and those who don’t are good. End of story. And yet the truth is much more complex. White privilege is not about good or bad, it exists regardless of morality. It is a product of socialisation, culture, implicit bias, unconscious superiority and an accepted societal viewpoint that white equates to ‘normal’, and everything else is ‘other’.

My white-passing privilege has been evident my whole life, largely because I live in a multi-racial family whereby it is easier to see it in action through comparison with my family members lived experiences. It is uncomfortable to accept that it has afforded me opportunities, protection and promotion in society, but perhaps most uncomfortable, that it is part of my identity as a mixed-race woman. And yet I do accept it. I have sat with my discomfort; I have owned my privilege and I have worked tirelessly to use it in order to speak up and fight against systems of oppression. I discuss it honestly in order to educate others to own it within themselves as the first step towards becoming actively anti-racist.

We can no longer afford to disengage or maintain a state of defensiveness around topics of race and racism.

If we want to become anti-racist it has to start by acknowledging white / white-passing privilege and continue by doing the work required to own it, unpack it and dismantle the systems that have maintained it for generations."