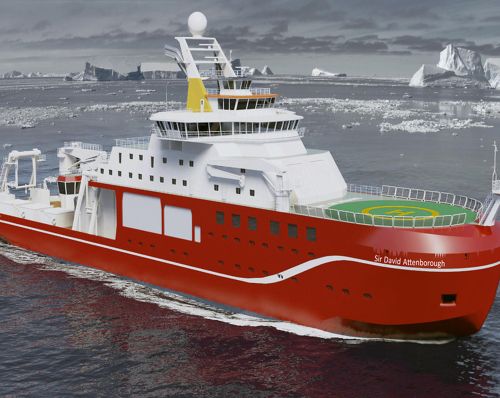 Boaty McBoatface will explore the polar seas as a yellow submarine, ministers have said.

But the new £200 million research ship from which the sub will be launched is to be named after Sir David Attenborough.

Science minister Jo Johnson said a public call for suggestions for the name of the vessel had "captured the imaginations", and the name Boaty would adorn a remote-control sub-sea vehicle instead.

But the research ship will be named RRS Sir David Attenborough.

The decision to name the new research vessel after the veteran broadcaster, who turns 90 on Sunday, came after the suggestion attracted 10,284 votes in the public vote.

Sir David said: " I am truly honoured by this naming decision and hope that everyone who suggested a name will feel just as inspired to follow the ship's progress as it explores our polar regions.

"I have been privileged to explore the world's deepest oceans alongside amazing teams of researchers, and with this new polar research ship they will be able to go further and discover more than ever before."

Mr Johnson said: " The public provided some truly inspirational and creative names, and while it was a difficult decision I'm delighted that our state-of-the-art polar research ship will be named after one of the nation's most cherished broadcasters and natural scientists.

"This vessel will carry the Attenborough name for decades to come, as it fulfils its mission to explore the oceans and put Britain at the forefront of efforts to preserve our precious marine environment.

"The ship has captured the imaginations of millions, which is why we're ensuring that the Boaty name lives on through the sub-sea vehicle that will support the research crew, and the polar science education programme that will bring their work to life."

Sir David had been selected because of his work presenting wildlife documentaries on the BBC including The Blue Planet, Planet Earth and Frozen Planet, the Department for Business, Innovation and Skills said.

The Government will also fund a new £1 million Polar Explorer Programme to encourage young people into science and engineering.

Boaty McBoatface will be sent to collect data and samples remotely from the deepest waters of the Arctic and Antarctic.

Users on social media reacted with a mix of dismay and acceptance at the decision.