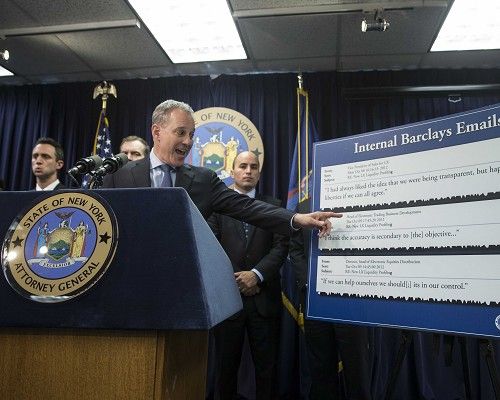 Barclays Bank is taking allegations "very seriously" that it misled large institutional investors and other clients in the United States by falsely telling them it was taking measures to protect them from predatory high-frequency traders, it said today.

The claims were made against the banking and financial services firm in a securities fraud lawsuit announced by New York's attorney general Eric Schneiderman.

A Barclays spokesman said: "We take these allegations very seriously. Barclays has been co-operating with the New York Attorney General and the SEC (Securites and Exchange Commission) and has been examining this matter internally. The integrity of the markets is a top priority of Barclays."

The complaint, filed in state Supreme Court, portrays "a flagrant pattern of fraud, deception and dishonesty with Barclays clients and the investing public," the attorney general said. The lawsuit alleges Barclays deceived investors about its dark pool, an electronic trading operation intended to shield them from the high-frequency traders who use sophisticated computer programmes to get early access to pending orders and other market-moving information.

The bank promoted a service it claimed was a "surveillance" system that would identify and hold accountable "toxic," ''predatory" and "aggressive" traders, the lawsuit says. Instead, the service "was essentially a sham," Mr Schneiderman said.

"Barclays has never prohibited any trader from participating in its dark pool, regardless of how predatory or aggressive its behaviour was determined to be."