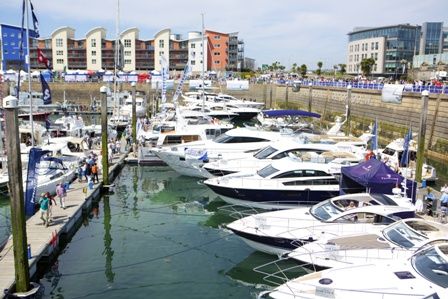 Holidays for Heroes Jersey provides holidays in the Island for past or present armed forces personnel who have been injured, during service. This local charity was founded by Dawn and Richard Woodhouse in 2008 and since then it has has arranged more than 1,200 holidays.

Chairman Dawn Woodhouse said: “It is a privilege and an honour to be chosen by Barclays as one of the benefiting charities at the Jersey Boat Show. Over the years we have had the pleasure of providing more than 150 holidays for Royal Navy and Royal Marines personnel and so to join with their own charity is rather special. As we look forward to another season of providing holidays for past or present injured members of the Armed Forces, the funds raised at the Barclays Jersey Boat Show will be an important contribution as we already have 370 holidays booked for 2014.”

The Royal Navy and Royal Marines Charity is the principal charity of the Royal Navy. It aims to improve the lives of all who serve – past and present – and their families and provides funds for naval and military charities that work with families and veterans, especially those experiencing difficulty with child support, ill-health, old age or hard times. Since the first Jersey Boat Show’s was held in 2008, the Royal Navy has had a regular presence through visiting Navy vessels and personnel including fisheries protection and security vessel HMS MERSEY and university vessels HMS SMITER and HMS BLAZER.

The Managing Director for Barclays Intermediaries, Paul Savery, said: “Jersey enjoys a close and longstanding relationship with the Royal Navy and Royal Marines and they have provided great support for the Barclays Jersey Boat Show over the previous four years we have been involved. I know that touring the visiting Royal Navy vessels is a “must-do” for visitors young and old. As such, it’s fantastic that we can do something in return through our support of The Royal Navy and Royal Marines Charity and Holidays for Heroes Jersey at this year’s show, both of which do such great work for our Forces personnel.”

The 2014 Barclays Jersey Boat Show will take place in and around St Helier Marina over the May Bank Holiday from Saturday 3 until Monday 5 May.