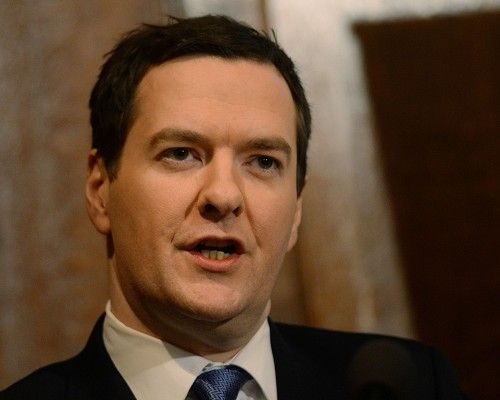 Gross domestic product (GDP) increased by 1.9% in 2013 and has now recovered the lion's share of output lost in the recession, according to the Office for National Statistics (ONS). The pace of recovery slowed slightly in the fourth quarter of last year to 0.7% but economists are predicting an annual improvement of up to 3% for 2014.

Labour and the unions say this has yet to feed through to pay packets, with wage growth lagging behind inflation, and that a recovery led by house prices and consumer debt could prove unsustainable.

GDP remains 1.3% below its pre-recession peak in the first quarter of 2008.

But ONS chief economic adviser Joe Grice said four-fifths of the decline in the economy during the downturn has now been recovered and that after four successive quarters of growth in 2013, it "does seem to be improving more consistently" now.

Mr Osborne said: "These numbers are a boost for the economic security of hard-working people. It is more evidence that our long-term economic plan is working.

"But the job is not done, and it is clear that the biggest risk now to the recovery would be abandoning the plan that's delivering jobs and a brighter economic future."

But shadow chancellor Ed Balls said: "For working people facing a cost-of-living crisis this is still no recovery at all.

"And with business investment still weak, construction output down and housing demand outstripping housing supply, this is not yet a recovery that is built to last."

TUC general secretary Frances O'Grady said: "Any return to growth is welcome, but this is the wrong kind of recovery and is two years late.

"The recovery is yet to reach whole swathes of the country or feed into people's pay packets. This must change if the benefits of recovery are to be felt by both businesses and workers."

The GDP figures come a year after it was feared that the economy was about to enter an unprecedented "triple-dip" recession and months after the Chancellor came under pressure from the International Monetary Fund (IMF) to rethink his austerity strategy.

But the IMF has since sharply upgraded UK forecasts and the ONS data shows a pace of growth for last year that has not been better since 2007 when it was 3.4%. In 2012, growth for the whole year was just 0.3%.

Today's figures were in line with market expectations but a strongly improving economic performance, together with falling unemployment and low inflation are seen as putting pressure on the Bank of England to cut interest rates.

However policy makers have indicated they are in no hurry to lift the cost of borrowing even if joblessness falls to the threshold of 7% which it has set for considering a rate hike.

The slowdown in quarterly growth to 0.7%, though expected, came as a disappointment to some in the City after the economy improved by 0.8% in each of the previous two periods. It rose by 0.5% in the first quarter.

The dominant services sector, which accounts for three quarters of UK economic output, grew by 0.8% in the last three months of 2013.

It made up 0.6% out of the overall 0.7% growth in the period. Within this, two thirds came from business services and finance. Manufacturing improved too but was still well off their pre-recession levels.

Construction shrunk by 0.3% over the quarter, which included a dire performance in November when it slumped by 4%.

For this year, the IMF forecasts growth of 2.4%, in line with the independent Office for Budget Responsibility. The Bank of England's most recent outlook was for growth of 2.8% in 2014.

But James Knightley, of ING Bank, said signs suggested an even better performance.

He said: "Employment continues to rise robustly, housing activity is very firm, confidence is on the rise, credit growth is improving and the UK's key export market - the eurozone - is showing some encouraging signs.

"Consequently, we believe that the economy can post GDP growth of 3% this year."

Howard Archer, of IHS Global Insight, said: "While GDP growth slowed modestly in the fourth quarter of 2013, expansion of 0.7% quarter on quarter still marked a very satisfactory end to a surprisingly good year for the UK economy."

He said the annual rate of expansion placed the UK among the strongest growing major economies last year.

John Longworth, director general of the British Chambers of Commerce, said: "These growth figures confirm what we've been hearing for some time.

"Businesses across Britain are growing ever more bullish about their prospects. Many companies are accelerating their pace for the first time in years."

Treasury Chief Secretary Danny Alexander acknowledged that productivity had been falling, but insisted this had contributed to the rise in employment.

The Liberal Democrat minister told BBC Radio 4's World At One: "It has been (falling), of course that's also helped to ensure that employment rises, that's a good thing for people in every part of this country.

"We are doing everything we can to change the British economy so that we get more long-term investment in infrastructure, in manufacturing. That is something that can't be done overnight."