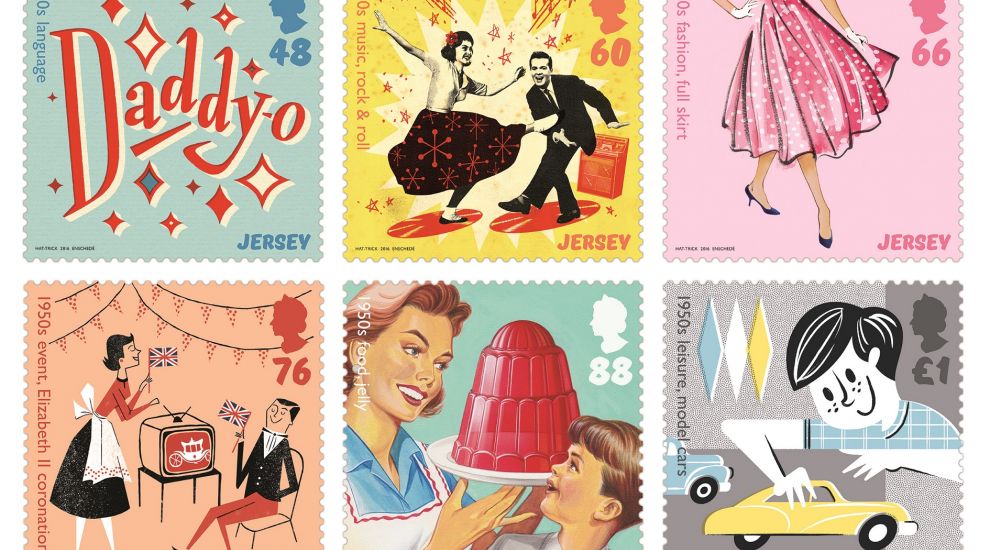 Popular culture of the 1950s is the subject of a set of six stamps, a Miniature Sheet and a Souvenir Sheetlet to be issued by Jersey Post on 5 July 2016.

The first in a five part series looking at popular culture through the decades, the issue explores different aspects of 1950s culture, namely language, music, fashion, events, food and leisure pursuits. The concepts and designs have been created by Hat-Trick Design (London) Ltd, working with specially commissioned illustrators.

Laura Bowman, Designer at Hat-trick explains: “We were asked by Jersey Post to create a series of six stamps celebrating all aspects of Popular Culture in the 1950s, from fashion to food. During our research it became obvious that the decade had a very distinct visual language and style. We decided it would be interesting to commission new imagery for each topic, drawing on the decade’s visual style, typography, patterns and colours as inspiration. Consequently we commissioned a different illustrator to create imagery for each stamp in an illustration style reminiscent of the period. For the 50s we were inspired by pastel shades often seen in the fashion and interior design of the time, as well as rock & roll posters, 50s cartoons and the hand painted advertising so prominent in that era.”

As with residents of mainland Britain, the people of Jersey have embraced the ever-changing influences of fashion, music, art and technology over the years, and the 1950s particularly allowed popular culture to blossom following the oppression of the German occupation and hardships endured during the immediate post-war years.

The Miniature Sheet which accompanies the set of stamps offers an artistic representation of one of Jersey’s main shopping streets in the 1950s. It has been designed by Brad Woodard of Austin, Texas, who also produced the illustration for the £1 stamp and uses a distinctive pastel colour palette, characteristic of the era.

A Souvenir Sheet, containing all six stamps has also been produced with the addition of a timeline, showing significant events of the 1950s including the year Princess Elizabeth became Queen, the year Mount Everest was conquered and the year of the Space Race.

The 1950s Popular Culture stamps will be available to buy from all branches of Jersey Post from 5 July 2016. Philatelic stamp products such as sets of stamps, Miniature Sheets, Souvenir Sheets, First Day Covers and Presentation Packs will be available from the Jersey post offices at Broad Street, St Helier and Rue Des Pres, St Saviour on issue day and can be ordered now at: www.jerseystamps.com or by phoning the Jersey Philatelic Bureau on: 00 44 (0)1534 516320.