The Government HQ that could have been… 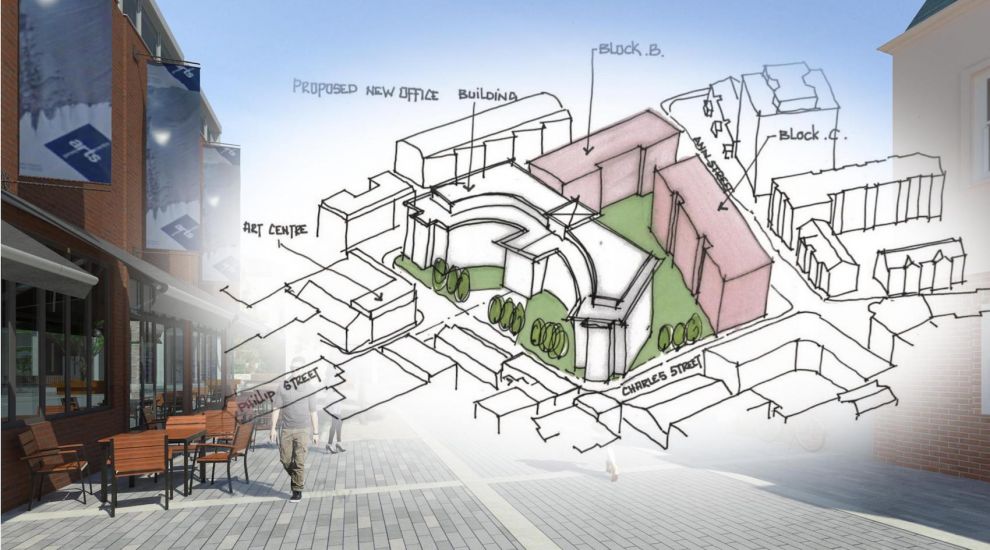 The Government HQ that could have been…

As the government restarts its search for a permanent headquarters, with the help of a consultancy firm costing £100k so far, images have emerged of the HQ that could have been.

However, these only remain a “temporary” solution, with the ambition still being to move to a new premises that can house all government workers within five years, when the Broad Street lease is up. 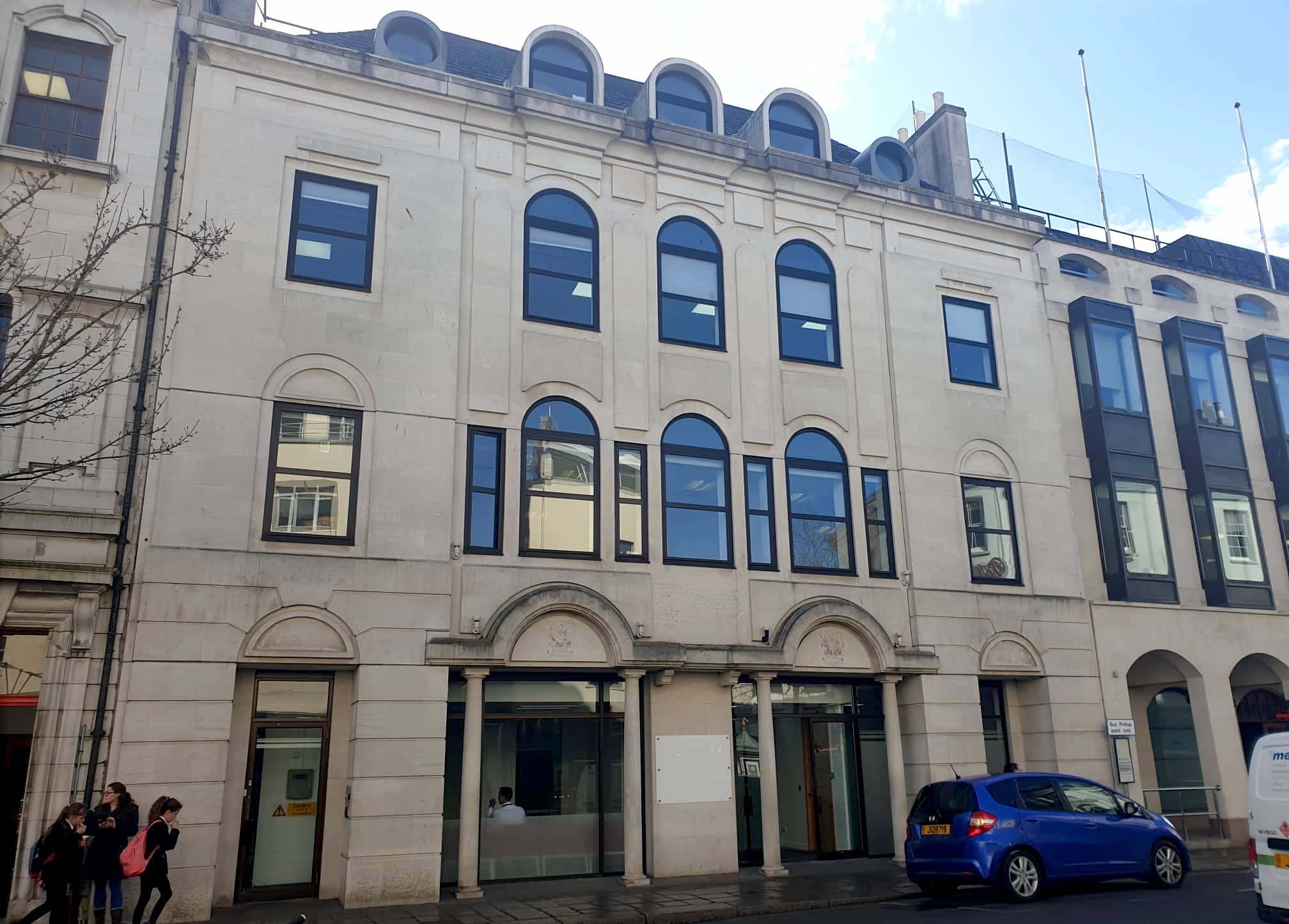 It emerged last year that Ann Court – a site by the Arts Centre earmarked for social housing – was among the frontrunners in considerations for a new premises.

But that move got voted down by States Members following a debate in January described as a clash of “hearts and minds”.

Work has now begun again in earnest on finding a site for a new headquarters, involving work alongside Plan RB consultants.

The Government of Jersey has a one-year contract with the firm – so far at a cost £103,725 including expenses– which will see them work to develop a “strategy and brief for rationalising the estate by delivery of a new hub building to house the Government of Jersey and determine and deliver required interim staff relocations”. 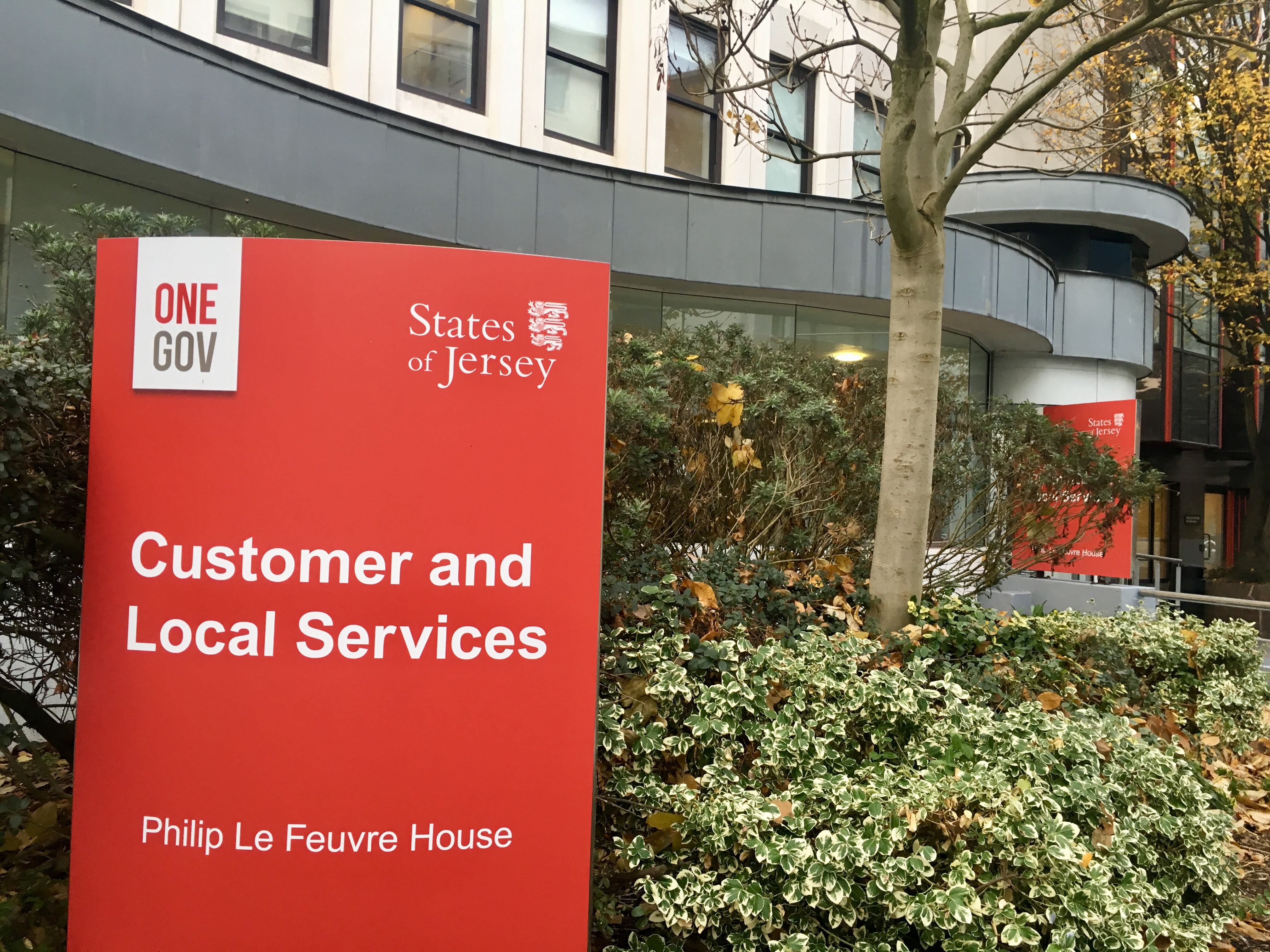 A spokesperson told Expressthat a group was also working on the plan, commenting: “The One Government Office Programme Board is working on the investment case and analysing options for delivering the project and as part of that option appraisal sites will be identified.  Once the investment case is approved, the selected delivery option will guide the final site option available for selection”.

As this work gets underway, Express has obtained initial sketches of the Ann Court proposals.

While the plans were dropped – hence no more detailed sketches than those produced internally being available – they do reveal a little more of the size, scale and aesthetic the government is looking to achieve.

The sketches show plans for three blocks surrounded by trees and centred around an open green courtyard. 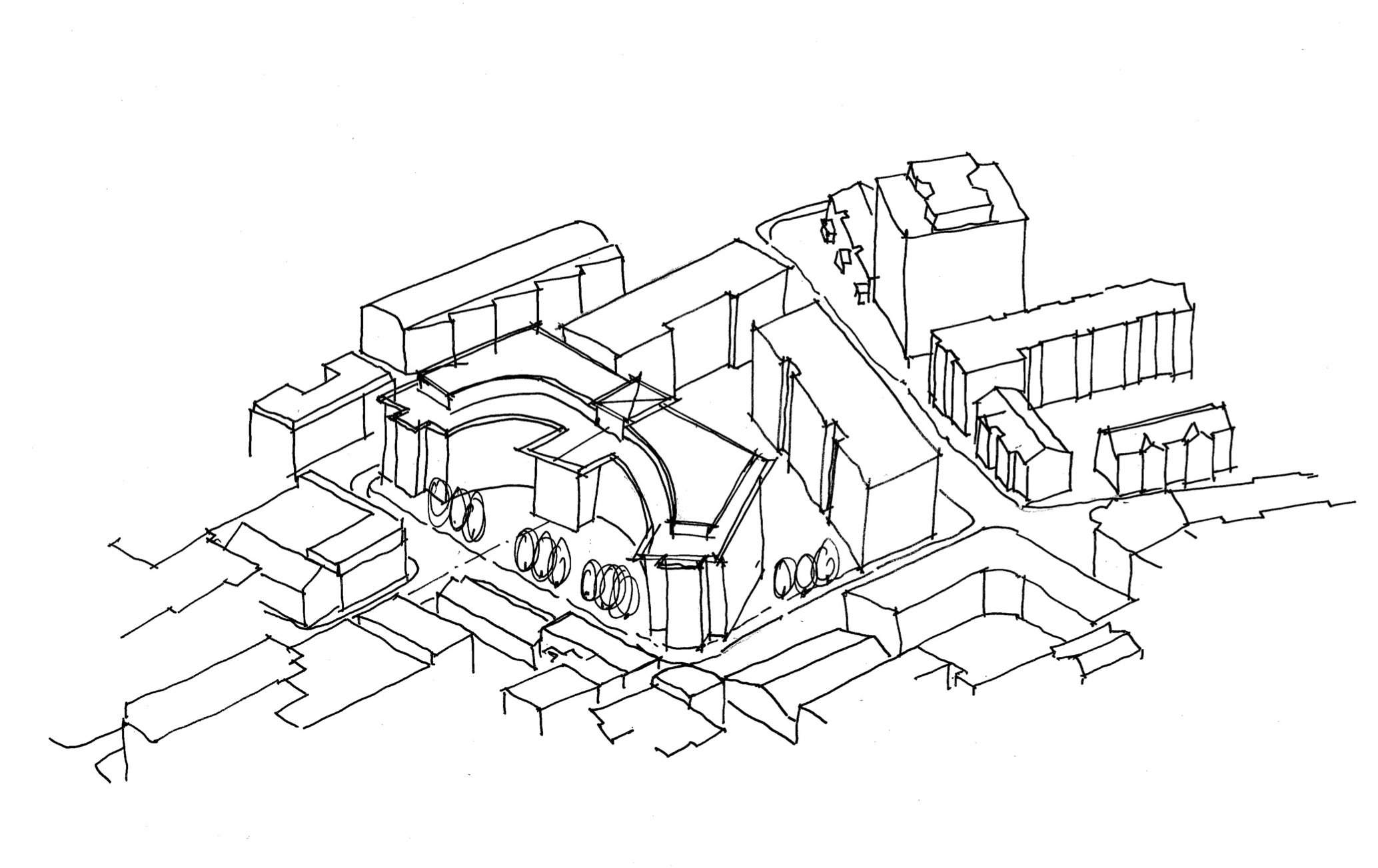 Pictured: An early sketch of the plans for a government HQ at Ann Court.

The largest of the buildings, which featured a curved façade with green space and trees in front of it, faces the Arts Centre, with the ‘front door’ aligned with Phillips Street.

There are also access points from the surrounding roads of Charles Street, Ann Place and Ann Street.

Meanwhile, Andium Homes, who are responsible for developing 165 units of affordable accommodation at Ann Court say that their construction work has been “progressing well” since the States Assembly voted to scrap the idea of placing a headquarters there in January.

“The new development will deliver 165 new homes comprising of 130 one-bedroom flats, and 35 two-bedroom flats. These are not for sale, on completion they will be allocated through the Affordable Housing Gateway for rental,” a spokesperson explained. 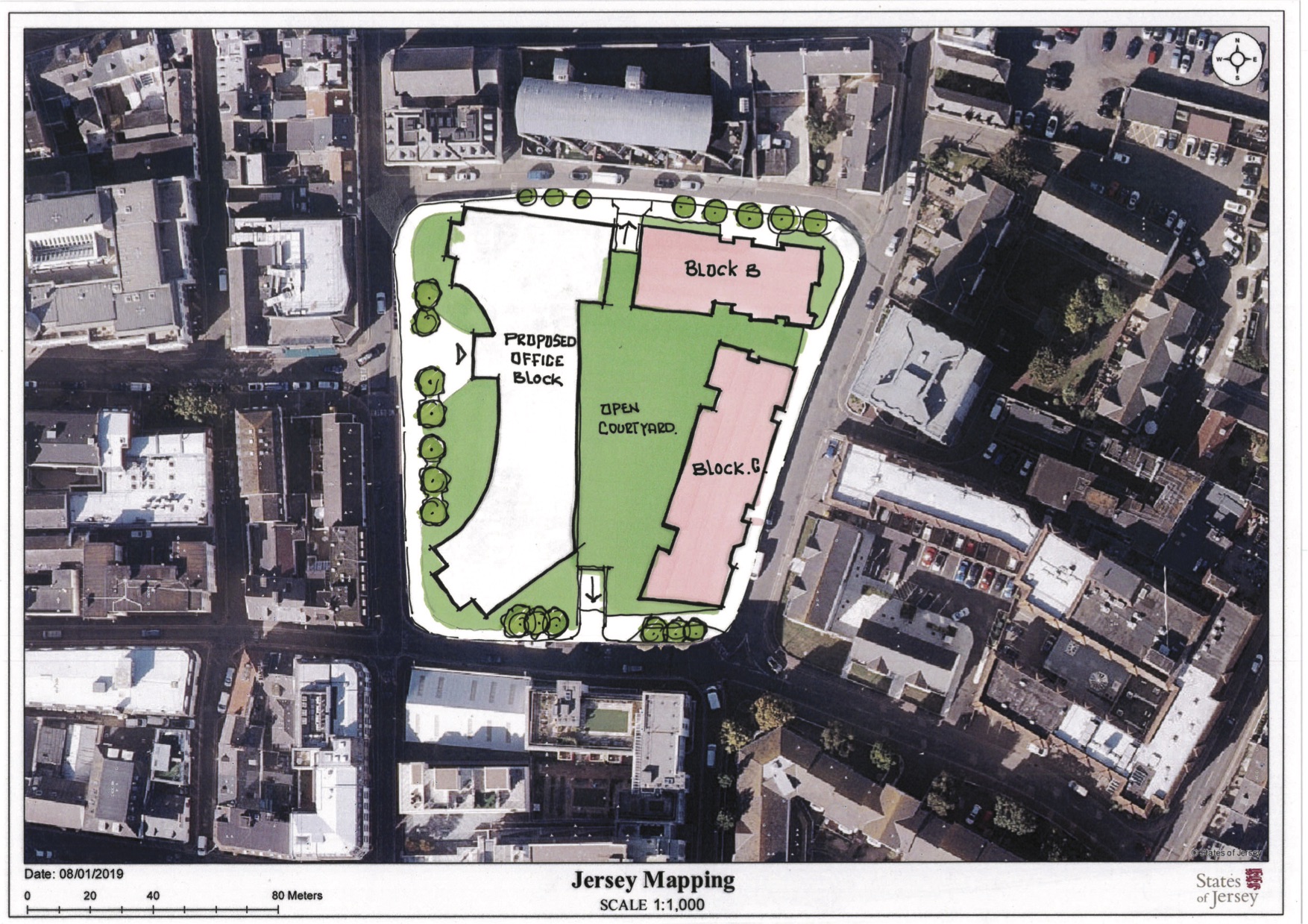 Pictured: Another sketch of the Ann Court government HQ plans, which have now been rejected.

They added that the blocks will be completed “in phases”, with the first home available in September 2021, and final homes being handed over in January 2022.

Posted by Nadia Lucas on Apr 3rd, 2019
It seems everything that the "Government of Jersey" does is now provided by outsourced UK companies, even our rental deposits for local properties goes to the UK....so why over populate our island, roads and housing by bringing in workers when we can have them work on our islands behalf remotely....our grandfathers will be turning in their graves if they could see our island now,
Posted by John Henwood on Apr 3rd, 2019
The Ann Court decision was an emotional one and too hasty, the States Assembly should have paused to consider the alternatives. For instance, if one looks at Cyril Le Marquand House and, in particular, Philip Le Feuvre House which occupies a huge site, in terms of their possibilities for residential accommodation, they alone would almost certainly have provided many, many more dwelling units than will be built on the Ann Court site. And centralising the public sector would have released many more opportunities for housing. The other side of the equation was important too, put all government departments in a single site and one would eliminate most of the duplication and triplication that presently occurs across multiple sites. The saving would be huge. Sadly, this was one of those occasions where hearts ruled heads and the outcome is not as beneficial as it might have been had there been pause for thought.
So, a hundred thousand has been spent - a lot of money, but it's not even a tiny fraction of what was wasted on planning a hospital and one hopes it will not be allowed to get out of hand as that did.
Posted by Alistair Le Ruez on Apr 3rd, 2019
Bailiwick Express seems to have a narrow minded style of reporting any aspect of our Government, its starting to devalue to the quality of the outlet as every day there is a story with negative grumblings over pretty much anything from the Government. Reducing everything to petty groans about money is an easy smoke screen to put up and garners conservative following very cheaply.
Culturally Jersey tends to find change painful, and this type of reporting plays on that insecurity for commercial gain.
£100k is a lot of money to many of us, it also a drop in the ocean to numerous residents who earn that every few months, just take a look at the cars driving around. There is not a single senior exec in Jersey's privileged main industry of finance that would consider turning up for less than £500k a year, and many of them employ consultants at £5k plus a DAY.
Please do us all a favour and put some balance into your reporting, you're devaluing your media channel. It's too easy to whip up weak support through this constant whining about change.
Do you suggest that our public services go back to the good old days 20 years ago when nothing worked properly? Please think balance.
To place a comment please login Login »

FOCUS: The top-level Gov shake-up that shook out the COO