Around 300 key workers from across health, education, retail and agriculture have tested positive for covid-19 antibodies - but more than half experienced no symptoms of the illness.

According to a new report on the government's Essential Worker Antibody Survey, 7,850 islanders were tested in total, but just 4% had evidence of having already had the virus.

Conducted between 21- 29 May and 1 – 7 June, the tests were offered to the essentially employed - among whom retail workers, nursery staff and cleaners - to collect further data about how the virus had spread amongst those who were working through lockdown.

They were invited to take a pin-prick serology test to show if they had at some point been infected with the virus. 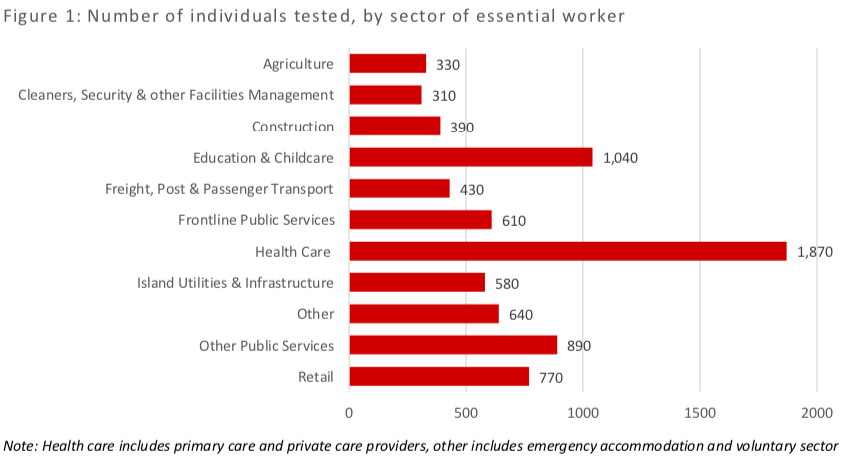 Pictured: The majority of workers who took part in the survey worked in health care or education and childcare.

The results of the survey have now been released with a warning that they do not offer a statistically representative sample and should not be used to provide a 'prevalence figure' for all essential workers or by sector.

The majority of the 7,850 islanders tested worked in healthcare, or education and childcare.

The survey showed that over half of the 300 individuals who tested positive for the presence of SARS-CoV-2 antibodies had experienced no symptoms, a trend already observed during the community antibody testing programme.

The latter led to estimations that around 4,500 islanders have been infected with covid-19, with three in five (62%) being asymptomatic.

Pictured: The survey showed no difference between age groups.

“The survey was designed to provide a snapshot of covid-19 infection across key groups which were considered to be at higher risk of exposure,” Dr Ivan Muscat, the Deputy Medical Officer of Health said.

“We have found that more than half of those with a positive result for the presence of antibodies reported no symptoms. This information is in keeping with recent estimates of asymptomatic infection in other jurisdictions."

Pictured: The majority of those tested reported no symptoms.

The Chief Minister, Senator John Le Fondré, described the survey as a "valuable process which provides useful data on how this virus is affecting the island".

"It’s encouraging that the results suggest no great difference with the Community Testing Sample that Statistics Jersey have run," he added. "I want to thank all those employees across sectors who took part in the tests and thank every essential worker for their dedication and resilience throughout the Stay at Home measures.”