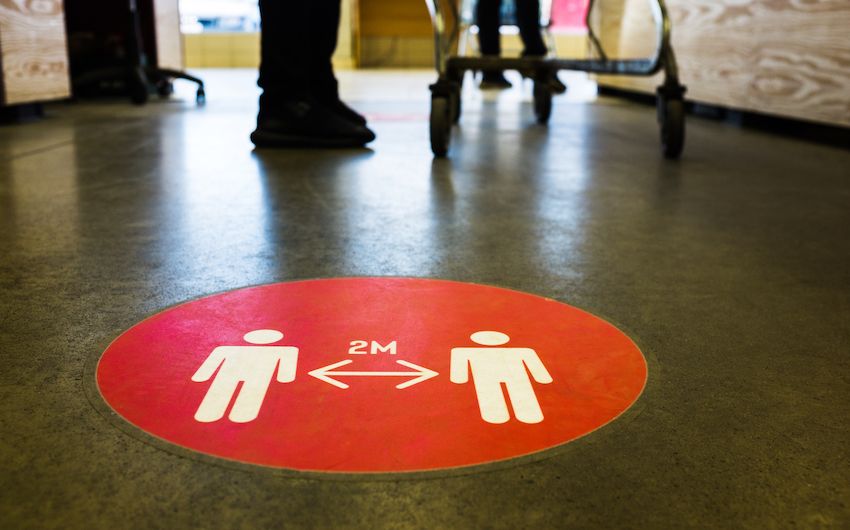 Islanders will be fined up to £1,000 if they “wilfully” refuse to obey police orders to physically distance, after States Members approved the new law yesterday.

The vote came after much discussion, with several claiming that the new rule wouldn't be fair on children and parents.

According to the Health Minister, Deputy Richard Renouf, the new regulations will replace the measures currently in place with a “less restrictive regime”, and remove the limit on time people can spend outside of their home.

Presenting the proposal to the Assembly, the Minister warned the island was “not out of the woods”.

“This virus still has potential to spread with the unnecessary movement of people,” he added.

He reminded people should be conscious with the movement they make outside their home.

Deputy Renouf said that while islanders could control their own risks inside their homes – by deciding who goes in – the Government can protect them outside their homes, something the regulations he proposed aimed to do.

.@DeputyTadier has asked for clarification on the rules of the proposed physical distancing from the Solicitor General. The SG has advised that 2 mtrs distance must be kept between people, and this distance is not limited to face to face but to the nearest point between 2 people.

There was confusion in the Assembly as to what the two-metre physical distance rule meant for islanders. The Solicitor General, Matthew Jowitt, advised that the two-metre distance was not limited to face-to-face but “to the nearest point between two people”.

Several States Members spoke in support of the legislation, including the Constables of St. Brelade and St. Ouen, Mike Jackson and Richard Buchanan.

Mr Jackson, who described the proposed law as “draconian but temporary”, explained his honorary officers were “tearing their hair out at people not respecting social distancing” as they had not tools to encourage enforcement of the rule.

Mr Buchanan said the proposals were a “very necessary piece of legislation” and would allow the island to move “through lockdown towards the exit” by giving officers the tools and toolbox to deal with offences.

Deputy Kirsten Morel said the proposition would take islanders “one step closer to freedom” and urged fellow members to trust islanders and the Health Minister, “who has shown us he can be trusted”.

Deputy of St Brelade, @johnyhil has stated he will vote for this proposal but has spoken of his concerns on the exemption of people's homes from the Safe Distancing guidelines. He added that he hopes the Minister will give further thought to this.

The Environment Minister, Deputy John Young, voiced concerns over what he described as “lockdown fatigue”, with many islanders already acting as if the pandemic was over, which he said was not sensible.

He warned that the proposals did not limit people's ability to gather at home, which could put the island at risk.

Concerns were also raised over the impact the proposals would have on children and young people, including by the Children’s Minister, Senator Sam Mézec.

The law states that adults would be expected to ensure the children they are with follow physical distancing. If they fail to take “reasonably practicable steps” to stop the child breaching safe distancing, following direction from a police officer, they will also be considered to have committed an offence.

I regret that I have come to this conclusion, but I will be voting against government proposals to introduce fines for not abiding by physical distancing (even though I support the principle) because the proposals have not given adequate consideration to children’s rights.

Deputy Louise Doublet said she understood the need for the legislation. However, she went on to say she wouldn’t support it as it would not be proportionate to be make children liable to an offence.

She said it was not practical to ask toddlers or children with special needs to follow physical distancing.

She also said the proposals should have included clear medical advice relating to children - which the former Acting Medical Officer Dr Ivan Muscat last week confirmed were not "super spreaders" of covid-19 - and why they need to physically distanced.

Deputy Doublet made a bid for the proposition to be referenced back to include that information, as well as a report on the impact of the proposal on children’s rights, but it was rejected with only 16 members supporting it.

Pictured: The Health Minister said that the island was not yet "out of the woods", despite the low number of covid-19 cases.

Concluding the debate, Deputy Renouf reminded his colleagues that keeping physical distance was "the most important [measure] wherever you are” and urged islanders not to mix with other households - a rule he said applied to everyone, whether they live in “a mansion or a bedsit”.

“We are not giving permission to throw parties,” he added.

He also assured that an offence would only be committed if islanders wilfully refused orders to stand two metres apart.

The proposition was eventually adopted with 33 votes 'pour' and 11 'contre'.

Posted by Janette Gabrielsson on May 29th, 2020
This could so easily lead to a police state. At the very least, the legislation should have had a termination date. If the police do not abide by the spirit of the legislation (ie an offence would only be committed if islanders wilfully refused orders to stand two metres apart), there will be a lot of negative repercussions and people will quite rightly wanting to know why they were fined when so many other people are openly flouting social distancing. I doubt there is anyone in the States or the island, who can hand on heart say that they haven’t done so.
To place a comment please login Login »