Law change coming to protect cats on the roads 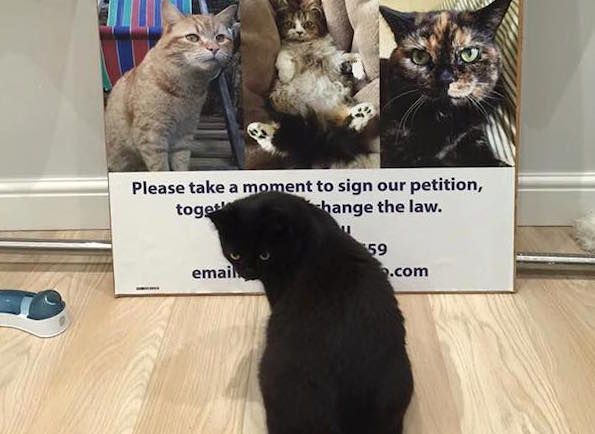 Law change coming to protect cats on the roads

The 4,000 cat-loving petitioners look likely to get their way - cats are going to get more protection under Jersey law, but ministers can't quite decide which law they want to change.

A meeting between ministers and campaigners has ended with ministers agreeing that there should be a legal requirement for anyone who runs over a cat to call the Animals' Shelter - but there's a question over whether they need to change the Road Traffic Law or the law governing prevention of cruelty to animals.

In Jersey, as in the UK, you have to stop and report an accident involving a dog to the police, but you don’t have to tell them if you’ve hit a cat.

Since this issue came to light a month ago after the case of a woman seen beating a cat to death after hitting it with a car, more than 4,000 people have signed an online petition set up by cat lover Sandra Jasmins from St Lawrence. She is pressing the States to give cats the same status as dogs and make it illegal to hit a cat and just drive off.

Fellow cat lover Deputy Peter McLinton has brought her cause to the States this week and got the support of other politicians including St John Deputy Andrew Lewis who told the House his family had lost three cats on the Island's roads in recent years.

The Deputy - former 103FM DJ "Peter Mac" - said that ministers had agreed a way forward, and that proposals were going forward to the States lawyers' who are in charge of amendments to legislation.

"What I am suggesting is that there is a tweak in the law that doesn't criminalise a person for hitting a cat with a car as it is more often than not out of the driver's control anyway," he said.

"Rather, let's make it an offence not to 'make a call' to report the incident.

"I don't necessarily believe the call has to be made to the police, rather I think we would be far better served if there was a legal requirement to call the JSPCA as they are in a far better position to make a positive response that actually may be able to help the cat. There could be some law drafting issues here but I am sure they are not insurmountable."

Yesterday, the Deputy had said that he thought a change in the law would be forthcoming, and that if he thought ministers were 'dragging their feet' he would take a backbencher proposition to the States to force the issue.

Posted by Trevor Carre on Nov 4th, 2015
Change whichever law that dogs are protected under.... simples!
To place a comment please login Login »