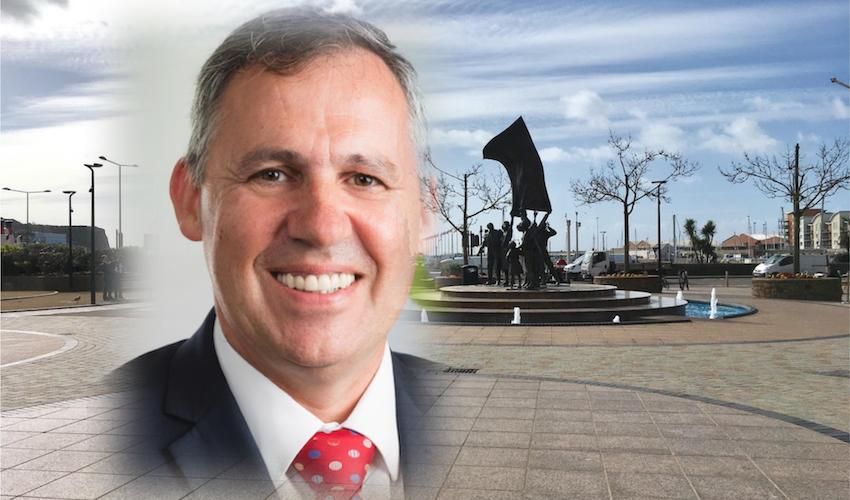 With three-quarters of a century since the end of the Occupation just around the corner, £3million plans to mark the milestone anniversary have divided political, public and business opinion.

Costing up to £3million and proposing an expanded public amenity space in the heart of town - the plans haven't been well-received by all.

Despite enthusiasm from the Infrastructure Department about the town revamp proposing the combination of Liberation Square and the Weighbridge – the plans have received backlash from the business community concerned about the consequences getting rid of the Esplanade Link road will have.

For Express columnist Andy Jehan, Chair of the Jersey Chamber of Commerce’s Transport and Tourism Committee, these concerns are worth listening to as he calls for States Members to hit the brakes on what has been described as a "vanity project"…

“We already have a Liberation Square, that at times hasn’t been very well looked after. But at a time when we need money for a Hospital, and other necessary infrastructure, it’s suggested that we spend £3m, yes, £3million not the £1.4m as originally suggested or the £2m. The Treasury Minister confirmed in the States last week that it is now £3m that was required for this vanity project.

Pictured: Treasury Minister Susie Pinel confirmed that the States of Jersey Development Company "are working on the assumption of costs up to £3million" for the project.

Let’s celebrate Liberation 75 as we did the 50th, 60th and 70th, sadly at each of these events there are less of those who experienced the Occupation, but we have plenty of space available for those that want to remember. When we have an event that needs us to, we can close the road as required, leaving it open for the 360+ days a year that need it open.

In a week when the Fiscal Policy group have been advising Government to spend less and save more, the silence from States Members on this is deafening. Any business given the same advice would have an urgent review of what was in the pipeline. Projects that are urgent would continue, projects that are important may have to be put on hold. Projects that are just “nice to have” would be immediately stopped and the monies saved.

We learned many things from those who experienced life here in the Occupation - islanders who had to make do and mend - but the most important lesson has been about utilising whatever resource you have and not to waste anything. What do these people think about another £3m project extending something we already have, that is going to cost people and business time and money daily?

Pictured: Jersey's business lobby, the Chamber of Commerce, has hit back at the 'lack of consultation' with the business community on this project.

Strangely, listening to the Minister on local radio he now seems reluctant to support these plans? The Minister in the same interview confirmed he was responsible for traffic and road safety. In recent years the department have consulted widely every time they have considered introducing change - even when it comes to the positioning of zebra crossings.

For some reason, whilst this project would see a well-used road closed permanently, the same level of consultation hasn’t been carried out.

Are the transport experts really recommending that double-decker buses should become a regular sight in Conway Street, Library Place and Mulcaster Street, adding significantly to the existing congestion, increasing the risk to pedestrians and not to mention the impact on the environment.

If further evidence is required, add the additional daily cost of the congestion to businesses and individuals. It’s not just the higher taxi fares we have heard about, but the additional waiting time in the traffic estimated to be six or seven minutes a day. If you need to do business in the area daily then you have an extra half an hour a week of unproductive time. 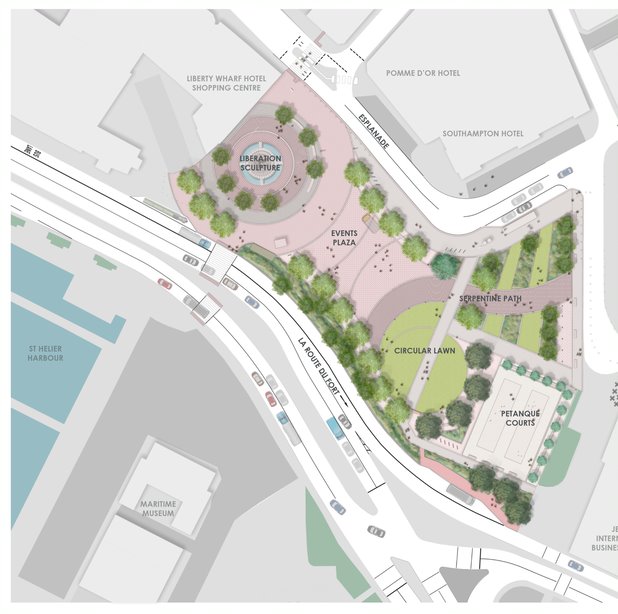 Pictured: The proposals for the Liberation 75 revamp were put out for consultation last week.

Recently, Peoples’ Park was ruled out as a potential site for a Hospital. The park is already capable of holding major events and if some investment is needed to improve this facility to enable additional events then surely this would be a much cheaper option.

So my call is to our States Members - be they on the Council of Ministers, or back benchers.

Let’s stop this folly before it starts. Start to demonstrate that you are actually listening to the professional advice you are paying for. Let’s take the advice of the Fiscal Policy group seriously and not spend £3m on this project."

The opinions expressed in this piece are those of the author, and not of Bailiwick Express.

Posted by Dave Lelievre on Mar 26th, 2019
It seems the States of Jersey have lots of money to throw away.
Posted by The old git Git on Mar 26th, 2019
How come the cost for this stupid idea has gone up by an extra £1,600,000.00 in such a short time. Where do these people get their quotes from.
Posted by Toby Le Rhone on Mar 27th, 2019
Extend the road that runs along the bottom of the Royal Yacht and past the museum (adjoining the Ordinance Yard and Chemin du Bel) to in front of the bars and restaurants at Caledonia Place (Ce Soir, Trobadour, Unawatuna). Convert it from an access road to ordinary one-way traffic and hey, we have a big square ideal for functions as well as maintained access for buses, deliveries and other vehicles etc. I hope they plant the square with a nice sheltering wall and big trees like a proper park - would be a great focal point for our island.
To place a comment please login Login »