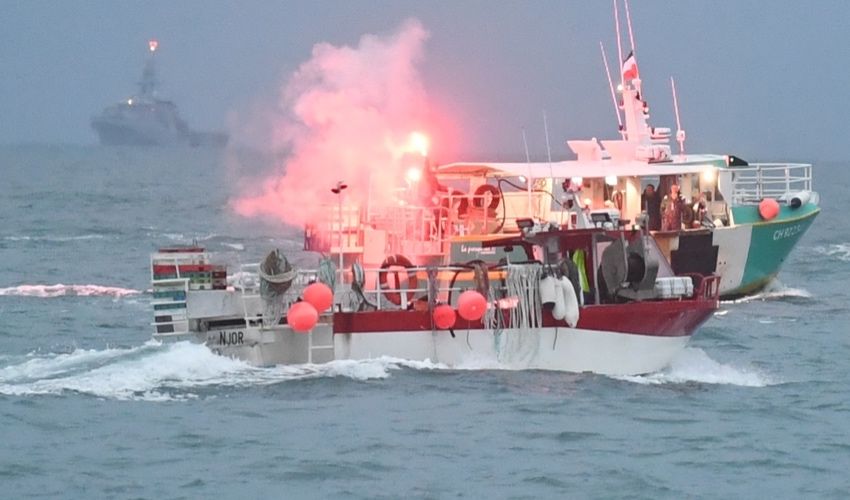 Jersey hopes it will take a major step forward next week in resolving its frosty but thawing relationship with France when it issues licences to French fishermen, which includes conditions on what they can catch.

From 1 February, fishermen from Normandy and Brittany who are permitted to operate in Jersey’s territorial waters will have conditions attached to their licences, set by the island.

It was the application of these conditions in April 2021 which prompted a fleet of around 70 French boats to protest outside the Harbour while two Royal Navy warships kept an assiduous watch.

The tense blockade attracted worldwide media attention and was regarded as one of the earliest, and certainly most visual, flashpoints caused by the UK’s exit from the EU.

A trade deal agreed by the UK and EU in December 2020 had defined a criterion for French boats wanting to fish around Jersey – waters that had previously been jointly managed – but a paucity of data and strict rules about diplomatic lines of communication led to a high-profile breakdown in relations.

France said it would take legal action and even threatened to cut its electricity supply to Jersey.

In response to the fishing protest, Jersey split its licencing process into two parts – firstly defining which French boats qualified for a licence and, secondly, applying conditions to those licences to monitor and control fishing activity.

That second part – which had caused so much consternation in 2021 – will be applied from Wednesday.

Pictured: External Relations Minister Philip Ozouf has been seeking to smooth the waters before conditions are applied to fishing licences.

However, it is understood that Jersey is optimistic that the application of conditions will be broadly accepted by French fishers, after months of dialogue between the island, EU, Paris and industry representatives in Normandy and Brittany.

This time, Jersey says there have been clearer lines of communication.

Whereas previously, the island was told not to engage directly with French fishing representatives, this time, ministers and officials have been allowed to talk to representatives of those who will be directly affected by the conditions.

External Relations Minister Philip Ozouf is one of those who has been busy preparing the ground, along with Jersey officials in Brussels, London, Caen and locally.

The flow of data from France relating to past fishing activity, on which the trade agreement stated that the conditions should be based on, has also improved and while information has only arrived via the EU recently, it has given Jersey something far more tangible to work on than the barren information landscape of 2021.

The 1 February deadline was set in September, but it is understood that Jersey will still take a pragmatic and sensitive approach when it comes to applying the conditions.

Jersey has devised a formula which recreates a permit scheme that was in existence during the qualification period defined in the trade agreement, which is based on ‘fishing effort’ in local waters between February 2017 and January 2020.

This means that French fishers should, in theory, be familiar with the new conditions as they will essentially replicate what, when and where they fished, under a scheme that was previously overseen by their own authorities, under the now-defunct Bay of Granville Agreement.

These permits covered the whole range of metiers, from whelk and lobster potting to netting spider crabs and dredging for scallops.

It is understood that the formula has been broadly accepted by the EU and French, not least because it follows the letter of the trade agreement.

It will define and limit fishing effort – capping, for example, the number of days a licensee can fish in Jersey’s waters and/or the amount of stock that can be caught.

Importantly, it means that French fishers can do no more than they were doing previously. It also means that, for the first time in many years, Jersey has full control of its territorial waters, with the number of French boats allowed to fish in the island’s 800 square miles of sea limited to the 136 vessels which have been issued with a licence.

The issue of replacement vessels has been a bone of contention, with Jersey fishermen fearful that their French counterparts, supported by EU subsidies, will be allowed to upgrade boats to larger vessels capable of depleting stocks.

Jersey’s government, however, argues that the total tonnage and engine power of the French fleet is capped, therefore, overall, it cannot increase. They further argue that each boat’s effort is defined by its permit.

Therefore, the size and power of the boat is irrelevant, it is the permit that counts.

This Wednesday 25 January at 10am, the Environment, Housing and Infrastructure Scrutiny Panel will hold a Public Hearing with the Jersey Fishermen's Association on proposed amendments to the Sea Fisheries Law and Regulations.

From next Wednesday, permits – with conditions attached – will begin to arrive in the mailboxes of French fishers.

Jersey will be hoping that their response will be very different to what it was two years ago.