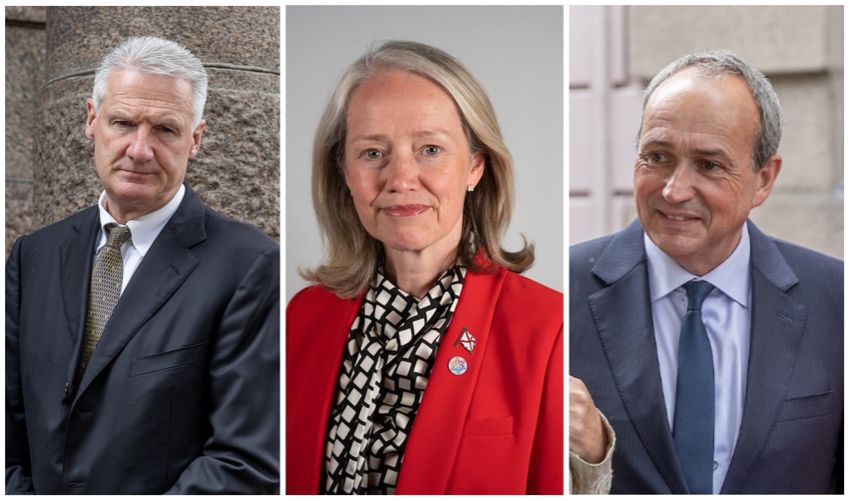 The former head of the £805m Our Hospital Project says any decision to call it off must be made by the full States Assembly...not by one Minister, who he has described as "uninformed and inexperienced."

Deputy Lyndon Farnham was speaking after it was announced by Infrastructure Minister, Deputy Tom Binet, that the previous hospital plan was now no longer financially viable.

Deputy Binet is leading a review into the hospital project and will announce his findings before 20 October.

However, yesterday, he said that he would definitely not be recommending that the project continues unchanged because it was no longer affordable in light of the global economic crisis, which had pushed Jersey’s inflation rate close to double digits, and the UK rate even higher.

Deputy Farnham - who says he may bring his own proposition to keep the project on track for 2026 - has now formally written to the Chief Minister, Senator Kristina Moore, saying: “Could you please confirm the status of the hospital project?

“Comments made by Deputy Binet do not align with a government media release issued earlier today.

“Neither Deputy Binet or the Council of Ministers, have the authority to override States decisions without first coming back to the Assembly.” 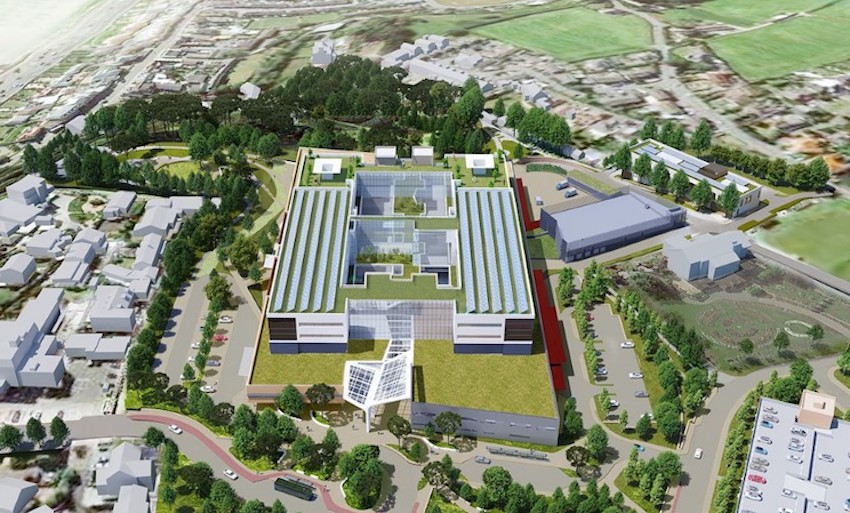 Pictured: The Overdale plans for a 'health campus' are set to cost up to £804.5m, and were approved in mid-May.

Speaking to Express this morning, Deputy Farnham added: “Deputy Binet appears to have announced the results of the review before they have finished it.

“If the review found ways to save money while keeping the project on schedule, I would be right behind it.

“But to simply announce that it is unviable without a proper process shows how uniformed and inexperienced Deputy Binet is as a minister, because these decisions first need to go to the States Assembly.

“It has to be the Assembly which determines the future of this project.”

He added: “I had hoped we would see an impartial approach to this.

“I had hoped that Deputies Moore and Binet – who have been the biggest critics of the project - would allow themselves to be properly advised and gather all the information, but it appears that they are following a political agenda without due consideration of the facts.

“The bottom line is that we will spend a lot more money on a smaller hospital, possibly in different locations. And if we don’t have a hospital by 2026, we will have to spend significant amounts of money to modernise the existing estate, which is falling apart at the seams.

“I will fight as hard as I can, and I might even bring a proposition myself if they don’t act quickly enough.

“This is really important; we are playing with people’s lives if we delay the hospital any further.” 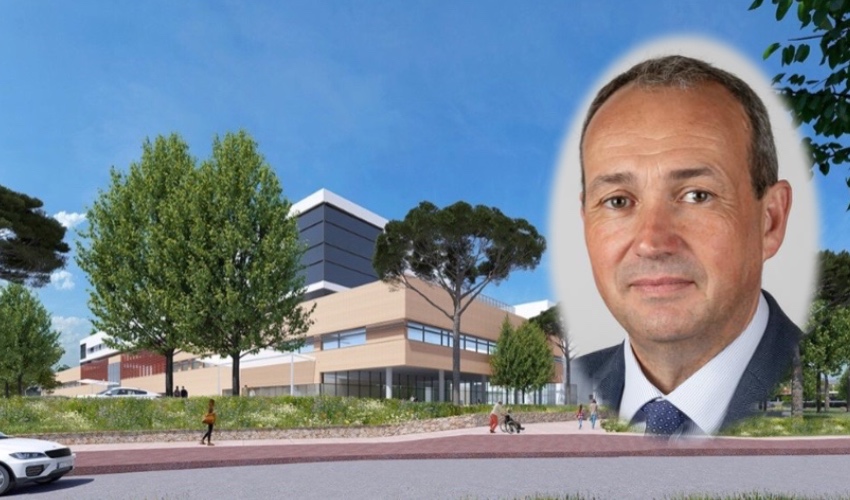 Pictured: Deputy Farnham has said he may bring his own proposition to try and keep the Overdale project on track for 2026.

But Deputy Binet denied that he had already made up his mind and was not following due process.

“We are not throwing away the plans on a whim; there has been a complete and utter change in background circumstances, and we have to respond to them. If the money isn’t there, and the funding mechanism isn’t there, then you can’t build it.

“You might want to buy a brand-new Ferrari but if you’ve got no money in your bank, you can’t do it. You can perhaps borrow the money and get yourself into trouble.

“Deputy Farnham isn’t to blame for that; and nor is anybody else.”

He added: “Deputy Farnham is entitled to hold whatever view he likes of my objectivity or lack of it. I can assure him that any interest I had in this before wasn’t necessarily critical of the end-product – although, I think it wasn’t ideal.

“I was certainly critical of the process and the way it was run, and I remain critical of that, and will do going forward. Others did too, and I think it worth bearing in mind that the last election had something to say about that, too.

“Hopefully, the election gave us a mandate to do something sensible, and I can assure Deputy Farnham and everybody else, I have not come to this review with any preconceived ideas.

“As far as I am concerned, I have been charged with running a process; I intend to run that process openly and honestly, and if there is bad news to give to people, I will give that bad news, and if that costs me, that’s too bad.

“There won’t be any obfuscation from me. People may not like what they hear and they might not like me for telling them, but that is by-the-by.”

“People may also take note of the fact that we haven’t employed the services of a large external consultant at great cost. It has been the view of the Council of Ministers that the majority of the information we need already exists, has been paid for and is held by local people.

“We did want some external expertise for independent verification of the process, which is helpful and gives people confidence, but it is not going to cost hundreds of thousands of pounds.”

Asked what an accessible cost for the new hospital would be, Deputy Binet replied: “That is a very fair question, and it is a discussion taking place at the moment.

“We need to have a conversation about what the island has an appetite for, and our ability to repay.”

Posted by Robert Gabriel on Sep 2nd, 2022
The people of Jersey elect politicians to make decisions on our behalf. However, due to the exorbitant costs involved, and the controversial location, the decision to build the hospital should have been the subject of an islandwide referendum. That was denied to everyone living here and with it the opportunity to voice their opinion on whether it was right to lumber future generations with the huge costs that this project will incur. If there is a change of policy now, I for one, will back it!
Posted by Martin on Sep 2nd, 2022
Farnham MAY consider Mr Binet as uninformed & Inexperienced but so was EISENHOWER when he successfully commended the D Day Invasion!.

Fanham may be experienced but that is CERTAINLY NO recipe for competency ( especially after WASTING £50 million of OUR money ) & I am 100% with Mr Binet whio IS a proven business man! !
Posted by Andrew Le Quesne on Sep 2nd, 2022
Thank you Deputy Binet for finally putting this fiasco in focus. If Deputy Farnham and his POG are so well informed and experienced how did they manage to waste £50m of public money?
When the Ralph Tubbs wing was opened, the NHS consultants had, I believe, given the States a template for the future development of the hospital, the politicians of the day ignored it.
The sense of urgency and risk are a direct result of long term neglect and underfunding by many long serving politicians. This is a 'false crisis' created by our politicians past and present, and they certainly have not acted 'democratically' or in the public interest.
Posted by Jean Lelliott on Sep 4th, 2022
People save lives, not buildings.
Some of the best healthcare in the world is given in old buildings.

Thank goodness for Tom Binet.
Posted by Tom Hirundo on Sep 4th, 2022
The risk is that Jersey is a jurisdiction that can’t do things, so instead we talk about doing things. The talk has become the end point, rather than delivery. This has to change.
Posted by Private Individual on Sep 4th, 2022
Deputy Farnham's suggestion that this decision should not be made by one person is flawed due to the fact that it was just one minister John Young who passed the planning application instead of it being passed by the planning committee.

You can't have your cake and eat it, Mr. Farnham. It was not the present politicians that spent over £100 million and have nothing to show for it. It was Mr. Franham and the gang of dim wits that just got kicked out of the states that were solely responsible for it.

I think you will find that Deputy Binet and the Chief Minister have the full support of the public over this issue which is why they were successfully elected to the government to sort out the mess the previous council of ministers made of the hospital saga.

Everyone who voted for Mr. Binet and Kristina Moore knew their thoughts on the location of the hospital and the amount of money it was going to cost the taxpayer to build it. They acted on what the public had told them they wanted from the new government which was to save money and that the hospital was going to be built in the wrong place.

They have now addressed both these issues, so well done, and keep up the good work.
To place a comment please login Login »