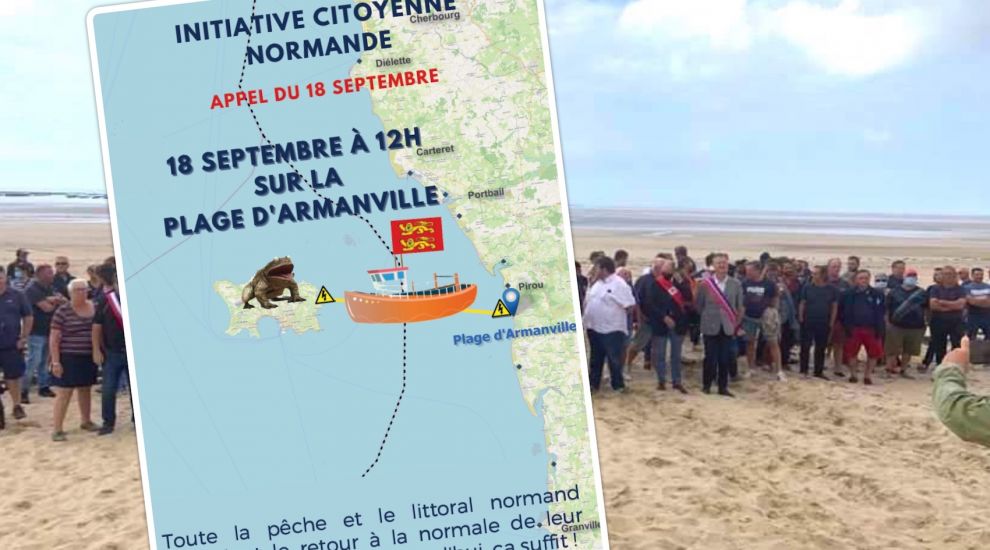 French fishermen protested on Saturday on the beach where a cable that provides electricity to Jersey runs out to sea as tensions with the island flared again... but what next after the 'power' play?

Around 100 fishermen and politicians from the neighbouring La Manche Département gathered on Armanville beach in Pirou, which is directly east of Jersey, less than a fortnight before the latest amnesty – which allows French boats to fish in Jersey’s waters under the pre-Brexit arrangement – runs out on 30 September.

The location was chosen to remind people of comments made in May by French Minister of the Sea, Annick Girardin, who threatened to cut the island's power supply if Jersey did not issue more licences to French boats.

Video: A French TV report about the protest. (France Info)

Politicians on the beach included Béatrice Gosselin, who represents La Manche in the French Senate.

Speaking through a megaphone to the crowd, Dimitri Rogoff, president of the Normandy Regional Fisheries Committee, was reported as saying: "It's an international affair that is beyond us. They [Jersey] are our closest neighbours. We can't stop talking to them!”

The mayor of Pirou, Noëlle Leforestier, added: “We have friendly, family ties. People from Jersey come to study Norman law and fishermen come to us to unload their fish.”

She added that, coincidentally, a Norman market was coming to Jersey this week, organised by Maison de la Normandie and La Manche.

“We have been good and patient"

The regional committee, which organised the protest, say their frustrations lie in the fact that "the situation with Jersey has not changed for more than two months." They claimed that, just 15 days before the deadline, Jersey had accepted just 70 licence applications out of 169 made.

“The guys are fed up with it. There is a feeling of weariness, of disappointment.”

President of France’s National Committee on Fisheries and Aquaculture Gérard Romiti told the FT that fishermen “feel they have been played in these discussions — they have gathered so much information and answered all the questions the authorities have asked, over a period of months and months", adding: “And yet still we cannot see any progress in these technical talks, with the temporary authorisations due to end at the end of this month."

Despite accusing the Jersey authorities of “nitpicking” over the detail of past fishing activity that they have requested before issuing licences, which Jersey argues simply follows the terms of the UK-EU trade deal struck in December, some French fishermen appear to realise that it may not be Jersey’s fault that the information has not reached the island.

“We are sounding the alarm with local elected officials to go to meet the Jersey Government directly because we no longer trust the European Commission,” Saint Malo fishing representative Pascal Le Cler told Ouest-France.

“We have been good and patient, but it cannot continue.”

Mr de la Haye added: “We are doing everything to speed up the transmission of documents. Things have been stuck in administration dead ends and bickering egos.

“We hope that Jersey will show more goodwill and no longer this nitpicking attitude. We want to work on the basis of 11 days of justified fishing in Jersey waters over the past three years and not, as Jersey has done, of asking for all the activity of each boat.

“That is another subject which, in my opinion, will not be settled by 30 September... Fishermen are pawns in a game that is played around Northern Ireland, the issue of migrants and financial services, but for us these are jobs and our businesses; it’s time to stop.”

"We are waiting for retaliatory measures"

Other fishers, however, are fed up to the extent that they are calling for more drastic action against the island.

Romain Davodet, who will be joining the protest after his less-than-12-metre vessel reportedly failed to obtain a licence, told Tendance Ouest that he thought the reason "Jersey constantly asks us for additional evidence so that we can recover our fishing rights” was part of a ploy to “eliminate as many [French] boats as possible” from the island’s waters.

He commented: "We are waiting for retaliatory measures against Jersey, since it [the island’s Government] is harming French economic interests. We also fish for businesses, markets and restaurants in the region, so it affects a lot of people.” 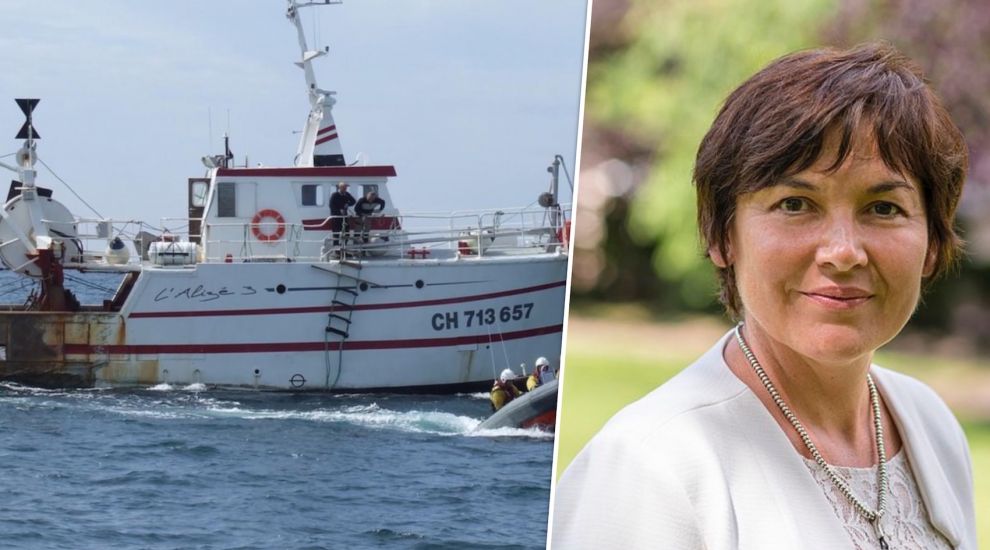 Pictured: The location of today's protest appears to be a reminder of an earlier threat by French Minister of the Sea, Annick Girardin, to cut off electricity to Jersey.

If France does look at the retaliatory route, it may be that the answer lies in economic, rather than electrical punishment.

On Saturday, regional deputy Bertrand Sorre said that the European Commission should make banking agreements with Jersey conditional on the maintenance of fishing conditions prior to Brexit.

Other fishers at the weekend protest spoke of blocking Jersey boats from trading in Granville or even sending back Jersey students studying at the University of Caen, France Bleu reported.

The amnesty extension to 30 September was granted by Jersey at the end of June, in an effort to calm a stormy dispute over the ability of French boats to fish in Jersey’s territorial waters.

The source of the upset

The origin of the tension was the UK decision to leave the EU and its signing of a trade deal with Brussels, which replaced the Bay of Granville Agreement, which had defined Jersey-France fishing relations since 2004.

Its climax, at least so far, was early May, when a fleet of French boats sailed to Jersey to protest at the way Jersey had issued licences.

The fishermen argued that they had been given no notice and the licence requirements went beyond the terms of the agreement.

Jersey, on the other hand, argues that it is following the letter of the trade deal and is following the proper diplomatic channels in asking for the required data of past fishing activity.

Politicians in Jersey suspect – and it appears the French fishermen may also agree – that any blockages in the passing of information and reluctance for the two neighbours to hammer out a deal may be due to a wider political game being played between recent divorcees, the UK and France.

The issue is not only complex at an international level.

How to move forward?

Some argue in Jersey that a return to the more local focus of the Bay of Granville Agreement, with its working and scientific committees, is the way forward – with Jersey, Normandy and Brittany, overseen by the UK and France, meeting to iron out any difficulties with Jersey’s licensing.

Islanders such as oyster farmer Chris Le Masurier believe that maintaining access to European markets is key and Jersey should allocate more licences in exchange for concessions from the French, including the opening of a border post in Granville, allowing Jersey boats to land directly in France, and ensure Jersey’s waters are reclassified to the highest level of cleanliness.

This will ensure that Jersey can profit from the current rise in demand and prices for shellfish in Europe, they argue, and mean that the Island’s main crab and lobster exporter, Aquamar, can land produce in France with the minimum of fuss. 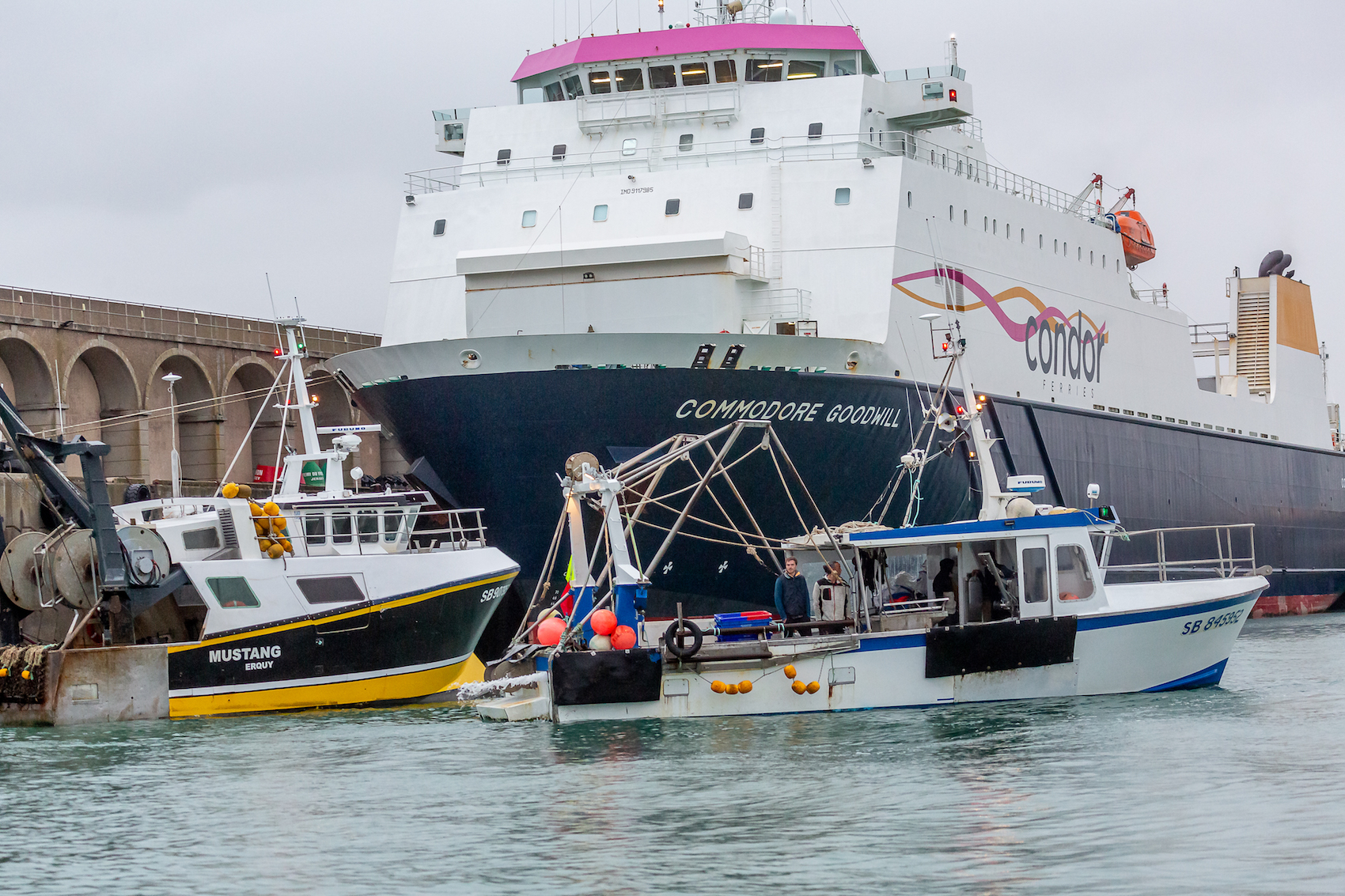 Pictured: The Commodore Goodwill was briefly stopped from leaving port during the protest.

Although acknowledging the politics at play in Paris, London and Brussels, they argue that Jersey cannot afford to come across as disrespectful or confrontational as the European market is key.

Focusing on creating a self-sufficient local market is not the answer, they say, as each islander would have to eat three crabs a day, 365 days a year to consume the local market’s annual catch.

Others, such as Don Thompson of the Jersey Fishermen’s Association (JFA), argue that Jersey needs to be firm and stick to the clear terms of the trade agreement. France wants to keep all the 300-plus licences that were issued under the Bay of Granville Agreement, because that is what French politicians promised when then trade agreement was being negotiated, they say.

The JFA also argues that Jersey – with most of its boats under 12 metres – cannot compete against the 50-odd French boats of similar size, which are backed by EU grants and subsidies, so it is imperative that Jersey only issues to boats that can provide the data, through their logbooks, to prove past activity.

The island needs to be firm with the French and EU, they maintain, noting that local jobs will only be protected and fish stocks preserved for future generations by taking a strong stance.

Environment Minister Deputy John Young – who grants the licences – is confident that the dispute will be settled, but is hoping that another amnesty extension won't be necessary.

He must surely hope that all sides, including London and Paris, despite their wider tensions, also want a speedy resolution.

A spokesperson for the UK Government Department responsible for Fisheries, DEFRA, told the FT that they were aware of Saturday’s protest.

They added: “Jersey and Guernsey have also shown flexibility by allowing continued access for EU vessels whilst evidence is gathered and licensing decisions are taken. We are continuing to engage with the EU Commission and French government and we expect to be able to communicate decisions on further licenses in the near future."

Posted by Colin West on Sep 20th, 2021
I think this should read, "The Jersey Fishing Industry have been good and patient and we wish to thank the Jersey Government for extending the time frame needed to supply our documentation" !!

Anyway the Jsy Government won't have a problems soon as there won't be a Jersey Industry to worry about !!
Posted by Jo Collins on Sep 20th, 2021
Jersey should just revert back to the previous agreement and let the English government sort this out. After all it was their unilateral decision on Brexit that was the cause of all this.
Posted by Davey West on Sep 20th, 2021
How is possible that Minister John Young lets the French fish without licences and the Jersey fleet would be ruthlessly fined. The truth is as any person interested in island waters knows that the fish stocks are depleted. Jersey fishers catches are closely monitored it must be others catching under size species and wrecking the breeding grounds. John Young needs to be tough says Don Thompson lets hope so otherwise there will be nothing left like French owned fishing desolate grounds.
Posted by Roy Dean on Sep 21st, 2021
Brexit happened
But everyone thinks we should go back to how it was before
Any complaint should be to the EU not Jersey
The Jersey EEZ is a Jersey responsibility and will be for the future
Notice no French are complaining about Jersey fishermen fishing in the French EEZ
To place a comment please login Login »