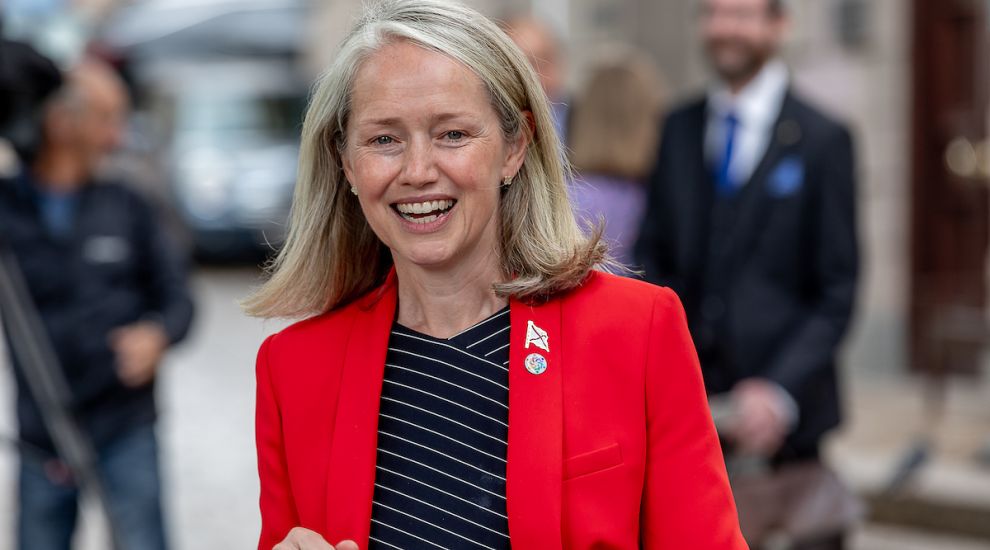 Deputy Kristina Moore is currently in pole-position to become the island's first female Chief Minister... but what will be her priorities if she is to succeed?

The key issues she says she wants to see tackled in this period include housing prices, number of people waiting for outpatient appointments, increase in need for mental health services, and the rising cost of fuel.

According to Deputy Moore, “we do not have time to waste”, and the “new government must start right away” with 100 days of action.

In her self-professed “ambitious agenda”, Deputy Moore proposes 18 main points that she would tackle in the first instance if she were to be elected as Chief Minister:

“A Government is more than just 100 days, it is for four years…”

Deputy Moore also proposes that the next Council of Ministers must agree a Government Programme within the first 100 days to set out the key priorities of the government and how to tackle them.

Deputy Moore’s Vision Statement continues by outlining her plans for key areas of interest, including the cost-of-living crisis, support for businesses, and an aspiration to return Jersey to its place in the top 20 of the OECD’s Better Life Index.

In addressing the cost-of-living crisis, Deputy Moore acknowledges that many costs are increasing due to external factors.

However, she suggests that a long-term solution could be to introduce more competition in food and fuel markets and proposes that the Minister for Treasury & Exchequer put forward a set of proposals to explore how to deliver targeted support for islanders.

Economically, Deputy Moore pledges to support Jersey’s entrepreneurs suggested that the government must adopt a “more proactive and supportive approach” to provide incentives for business to grow and thrive.

An example of this that she proposes in her Vision Statement is to use States-owned properties to provide low-cost units for start-ups.

In education, Deputy Moore presents a strong belief in investing in the early years. She outlines plans to include childcare as part as a package for key workers, as well as possibility of extending the school day to allow more time for physical activity, arts, music and one to one extra tuition.

Additionally, Deputy Moore voices her support for Reform Jersey’s proposals for free school meals. She also promises to invest in young people’s mental health services, and to complete the process of responding to the findings of the Independent Jersey Care Inquiry.

In her Vision Statement, Deputy Moore says there must be "more affordable houses built across the island”.

In order to achieve this, she suggests converting unused office space into housing, allowing the partial redevelopment of derelict glasshouse sites, and the redevelopment of the old Les Quennevais school site for affordable housing.

In addition, she wants to increase the island-wide rate for large properties that enjoy the luxury of space and release undeveloped or empty States-owned sites for redevelopment.

Deputy Moore also outlines plans to impose strict limits on the number of houses that can be built over 3000 sq ft for a limited period of time. Alongside this, she plans reintroduce the loan deposit scheme to help young people enter the property market and provide stamp duty breaks for first time buyers and last time buyers.

In the rental market, Deputy Moore proposes that there should be higher rates for buy-to-let property purchases, as well as a ‘rent to buy’ scheme for those returning to the island. She also outlines plans for the introduction of a landlord registration scheme alongside tax allowances against the cost of rent if it is over 30% of a household’s income.

Deputy Moore pledges to “protect our natural heritage and move toward a zero waste, circular economy” in continuing the drive to reduce carbon emissions in line with the government’s Carbon Neutral Strategy.

She suggests that she will prioritise securing investment in renewable energy as a power source, as well as setting up a grant to get homes insulated which will also reduce energy bills.

Deputy Moore outlines plans to phase out vehicles that burn fossil fuel through legislation and wants to replace the government cars with electric vehicles, or where practical, use car sharing schemes and bicycles instead.

Deputy Moore praises the frontline healthcare workers for their “valiant efforts over the last four years” and proposes that an independent inspection should be commissioned to “rigorously assess our system to drive standards in our health care service”.

In the Vision Statement, she also outlines plans to invest in more mental health services, as well as delivering an assessment of the most appropriate course of action on the Hospital build by the end of October.

Deputy Moore expresses a desire to support and enhance the role of Scrutiny. In her Vision Statement, she pledges to meet with the President of Scrutiny every month and hold a quarterly meeting with Scrutiny Chairs if she is elected as Chief Minister.

Under Deputy Moore, there would be more parish meetings with the Council of Ministers as well as the Connetable and parish officials.

She also wants to establish a Public Service Ombudsperson, as well as a Cabinet Office designed to support the Council of Ministers. The Assistant Chief Minister would have responsibility for this department, which would not require hiring any additional civil servants.

Deputy Moore also plans to ask the Chair of the Comite de Connetables to be an ex-officio member of the Council of Ministers. She suggests that all Ministers keep an open-door policy for States members, ensuring that the government is “united”.

“I believe in the huge potential of Jersey…”

Concluding her statement, Deputy Moore says: “I believe in the huge potential of Jersey, our better days are ahead of us, but we must take on some of the big challenges facing our island."

On the type of Government she would lead, she says: “I want to lead a government that is open, transparent, inclusive, accountable and most importantly, will get things done.

"In four years’ time, I want you and the voters to be able to recognise that the States has made a real difference in improving people's lives and setting us on a path of renewal and growth.”

Who are Kristina Moore's supporters?

Eight States Members are yet to declare their voting intentions:

You can read Kristina Moore's 'Vision Statement' in full HERE.

Posted by Jon Jon on Jul 5th, 2022
You obviously can’t judge her yet,even as favourite to win ,but somehow I don’t think she will solve the high cost of living,more competition regarding fuel,not sure how? Food maybe cheaper outlets opening up including clothes ,there are certain French shops that could enter the Island.Higher rates if you have a large house with space? The rates are high enough,not all people that own them can maintain them as it is.
Let’s see what happens and who gets her top jobs before the arguments start amongst them.
Posted by Aston Francis on Jul 5th, 2022
Excellent choice. Kristina has demonstrated that she is not afraid to ask tough questions or to challenge status quo.
Posted by Keith Marsh on Jul 5th, 2022
Sounds so rosy, shame all these wonderful ideas are not costed.
Everything has to be paid for.
To place a comment please login Login »