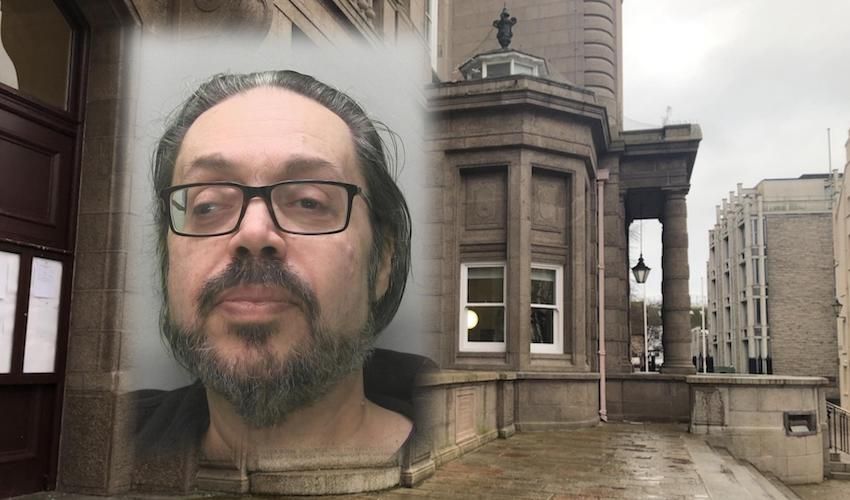 A 60-year-old fraudster has been sentenced to six years behind bars for the “plunder” of his dead business partner’s estate, and company accounts, to the tune of almost £750,000 in order to live “the high life” with his wife.

Russell Stephen King (60), who had to be extradited back to Jersey to face justice, appeared in Court in a wheelchair this afternoon to be sentenced for five counts of fraud.

The Royal Court heard that King and his former business partner, Duncan Hickman, set up a group of investment companies called Belgravia in 2004 which provided financial services. Although King “never held office” in the companies, “he exercised considerable managerial and directorial control.”

Explaining the set-up of the companies which were administered under an umbrella company called Belgravia Financial Services Group (BSFG), Crown Advocate Matthew Jowitt – appearing for the prosecution – added that “it was this entity’s bank accounts that King went on to plunder after Mr Hickman’s death.”

Pictured: Russell King is taken to an unmarked Police car in a wheelchair.

Belgravia began to suffer financial difficulties by 2008. Crown Advocate Jowitt explained that, at this stage, the company “was struggling to pay staff wages, and the regulated part of the business lacked sufficient cash liquidity for the requirements of the Jersey Financial Services Commission.”

The Crown Advocate added that the group had “exhausted a £1million overdraft facility with a local bank which had begun to demand repayment.”

In spite of these difficulties, however, it “did not prevent the Defendant, at the business’s expense, from living the high life.”

Elaborating on the ways in which King would indulge himself and his wife using money from the ailing business, Crown Advocate Jowitt recounted observations from King’s former personal assistant. She recalled King “and his wife… flying first class, making numerous such trips to Bahrain where they stayed at the Ritz Carlton”, or making frequent use of Belgravia’s private helicopter to make trips to London where they would stay at the Dorchester - expenses which Belgravia paid for.

She recalled the company would also foot the bill to fly King’s parents over from Spain and pay for their accommodation and meals at Longueville Manor during their stay. She described King as leading a "very extravagant lifestyle”, adding that her former boss had a “taste for high performance and luxury motor cars.”

Pictured: Russell King shielded his face when leaving Court having learned of his six-year prison sentence.

In May 2008, Belgravia was in dire straits financially, prompting the JFSC to forbid any sale of the business unless they received 48 hours’ notice. On this day, King’s former business partner Mr Hickman, “having been admitted to the hospital the day before with a suspected blood clot”, died.

During a three-month period after Mr Hickman’s death, King fraudulently took £671,213 from the Belgravia group for “his and his wife’s personal use” including the funding of a family trust structure set up in Switzerland.

Within this same period of time, King also sold “cherished car registration plates” which belonged to his late business partner for a sum of £84,000 almost half of which he then used to pay off his own Mercedes SLR and a further £27,979.72 he pocketed.

The Court heard that shortly after the (JFSC) announced that it was conducting an investigation into Belgravia in September 2008, the fraudster left Jersey and “was not seen in the island again until he was extradited from Bahrain in July last year.”

This extradition, Express revealed late last year, cost taxpayers around £18,000 as the fraudster was brought back to the island on a first-class flight due to King’s need to lie flat during the journey – a result of his health issues.

Moving for a prison sentence of five-and-a-half years, Crown Advocate Jowitt characterised King as having “exploited the death of his business partner, and exploited his power over those subordinate to him, to enrich himself dishonestly to the tune of almost three quarters of a million pounds.”

Making its recommendations to the Court for sentencing, the Crown accepted responsibility for 18 months’ worth of delay, attributing the rest of the decade wait to issues with the bureaucratic processes of the Foreign and Commonwealth Office as well as King himself having drawn out the process by leaving the British Isles for Bahrain.

Pictured: King arriving at Court on a previous occasion after being extradited back to Jersey from Bahrain.

Referencing a background report from the Probation Service, the Crown Advocate said that King “exhibits no genuine remorse for his offending but instead seeks to minimise his conduct.” The Crown took King’s guilty pleas into account but argued that the fact he suffers with “severe osteoarthritis in both hips” is not “exceptional” and therefore should not warrant a lower sentence.

In contrast, King’s lawyer Advocate Adam Harrison made much of the delay and of his client’s health issues to argue that the prosecution’s recommendation for sentencing was “too high” and that an “additional amount of credit should be given” for these factors.

Explaining that, in prison, King’s condition renders him somewhat immobile, meaning he “cannot partake in general activities” and he’s “unable to socialise with other inmates” and ultimately “confined to a cell and to his bed”, the Defence Advocate urged the Court to consider his client’s health struggles when passing sentence.

The case was heard by Jurats Averty, Ramsden, Blampied, Thomas and Pitman who, forming the 'Superior Number' - a panel who only assemble to hear the most serious cases - decided to sentence the fraudster to six months more than was moved for by the Crown.

Handing down the six-year sentence, Royal Court Commissioner Julian Clyde-Smith, presiding, informed the Court that the full reasons for the sentence would be detailed in a judgment to follow at a later date, but he characterised King's crimes as "very serious offences motivated entirely by greed" and that they were "gratuitous in nature."

King was also disqualified from being a Director of any company for a period of ten years before being taken back into custody by an unmarked Police car.