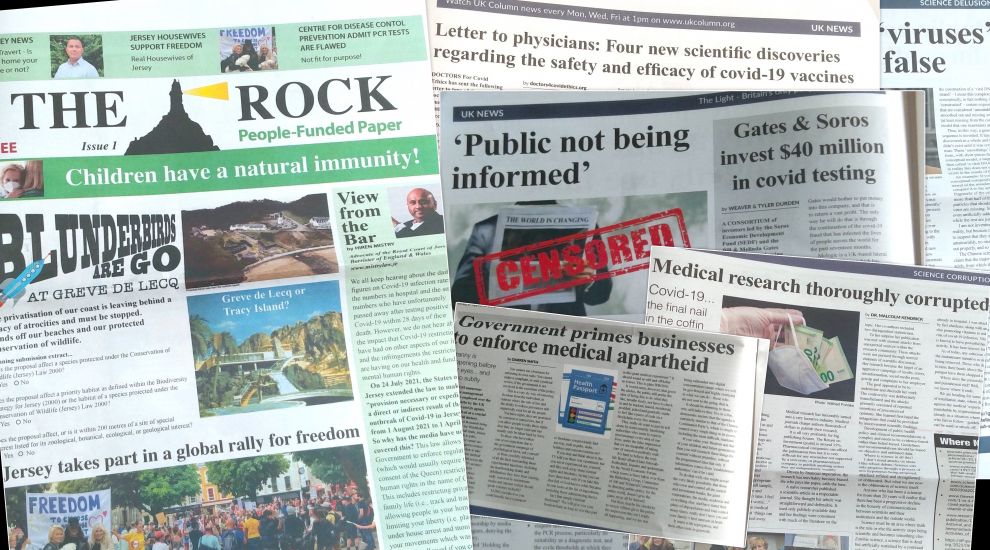 Jersey Post has pulled newspapers containing covid-sceptical articles and headlines such as ‘the Nazification of the NHS’ from circulation, and the Government is investigating, after a spate of complaints were received from islanders.

‘The Rock’ – a “people-funded” local adaptation of the UK’s controversial ‘The Light’ – was delivered to homes across St. Brelade, St. Clement, Grouville, St. Peter, St. Mary and St. John yesterday.

Its front page carried an column from local lawyer Advocate Hiren Mistry and an article about the recent ‘Rally for Freedom’, with a photo of ‘Real Housewives of Jersey’ stars Hedi Green, Kate Taylor and Margaret Thompson captioned: “JERSEY HOUSEWIVES SUPPORT FREEDOM.”

Inside, articles questioned the pandemic, covid vaccines and tests, with one entitled, ‘Medical research thoroughly corrupted’.

Another, by Dr Vernon Coleman, who Wikipedia describes as an "English conspiracy theorist, anti-vaccination activist [and] AIDS denialist", suggested that “the disease known as covid-19 was never anything more than a means to an end; a training programme” and that “the plan is for mandatory vaccinations for all” – something Jersey’s Government has never advocated. 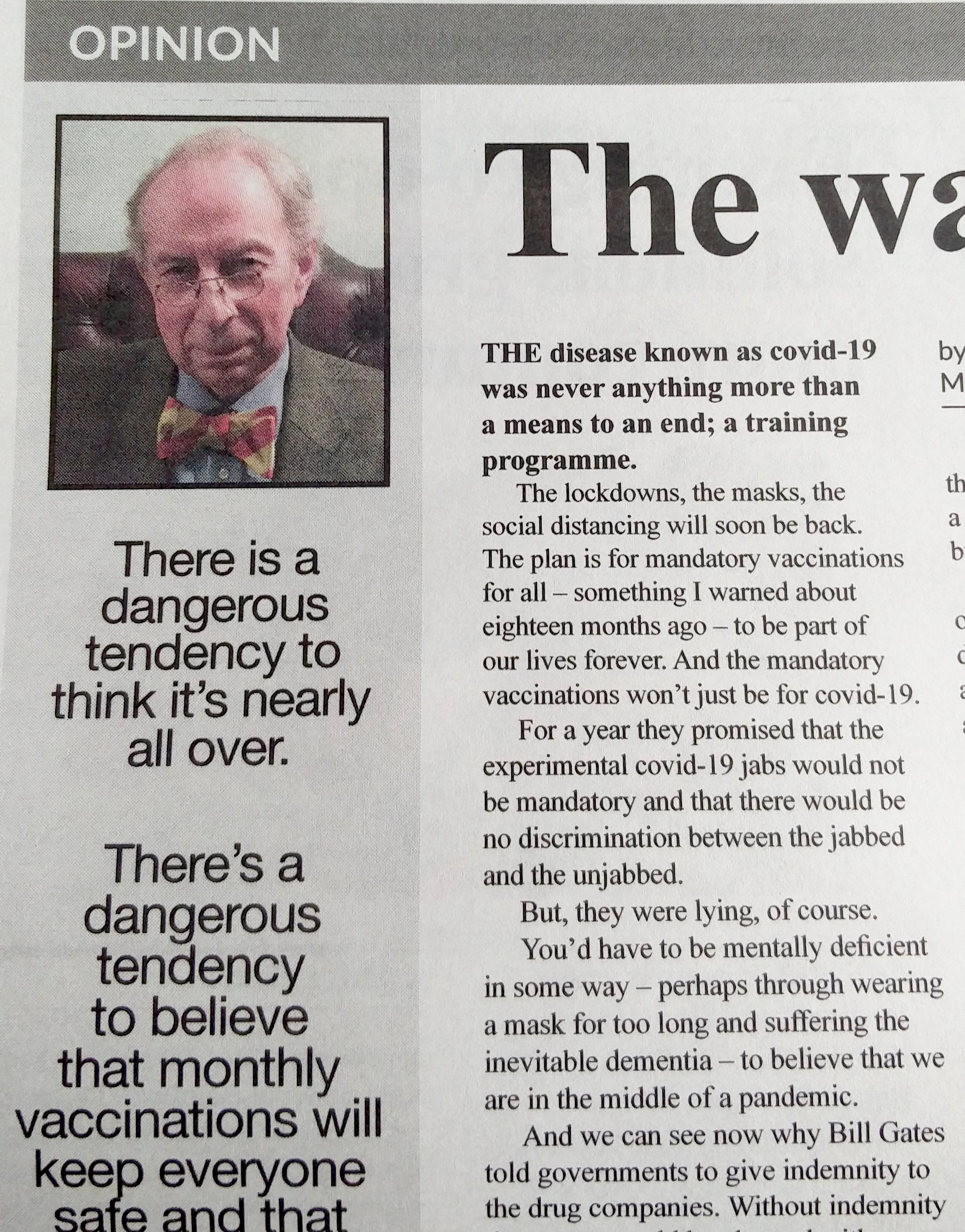 Pictured: An extract from Dr Vernon's opinion piece suggests readers would "have to be mentally deficient in some way - perhaps through wearing a mask for too long and suffering the inevitable dementia - to believe that we are in the middle of a pandemic."

One section asks why Jersey's MHRA Yellowcard scheme data - reports about serious reactions to the covid vaccine - is not separated from the UK's.

An advert, sitting above one promoting “radiation harmonising pendants” to protect mobile phone users, invited readers to purchase “counter-mainstream narrative coffee mugs” including slogans such as, “DON’T VAX THE KIDS".

The paper’s arrival in Jersey was welcomed by several members of the island’s growing ‘Freedom movement’. 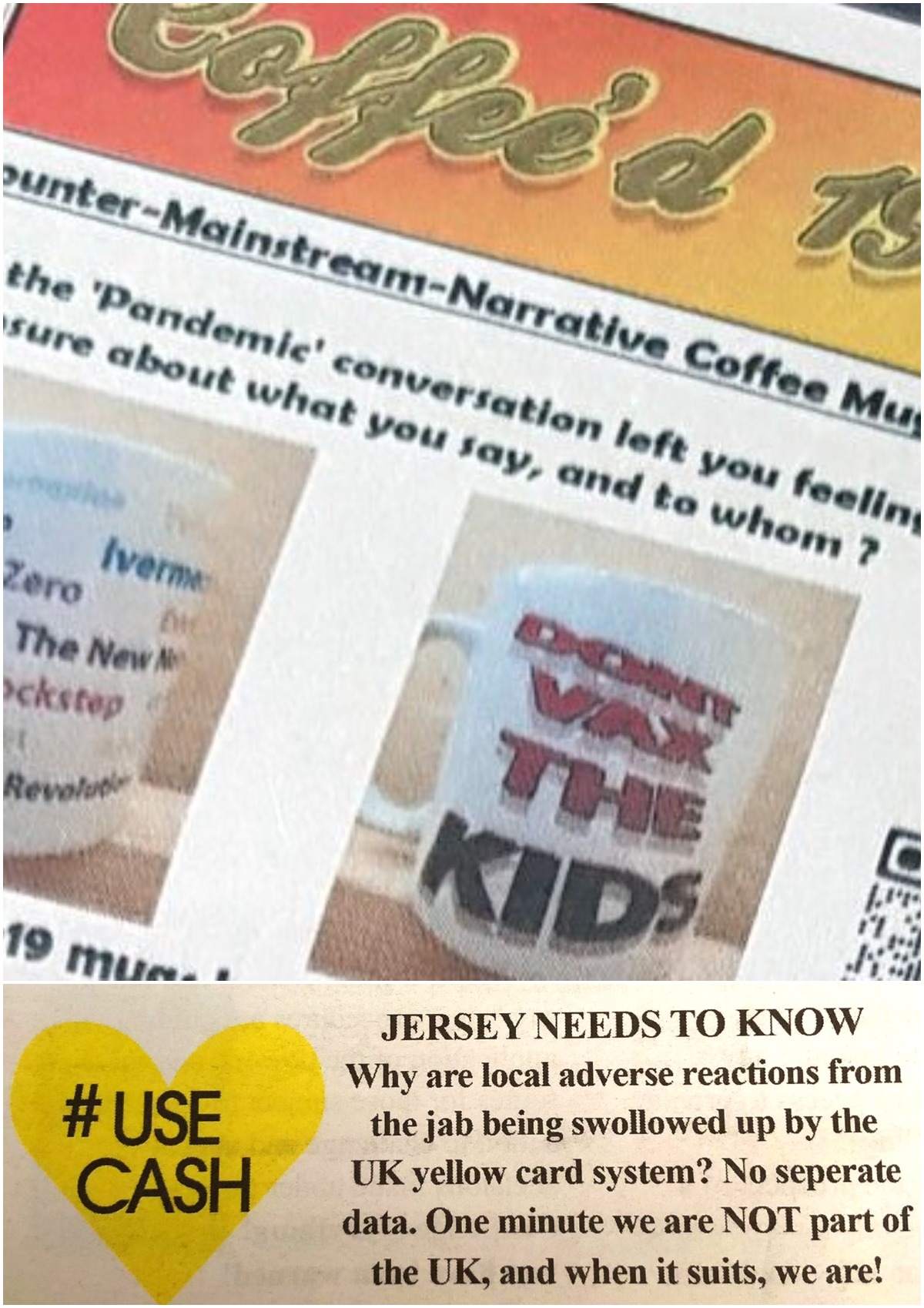 Pictured: Items featured in The Rock.

One Facebook commenter described its delivery across the island as an “excellent initiative to get the word out to every household”, saying that they were planning to thank Jersey Post for delivering the papers.

But many islanders took to social media to complain about what they described as “dangerous” misinformation, with some criticising Jersey Post for distributing it. 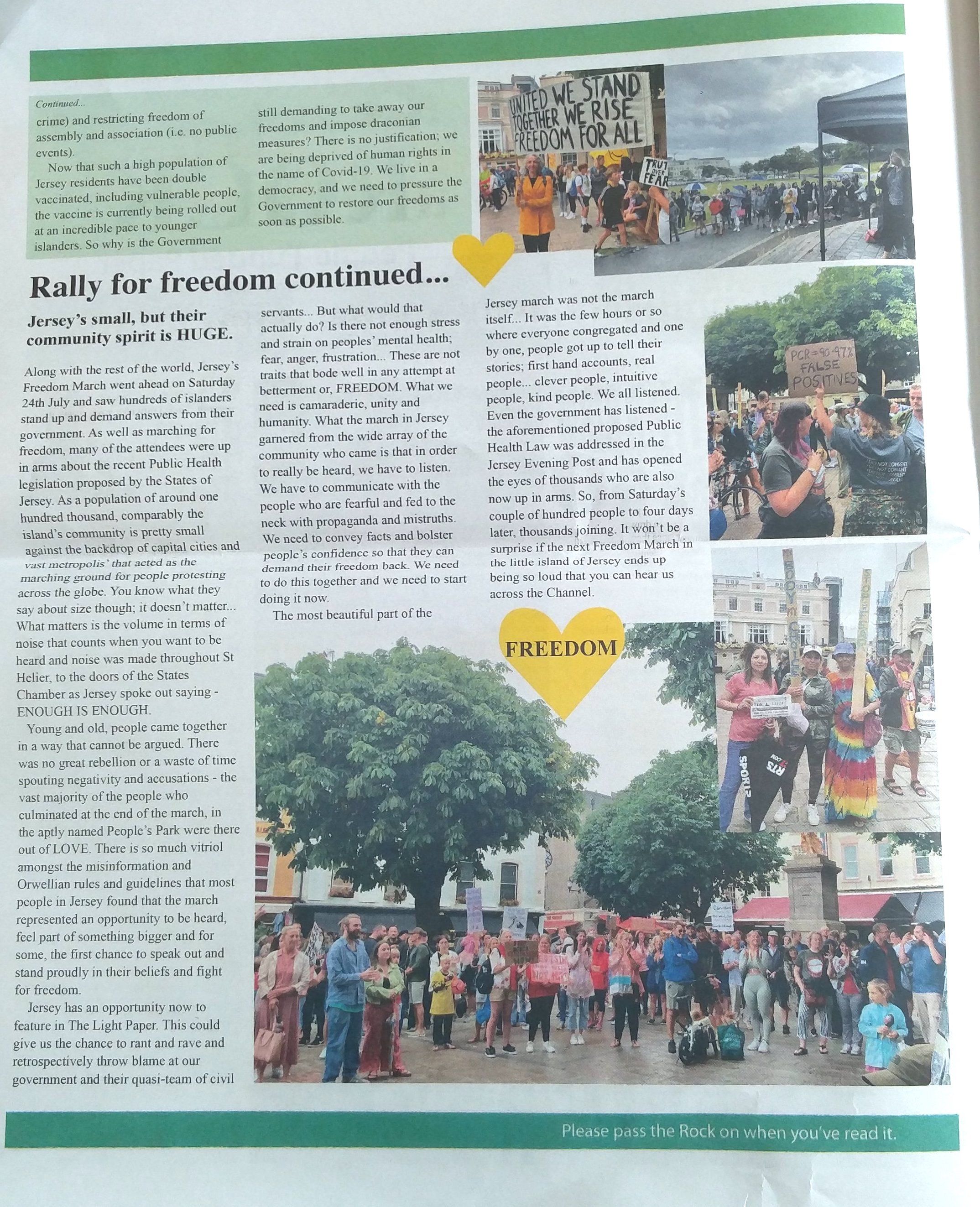 “Media like this is a slap in the face to all the medical professionals, volunteers and any person who has devoted their time to being part of the solution and helping people out during the pandemic,” said one Facebook user.

Senator Sam Mézec commented: “Our publicly owned postal service @jsypost is one to be proud of, and our postal workers have served us so well throughout the pandemic.

“However, their decision to accept a job distributing a nasty Covid conspiracy paper was a misjudgment. I am sure they will learn from this.”

Our publicly owned postal service @jsypost is one to be proud of, and our postal workers have served us so well throughout the pandemic.

However, their decision to accept a job distributing a nasty Covid conspiracy paper was a misjudgment. I am sure they will learn from this.

Some contacted Jersey Post to ask to opt out – including former CEO Kevin Keen, who said on Twitter: “…All for freedom of speech, but would not wish to receive future editions.”

Others responded with humour, with one commenter simply reacting to ‘The Rock’ paper, “Scissors.”

Deputy Chief Minister Senator Lyndon Farnham said it was “concerning to hear that a publication with potential misinformation is in circulation on the island.”

He added: “While I have not had the opportunity to review the publication in question, I will be working with officers to review the content. As ever, I would strongly urge islanders to ensure that their information about covid-19 comes from trusted, evidence-based, verified sources.”

Sorry can’t help, all for freedom of speech but would not wish to receive future editions.
No longer involved but I have no doubt @jsypost will be looking carefully at what happened.

Following queries from Express yesterday, Jersey Post responded in a statement last night, which was published on its social media pages this morning.

It said that delivering publications straight to islanders’ doors was a “valuable service that supports a wide variety of organisations and is part of our universal service obligation”, but noted that “any content or views expressed are those of the publisher, not Jersey Post, who are solely the delivery agent.”

It continued: “On Monday 16 August, we began distributing a publication entitled The Rock, which we are aware has offended some islanders following complaints we have received today. As soon as we were notified of the issue, we immediately suspended delivery while we conduct an investigation.

“We recognise some of our customers may not wish to receive certain (or any) publications in their mail, and we have mechanisms in place to manage this, by contacting our customer services team.”

On 16 Aug, we began distributing The Rock publication. Following complaints, we immediately suspended delivery. Any content or views expressed are those of the publisher, not Jersey Post, who are solely the delivery agent. https://t.co/k20soolug8

The Law Officers' Department declined to comment on the matter, but explained that the Postal Services (Jersey) Law 2004 describes items which must not be posted. It says that anyone posting - or causing to be posted - information capable of creating "harm" or that is "indecent, obscene or anything grossly offensive" could be liable to a fine and up to 12 months' prison.

Police said they had not received any complaints about the publication.

Contacted for comment, Advocate Hiren Mistry - whose column leads the front page of the paper - told Express: “I was surprised to see that I have an article published in The Rock, which was intended for another UK publication. The Rock did not contact me to ask for consent to publish my article and it does not have my consent to publish the article."

However, after contacting The Light's publishers, who he emailed the article to, he said that he had been offered an apology and would not be challenging the distribution of the newspaper.

Although the island’s postal service has suspended its deliveries pending investigation, Express understands that supporters of The Rock are planning on delivering more by foot in St. Helier this week.

Described as “people-funded”, the owner or Editor of The Rock is not clear. In an advert claiming “YOU can help share the truth!”, the paper says that 100 copies can be purchased for £15 via The Light's website. Express has contacted The Rock and The Light for comment and is awaiting a response.

It comes just one week after Police were called following claims of young people being harassed by protesters at a ‘Rock Up’ clinic at Springfield.

That week, graffiti also appeared on the Inner Road saying, “MASS murder by our doctors, wake up”. Islanders reacted with horror on ‘Jersey Coronavirus Chat Forum’, with one saying they were “appalled” to see the “sickening” messages “aimed at healthcare staff who have literally put their own lives at risk to help people for the last 18 months.”

Some members of the 2,000-strong Facebook group for the local ‘freedom’ movement distanced themselves from these actions, while others suggested the graffiti may have been carried out by individuals seeking to tarnish their reputation.

Last November, Jersey's Government started a campaign against fake news, urging islanders to take the following steps to ensure the information they are reading, and sharing, is accurate:

Posted by Robert Gabriel on Aug 17th, 2021
It’s almost impossible to comprehend the mindset behind whoever funded and distributed such an appalling publication. It’s even more incomprehensible to find that Jersey Post were complicit in distributing it!
Posted by Alan Keen on Aug 17th, 2021
Fortunately we live in a place where People can print, distribute and read what ever they like. Hardly fair to blame Jersey Post, they deliver all manner of unsolicited rubbish. You might as well point the finger at the company that actually printed this rubbish. WHSmith had the The Lighthouse rag a few weeks back. A demonstration there, hardly.
Posted by Franny Dee on Aug 17th, 2021
Hang on a sec! Jersey Post cannot be held responsible for delivering words that people do not like. (I dont like my bills!) We are lucky and live on an island that supports free speech - let people read what they like and assume they have the intelligence to make their own minds up. Maybe one of the pieces had a point about inappropriate government control over our ability to think for ourselves.
Posted by Private Individual on Aug 17th, 2021
George Orwell's society is here.
Posted by Scott Mills on Aug 17th, 2021
jeez, reputable news sources mr farnham, what like CNN and BBC. the sheep (robots) loving channels who want to be controlled and locked down for the rest of their lives. All this publicity is brlillant for the producers of the free mag, well done to all those who complained. Lovely beaches, you'll soon need a double jab to visit them.
To place a comment please login Login »