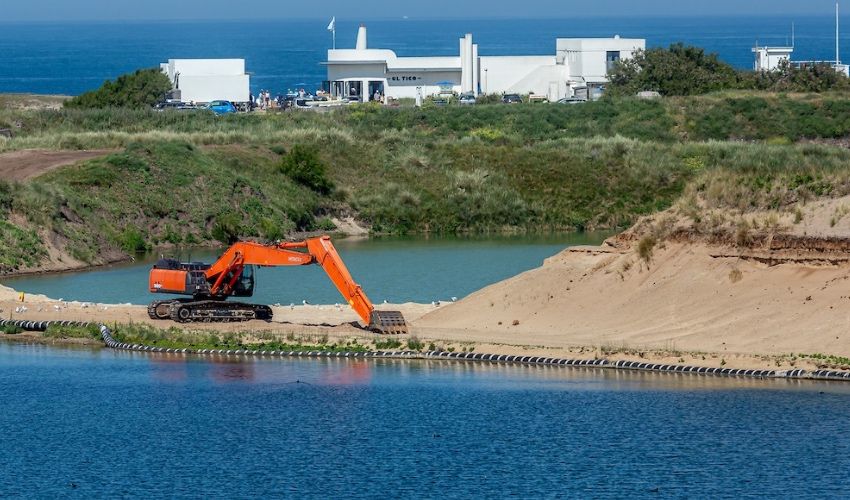 Seven employees of Simon Sand and Gravel are facing redundancy as the family-owned company closes its quarry in St. Ouen’s Bay after 112 years.

It means that Jersey will have to import most of its building sand for the first time – and a ship carrying 2,000 tonnes is due to arrive from Holland tomorrow morning.

Two weeks ago, quarry owner Jason Simon said he had reached the limit of what he had permission to dig and would suspend extraction from the beginning of this month.

Mr Simon, however, believed that there was a triangle of land within his boundary that could still provide a significant quantity of sand. But the Government has concluded that he would need to make a new planning application to extract it – something Mr Simon is not prepared to do.

This is because the Government has long said that it wants the quarry to close and for the Island’s building trade to use alternative sources of supply. This was reinforced in the latest draft short-term Island Plan, which envisaged the quarry closing at the end of 2023. 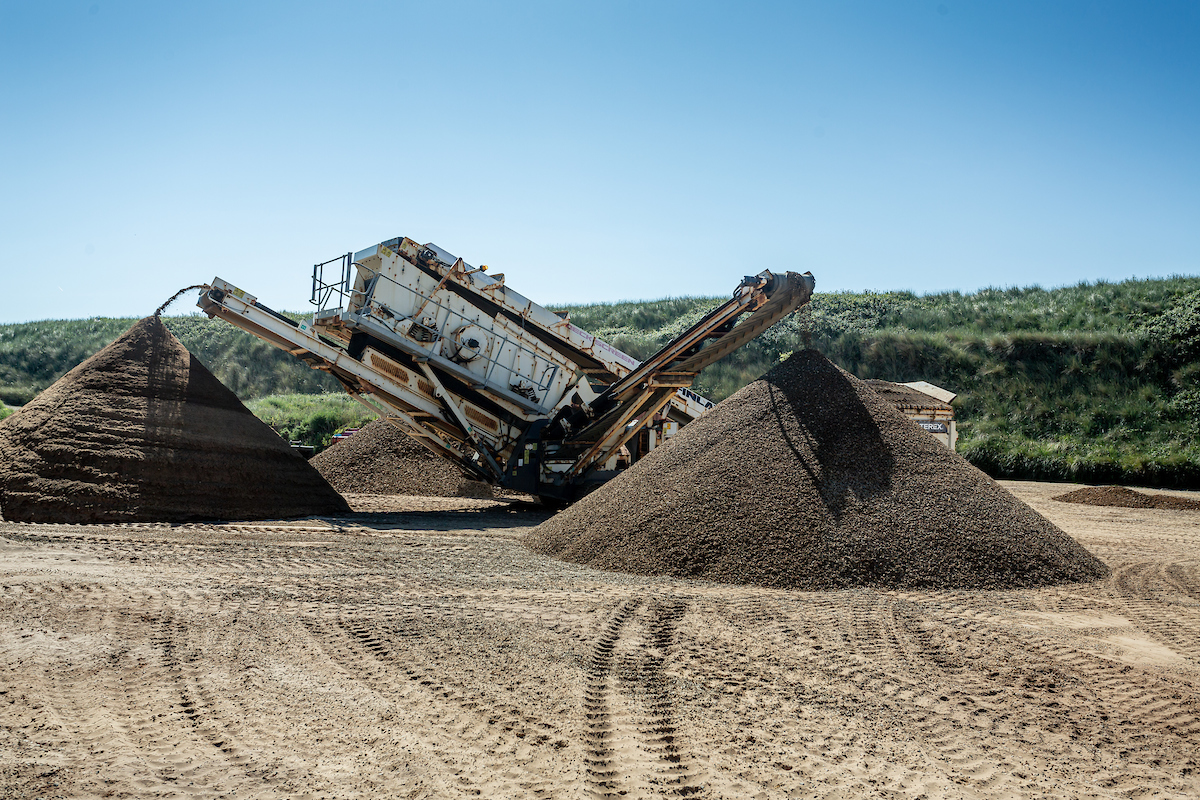 Pictured: Building sand and gravel is graded at the quarry in St. Ouen's Bay.

This has led Mr Simon to put his staff on four weeks’ notice of redundancy. He remains hopeful, however, that some agreement on the restoration of the quarry will allow some or all of his team to move on to that project.

Explaining his decision to close, Mr Simon said: “I don’t have permission to extract any more sand, and I’m not going to put in a planning application when the Government’s intent since 2000, when it published its minerals’ policy, is to shut me down.

“However, in 2018, the Government realised that they didn’t have credible alternative arrangements in place, so I was given a five-year permit to extract sand, which was exhausted at the end of August.

“However, there is other sand within the boundary, which we didn’t intend to extract at the time but could easily be dug without expanding the limits of the quarry. But last week the Government said I couldn’t take that sand without applying for permission.

“Although my team are on four weeks’ notice, I am hoping that we will reach agreement with Government about the restoration in that time. If we do, then my staff can hopefully transfer on to that job.

"Environment Minister John Young said that he had not seen a restoration plan until recently, but that is not true: we have had a plan for 30 years and it was always the intention of my family to retain the lake and create a marine environment.

“Government, however, then insisted in 2018 on a complete restoration, with the lake being filled in. I have spent the last three years trying to understand the implications of what they want to do.”

Asked how he felt about the closure of the quarry, Mr Simon said: “I am not going to fight anymore; one man cannot stand up to a government. I only want to dig to my quarry’s current boundaries." 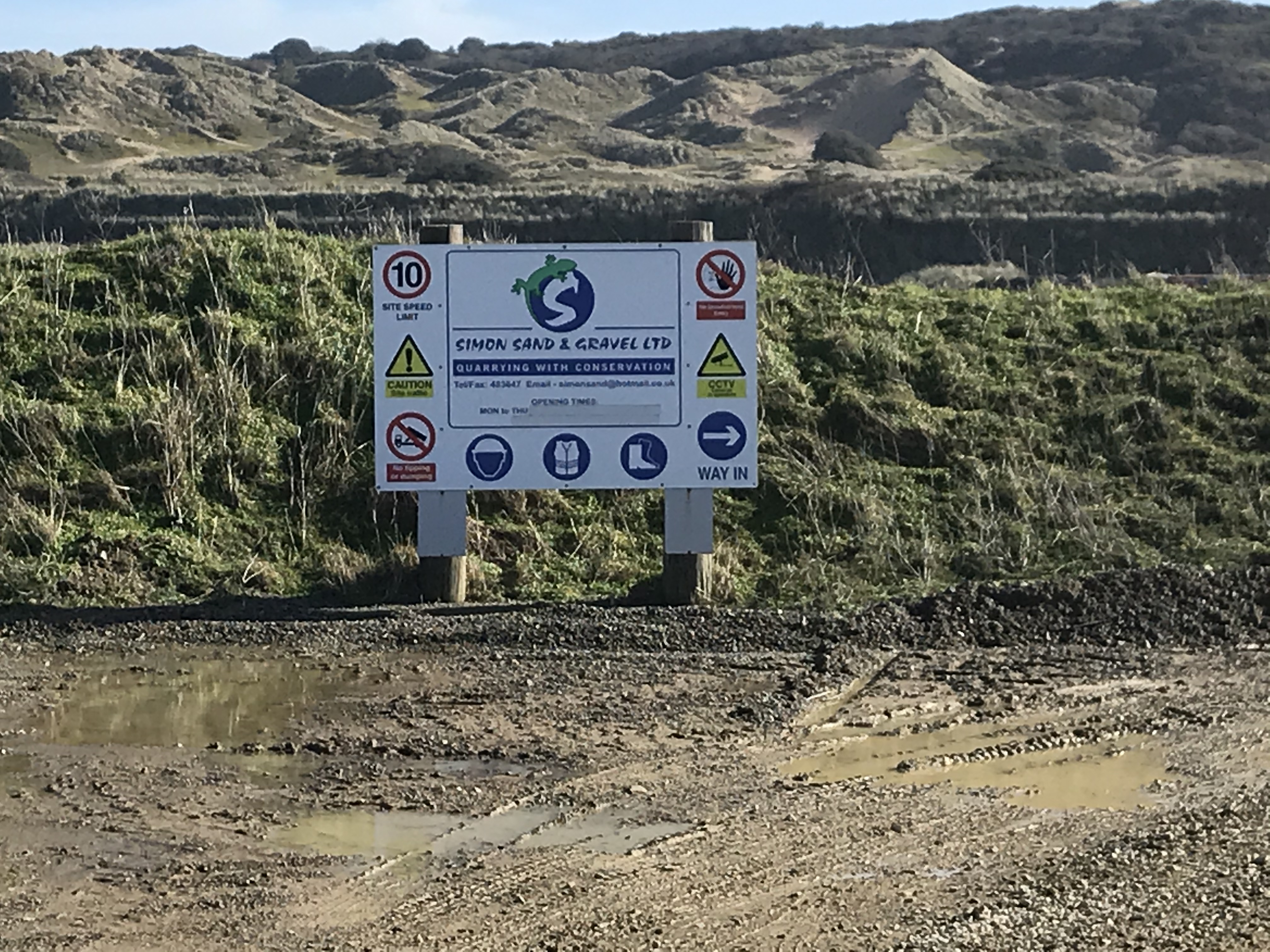 Pictured: The National Trust has long campaigned that the quarry should close, arguing that Jersey is the last place in Europe to use dumelands for building sand.

He continued: “I feel resigned to the fact that the Government has finally got its wish. It is easy to say ‘stop digging’ but the implications have not been thought through; we might be reducing our carbon emissions in Jersey, but the sand is now simply being dug elsewhere, so there’s no actual reduction.

“Surely, it is common sense that Jersey uses its own resources, where it can be properly controlled and managed, before asking someone else to use up theirs.

Deputy Young said: “Other quarries have opened and closed in Jersey and, at some point, you have to recognise where the limits are.

“When we gave planning consent in 2018, we thought there were still winnable reserves up to the end of 2023, but officers have visited Mr Simon recently, and it is clear that the area that he wanted to expand into would need further planning permission.

“Restoration has been a planning condition for the last three decades. The quarry once produced a simple outline plan but that is long out of date as so much more sand since been extracted.

“But I am pleased to report that we have now received a restoration plan.

“There is a lot of work to do: it is a very large and deep body of water which inevitably will require some in-fill material. However, to be clear, it is not a waste site so it that material will not be waste. If that were to happen, the operator would need a waste licence as well as planning permission, and there would be a full public enquiry.

“The restoration plan will need the final approval of the full Planning Committee.” 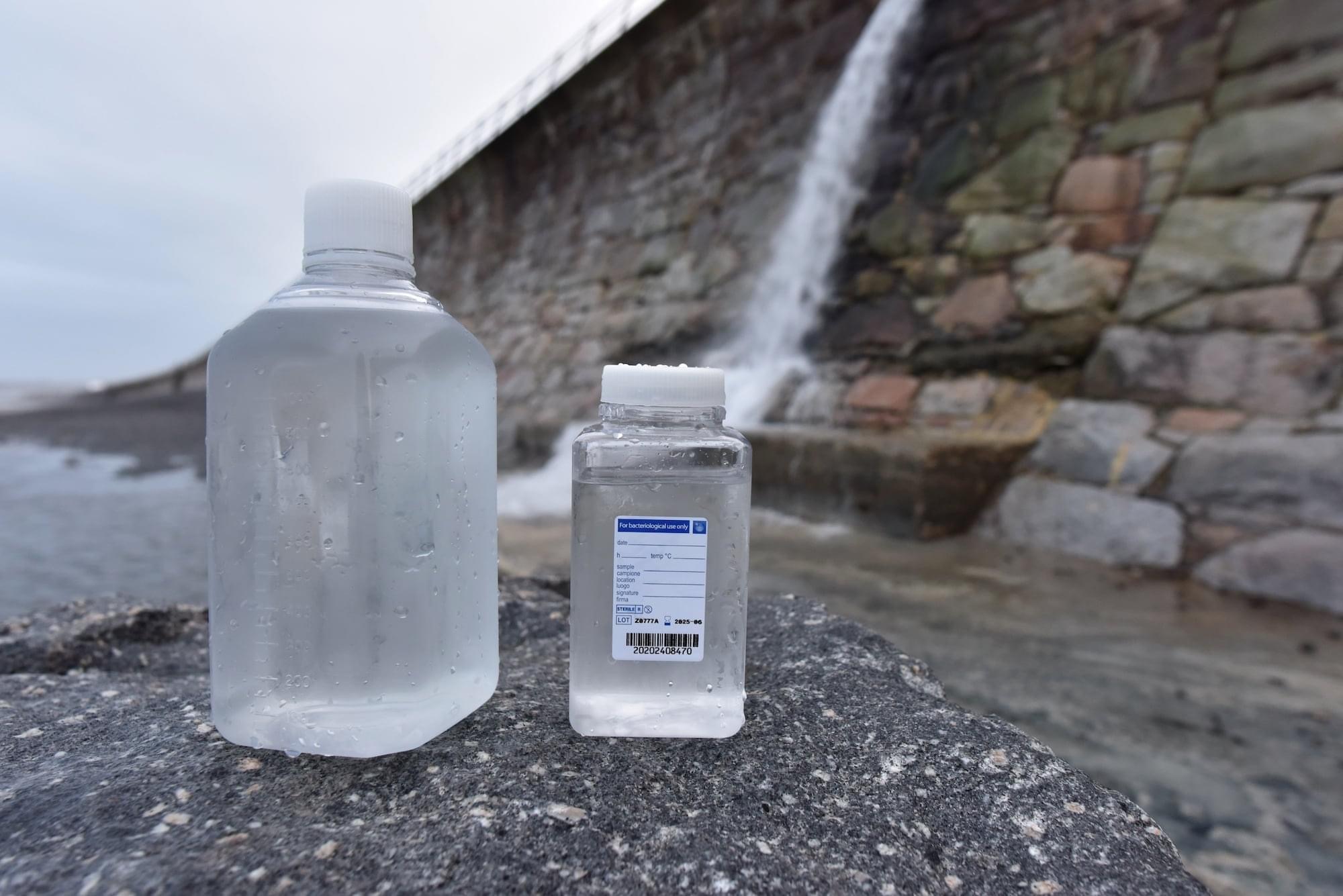 Pictured: The water in the quarry's lake is contaminated with a chemical called PFAS, which was an ingredient of firefighting foam once sprayed at the Airport.

Asked who had responsibility for the restoration, the Minister said: “In my view, it will be the liability of the current owners as they have received the value of the site. I understand that a levy from extraction was due to go into a trust to pay for the eventual restoration, so we need some clarification on the state of that trust.

“There are other matters to deal with, including how we will rewild the site and how to deal with the PFAS contamination in the water, which is preventing important water extraction from boreholes in the bay.”

Meanwhile, concrete-manufacturers in the Island have responded to the closure of the quarry by arranging for a ship to bring a bulk load of sand to the Island.

2,000 tonnes are due to arrive on the British-registered MV Neptune, which is currently sailing from the Dutch port of Terneuzen to Jersey.

The ship, which has its own onboard crane, is due to berth alongside the New North Quay early on Thursday. Its cargo of loose sand will then be offloaded to trucks and stored at sites around the island.

INSIGHT: Making the grade - the future of recycling arrives in Jersey - Express explores an alternative method of sand production...

Posted by gordon le claire on Sep 8th, 2021
death of another local company seems our government want to kill off local owners
Posted by John Henwood on Sep 8th, 2021
This is a disgrace. The Simon family are decent people whose business is being destroyed out of political correctness. If this is Deputy Young's legacy as a States member (he says he won't seek re-election) it will haunt him as the effect of the closure is felt through significantly increased building costs. It will make so-called affordable housing even further out of reach of the ordinary person. It's madness - with more sand in Jersey than money, we will be exporting cash to import sand! How stupid. The Simons are sensitive to the ecology of the area and have always left excavated areas in good shape, providing a suitable habit for wildlife and ultimately, if they were allowed to continue, they would eventually leave the area as a valuable leisure resource. Shame on you Deputy Young.
Posted by Richard Milner of leeds on Sep 8th, 2021
Sounds bonkers to me. Not sure how this is going to help our quest for carbon neutrality either.
Posted by Scott Mills on Sep 8th, 2021
Ps. I do hope the sand arriving from Holland is the "right" sand, and not like the used and below standard road tarmac.
Posted by Wayne Le Cuirot on Sep 8th, 2021
Jersey, the only place to have had a sand quarry in the middle of a national park, it should have been closed down yeas ago.
Posted by Steven Simon on Sep 8th, 2021
Appreciate your comment Wayne but never was a national park when we started 112 years ago.
My family have respected the bay and still do so. As we have always respected the wildlife and worked alongside it for many years.
Posted by Private Individual on Sep 8th, 2021
Another government debacle.

How on earth has Jersey got to this position?
Posted by David Moon on Sep 8th, 2021
Extraction of sand was taking place in St. Ouens Bay long before ti was designated a national park and the freedom of the public to use the area for various social activities such as horse riding, motorcycle scrambling etc was curbed by the National Trust lobby, they even planted the open spaces with low spreading roses which gave dogs a prickly reception on the pads of their feet. Are these areas just places for one section of the community to gaze upon or for the benefit of all whatever their interests business or otherwise.
Posted by john garner on Sep 8th, 2021
John Garner
The alternative sand stores to store the imported sand will them selves need a change of use application to planning ?
Posted by Glen Rayner on Sep 8th, 2021
Jersey, the only place to put a National Park around a sand quarry.
Posted by Keith Marsh on Sep 8th, 2021
The current Government continues in its STUPIDITY. Dutch sand has many eco-miles per ton already, when it gets here it is going on trucks to storage yards. BONKERS !
Of course, Gov.je did not really want to provide lower cost homes, they have no hope now.
Posted by Sarah Simon on Sep 8th, 2021
This is not an environmental issue. Feel free to contact me and I will prove to anyone the incredible volume of wildlife in the quarry.
This is a political issue whereby your Government want to landfill the site at their discretion?. FIve months left at La Collette is it boys?
Funny how the National Trust don't seem too bothered the Government polluted the national park of which they own most of it?
Posted by Jon Jon on Sep 9th, 2021
Sarah is totally correct,the incompetence of States Members just gets worse!
To place a comment please login Login »