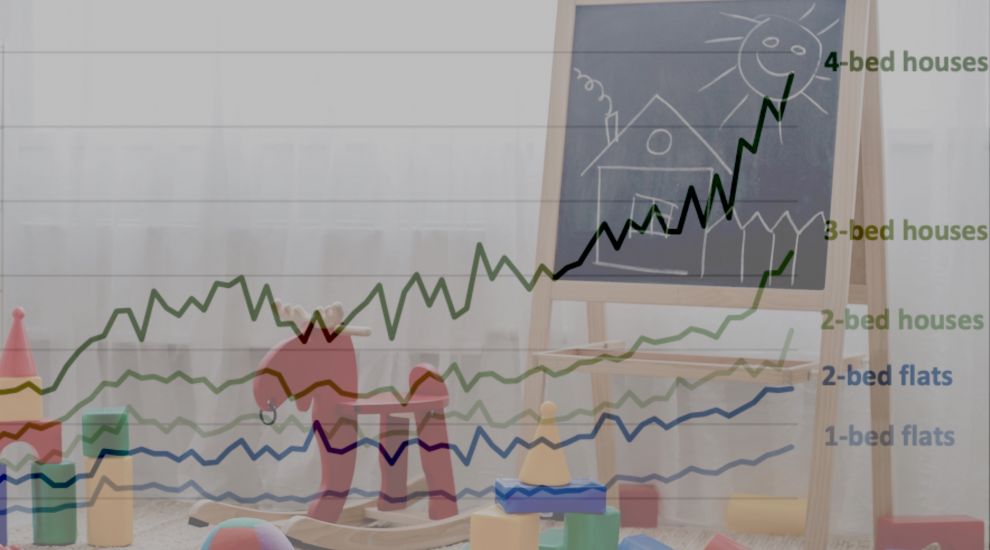 It would take more than three people working full-time jobs to pay off a mortgage “affordably” on a three-bedroom house – with prices now averaging £861,000.

What was traditionally considered an ‘average family home’ would now only be “affordable” to a household with an annual gross income of £133,000 and a net income of at least £100,000.

To make the purchase of such a property “affordable” for a household with average income, the price would have to drop by more than £300,000 – or the burden of a mortgage would have to be spread out over 3.1 full-time employees on average salaries.

The stark findings were contained in a report released by Statistics Jersey today.

It found that, by the end of 2021, the average price of a house in Jersey soared by 16% - the highest rate of increase since 2008 – with all property types recording their highest prices ever. 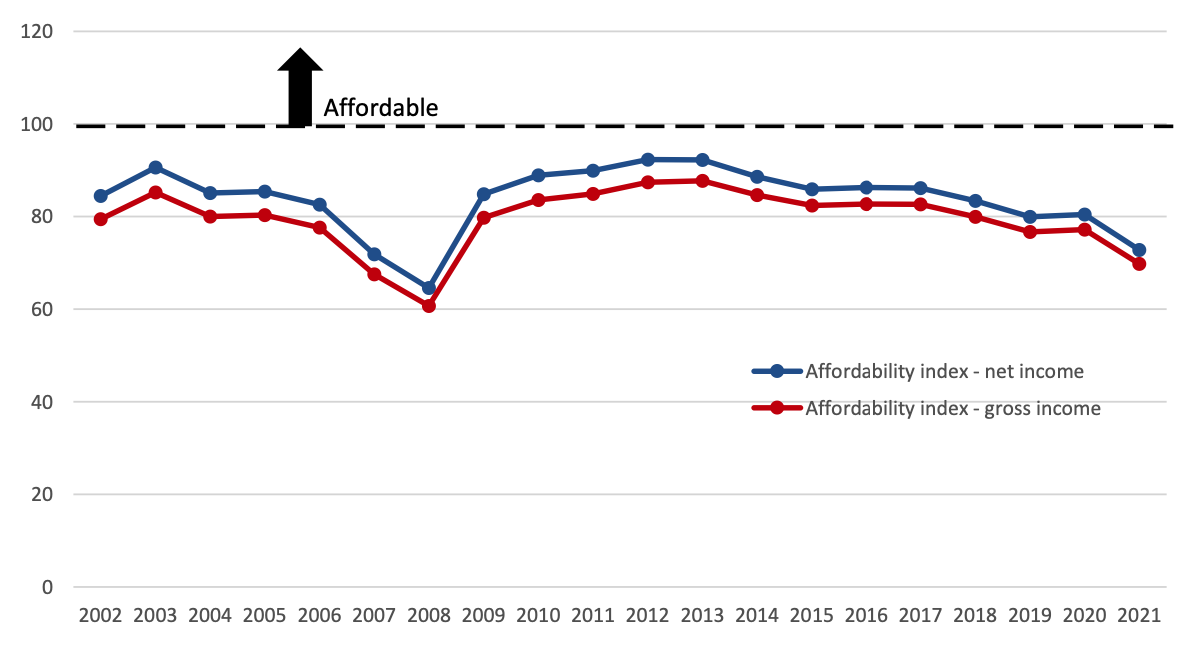 CLICK TO ENLARGE: How property in Jersey has become less affordable over the years

The statisticians defined affordability as a situation in which mortgage payments consume no more than two fifths of net income, with the purchaser servicing a 90% mortgage at a variable interest rate for a term of 25 years.

According to their research, the affordability of all properties worsened between 2020 and 2021 - apart from two-bed homes – despite record low interest rates.

A two-bed flat, meanwhile, officially became unaffordable for the first time since 2008.

And it was further bad news for renters hoping to save up to become buyers, with advertised rental prices 2% higher than in 2020.

Despite soaring prices, property sales rose by a fifth in 2021, driven by a 28% rise in one-bedroom-flat transactions and an 11% increase in house sales.

The mean price of one-bedroom flats sold in the last three months of 2021 was £339,000, which was £14,000 higher than in the previous quarter and was the highest mean price ever.

The mean price of two-bedroom flats sold in the last quarter was £496,000, which was £5,000 higher than the third quarter of 2021 and was the highest mean price seen to date.

For the first time since 2008, statistics showed that a working household with a mean net income would not be able to affordable service a mortgage on a median-priced two-bed flat. The gross earnings of two full-time workers would be needed  in order to make it "affordable" - or the price would have to drop by £27,000. 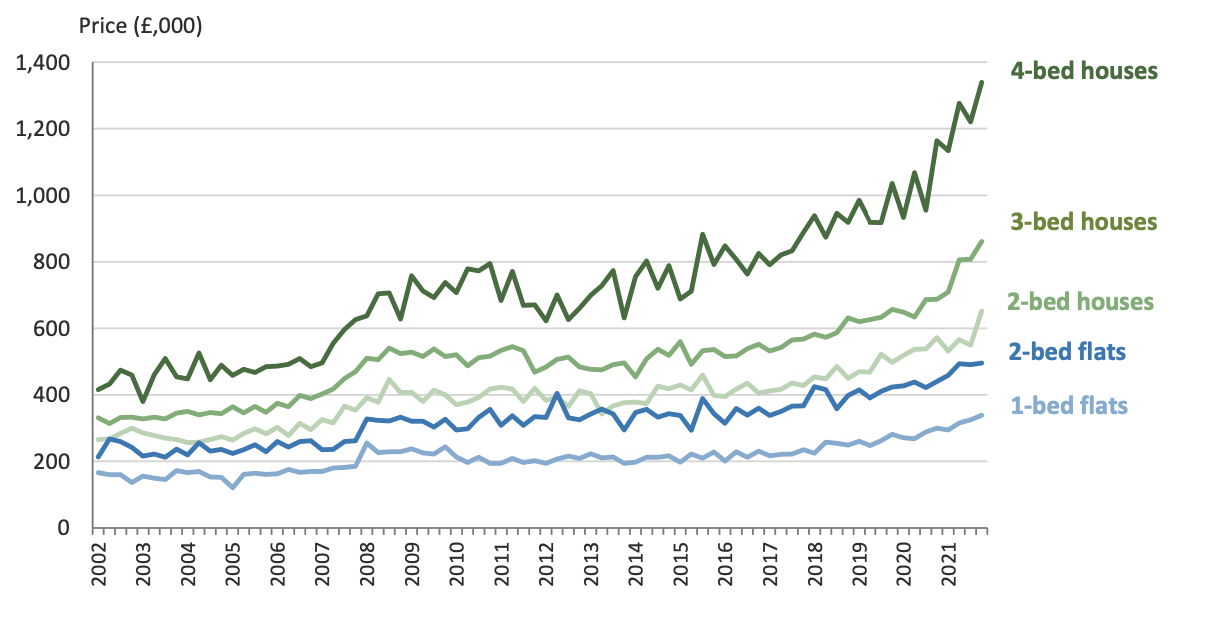 This was the highest mean price for this property type recorded to date.

The mean price of four-bedroom houses sold in the last quarter was £1,339,000, which was £119,000 higher than in the previous quarter and was the highest mean price seen to date.

Pictured: Thee median prices of two, three and four-bed homes in 2021 and the qualifying net income required in order to service a mortgage “affordably” - the ‘deposit gap’ is the difference by which the median dwelling price exceeds the affordability threshold, expressed as a factor of mean net household income (£60,100).

The last quarter also saw a significant number of four-bedroom houses, around 40, being sold for more than than £1,000,000.

How does Jersey compare to Guernsey and the UK? 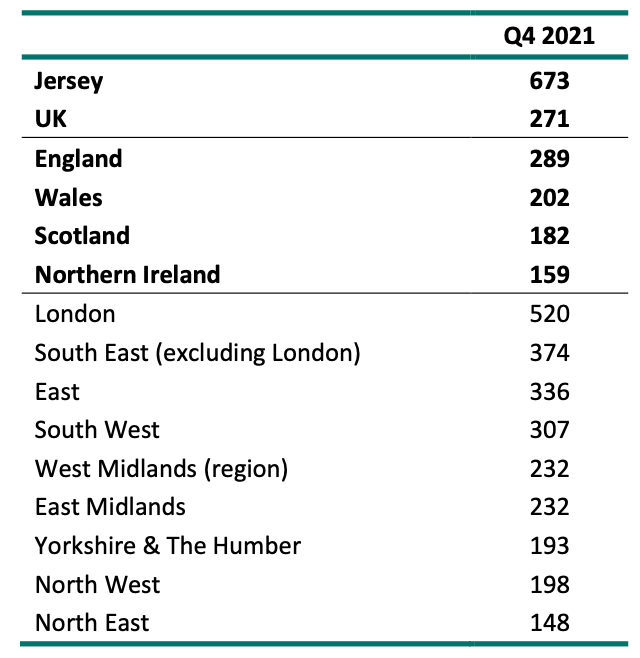 How many homes are being sold?

On a rolling yearly basis, the total activity of the Jersey housing market during the 12 months ending 31 December was 7% higher compared with the year ending 31 September and was 39% higher than in the corresponding quarter of 2020 (Q4 2020).

On a quarterly basis, total market activity in Q4 2021 was:

Is anything being done?

The Government hope that increasing the supply of houses will help bring down the price of houses.

If approved next month, the Bridging Island Plan will allow for the building of 4,3100 open market and affordable homes by 2025.

On the demand side, States Members have recently approved a population policy which establishes that, following three years of systems development and data collection, a meaningly population target may set by 2025.

Posted by Jon Jon on Feb 18th, 2022
Wait till the crash comes, housing prices will tumble as fast.Going to happen one day!
Posted by Sheila Young on Feb 18th, 2022
The so called housing crisis is nothing new to Jersey. Years ago landlords got away with renting what were virtually garden sheds and cupboards to people, thankfully this would not be allowed to happen now. The island is over populated and overbuilt, the government is doing nothing to control either of these factors, many of them are probably profiting in some way from these new buildings. Here is a possible solution CHANNEL ISLANDS: Jersey: serious housing shortage; supply of aluminium pre-fabricated houses.Date:1946-1948
Don't know how much they would cost these days though!
Posted by Private Individual on Feb 19th, 2022
Simply stop the massive immigration that is coming into the island to feed the construction industry.

It is not rocket science it is common sense.
To place a comment please login Login »