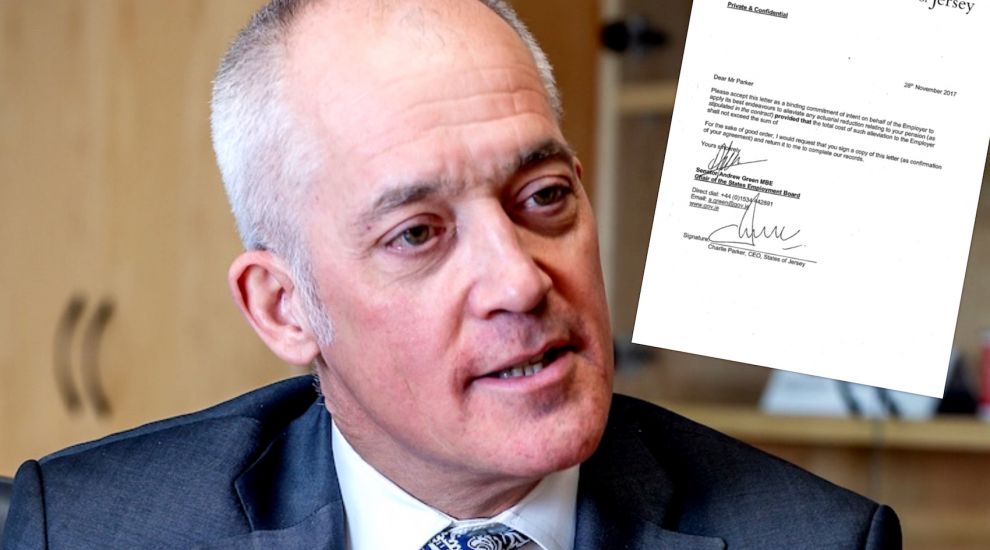 The Government is refusing to reveal how much it agreed to ‘top up’ the former CEO’s pension upon his early retirement.

Normally, pension benefits accessed before normal pension age are reduced due to the longer period of payment. However, the Government took the unusual step in 2017 of agreeing that, should Charlie Parker want to step down before he was 66 years and four months old, they would do their best to cover this loss.

The controversial perk, which caused a stir among States Employment Board (SEB) members at the time, was negotiated and confirmed in a ‘side letter’ accompanying Charlie Parker’s contract.

Its existence only emerged following the storm over his £500,000 departure pay-out, which the Government’s spending watchdog said following a probe last month she believed to be “in excess of his maximum entitlement under his contract of employment and associated side letter”.

Express requested the side letter under the Freedom of Information Law to shed more light on the divisive sweetener.

The letter was released in line with the request at 19:55 on Friday – but with the crucial sum redacted. The Government said this was because it was “personal” information. Express will be appealing this redaction.

It read: “Please accept this letter as a binding commitment of intent on behalf of the Employer to apply its best endeavours to alleviate any actuarial reduction relating to your pension (as stipulated in the contract) provided that the total cost of such alleviation to the Employer shall not exceed the sum of [REDACTED].” 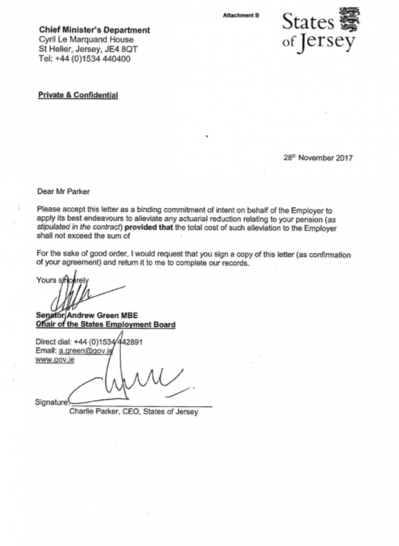 CLICK TO ENLARGE: The 'side letter' containing the pension agreement, released following a request by Express under the Freedom of Information Law.

It was signed by Senator Andrew Green MBE, who at the time was Chair of the States Employment Board, and Charlie Parker on 28 November – two days before he signed his contract.

It remains unclear how much of Mr Parker’s £500,000 pay-out, which followed his agreement to step down in the wake of the row over his second job, was a ‘golden handshake’ and how much related to ‘topping up’ his pension.

In a report on Mr Parker’s termination arrangements, Comptroller and Auditor General Lynn Pamment confirmed that if the amount of money needed to alleviate the pension reduction for early drawing was less than the cap specified in the ‘side letter’, “only such lower amount would be payable.”

She was also clear that the clause “does not provide a right for any increase in pension benefits in the event of early retirement”.

Ms Pamment said that the clause would be triggered in any situation in which the Chief Executive chose to retire before reaching pension age – not just if there was “mutual agreement” that he should leave his job early.

She described the pension perk as a “matter of debate” by the SEB before Mr Parker’s contract was agreed, adding that, in the original draft contract of employment, the was no cap on how much taxpayer money would be used to ‘top up’ Mr Parker’s pension if necessary.

The cap was added later due to concerns “about the potential liability faced if the former Chief Executive transferred other pension benefits to PEPS [the Public Employees Pension Scheme, ed.].”

Minutes of a crisis SEB meeting held to decide how much Mr Parker should be paid off said the panel of politicians was “prepared to offer the minimum contractual entitlement to Mr Parker”, and believed this to be £500,000.

However, this was actually the “maximum” entitlement if there were a particular set of circumstances – the C&AG said these circumstances “did not exist” when the compromise agreement was signed.

Despite her review finding that Mr Parker’s settlement did not match up with what was agreed under his contract, she said that the sum itself was “not unreasonable” in light of the legal battle the Government may have otherwise faced.

The ‘unusual’ payment led the Government to receive what was believed to be the first ever qualified sign-off of their Annual Report and Accounts from auditors.

The Public Accounts Committee – a panel of politicians responsible for examining how taxpayers’ money is spent – is currently reviewing the controversial payment as part of its wider scrutiny of the Government’s 2020 Accounts.

In a PAC hearing earlier this month, Interim Chief Executive Paul Martin confirmed that a closer eye was now being kept on contracts.

Posted by John Sheen on Jun 21st, 2021
Scandalous that this figure is being withheld when it is taxpayers money. Good on the Bailiwick for appealing against the decision to redact it.
Posted by Jon Jon on Jun 21st, 2021
Its tax payers money so of course we have the right to know how much,Goverment know full well when its released there will be an outcry from public, and twelve months time election!
Posted by gordon le claire on Jun 21st, 2021
I plan to retire early will the states top up my pension to the full amount if I stay the full term
Posted by Private Individual on Jun 21st, 2021
This just keeping better and better, we all have to work 2 years more to get a miserly pension and this guy gets hundreds of thousands of our tax money to retire on, all whilst trying to take on a second job to bolster his extortionate pay!!

Only in Jersey!
Posted by Michael Blampied on Jun 21st, 2021
I’m actually wondering if the amount was actually redacted at all. I reckon it’s been deliberately left blank so that CP could insert the figure himself. After all he approved his own press communique regarding his evening job and, if I recall correctly wasn’t the independent nature of his annual performance subject to some questioning? He must thank the man upstairs in his prayers every day for getting him the Jersey gig - what a cracking result - its literally the gift that keeps on giving (well for him it certainly is).
Posted by Michael Blampied on Jun 21st, 2021
Apologies. In my previous comment the word “assessment” was inadvertently omitted and should be inserted immediately after “annual performance”
Posted by The old git Git on Jun 21st, 2021
Well the goose was laying the Golden Egg when he got the job.
Posted by L Brindle on Jun 21st, 2021
Any sign of the 100 million pound savings promised to the long suffering tax payer? The forthcoming huge debt doesn't belong to the man or woman in the street, it's the governments poor management and frivolous, reckless use of public money that's racking up the problems looming large. Ian Duncan Smith said, not long ago, on national television, that politicians lie because the don't want you to know what they're doing. If proof of that were needed, look no further than gov.je.
Posted by IanSmith97 on Jun 21st, 2021
EARLY RETIREMENT? He was sacked was he not? Like L Brindle I have yet to see a fully audited, truthful breakdown of his ‘savings’. I posted regularly on here we would never see £100,000,000 in savings. Apart from moving pieces about the chessboard (staff, departments, offices) and closing offices to the public what did this disastrous appointment verifiably achieve? I think we should be told. Breath not being held.
Posted by Keith Marsh on Jun 21st, 2021
With this present Government you can get what you want, if your in the Chief Minister's circle.
Parker's appointment, his view of the Jersey Civil Service was wrong at the outset. His promises of massive savings were never going to happen. We have ended this sorry period with more department chiefs, with massive salaries and less workers ~ longer "customer" replies and I am told the lowest morale factor ever.
We need to clear our minds of Parker as if he had never been.
Posted by Yvonne Raynes on Jun 21st, 2021
Disgusting and to think people are struggling and the Government is not increasing Pensions and Benefits for the people of Jersey but Charlie Parker seems to get everything. Has he still got his housing qualifications, it would be interesting to know the truth
Posted by PatrickGormley9 on Jun 22nd, 2021
Less than one year to get rid of J le F , Gorst & Farnham
Posted by Scott Mills on Jun 22nd, 2021
Stay classy government of Jersey. Keep carrying on and you'll only have your States mates living on the island. This has to stop, this dictatorship, cartel, brown paper envelopes, calling homes "affordable" and "luxury built", . Remember you think Charlie is pushing his luck (big time), but the States are no sweeties, they just as dodgy and as jammy dodger. Still, one day soon I'll be admiring jersey beaches from an opposing vista. Still we got lovely beaches
To place a comment please login Login »