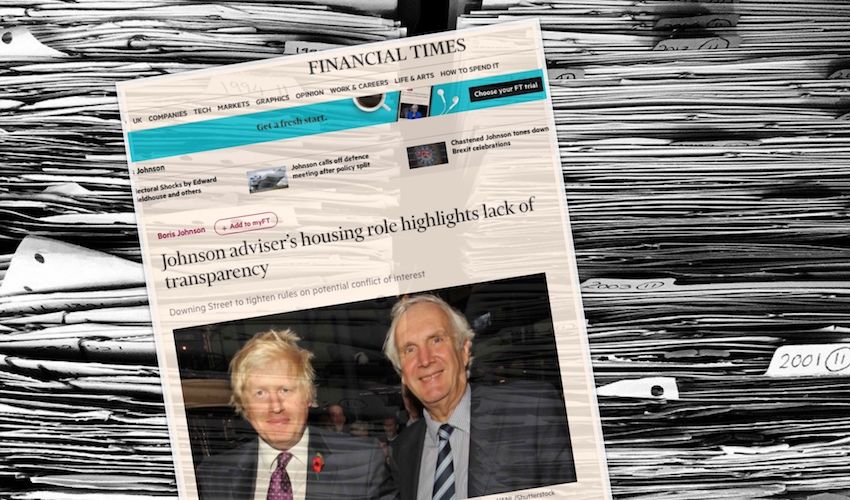 A close adviser of Prime Minister Boris Johnson is under fire for failing to disclose his ties to a Jersey-based company.

Sir Eddie Lister (70), who holds a key strategy role in Number 10, joined the board of the business – a holding company for Derbyshire start-up TopHat, which specialises in designing and constructing homes – as a non-executive director last year.

According to the Financial Times, the directorship was not disclosed by the government, nor was it disclosed in Jersey, meaning that there was no way for the public to find out about the role – an obstacle designed to protect against any conflicts of interest.

Pictured: Number 10 is now changing the way in which special advisers' potential conflicts of interest are registered.

The revelation led to criticism from Labour’s spokesperson on Cabinet Office issues, Jon Trickett, who said: “The situation is so lacking in transparency it leaves a nasty taste in the mouth.

“You have to have absolute transparency so that you know the outside interests of everyone who works in Downing Street, or indeed elsewhere in government.”

The FT report explained that the Number 10 was now looking to update model contracts for special advisers to enhance transparency surrounding their outside interests and better tackle potential conflicts of interest – though they denied this was related to Sir Eddie.

Downing Street stressed that the strategic adviser – a longstanding Johnson ally, who served as his Chief of Staff for five years while he was Mayor of London – acted with “complete propriety”, having notified officials when he took up the unpaid position, which followed talks in May.

It was also reported that he had made an effort to remove himself from discussions involving housing.

“There are things that might change over these four months”