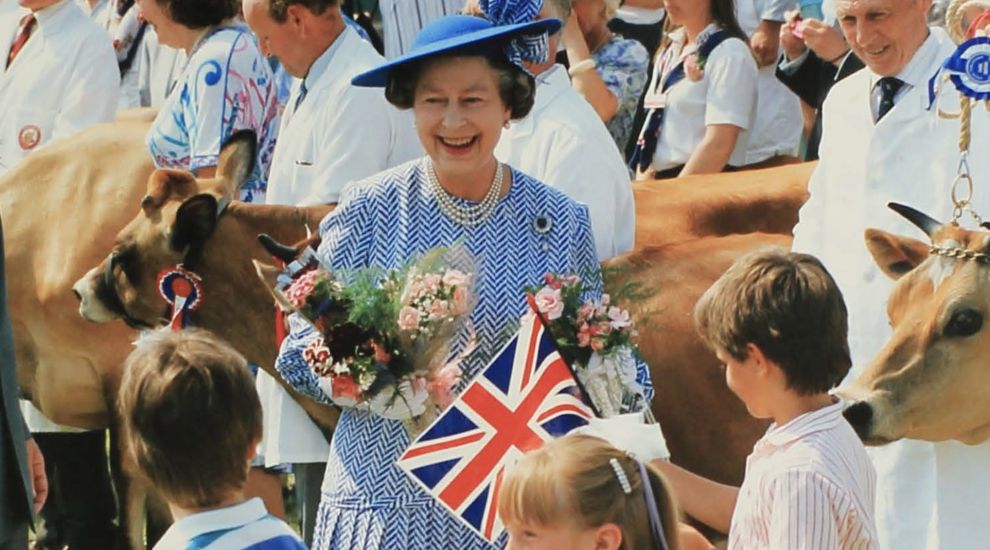 The Queen’s fourth visit to Jersey in 1989 marked a more relaxed atmosphere than on previous occasions and showed how the monarchy was adapting to a changing world.

This week, Express has been looking into each of Her Majesty's visits to Jersey.

In the space of a little over a decade since her last visit, Britain had elected its first female prime minister; and had gone to war over the Falklands.

Closer to home, Jersey’s population had jumped from 73,000 to 84,000; the island had gifted the Falklands £5m to aid their recovery; the States had abolished the death penalty; and St. Lawrence had elected the island’s first female constable.

And, for the first time, St. Helier’s enlarged harbour meant Britannia did not need to moor in St. Aubin’s Bay as it had on two earlier visits but could sail directly into what was the newly created Elizabeth Marina.

That evening, 42 guests were invited to dine aboard the ship, and a further 200 later attended a drinks reception.

Prominently on show aboard the yacht was the silver milk can adorned with the parish crests that the island had given to the young Queen when she had made her first visit as Queen back in 1957.

For almost an hour, starting at 22:20, fireworks lit up St. Aubin’s Bay, although there was a pause at 23:10 during which the Band of the Royal Marines beat retreat on the pier whilst the guests looked on from the deck of Britannia. 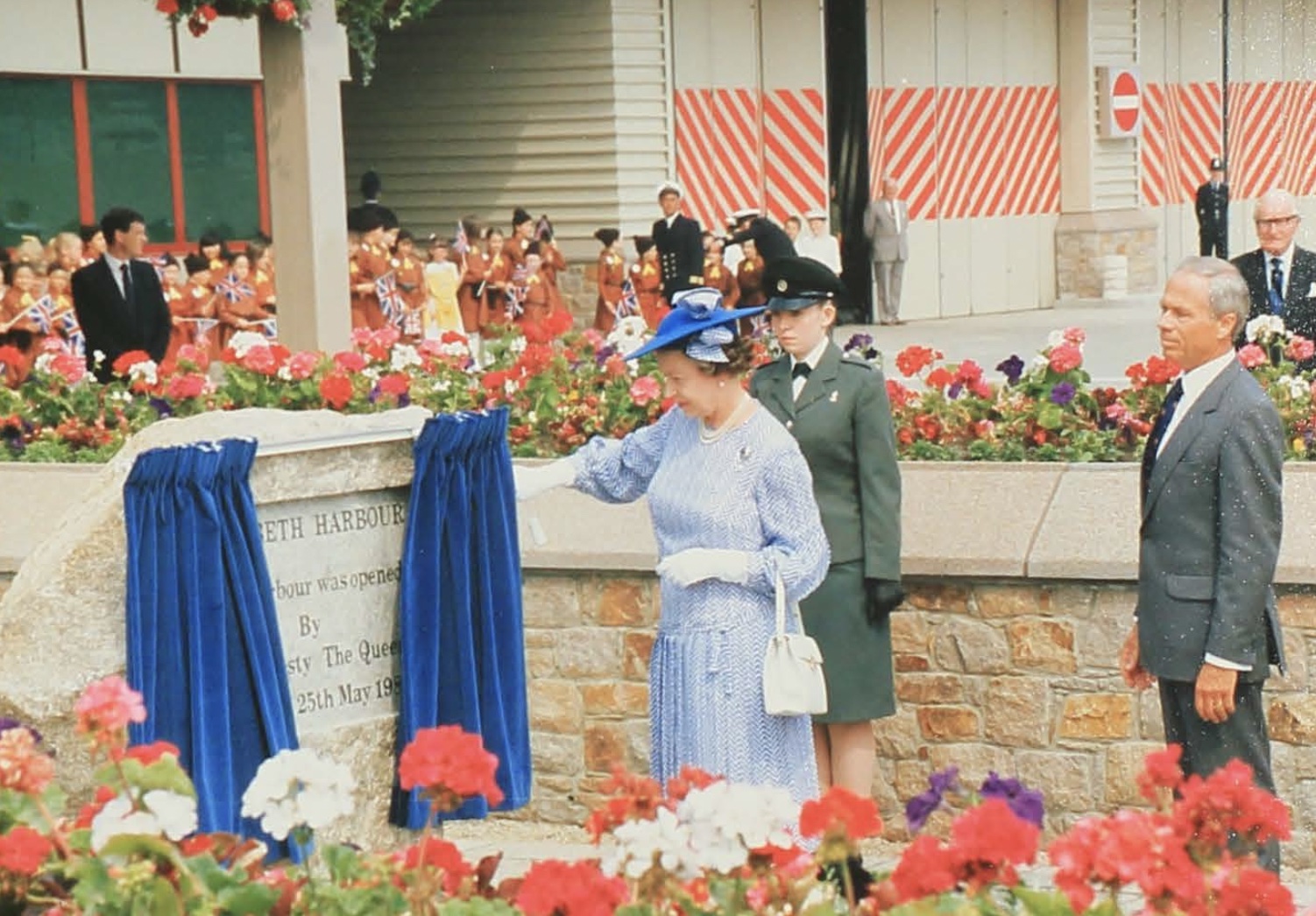 The following day, on Thursday 25 May at 10:00, the Queen stepped ashore and shortly afterwards performed her first official duty: opening the new harbour terminal. Six-year-old Caroline Gray, whose father worked at the harbour, had the honour of presenting the Queen with her first bouquet of the visit.

As on previous occasions there was a special States Assembly sitting, during which the fifth Bailiff of the Queen’s reign, Sir Peter Crill, read out the Loyal Address.

A birthday to remember 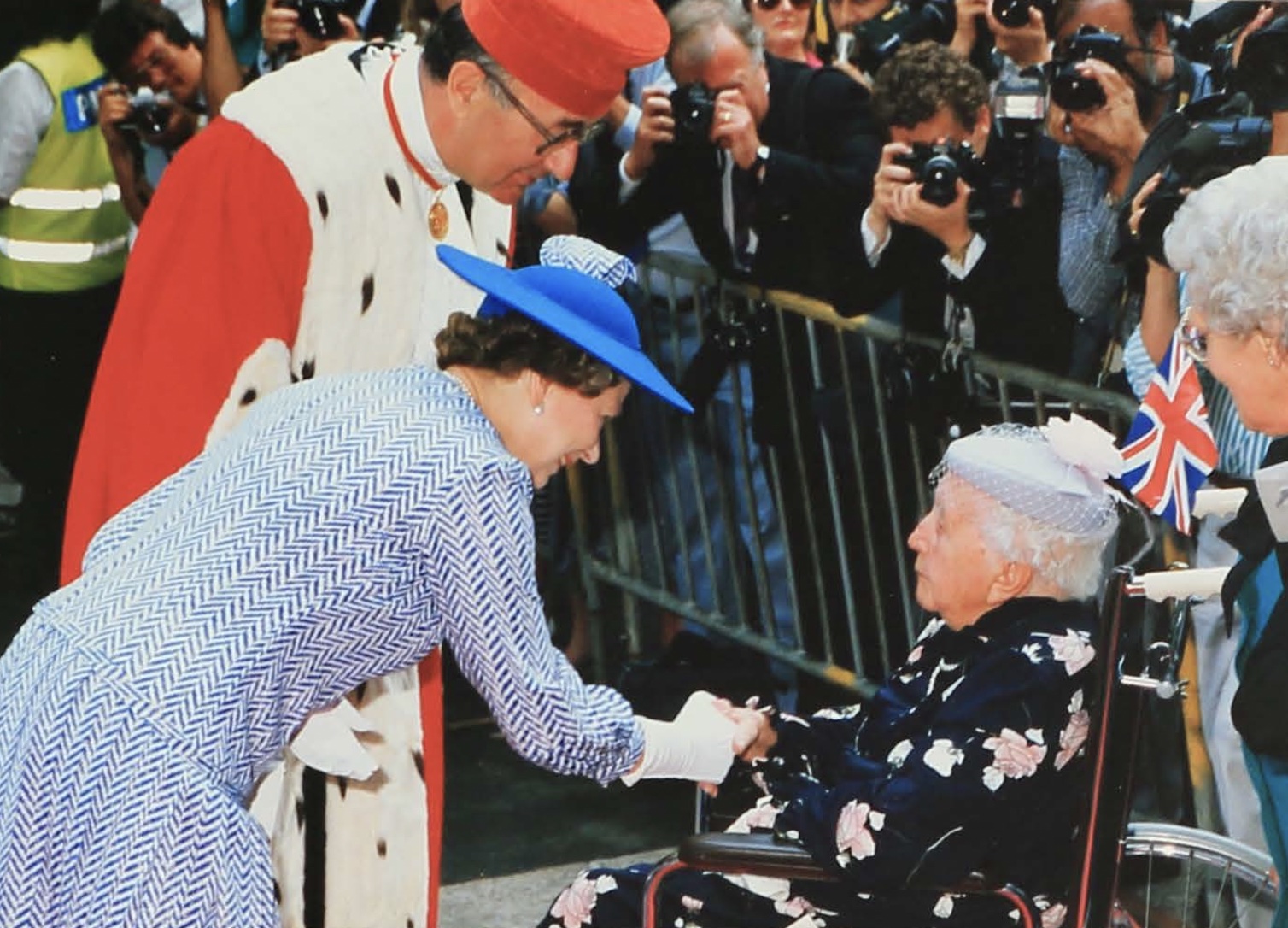 But, unlike on earlier occasions, this was followed by a more relaxed atmosphere as the Queen went on a ‘walkabout’ in the Royal Square, posing for photographs and chatting to many of the islanders who had been waiting patiently for hours to catch a glimpse of the monarch.

Amongst those presented to the Queen was Lilian Le Couteur who was celebrating her 100th birthday.

Eavesdropping on storytime at the new Library 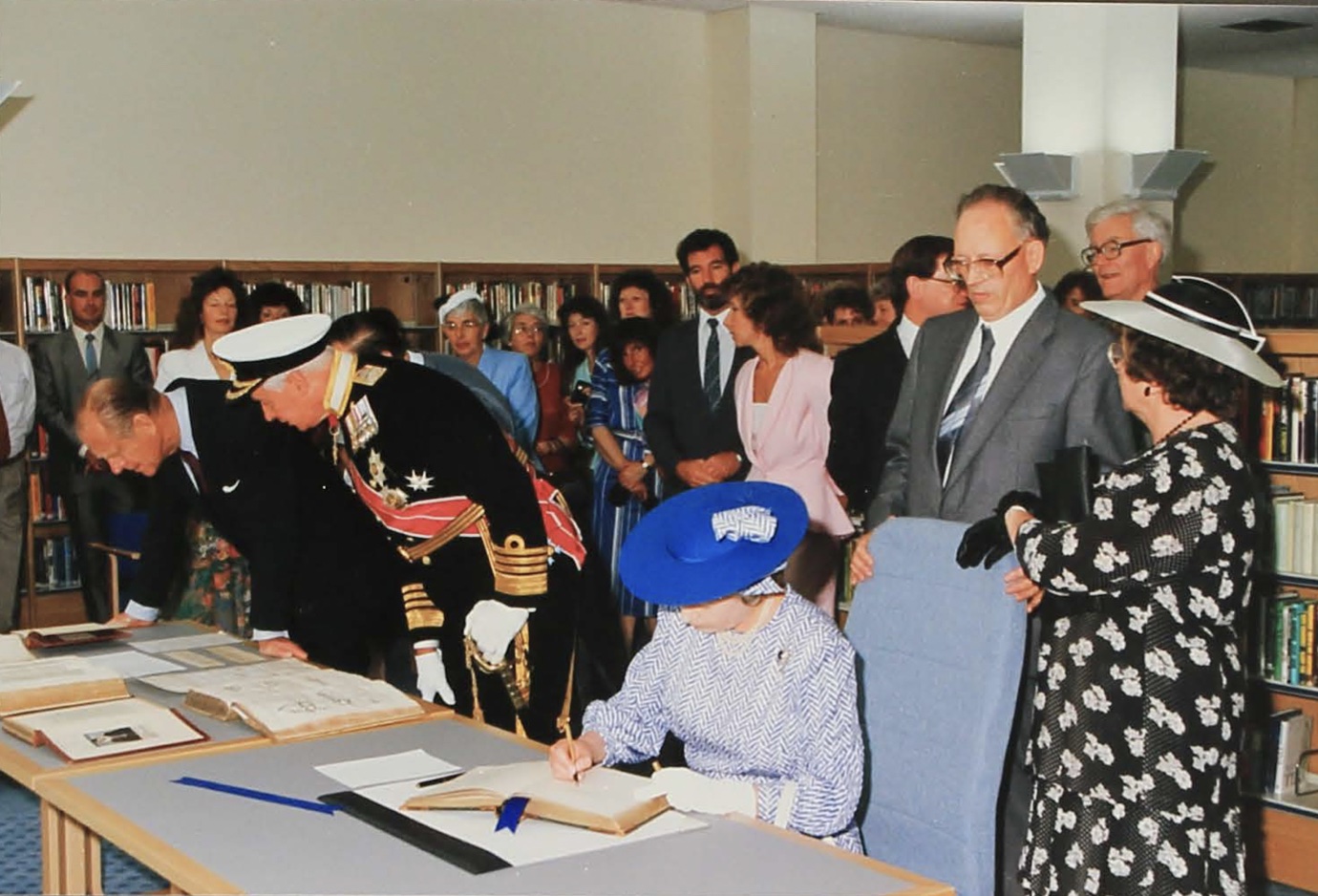 Pictured: The Queen signing the visitor book at Jersey Library, shortly after opening it. (Jersey Heritage)

The informal atmosphere continued as a waving Queen travelled, against the usual flow of traffic, in an open horse-drawn carriage the short distance from the Royal Square to the new library in Halkett Place.

After officially opening the building, she eavesdropped on storytime for youngsters.

A member of staff was reading the Smallest Teddy Bear in the World, to a group of children including brother and sister, five and three-year-old, Selina and Brian Constantine.

The Homage of the Seigneurs was also lightened up and made more accessible by being held in the grounds of Gorey Castle rather than in the dark Royal Court building. 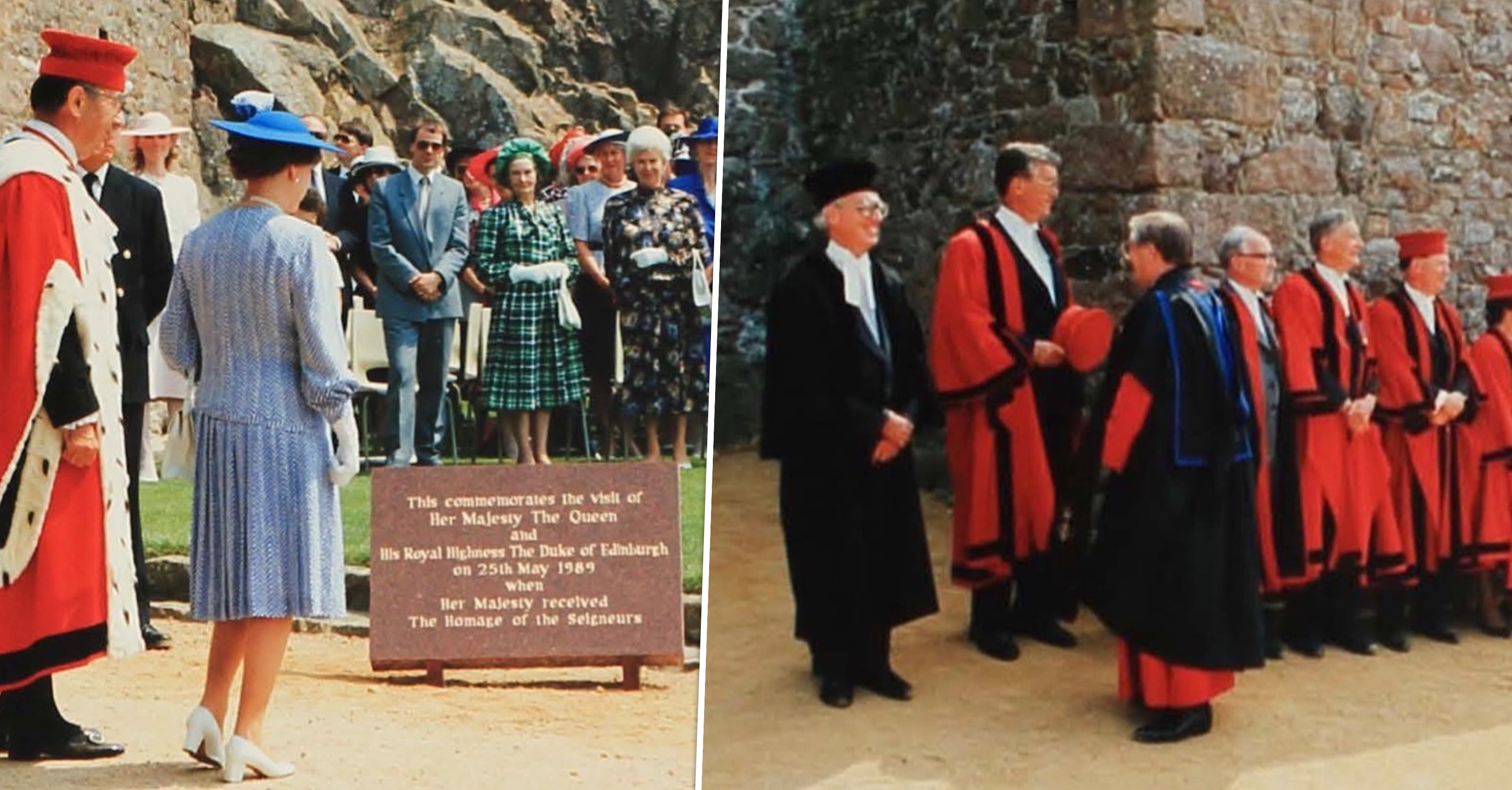 Pictured: The homage of the Seigneurs took place at Gorey Castle. (Jersey Heritage)

But, as tradition dictates, as part of the ceremony the Seigneur of Trinity, Major John Riley, still had to present the monarch with two dead mallards on a silver salver.

A personal visit to a charity champ 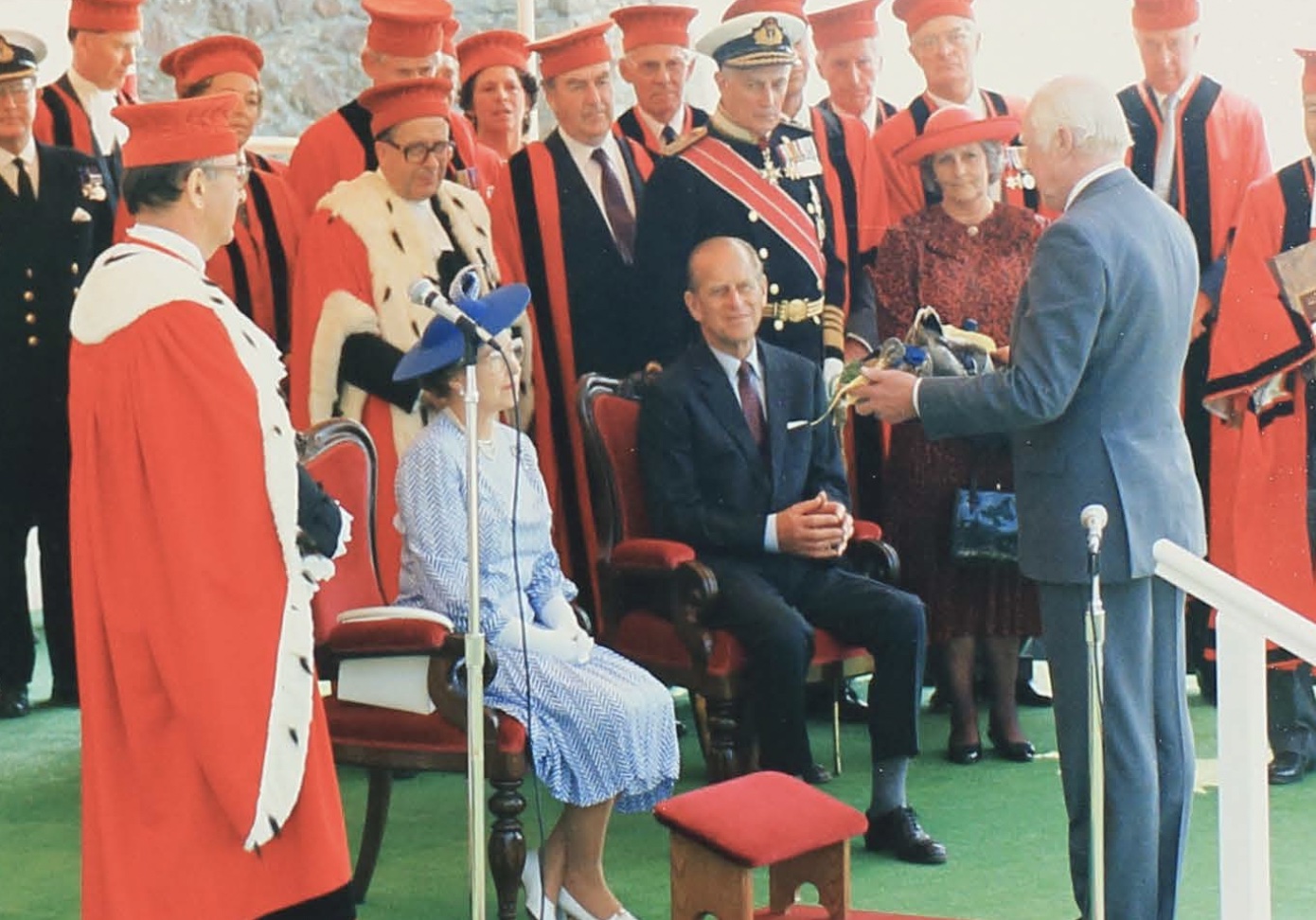 Pictured: The presentation of dead mallards on a silver salver to Her Majesty. (Jersey Heritage)

As further evidence of the monarchy’s new approach, the Queen’s ‘common touch’, and a move away from just acknowledging the great and the good, just before lunch the Queen popped into the home of Malcolm Gray in Gorey Village for a private 10-minute visit.

Malcolm, a former BBC Radio Jersey presenter, had been a well-known charity worker who in 1987 had suffered a massive stroke.

Then, under the watchful eyes of owners Colin and Robert Jones, more than 200 guests, and a further 100 members of the press and security guards in a separate room, the Queen attended a special luncheon at Jersey Potteries in Gorey Village.

A smoked salmon starter, was followed by lobster with local vegetables and Jersey Royal potatoes, then a fresh fruit salad, and Friendies pastries. The meal was served with Clos de la Mare, a local white wine from La Mare Vineyards.

Afterwards the Queen was presented with a silver gilt copy of the Royal Mace which had been made by local craftsman Richard Blampied of Aurum Jewellers. 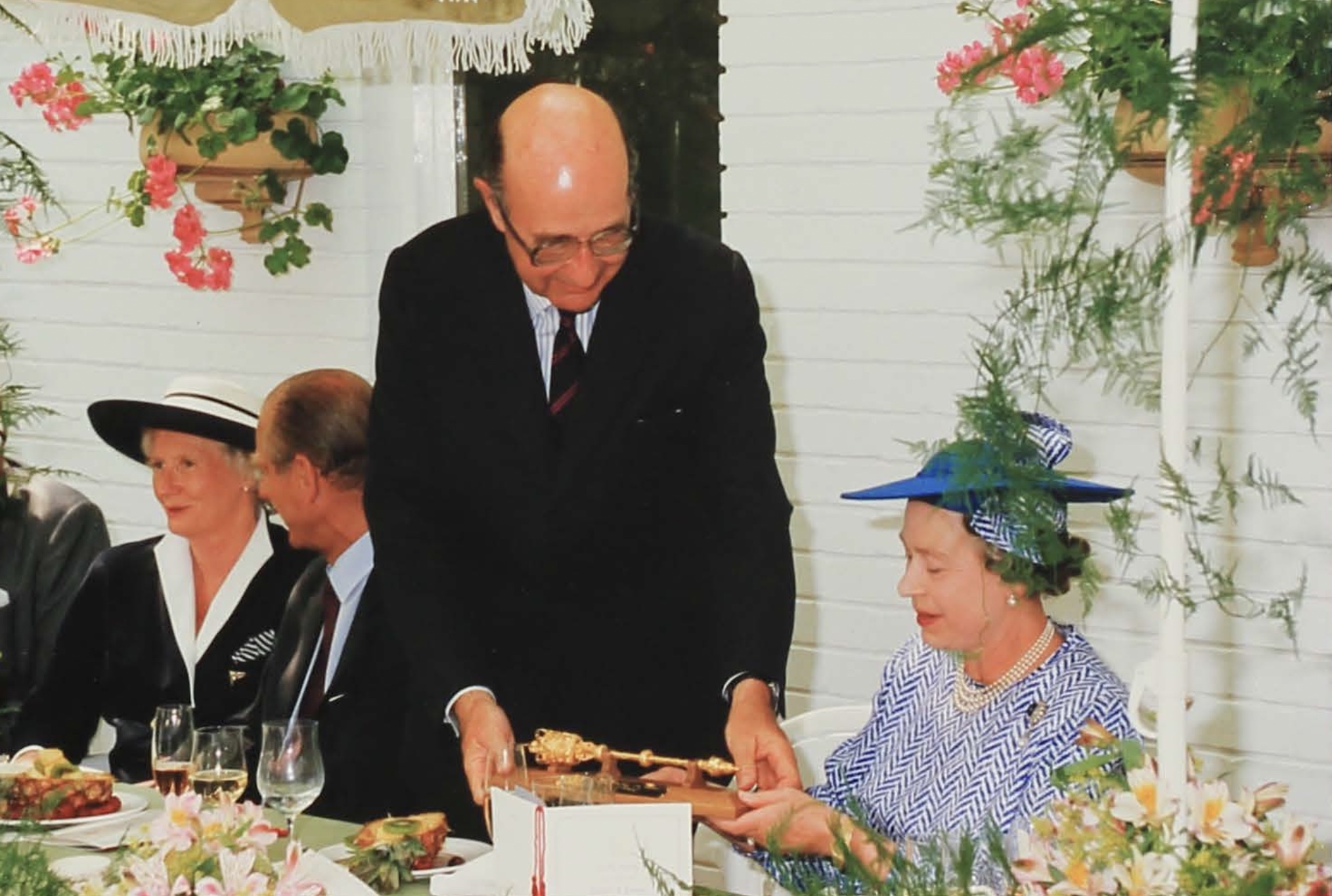 Pictured: The Queen being presented with a replica of the Royal Mace.

As with previous visits a special agricultural show was put on for the Queen to visit, this time at Howard Davis Farm, and again she was given a cow to add to her herd at Windsor.

Among those in the crowd was a young Pam Robson, a primary school pupil who was getting into photography. 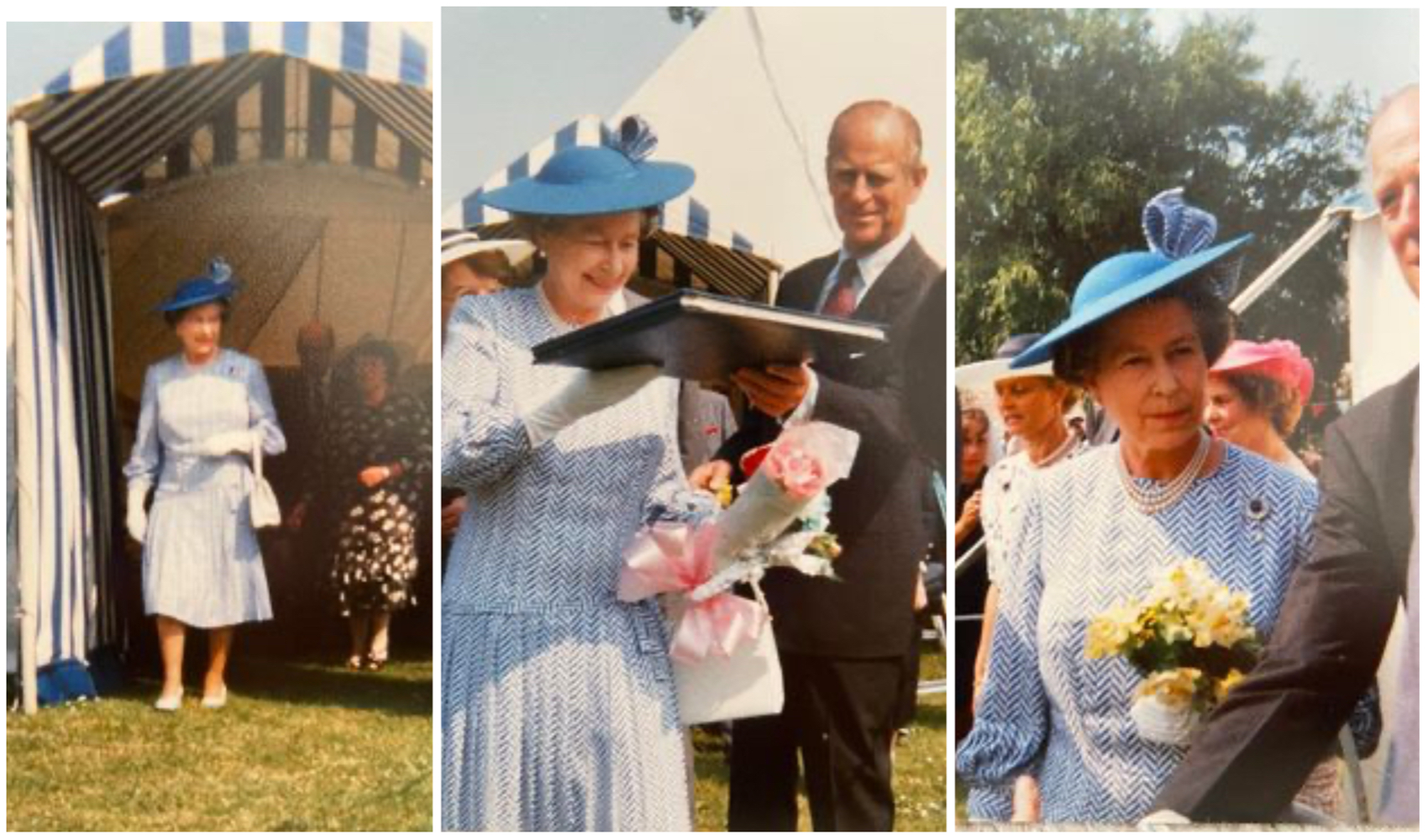 "I was there with my little camera. I must have pushed right to the front and, for a nine-year-old, got some decent pics!" she told Express.

Congratulations on your quallies, Bergerac 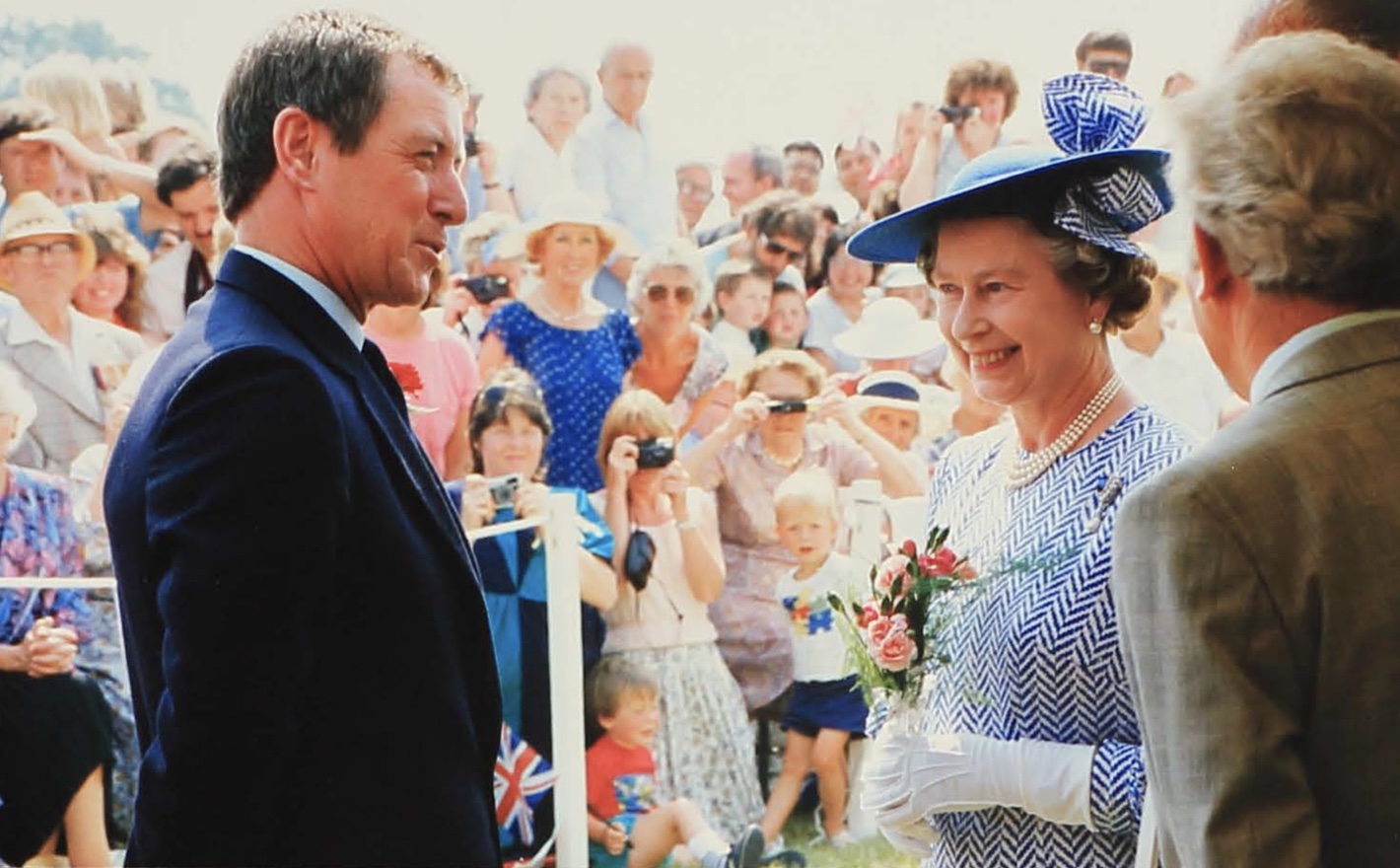 But, in the 1980s it was arguably not a cow that was the face of Jersey so much as fictional TV detective Jim Bergerac, actor John Nettles.

He was also in attendance at the show, and, no doubt briefed by savvy advisers, the Queen congratulated him on getting his ‘quallies’.

A visit to Victoria College was also once again on the Royal list of duties. It was the first time in 144 years the Queen’s Awards had been given by a reigning monarch.

Flying in from Hong Kong for a special ceremony 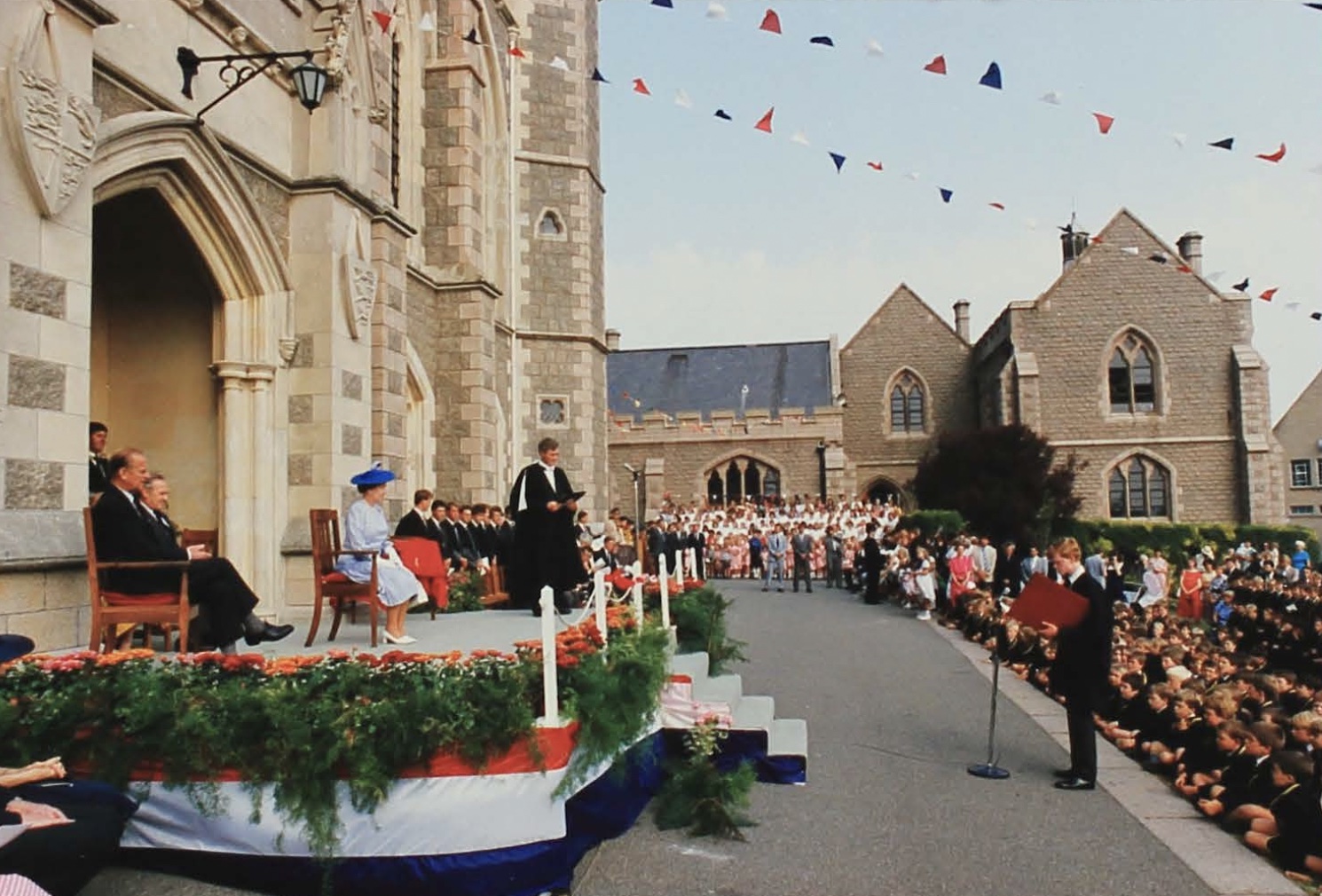 2,000 pupils and guests heard Michael Hedditch read out the Loyal Address and cheered when the Queen announced she had asked the headmaster to grant the school an extra day’s holiday. 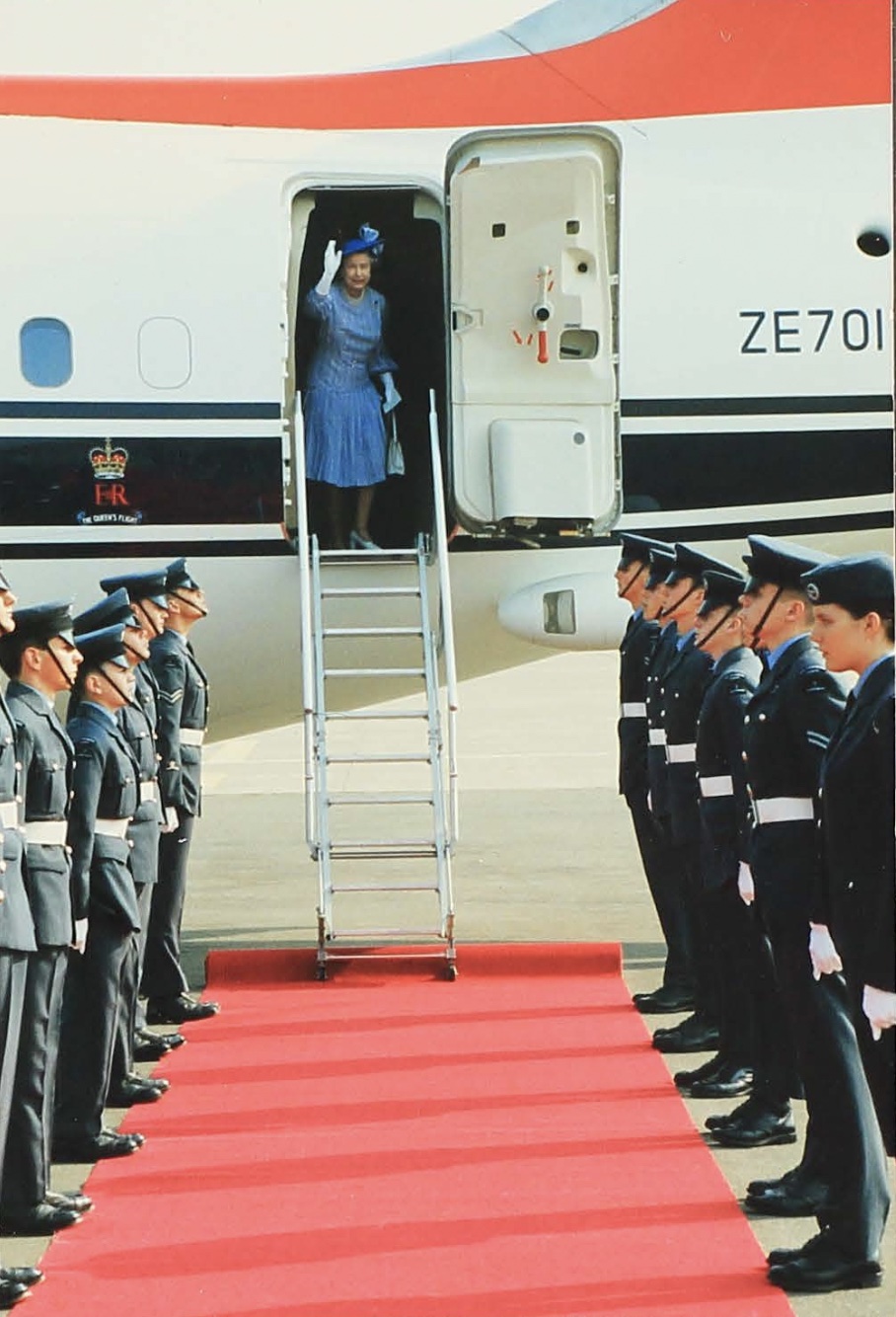 Pictured: Shortly before the Royal flight took off.

Just after 16:00, the couple left the college for the Airport where thirty minutes later the Royal Flight took off.

Express will be releasing a Special Digital Edition celebrating the life of the Queen and her connection to Jersey on the day of Her Majesty's State Funeral on Monday 19 September.