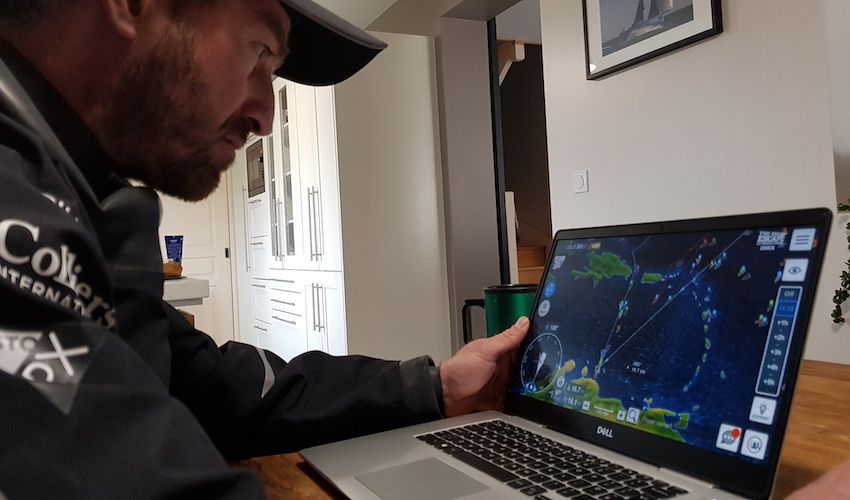 While outdoor activities have been restricted across the world in response to the virus crisis, a Jersey sailing champion has been competing in a transatlantic race.

But Phil Sharp hasn't had to take to the sea for it, and is instead competing virtually.

The Jersey-born competitor was prepping for his Figaro racing season when France, where he lives with his family, went into lockdown three weeks ago.

The sailor therefore had to give up his “productive” routine – which included three gym sessions per week, consisting of cardio and weights sessions combined – and find new ways to train from home, with little equipment.

Video: Phil was in the middle of an offshore training session in Biscay when the French lock-in started.

Unable to get some free weights – he was in the middle of an offshore training session in Biscay when the French lock-in started and he had no chance to get to a Decathlon - Phil has discovered the “potential” of bodyweight exercises, which he had never really gotten into before, aside from pull-ups and press-ups.

“They can be nearly just as effective for developing strength and boosting muscle development as when using weights, but can also really help towards cardio fitness and boosting aerobic capacity,” Phil said. 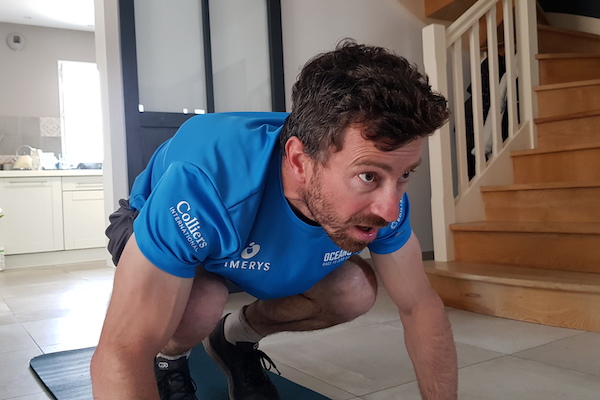 Pictured: Phil says the burpee is "a killer bodyweight exercise that uses a whole range of muscles".

“A killer bodyweight exercise that uses a whole range of muscles is the burpee. Try doing three sets of 20 burpees and it leaves you practically unable to stand. A seriously effective exercise that can be done almost anywhere.”

“I have organised myself some bodyweight circuits where I typically combine burpees with press-ups, squats, side planks and bench dips; but there are a whole host of others. It is amazing what you can do with your own weight and aerobically they seem to push you more than lifting steel in the gym.” 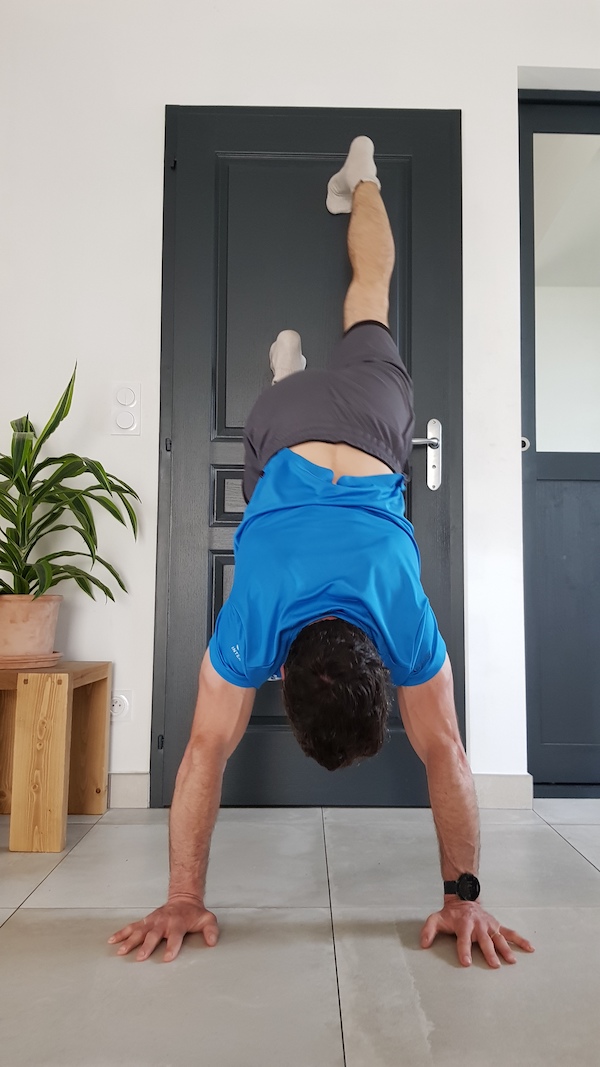 Pictured: Phil has had to get creative to train during lockdown.

In addition to his bodyweight exercises, Phil has been running and cycling, although he has also had to adapt for the latter, as, in France, people can only go within 1 km of their house.

Much to the “annoyance” of his wife, Bex, Phil has taken advantage of her turbo trainer - a static resistance platform which provide the same resistance and feeling as a moving bike -  to virtually take off to the Dolomites or the Pyrenees. 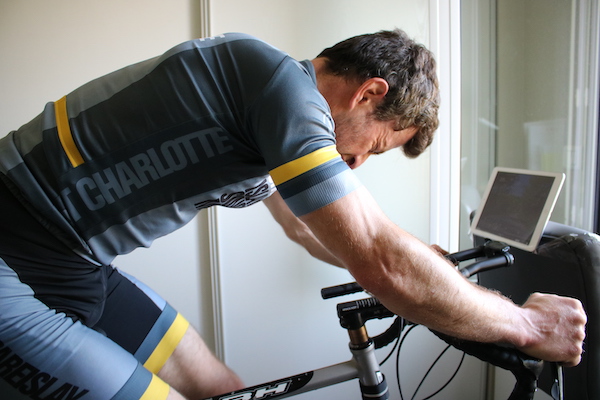 Pictured: Phil has turned to a turbo trainer to get his cycling-fix.

“I haven’t used them before but it is actually really surprising how much you end up pushing yourself, particularly when you have a virtual competitor ahead of you that you naturally want to hunt down and overtake,” Phil said.

“You also have a constant power output reference so you know how much you are pushing, which you don’t have when cycling outdoors.”

Overall, Phil says the change in routine – which involves slightly more cardio than usual, and perhaps slightly less strength training - has been rewarding.

“Rather than continuing my same gym routine, it has really forced me to open my eyes to new exercises and develop a better structure for my training,” he explained. 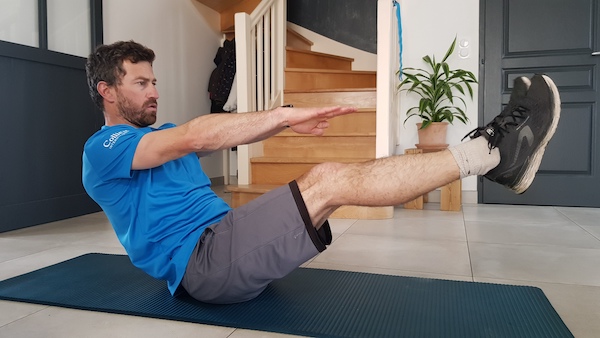 Pictured: Phil says the change of routine the lockdown has brought has been rewarding.

“I have effectively replaced my indoor rowing sessions with indoor cycling, as well as doing more running, and this gives me more variation on my cardio sessions than on gym machines.

“I have a massive choice of routes on the turbo-trainer and inevitably this variation makes me look forward to my workouts more. That said, I am starting to miss the outdoor biking sessions and the wind in my face!”

Over the last few weeks, technology has also played a big part for Phil, who is part of a training group with other solo offshore sailors. They have started online training group chats and webinars in place of land-based classroom sessions. 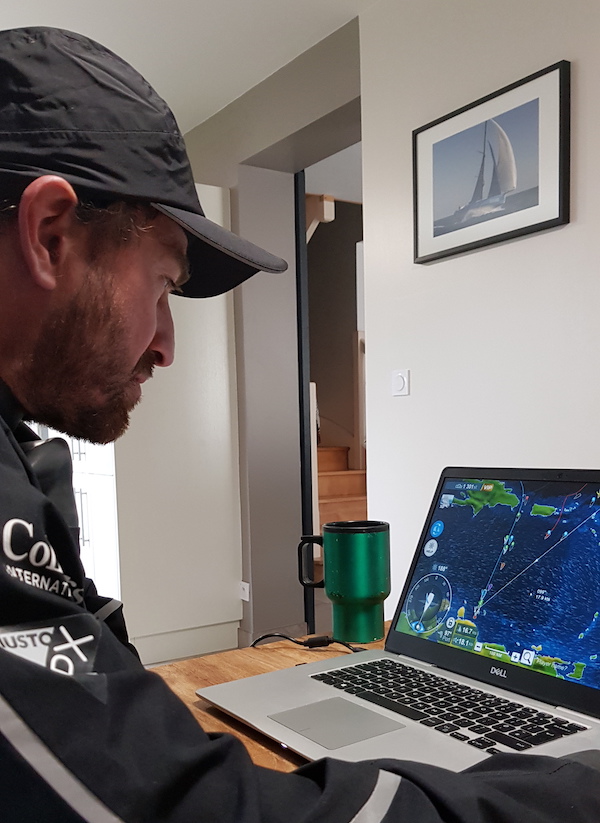 Pictured: Phil was waking up several times at night to change course during The Great Escape.

On Monday, they had a group Skype to talk about boat tuning and sail trim, and we have online training on weather, race strategy and navigation software.

“This period is an ideal opportunity to learn theory and formulate objectives whilst all nautical activities are banned until early May,” Phil said.

Learning helps us advance and move forward, and I find that too often there is never enough time to do structured learning.”

In addition, Phil sailed virtually in a transatlantic race called The Great Escape along with 140,00 competitors, even waking up several times at night to change course.

Time for a dry Transat this time from the confinement of an armchair... #TheGreatEscape has begun!
Racing in IMOCA60 aboard #OceansLab ????????

Luckily, his efforts paid off and he crossed the finish line ahead of one of the favourites for the next Vendée Globe.

“This enormous virtual race was organised to bring sailors together in this time of isolation,” he explained.

“Although I am racing a virtual boat, it uses real-time weather forecasts in the Atlantic and simulates your boat speed according to the conditions, so it is great training for my offshore strategy and weather routing.

“I have also been competing against some of my rivals from offshore racing, which has been fun and ultra-competitive.”

Last boat into La Rochelle before full french lock-down. A surreal return to a motionless port and empty streets... pic.twitter.com/Ht2sj0Ep6Z

Reflecting on this “period of isolation”, Phil said it has been “very liberating” as it has given him more free time.

“Time is a freedom and something we don’t normally have much of, so it is a perfect opportunity to take a step back and develop future projects and objectives,” he said.

“Being creative, staying active, and continuing a healthy lifestyle above helps me stay positive in this challenging period.”

Are you a sports star who has had to change their training routine? Or do you know one? Get in touch! Email editor@bailiwickexpress.com