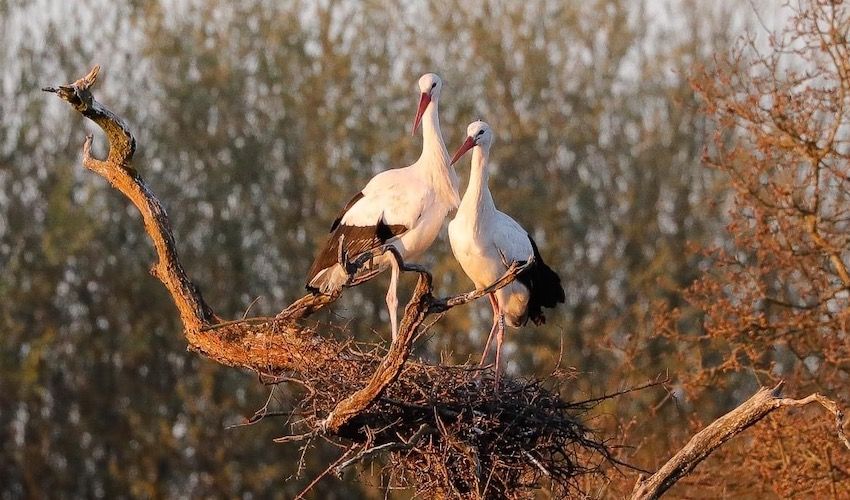 A Jersey Zoo project to bring white storks back to the UK has hatched success after a clutch of the endangered bird have been born on British soil for the first time since the Civil War.

Durrell has been working as a key partner in the White Stork Project, alongside many other conservation organisations and private landowners, to see a successful stork nest bring forth a clutch of chicks.

Once native to the England, the white storks have been driven away over the years – until this drive to restore a natural population to the UK. The project hopes to support 50 breeding pairs to nest in southern England by 2030 through a phased released programme over five years.

One breeding pair which has been nesting on top of an oak tree on Knepp Estate in West Sussex have now been seen regurgitating food for their chicks to eat. 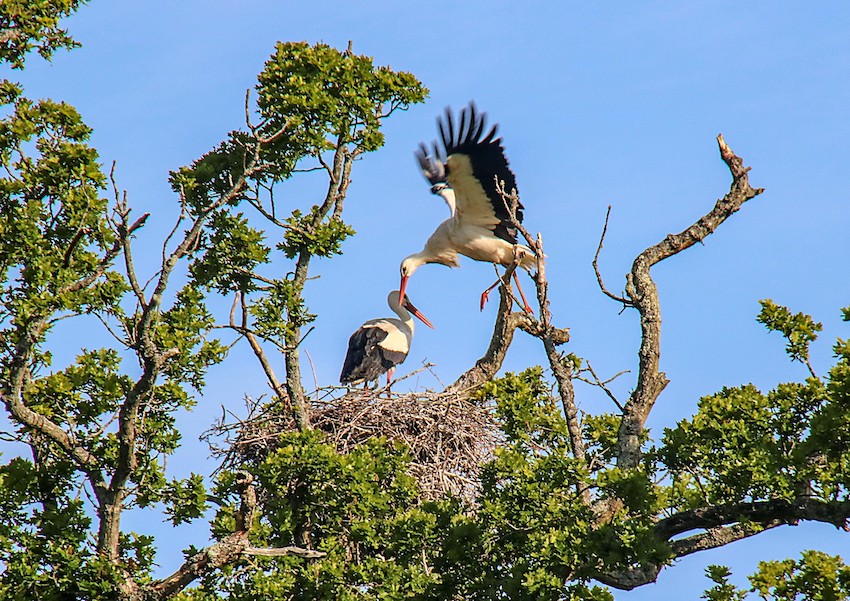 Pictured: The storks have been nesting atop an oak tree in Sussex (B Albrecht).

It was confirmed in early April that there were five eggs in the nest, and in the following weeks, the birds were regularly observed taking great care to incubate the eggs.

It’s thought that the parents are the same birds that tried and failed to breed at Knepp last year.

Durrell Wildlife Conservation Trust coordinates the project and provides post-release monitoring expertise, as well as working with the local communities at the release sites.

Lucy Groves, Project Officer for Durrell, commented: “After waiting 33 days for these eggs to hatch, it was extremely exciting to see signs that the first egg had hatched on 6th May. The parents have been working hard and are doing a fantastic job, especially after their failed attempt last year. It is incredible to have the first white stork chicks hatch in the wild for hundreds of years here at Knepp.

“These are early days for the chicks, and we will be monitoring them closely, but we have great hopes for them. This is just one step towards establishing this species in the South of England. It may be a small step, but it is an exciting one. This stunning species has really captured people’s imagination, and it has been great following the sightings of birds from the project during the period of lockdown and hearing about the joy and hope they have brought to people.” 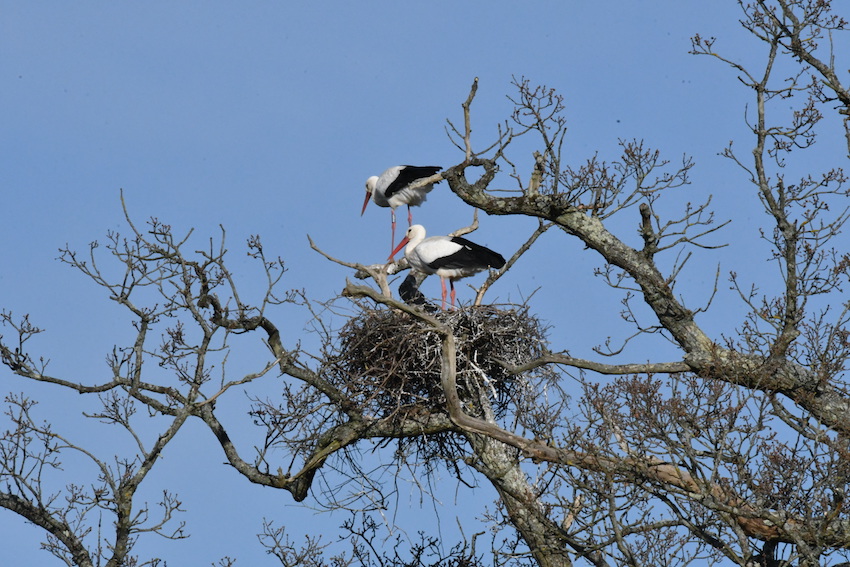 Pictured: It's thought that storks haven't bred in Britain since the Civil War (C Burrell).

It comes as the zoo has reopened to its members after being closed to the public during the lockdown.

Meanwhile, in an effort to support the conservation charity whilst its doors were closed, two Durrell volunteers have raised £8,500 for the zoo by making and selling patterned fabric face masks outside of their homes.

Karen has raised over £2,100 so far, and along with a team of 20 other Durrell volunteers has made 260 animal-themed face masks for the staff at Jersey Zoo who are required to wear them as a safety measure to protect the animals from covid-19. 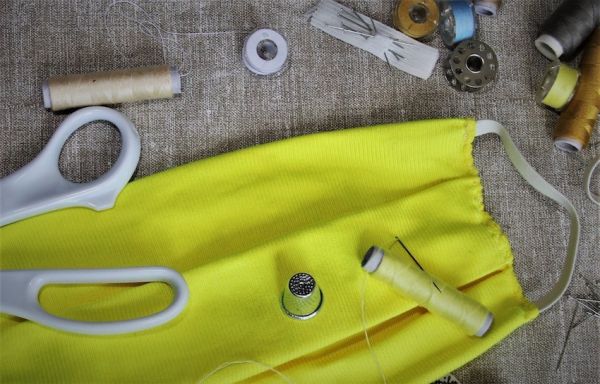 Pictured: Durrell volunteers have been hard at work making and selling fabric masks.

Volunteers continue to make masks, which are available at the zoo for a donation of £5, and Karen’s masks can be purchased from a box on Ruette Gabard at the top of Gouray Hill.

Since the beginning of March, Sarah Nugent has been making and selling face masks using materials that were donated to the Durrell Charity Shop. So far, Sarah has made approximately 1,500 masks and raised £6,400 for Durrell’s ‘Cans for Corridors’ project, which raises funds to plant trees in the Atlantic Forest of Brazil. Sarah’s face masks can be purchased from a roadside stall on Rue de la Garenne, Trinity, near Rondels Farm Shop.

Commenting on her efforts, Sarah said: “I am amazed at how much money I have managed to raise through selling face masks. I never in my wildest dreams thought I could raise this much. The lane outside my house has been a popular exercise route during the lockdown, which has really helped sales. During the beautiful weather, I was outside in the garden speaking to customers about the Cans for Corridors project. The sign next to my stall tells people how many trees we have been able to plant with the amount of money raised. I have been updating it every day and passers-by have enjoyed watching the rainforest grow – we have now reached 12,000!”