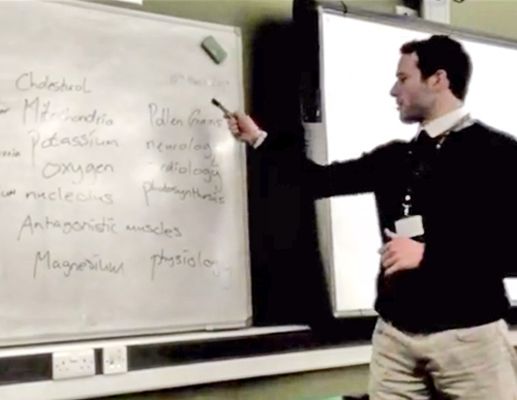 A Jersey poet has been rapping his way through Biology at a school in East London and his lessons have been going viral.

Christian Foley, a former Victoria College student, has made headlines after coming up with a cool science rap to inspire teenagers at the school.

The 24-year-old, who is working as the poet in residence at Cardinal Pole School in Hackney, rhymed his way through the science lesson after being set a challenge by the Year 8 students.

Posting this clip online, he said: “Ever wondered what the day job of a rap teacher is like? Here is a science freestyle challenge set by my year 8’s.”

Christian is one of a number of poets who are working in secondary schools in London as part of  'Spoken Word Education' - a scheme that aims to improve children's academic and emotional literacy and aid their self-expression.

Christian said: "My poetry classes are student centred, it is all about their voice rather than mine. That said, I do rap for the children as a way to engage with any kind of topic, from Shakespeare to Dickens.

"The improvised nature of my performances is what catches the most attentio. Students can never understand how I do it, like a magic trick that they can't work out. Neither can I.

"Work like this is so crucial in keeping creativity in school, in an educational environment with increased focus on assessment levels and standardised testing - we are fighting the good fight to keep children engaged in their learning, to cherish and enjoy it."

Christian plans to work with a number of schools here in the Island and is already well known on the Jersey Arts scene having had support from both the Jersey Arts Trust and the One Foundation. Last year he performed as part of the Bedell Creative Arts programme and at the Opera House during the Festival of Words.

Jersey Arts Trust Director Tom Dingle said: "We first met Christian through our Inter-School Poetry Slams in 2008/9 and were instantly struck by his huge potential and ability. Since then it has been our pleasure to work with him on our Bedell Creative Arts Programme and offer small amounts of support in his on-going development as an Artist, along with the One Foundation.

"The science class video is just a small taster of Christian's rapping prowess - his work in schools generally is truly inspiring, as is his growing recognition as being one of the most promising young spoken work Artists in the UK."

Christian will be performing on the main stage at the Reasons Festival on 30 July and will be back again for this year's Festival of Words in October and if you want to see more of his work, you can check out his new album here.