'The Voice' singer to join Hoedown 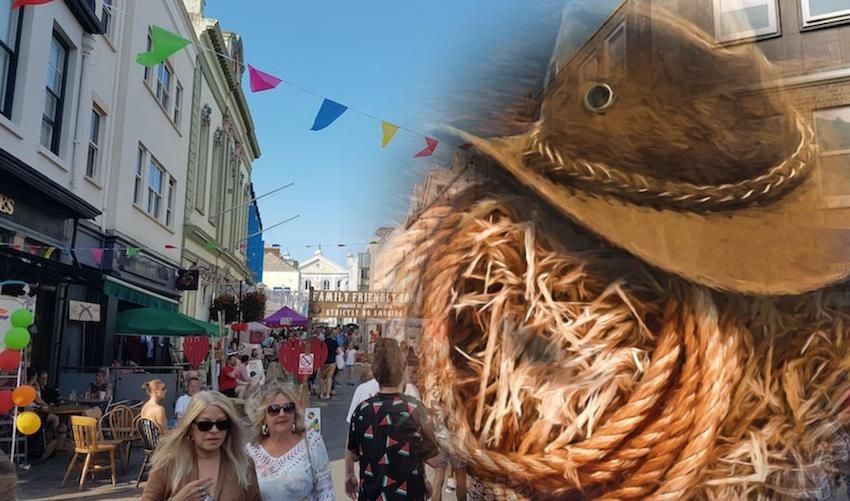 'The Voice' singer to join Hoedown

Whack out your denim, leather belts, hats, and cowboy boots: the Halkett Hoedown is back, with a country singer who appeared on TV's 'The Voice' joining the bill.

Thousands of people of all ages are expected to descend on Halkett Place on 25 August for the event.

The inaugural Hoedown took place in 2014, followed by bigger events in 2015 and 2017. Over the years, the Hoedown has donated over £60,000 to various local charities including Headway Jersey, Brightly Jersey, The British Heart Foundation Jersey, Mencap Jersey, The Jersey Alzheimers Association and Acorn Enterprises.

This year, parts of the proceeds will be donated to Macmillan Cancer Support Jersey, which has just opened a new café and second-hand book shop, ‘The Lounge' in St. Helier.

Once again, Halkett Place will be closed to traffic and town will meet country, with straw bales and Western-themed decorations, live music, food stalls and bars.

Volunteers will build and decorate jails, stores, stocks, bars and signs to set the western scene perfectly. Wild West fancy dress will be the order of the day and entry will be by donation, except for those under 16.

Upbeat live music will be performed all day and into the night with Country, Americana, Folk and Blues being the main themes. Among the performers will be local musician Frankie Davies.

Video: 'High on Love' was the first single from Frankie Davies' new album.

The Jersey-born country singer is returning from her home in Cornwall to perform in Jersey for the first time since the release of her debut Album 'Wherever I Go’ last year.

Country performer Peter Donegan, who appeared in 'The Voice' earlier this year, will be bringing his full five-piece band to the stage of the hoedown.

Having hit a huge note on the ITV show, the audience roared with approval and Sir Tom hit the red button there and then.

Five-piece outfit Treetop Flyers - winners of the Glastonbury Festival emerging talent competition in 2011 - will also grace the crowds with their "blissful" blend of soulful Americana and Country Rock.

Pictured: One of the Hoedown organisers' favourite songs from Treetop Flyers.

The Hoedown's 50/50 raffle - where proceeds collected are paid out half to the winner and half to charity - proved very popular at the last Hoedown, and is back for another year.

For those still do-si-down for a party at the end of the event, there will be an after-party at Rojo night club featuring some of the performers from The Hoedown.

Jessie J to 'do it like a dude' in Jersey

Heather Brown, RampArts: Five things I would change about Jersey