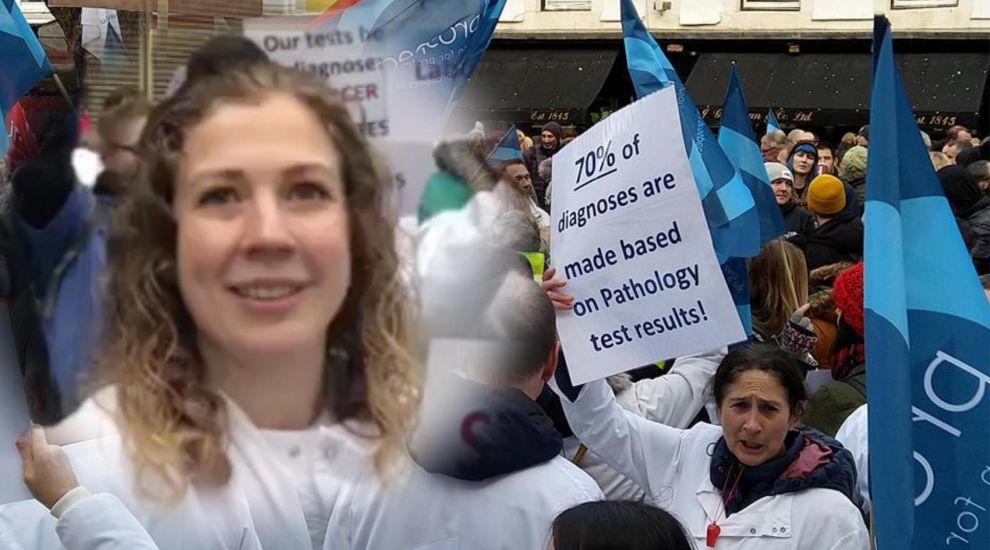 A biomedical scientist has said she hopes the strikes today will make the government realise that many medical workers are categorised as ‘civil servants’, which “the hospital couldn’t run without”.

The comments from Becky Touzel came as she joined hospital staff picketing the hospital building in protest at the States’ proposed pay rises offer of 1% in 2018 and 2019 for civil servants.

She said that workers felt the States had been trying to “undermine” their argument, but were nonetheless encouraged by the support from members of the public who honked, waved and cheered as they passed the crowds.

“I think they’re now starting to realise all the diverse roles that civil servants play,” she said.

Cyril Le Marquand House was also surrounded by workers protesting the deal as part of industrial action led by unions JCSA Prospect and Unite the Union.

Mick Robbins, Vice President of JCSA Prospect, told Express that the hundreds of workers that had chosen to take the day off showed the strength of feeling.

“The turnout is really encouraging. This is costing people money. This is really acting on people’s wages because they’re losing a day’s pay but it shows how strongly they feel.”

The groups picketing Cyril Le Marquand and the Hospital have now gathered in the Royal Square, many of whom waving flags and chanting outside the States Assembly building where politicians are currently sitting.

JCSA Prospect General Secretary Mike Clancy then addressed the crowds in a speech, as did Senator Sam Mézec, Chairman of Reform Jersey.

Video: Picketers march from the hospital to the Royal Square.

He thanked the crowds for "standing up for the public services that every single person on our island absolutely relies and depends upon".

The Senator continued by referring to a proposal to change the States' Finance Law in order to release £51million of funding for wage increases in line with rises in the cost of living by fellow Reform politician, Deputy Geoff Southern. The reference drew 'boos' from the crowd when he mentioned that the idea had been rejected by a single vote.

In his parting words, he said he was "sure that at the end of this, Jersey will find itself in a much better position".

Unite the Union Leader Nick Corbel also addressed the striking workers, criticising the States for failing to award RPI pay rises despite savings due to departmental underspends totalling nearly £30million last year, which he described as an "abundance of riches".

He explained that many States workers were not earning enough to live comfortably, stating that he was aware of a wheelchair-using teaching assistant who said she had little money left at the end of each month to fund her food and living costs.

Mr Corbel added that many States employees were working extra jobs as a result of financial pressures, describing it as a "disgrace that the States of Jersey government allowed this dire situation to develop".

In addition to Senator Mézec, a number of other States Members expressed their support.

In a tweet, Deputy Louise Doublet also said she stood with the protestors.

You have my support - a cost of living increase is a reasonable request. We need to address the huge salaries at the higher end however," she wrote.

I was pleased to have addressed our civil servants who are on strike today. As I said, we need to find a compromise (particularly the SEB) to find a solution. The current situation is not acceptable. pic.twitter.com/tXxbJohYee

Despite today's action, so far the States have not budged with regards to their pay offer, with Chief Executive Charlie Parker maintaining the previously held position that there is "no more money" to fund pay increases in line with inflationary rises.