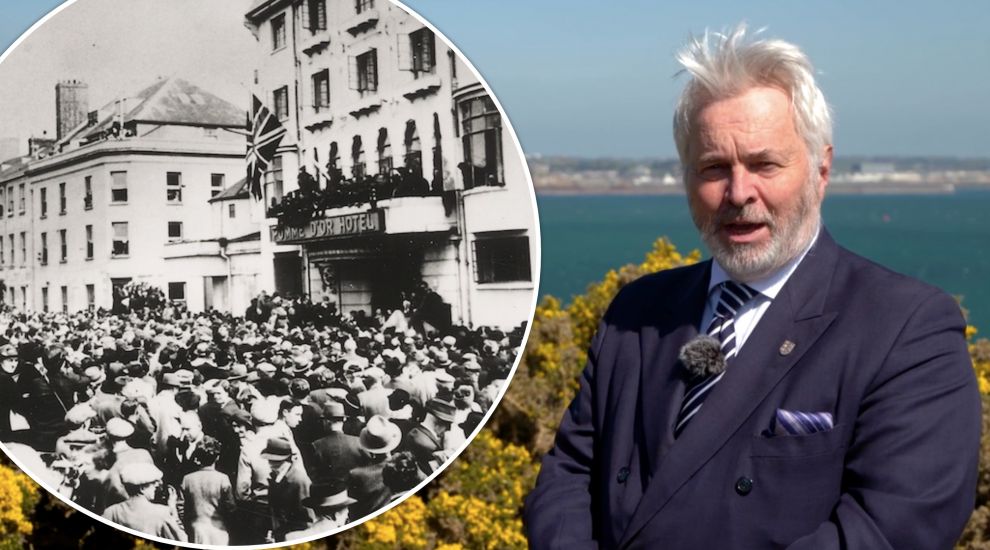 The Bailiff has urged islanders to continue "the values and qualities of duty, service and community" of those who lived through the Occupation in a virtual Liberation Day address.

This year's speech, broadcast on social media, is the second year in a row that celebrations have had to take place virtually, rather than in and around Liberation Square, due to the pandemic.

The Bailiff, Timothy Le Cocq, acknowledged the unusual format of the celebrations in the message he recorded “on a beautiful Jersey spring day” on the headland of Noirmont Point, “the location of some of the strongest fortifications the German occupying forces built” and “an important reminder of the realities of occupation”.

"Behind me, St Aubin’s Bay is the setting of our Liberation," he said, setting the scene. "It saw the formal surrender of the German forces, and provided the landing beaches that allowed Force 135 to arrive bringing with them vital provisions for a community that had experienced great privation."

Video: The Bailiff recorded his address so that all islanders could hear it as the island celebrates its liberation virtually for the second year

"For next year I am optimistic we will be able to have a traditional island celebration, perhaps making up for what we were not able to do for Liberation 75," he added.

"This time last year, covid had been with us for a matter of months. It seems now that, in Jersey, we are on a pathway to reclaiming a far more recognisable life than we have had over the last year or so.

"We have said often, and I make no apologies for saying it again, how much we owe to those who worked so hard throughout to look after us and who continue to do so. Of course, we also look outward, and are much aware that around the world huge challenges remain, some of which may directly impact on our relatives, colleagues and friends."

Video: The Jersey Field Squadron, part of the Royal Monmouthshire Royal Engineers, traced the footsteps of Force 135 for the re-enactment of the Liberation.

He continued: "One of the lessons we have been reminded of over the last months is the importance of community, and perhaps today and in the forthcoming months we may focus on what this day means and can mean to us all, living, as we do, in this culturally rich and multi-faceted community.

"This day celebrates the end of occupation and how important that was for Jersey people at that time. Those experiences and lessons should never be forgotten. We cannot forget the hardship endured, those who lost their lives and, for some, toiled in terrible conditions. We cannot forget the joy of liberation and what it meant for those looking to a future with hope and optimism. All must be remembered."

"But Liberation Day has become more than those things," he went on to say.

"It is our island day, our national day, and it is now and should be about what it is to be ‘Jersey’, to be a part of this vibrant community. A community encompassing all. All those who hold Jersey in their hearts as their home and who feel a sense of commitment to this island.

“What makes this island ‘Jersey’? Whilst nothing and no one is perfect,  there is so much to celebrate and preserve. How should we best celebrate this day in the years to come? I welcome any ideas on the way we may mark even better this Jersey day. A day that must be relevant to all our people of whatever age."

"As I stand in this place, I am inevitably reminded of the important part the armed forces have played in our island story - particularly in the Liberation," the Bailiff said.

"Recently, of course, we lost in the person of His Royal Highness, The Prince Philip, Duke of Edinburgh, a man who exemplified many of the qualities of the wartime generation. He was an interested and welcome visitor to the island and throughout his life he was an ambassador of the armed forces of Her Majesty the Queen.

"Today, Liberation Day 2021, the Jersey Field Squadron, part of the Royal Monmouthshire Royal Engineers, will trace the footsteps of Force 135 [in the re-enactment of the liberation]. Then and now our Armed Forces, which include many of our fellow islanders, continue to serve and for this service we are grateful.

"Liberation 1945 is still a real memory for a number of islanders. Individuals such as Barbara Jouanny, who last year was our Face of Liberation. Barbara, who was in 1945 a young girl, took the opportunity to share her memories."

Concluding, he said: "It is important we preserve these memories and those of others so we can continue the values and qualities of duty, service and community that characterised their generation.

"Please do enjoy this uniquely Jersey day and I hope in twelve months’ time you will be celebrating with me in and around Liberation Square. Thank you."

The Dean, the Very Reverend Michael Keirle, recorded his service of thanksgiving in the Town Church.

Today's 76th anniversary of Liberation is to be marked in a number of other virtual ways.

A special States Assembly meeting was held this morning, which could be viewed online, in which Deputy Carina Alves made a poignant speech about the day and its meaning for the island community.

At 10:30am today, the States Assembly will hold a special meeting to mark the 76th anniversary of Jersey’s Liberation, including a speech by @DeputyAlves.

Liberation Day is also being marked in a number of creative ways, particularly through music and dance.

CLICK HERE to find out the other ways in which the day is being celebrated.