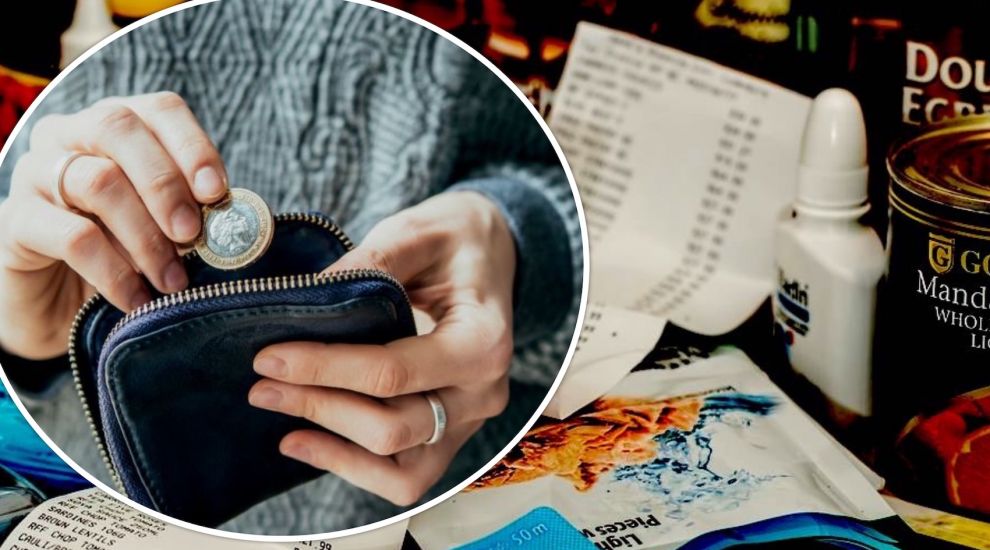 The island has been warned to brace for the highest rise in the cost of living in over a decade.

In a letter to the Treasury Minister yesterday, economists estimated that “inflation is likely to peak at around 5.9% in 2022”, with the squeeze on islanders’ wallets expected to continue for “one to two years”.

But the Russian invasion in Ukraine is expected to increase costs further.

“Russia currently supplies 40% of Europe’s natural gas consumption and 27% of oil imports. Whilst UK and Jersey direct reliance on Russian energy imports is lower, reductions in supply are translating to higher prices globally. Decisions by western governments to reduce their reliance on Russian imports will likely mean higher energy prices will persist for at least the next year,” she said. 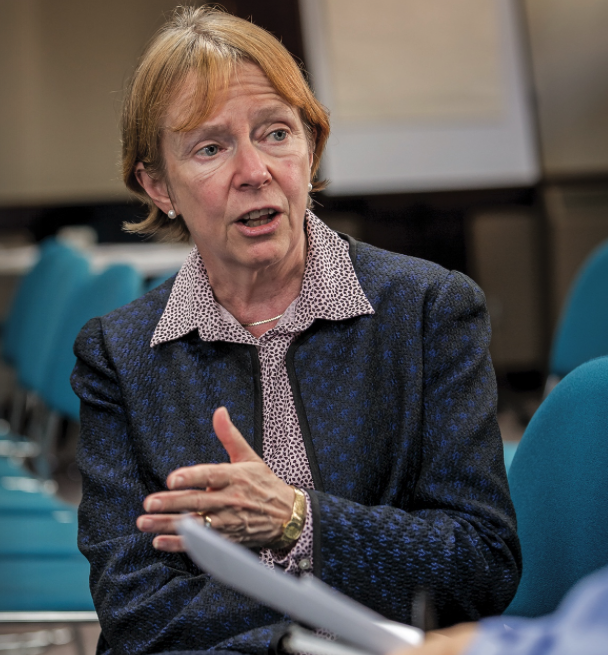 While the island is somewhat buffered by the fact that its electricity is “largely sourced from hydroelectric power and nuclear power, which are less vulnerable to global energy shocks and are subject to long-term pricing agreements”, Dame Kate noted that “the invasion of Ukraine means that oil prices will likely push up the cost of oil and potentially gas heating in Jersey and put upward pressure on electricity prices over 2022, as any long-term contracts expire.”

The warning comes as islanders were already struggling with the costs of food and fuel.

Express revealed last month that food banks had seen a sharp rise in users since the beginning of the pandemic, partially driven by the soaring price of ‘basics’.

The average cost of motor fuel, meanwhile, has rocketed since the beginning of the year. On 29 March, petrol stood at 151.9p per litre, while diesel is 155p. 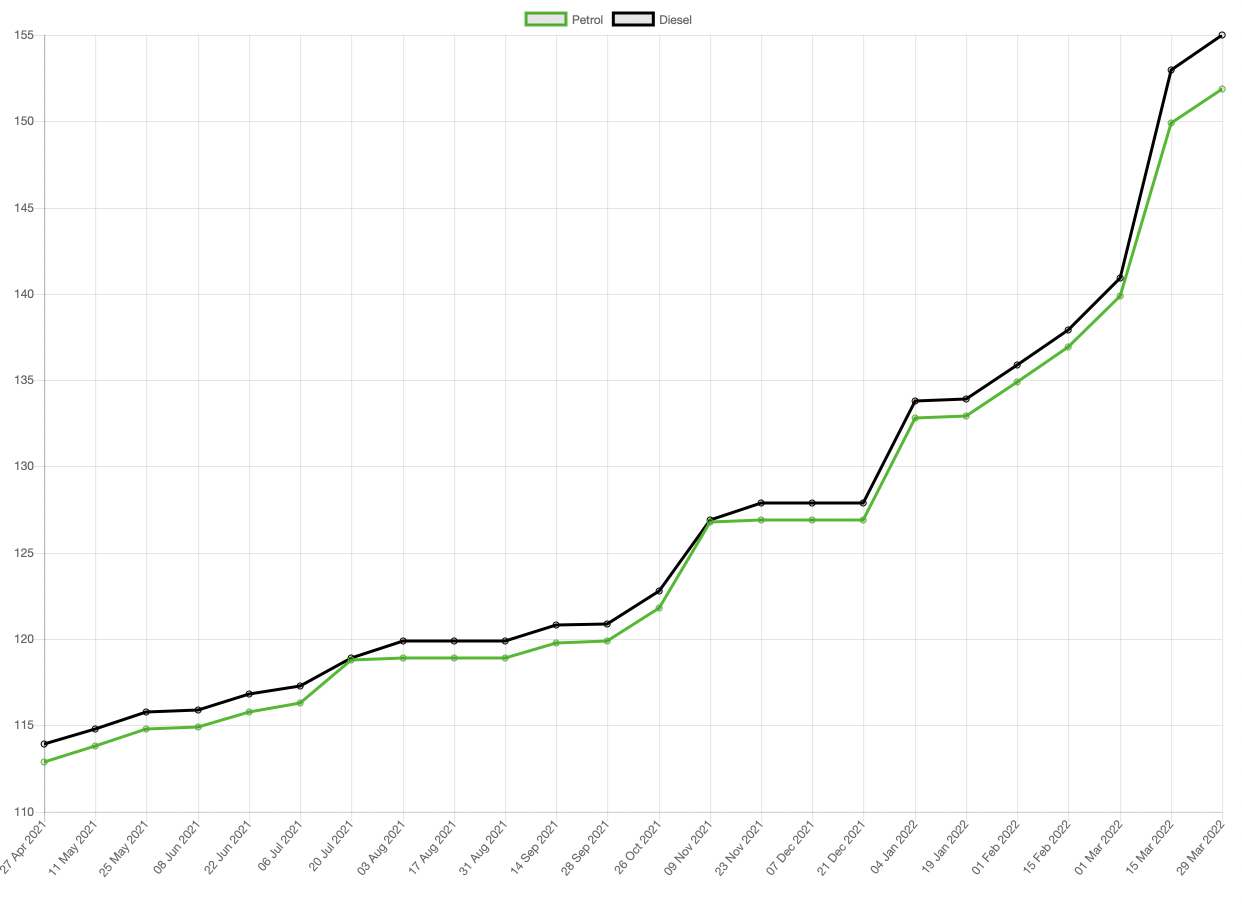 Jersey Consumer Council recently wrote to the Chief Minister to ask that 9p per litre be removed at the tills, while senior Minister Senator Ian Gorst said he thought that 10p should be taken off before the June election.

That day, Social Security Minister Deputy Judy Martin announced that the poorest 11,000 islanders would receive an extra £5 per week for the rest of the year to help with the costs of fuel and basic goods, but the Consumer Council said the sum “isn’t even going to touch the sides for most people, and will be quickly swallowed in a single carrier bag of food groceries.”

This morning, Senator Kristina Moore was due to ask States Members to vote in favour of increasing the Community Costs Bonus by 8%, and for that bonus to be extended to anyone who pays income tax at the marginal rate, and all islanders who receive Income Support.

However, she announced this morning that she had spoken to the Social Security Minister and accepted her commitment to create a project team to look into the Community Costs Bonus and withdrew the proposition. 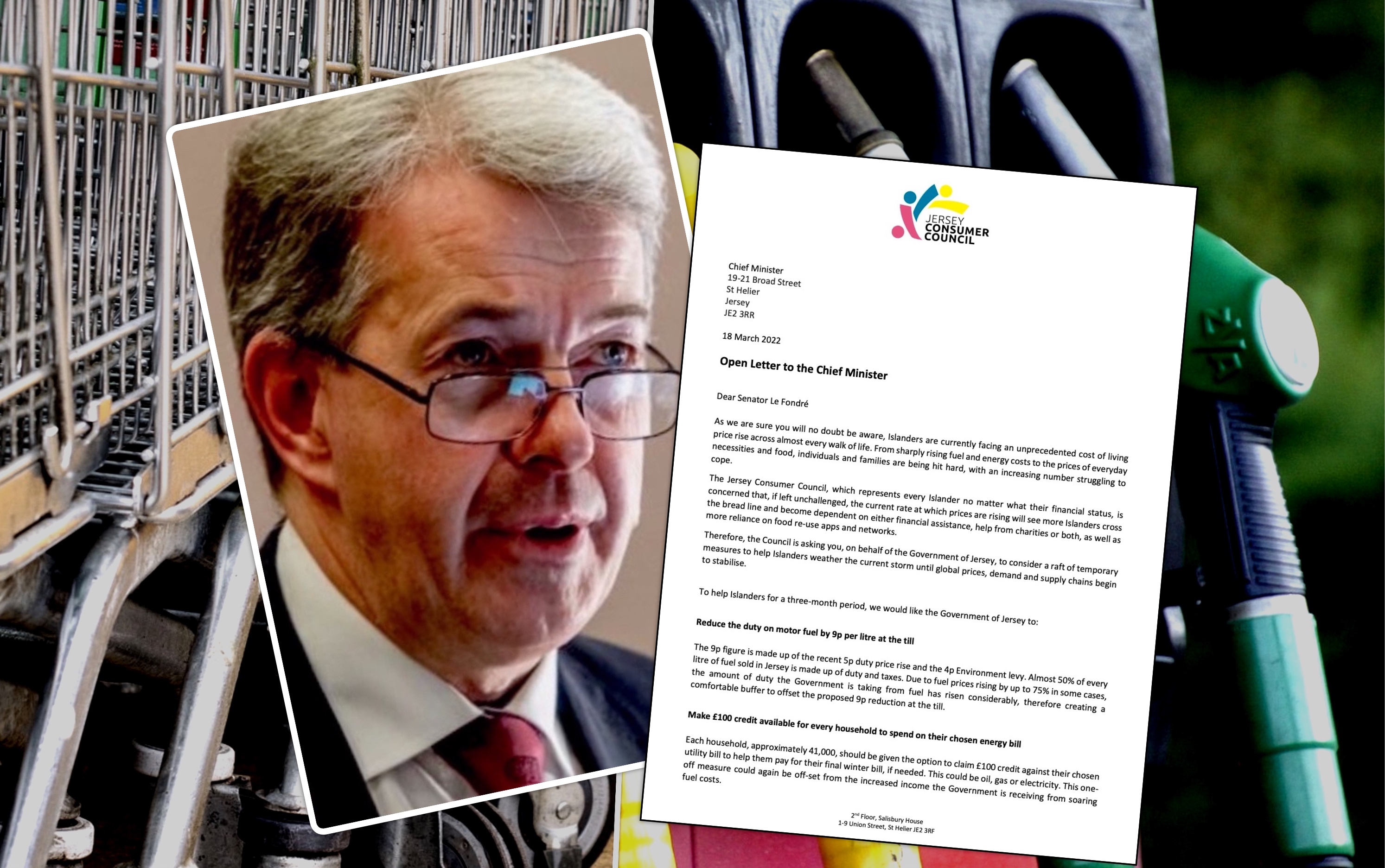 Pictured: The Consumer Council recently wrote an open letter to the Chief Minister asking for urgent action to help islanders deal with rises in the cost of living.

Deputy Pinel said this week that the Treasury were considering all of these options.

Posted by David Moon on Mar 31st, 2022
Is it not time to open up the retail market to European Supermarket Groups to access supply lines from europe and provide competition to the monopolistic market in Jersey dominated by Sandpiper(C.I.) Limited which holds all the Jersey franchises for UK supermarkets.
Posted by Michael Tostevin on Mar 31st, 2022
What happened to the rainy day fund......it's pouring in the real world and not just for the low earners!
Posted by David Kingham on Mar 31st, 2022
Remove the immoral 5 % GST on Foodstuffs and everyday essentials
Posted by Neil Little on Mar 31st, 2022
#killGST
Posted by Neil Little on Mar 31st, 2022
I think the politicians need to have a word with the supermarkets over here. The cost of food really is quite ridiculous and no family should choose between food or heating
Posted by Jon Jon on Apr 4th, 2022
Our government are clueless as how the other half live.A number have properties leased out,many are on their pensions plus their fifty grand a year .There not struggling at all. Many middle earners are now!
To place a comment please login Login »

A taste of Paris arrives on King Street